Thanks, American Airlines. Now I don't know what to do!

Greetings from 36,000 feet above and slightly to the west of Liverpool, England, as we're on the second (and longest) leg of our journey home. I'm ensconced in my usual window seat, watching (to paraphrase a great American philosopher) the world go by. Normally, I have this routine on a flight home. I load up on things to kill the eight hours--a Vanity Fair, a couple of episodes of the old radio show “Yours Truly, Johnny Dollar” on my iPod, a British newspaper and music magazine, some logic puzzles, and, of course, the writing of this.

But this time, it's different. This time, I'm flying on one of American's new 787 jets, which have personal seat-back entertainment systems full of movies I've not yet watched (“Creed”, “Kong: Skull Island”), as well as classic flicks I could watch over & over, like “Casablanca”. So what do I do? The usual routine? A new routine? A combination of the two?

Loraine says it's a good thing “The Martian” wasn't one of the movies offered. Otherwise, my head might explode.

We woke up at 4:20 Central European time this morning; it's now 1:41 pm British time, we expect to be in Chicago at 2:46 Central time, and then home at 8:48 pm Eastern time. So we'll have been in or flown over seven different time zones in the 22 hours of this journey; the only hitch so far was the 45 minute wait to get through security at Dusseldorf. They had one line open for every single person flying out, and trust me—there were a lot of people flying out. This was the first time we've flown through that particular airport, and I have to admit I wasn't that impressed with it. In fact, that may have been the only disappointing thing about the entire trip.

And if that's the case, I guess I don't have a lot to complain about, right?

Okay. Yesterday, I had promised the conclusion of a story that began Thursday in Freiburg, when I took this picture-- 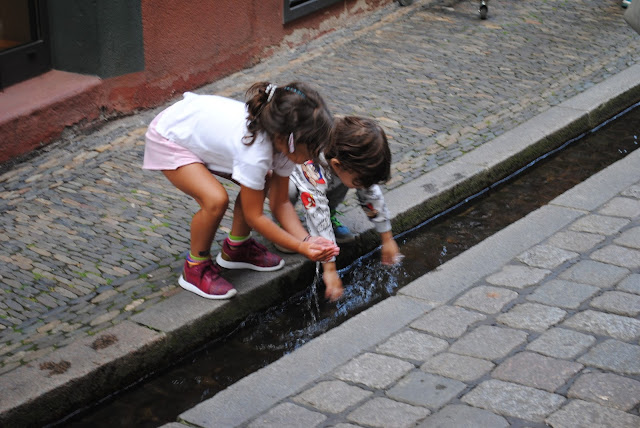 A picture of two kids playing in the Buchel in Freiburg. You may then recall that a guy ran after me, and after using hand signals and the few words in German I understand, I figured out that he was asking me to e-mail him a copy of the picture. I did, and Friday night I received this e-mail in return--

As I think I might have mentioned the night it happened, but one of the things I love about travel is that you never know what you're going to experience. This was certainly one of those cases.

I'm a bit surprised that Antonio didn't speak English; after all, it is rapidly becoming the default language of the world, and I know that it seems almost everyone in Germany uses it in their daily lives. Heck, even nightclubs use English in their names--

In all the years we've been coming here, we've noticed that more and more Germans are becoming Americans, not only in their use of language but in their attitudes and their ever-expanding waistlines. When we were driving along the Autobahn yesterday we came across an exit where you could stop, rest, and grab a bite to eat at any one of three fine German restaurants.

Those three? KFC, McDonald's, and Subway.

Oh—and another way we've been noticing Germans (and other Europeans) slowly morph into Americans? Pickup trucks. Our first few trips we never saw them; after all, with gas prices the way they are over here it costs a fortune to run them. But over the past several years that's changed, and we've seen more and more of them on the (very narrow) streets of Europe. 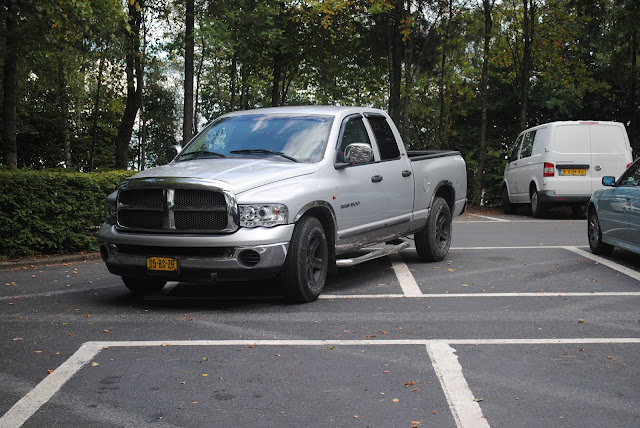 Now, on to the sentimental part of the trip—my annual picture of Mallory. Those of you who've been reading these forever know that when I went over the first time (when Mal was 6) she was disappointed that she couldn't come. So I took a book mark with her picture on it and took a photograph of it so she'd know that she did indeed actually go to Europe. Well, I've done it every trip since, and the first question that the now 20-year Mallory will probably be asking me is “Did you take my pictures?” 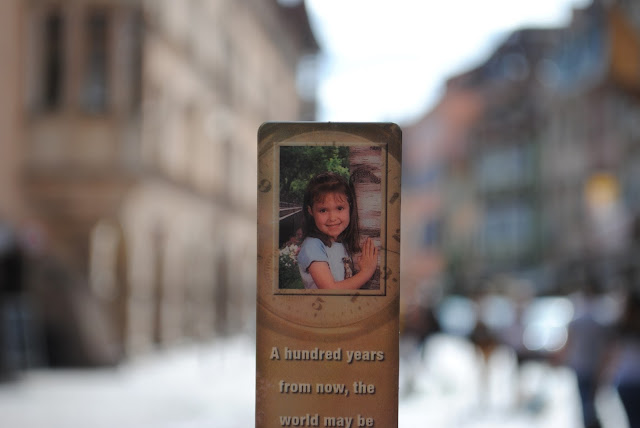 I took it while we were walking around with our friend Oliver in Colmar, who knew exactly what I was doing. So Mallory, not only did I take your picture, but people in France know what I'm doing and why I'm doing it!

They're about to serve lunch, so I suppose I should start to wrap this up. I always feel a tad melancholy when we're on the way back home, a feeling that's no different this time, if only because we had a really fantastic 10 days. I'm gonna miss the cows-- 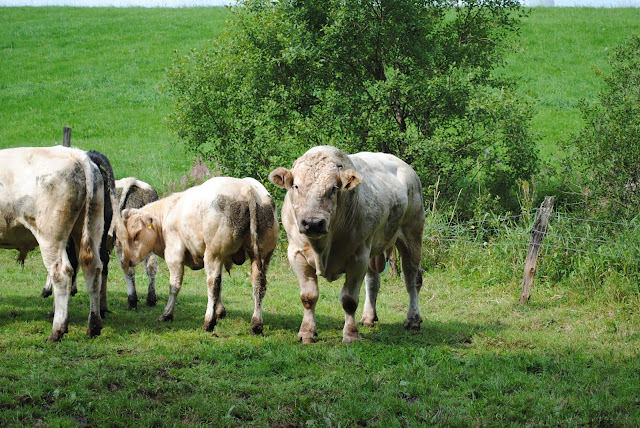 The brightly colored buildings all throughout Luxembourg... 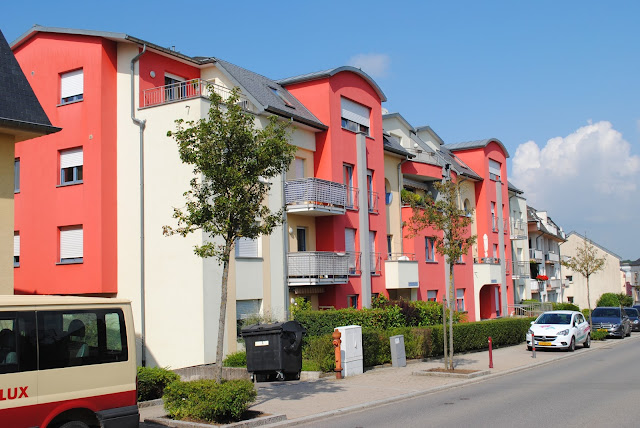 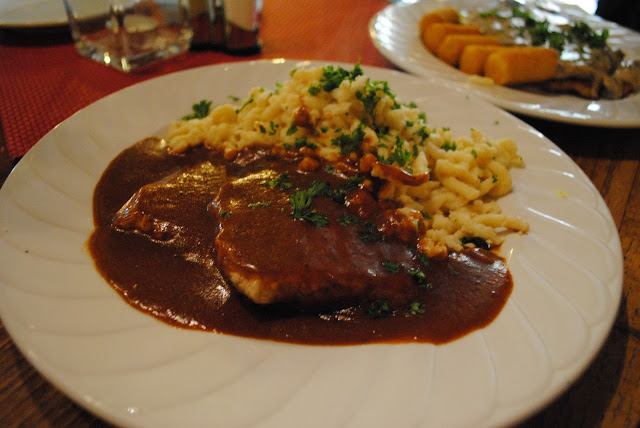 The statues that give you food-- 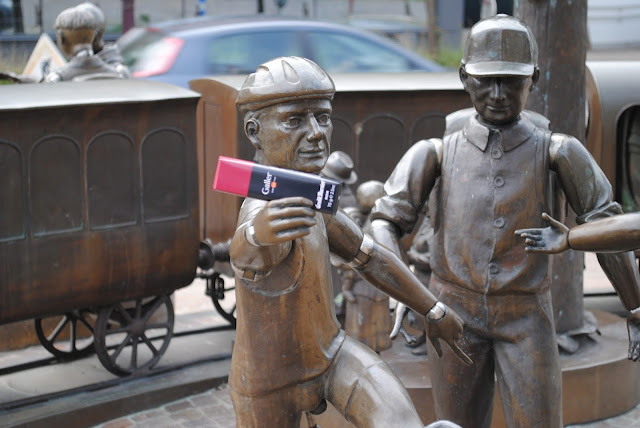 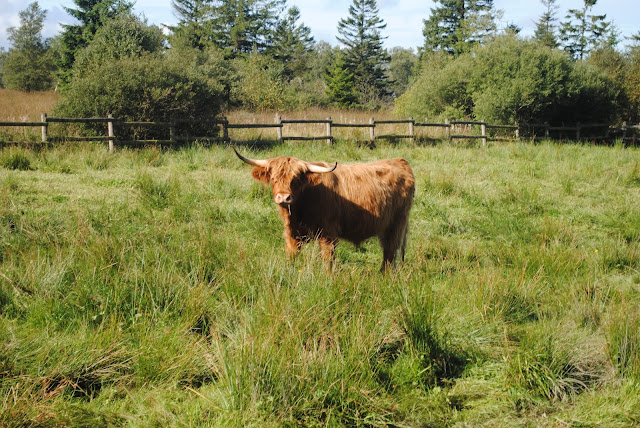 And, perhaps the most, I'll just miss the overall joie de vivre and quirkiness that you find in Europe. As an example I present this picture from Freiburg-- 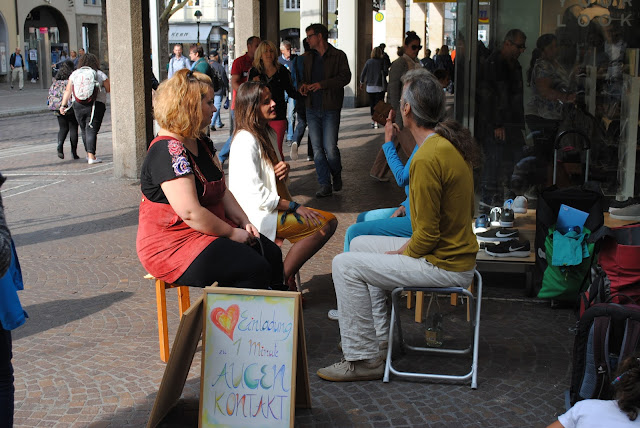 You know that old Monty Python sketch where a guy goes into a clinic and pays to argue with someone? Well, that's what this was—a street-side argument clinic, where you could pay a college student to debate with you for however long you paid.

A Monty Python sketch come to life on the streets of Europe. You don't see that if all you do is stay home

Thanks for following along and traveling with us the past week and a half. We hope you were entertained and even learned a little something. I know we both did. If you're so interested, I write these on a daily basis for work; you can check it out if you'd like (although usually with fewer cows and absolutely no Monty Python sketches come to life). We're kind of thinking of going back to Germany and following in the footsteps of strange king Ludwig II next year. We hope you'll come back and join us!