Here at the Western (Part of the German) World

Instead of wondering if it's possible, maybe I just need to look at it as a giant game of Tetris. But with chocolate instead of blocks.

Greetings from Dusseldorf (or, to be more specific, Ratingen, where the hotel at which we're staying is located). We spent most of the day driving, sometimes even at the posted speed limit (more on that later), and after several stress-filled incidents at the not very user-friendly Dusseldorf airport (“What do you mean there are supposed to be hubcaps on our rental car? There weren't any on it when we picked it up!”, wi-fi that did not work, an idiot who forgot how to dial a German number on his phone, and an information desk that didn't provide too much information on how we were supposed to get in touch with our hotel shuttle), we are now settled into our final destination, where packing for the trip home awaits, as does a (gulp) 4:20 am wake-up call.

Just for perspective, 4:20 am here is 10:20 Saturday night in Marquette. We're scheduled to fly into Marquette at just before 9 Sunday night. You do the math.

On our way out of Heidelberg we needed to do one final research stop for Loraine, and that was to visit the small town where this guy-- 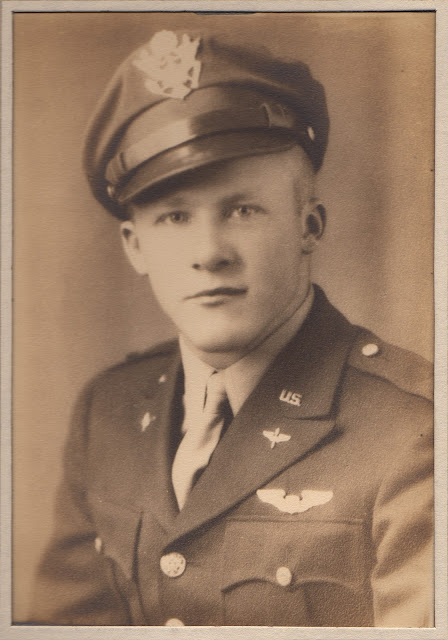 Ishpeming's Lawrence Ryan, was killed when his fighter plane was shot down in Uelversheim on December 12th, 1944. According to Army records, Ryan's body was buried in the local cemetery after his plane crashed, buried at approximately this spot. 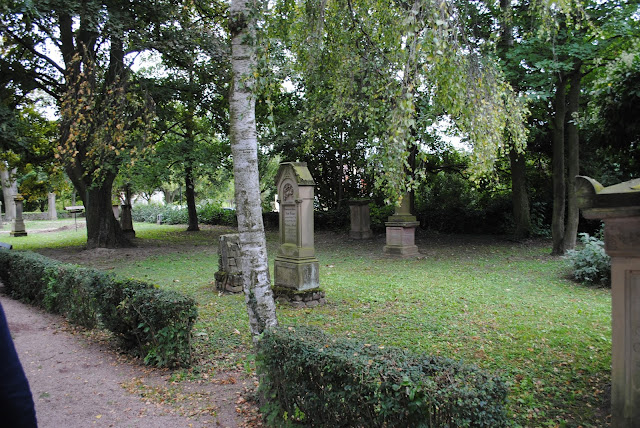 He was interred there until the end of the war, when he was then temporarily buried at the St. Avold Military Cemetery in northern France. From there, he was sent home to Ishpeming and his final resting place in 1948. 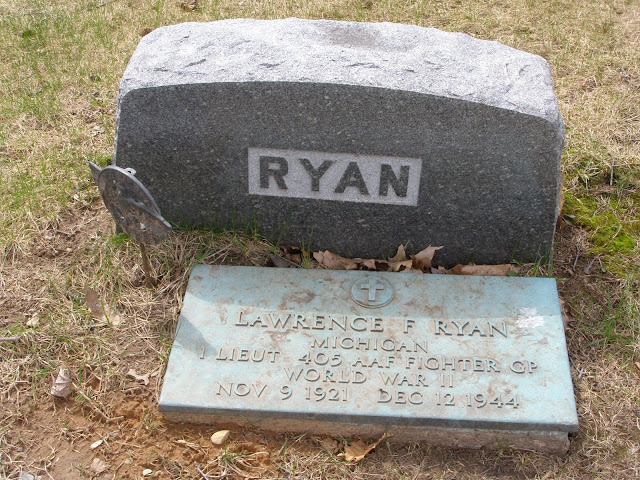 Lawrence Ryan has an interesting story. Both of his parents died during the Depression, and he and his siblings were taken in by an aunt and uncle. One of his brothers was sent to the Orphanage in Marquette, while Lawrence was taken under his uncle's wing, ending up as a student at Michigan State before enlisting in the Army Air Corps and becoming a fighter pilot with the 405th Fighter Group based out of Normandy.

He was killed during what we believe to be a dogfight in the skies above Uelversheim; we just wanted to pay our respects.

Otherwise, like I said, the day was spent driving. Speaking of which, here's your traffic jam picture for the day-- 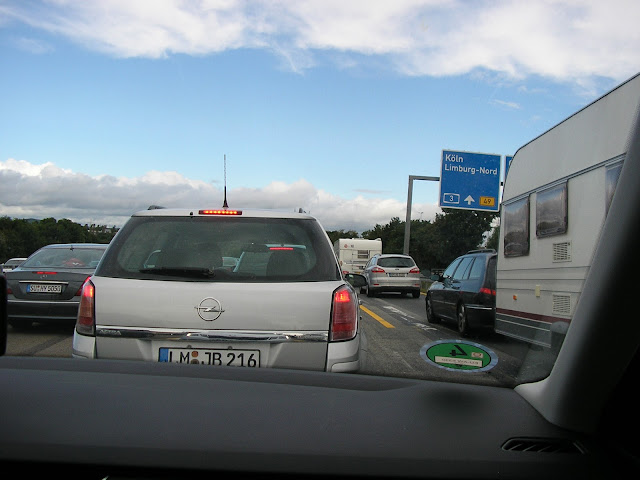 If you think that's bad, we consider ourselves to be quite lucky. Traffic going the other way was backed up almost five kilometers thanks to a traffic accident. And it was especially bad because it occurred in a construction zone, where one whole lane of traffic (the one where the accident occurred) had a three kilometer long ling of cars just stopped between concrete barricades with nowhere to go.

It wouldn't' surprise me if they're still sitting there.

In non-driving news, everywhere you go in Germany, you see signs like this-- 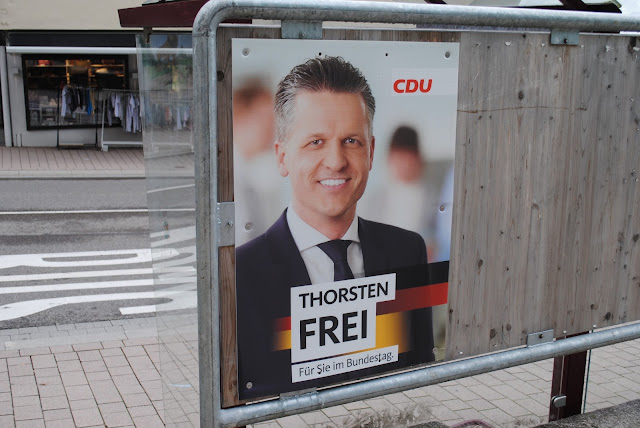 Unless you see the signs its hard to tell that the country has its federal elections in just a few weeks. That's right; the Bundestag and the Chancellorship are up for grabs, and all you see are these small signs everywhere. There are no negative TV ads, no PACs, no unregulated or unlimited or corporate funding, no nothing. Just small signs, debates, and a vote.

It's quite the change from what we're used to.

Okay; now the chocolate Tetris puzzle. As you may have inferred by reading this the past nine days, I bought a little chocolate. And when I say “little” I actually mean that I've been carrying a reusable and quite sizable grocery bag originally intended to haul groceries in that's now full of chocolate. In fact, THIS much chocolate-- 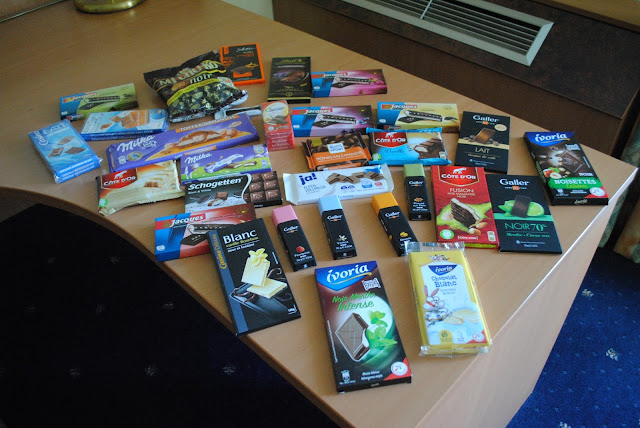 Don't worry; it's not all for me. In fact, only about half of it is mine. The rest is for friends and family. The key is getting it home safely (and under the 50 pound luggage limit), and that's why both Loraine and I have plastic containers that were filled with items we can discard after tonight. Out goes the sunscreen (like we actually needed sunscreen over here this year) and the dental rinse, in goes the chocolate. Some of the containers, filled with delicate and tasty bars, then go in our carry-ons, while the more solid bars get stuck in our luggage. That way, the chocolate makes it home safe and we stay under our luggage weight limit.

The puzzle, of course, is trying to fit the maximum number of bars in any one containers. As I said, it's like Tetris game, except with chocolate. Wish me luck.

Since 430 comes early I suppose I should wrap this up. I'm sorry I don't have any weird pictures to share today. I didn't have the chance to take many, weird or otherwise. However, I do have quite the backlog built up from the past nine days, and since I have nine hours on an airplane tomorrow and not much to do I'll write a big one filled with pictures (as well as the conclusion to the story about the guy who ran up to me in the street and wanted me to send him a picture) and then post it when we get to Chicago.

Assuming, of course, they let us back in.

Finally, I know I do this every year, but I really have to bow down in thankful awe to the most amazing woman in the world, the woman who put this trip together from scratch and discovered all the incredible things that we've been doing. Every year Loraine tops herself in this department, and I can't wait to see what she comes up with for next year.

(PS--for those of you who don't know, all of the titles of the blogs since last Sunday (including today's rather unwieldy one) have either been or have referenced Steely Dan song titles, in honor of the late Walter Becker.  Most of them have come off the top of my head (or the top of Loraine's head); for today's title we needed Google's help.  So thanks, Google!)
Posted by Jim & Loraine Explore Europe at 12:47 PM