I don't think we've ever been to Germany without getting stuck in a traffic jam. And I'm (ahem) glad to stay that our streak is still alive.

Greetings from Heidelberg, where we're sitting in a hotel room not more than 100 feet from the Neckar River, which cuts through the city. It's our second time in Heidelberg, the first visit being on the trip with our parents two years ago when our luggage didn't arrive. While they explored Heidelberg, we shopped for toothpaste and underwear, so we tried to make up for it today by walking up & down streets and hills to get the lay of the land.

Of course, first we had to get here. It's not that far from Freiburg to Heidelberg, at least as the crow flies, but it always seems that Germany's vaunted autobahn system isn't always so vaunted when we're on it. Every single time we've come over here we've had at least one instance where we just get stopped in traffic and have to sit there. That was the same today, as we made it to not more than 20 kilometers from Heidelberg before having to stop because four different freeways merged into one and no one wanted to let the person in front them go. 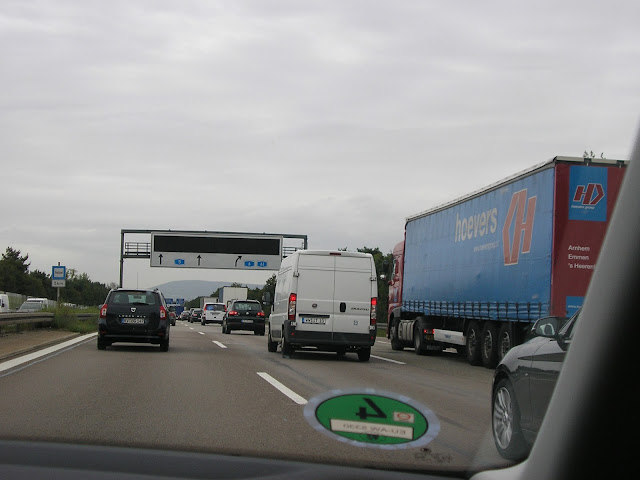 I don't know if it's like this every day or if we're just lucky, but it's nice to know our “streak” is still alive.

(And as an aside, isn't it a pity that sarcasm doesn't travel well with the written word?)

But we made it here, and did a little walking before our big task of the day. What can you see in Heidelberg? Well, how about another cool pedestrian area-- 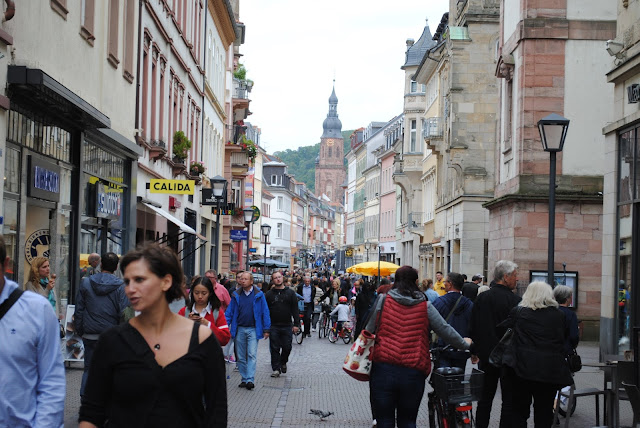 Another bunch of cool sandstone buildings-- 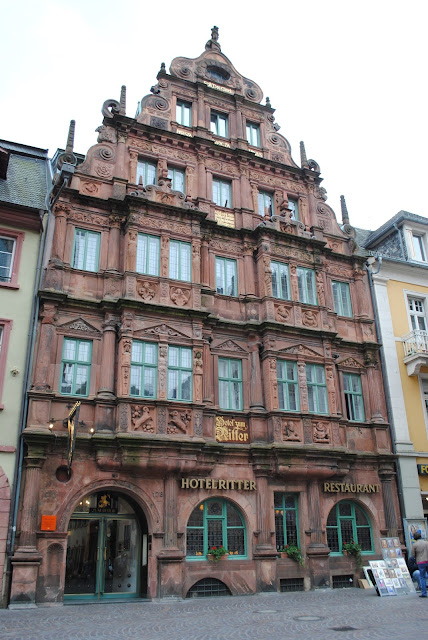 A statue with a bird on its head-- 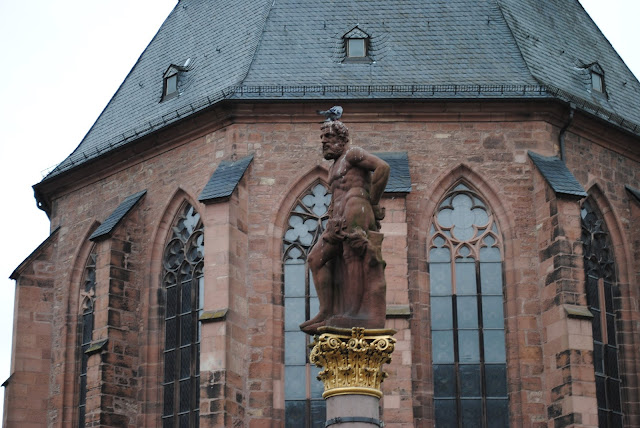 And a very cool restaurant where we had some schnitzel. On the wall of the restaurant were pieces of currency signed and left by guests from all over the world-- 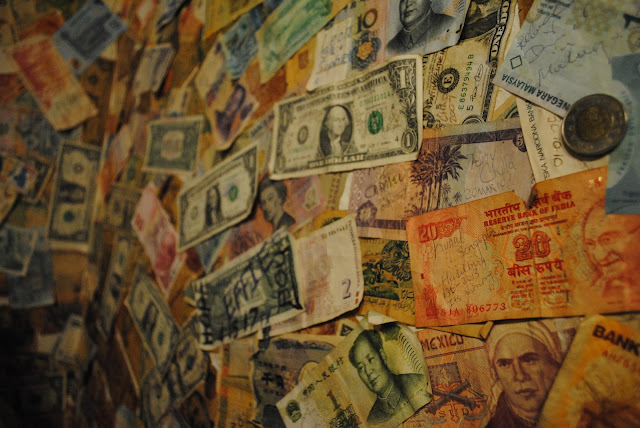 For a geography nerd, it was a fun way to kill the time waiting for your food.

Now for our big task for the day. Heidelberg has three very famous sights—the river, the old castle that sits on a hill up from the river, and the bridge that crosses the river, the Alte Brucke. They're all renowned attractions, and they're places that everyone checks out. Loraine figured out that there was a way to visit them all in one fell swoop, and as a bonus, it involved hiking up a hill. 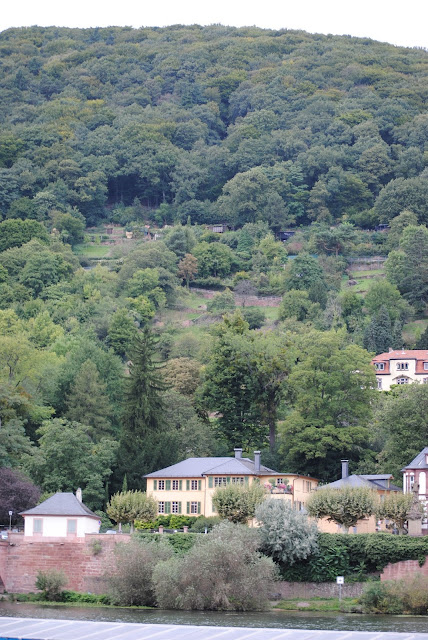 If you look closely, you'll see a trail cutting up through the woods in the center of the picture above.. That's the trail that's almost a kilometer long and is very steep. How steep? 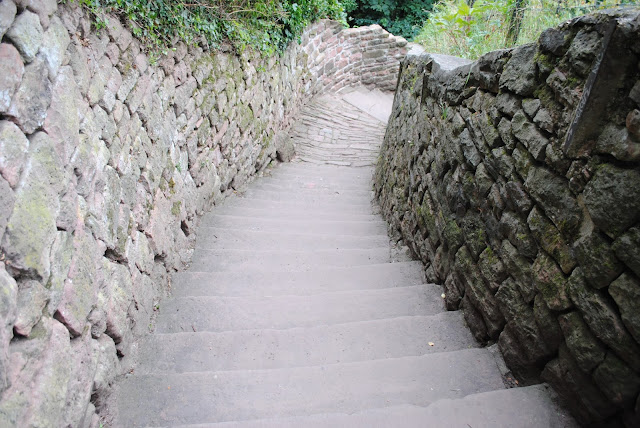 Really steep.  Much like the trail we climbed in Freiburg Wednesday, it's taxing. In fact, we saw many people stop along the way and try to catch their breath. But in the end it was worth it. Not only did we get in our workout for the day, but as promised we saw all big three sights of Heidelberg in one fell swoop-- 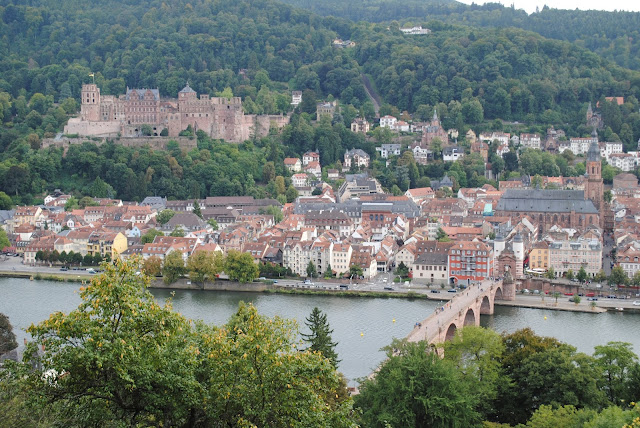 There you go—the castle, the river, and the bridge across the river. And all it took was a 20-minute climb and the burning of about 500 calories.

But then, after what we've been eating the past 8 days, we probably have those 500 calories to spare.

Once you get to the top of the climb, you're on the Philosopher's Way, which was once a path along which you could take contemplative walks but now is used by hikers, runners, and mountain bikers. However, there are still benches along the way, and you could actually see people sitting down, just staring out, and wondering about their place in the universe. 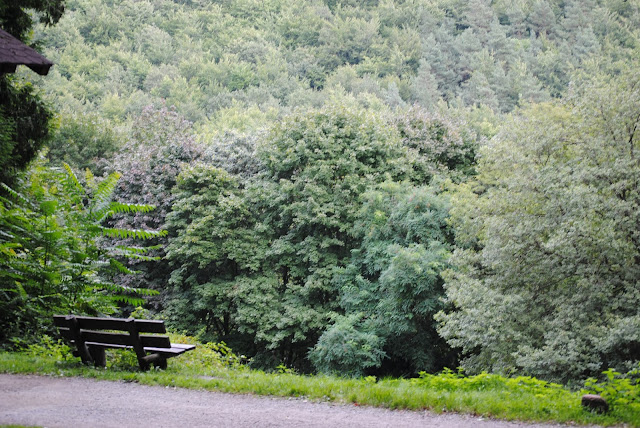 I highly doubt many tourists make the climb, but it's definitely worth it.

We didn't see any real animals today, but we did see a giant inflatable pig-- 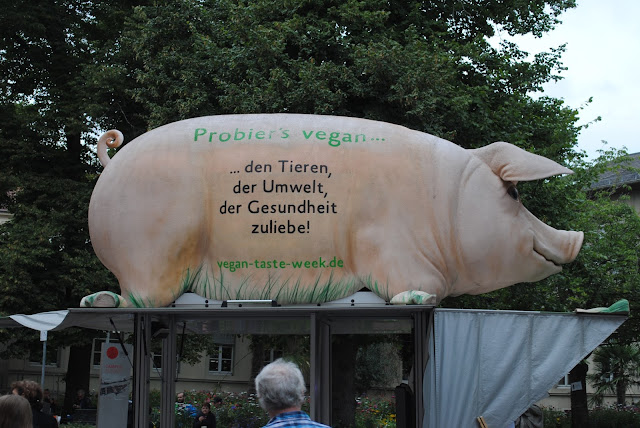 There was a group trying to talk to people about the benefits of a vegan lifestyle on the street. I'm just not quite sure about the logic of using a giant inflatable pig to attract people's attention.

But maybe that's just me.

Next--spelling mistake or major trademark violation? Discuss amongst yourselves-- 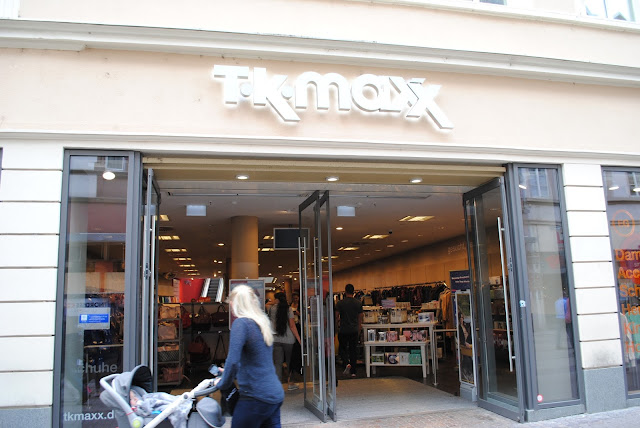 And since almost everyone here speaks English, you see signs, billboards, and items for sale everywhere in the language-- 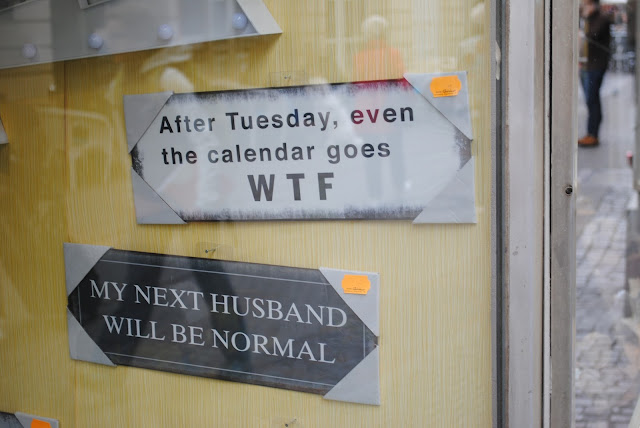 I think the bottom of the two is Loraine's hope for the future.

Tomorrow, sadly, we wrap things up be heading back to Dusseldorf, returning the rental car, and figuring out just what the $*%^&#$#$* we're gonna do with all the chocolate we've bought. We also have one last research thing for Loraine...assuming we can find a cemetery in a small German town.

And with that, here's one last picture of the castle in Heidelberg-- 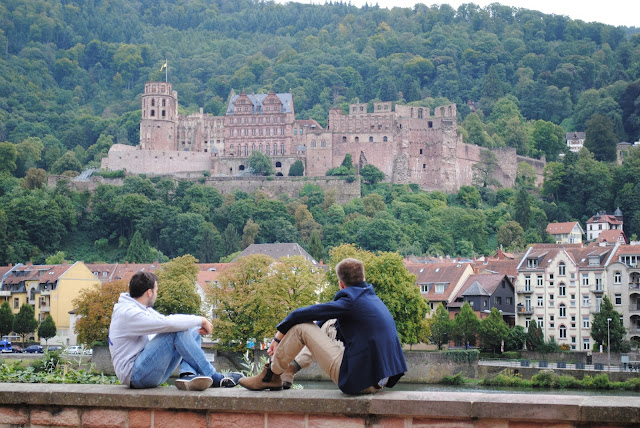