Loraine's not crazy. She just wanted everyone to know that.

Greetings once again from Bastogne, where, to quote the title of my favorite “M*A*S*H” episode ever, we had a “full, rich day”. We probably put 250 kilometers on the car exploring and visiting various parts of this area of Belgium, and came away from the experience with everything from cows to (sadly) road construction to perhaps the most unique lunch we've ever had.

But let's start with one of the most important reasons we come here, and that's for Loraine to do a little research and for us to honor those from our home area who paid the ultimate price during World War II. To that end we made a stop at the Henri-Chapelle American Military Cemetery right outside the cute little town of Henri-Chapelle, and said “hey” to the seven men from Marquette and Alger Counties who are among the 5,000+ people buried here, including Marquette's Harold Crawford. 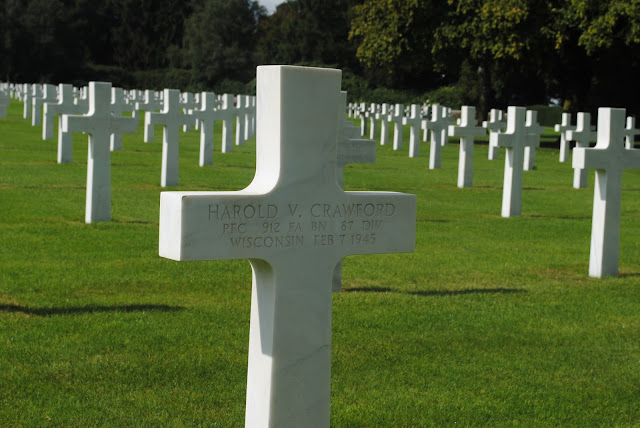 Despite the fact that his grave marker says he was from Wisconsin, he was born & raised in South Marquette. He was a member of a field artillery battalion and died in early February, 1945, as the Allies were making their final push in Germany.

In a strange way it's sad; whenever we go to an American Military Cemetery that's not named Normandy we're usually the only people there. And with the exception of an elderly Belgian couple out for their daily stroll, it was the same way today. So make me a promise—if you're ever in Belgium or eastern France and happen to see a sign for one of these cemeteries, stop by and pay your respects. The people buried there deserve it.

The area around Henri-Chapelle is beautiful; in fact, you ooh and aah as you drive around every corner and are greeted with views like this-- 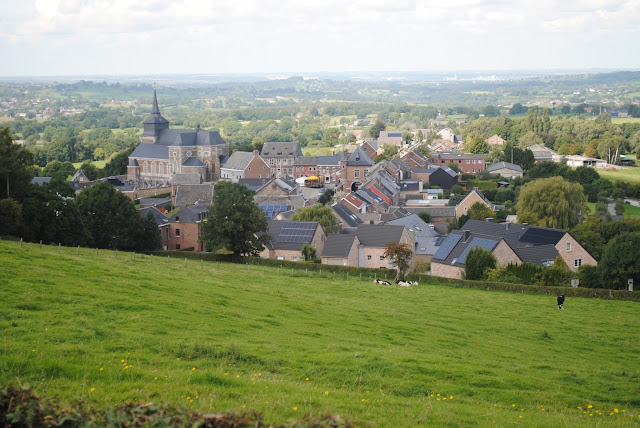 Not only that, but you also know what happened there a couple of months ago? The Tour de France rode through, and they decorated the place with bikes everywhere-- 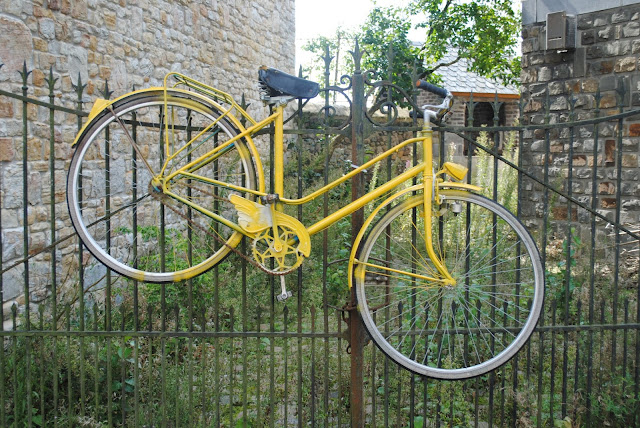 If you were reading these last year you may remember that I may have gone slightly overboard in taking and posting pictures of towns decorated up for Le Tour. Well, I promise not to do that again this year, if only because we aren't planning on passing through anywhere else where the race went. Of course, I said that several times last year, and ended up breaking my promise each and every time, so take this year's promise with whichever grain of salt you would like.

Before we left I wrote that one of our main objectives this year was to avoid any road construction. Sadly, that wasn't the case today, as we visited several towns where streets were dug up & closed to such a degree that it even made Marquette look like there was nothing going on (and for those of you who don't live there, almost every street in our home town is undergoing some kind of work or expansion this summer). I'm referring to the towns of Eupen and Chaudfontaine, which I'm guessing we could've totally avoided except for one small fact--

Those were the towns with the chocolate stores we wanted (nay, needed) to visit. Eupen's home of the Jacques Museum and outlet store-- 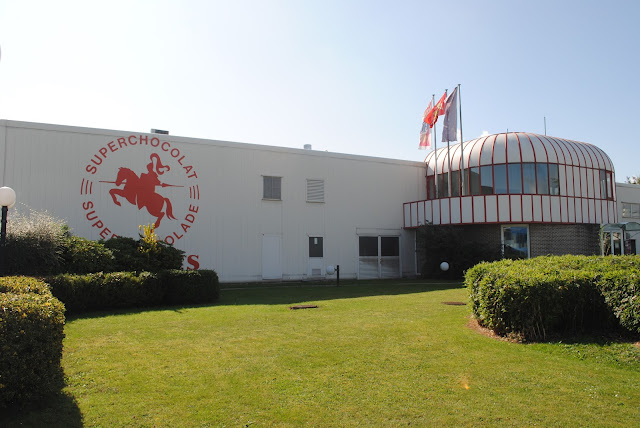 While Chaudfontaine is where they make Galler chocolates-- 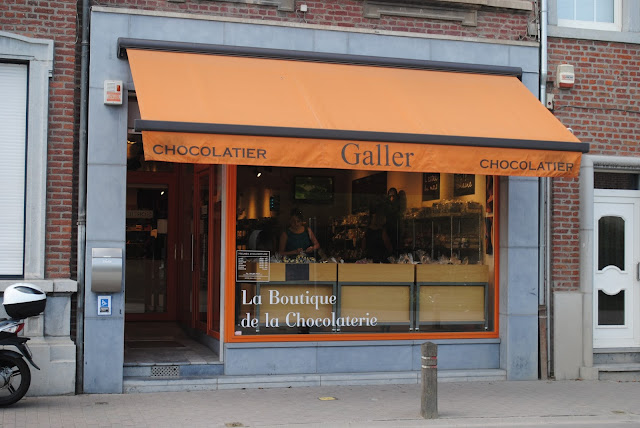 While they're both little pieces of heaven on Earth, we weren't expecting what we found at the Galler store. Not only do they sell the most amazing chocolate you may ever find, but every one of the chocolates they were selling had free samples, so you could try them out and see if you wanted to buy them.

Yup...a chocolate store with free samples. Guess what we did for lunch today?

I'm almost afraid to show you, but here's the damage we did (not including the free samples, of which we estimate we each had [gulp] 15 or 20)-- 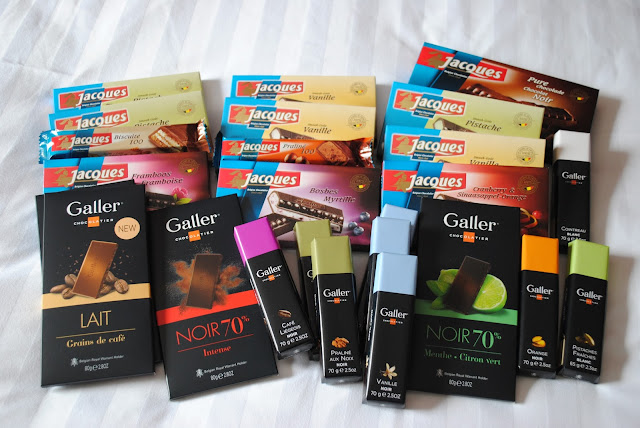 But, then, you only live once, right? And I have two weeks after we get back before my annual checkup and the cholesterol test that comes with it. That's more than enough time to undo the damage we did at “lunch”, right?

One bar that I do have to single out would be the Galler you see on the right hand side of the picture, the one with the white top.  It's a Cointreau Blanc, which is a white chocolate bar with an amazing cream filling made of Cointreau, which is an orange-flavored liqueur.  It just melts in your mouth and leaves it coated with orange-flavored yumminess.

About the only way you could make a day with that much chocolate even better is to add cows to it, and we were able to do that in spades. We got lucky today; the forecast called for rain all day, and aside from seeing a few drops here and there we were totally spared. However, when we stopped in Chaumont, the town where the subject of Loraine's book “Elden's True Army Tales” was killed, there were black clouds with bolts of lightning off in the distance. However, we were still bathed in sun, as were the cows right in front of us-- 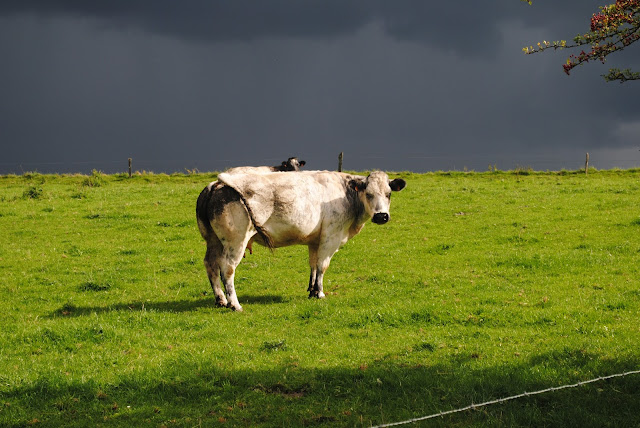 Those black clouds you see behind the cow? The thunder and lightning they produced sure must have scared the sheep in the next field, as they cowered en masse into a corner and started bleating louder than Metallica with an extra set of amps.

They were really loud.

Want another picture of another cow? Of course you do! 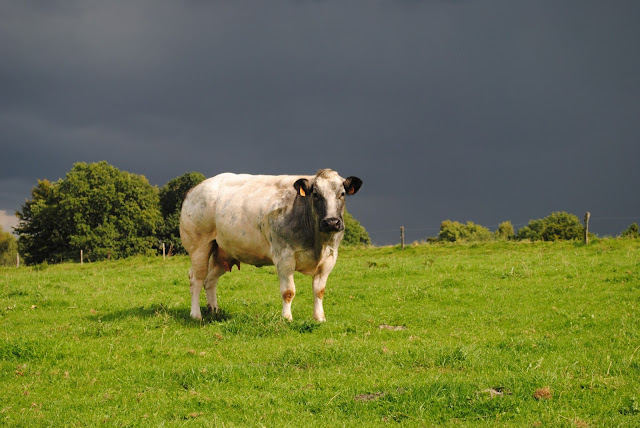 Okay, no more. I promise. Well, at least I promise for today...

Finally, the reason why Loraine's not insane. One of the things we wanted to do today was to check out a new memorial they have here in Bastogne, dedicated to Renee LeMaire and Augusta Chiwy, two Belgian nurses who took care of Allied soldiers during the Battle of the Bulge. LeMaire, in fact, died when the aid station in which she was serving was bombed, an event fictionalized for the TV series “Band of Brothers” (the same attack, by the way, that also took the life of Sundell's Leo Robinson). Anyway, the memorial was dedicated last December, but no one around here knew where it was. We did an internet search for it, and found nothing. That's right; even Google didn't know about it, and Google knows about everything. It was almost like the monument was never put up. Loraine, however, knew that she saw pictures of it once, so it had to exist, right?

Well, it took a little while, and a few Facebook messages to a friend of Loraine's in England who then got in touch with one of his friends over here, but in the end, we triumphed. Here's a picture of one very sane woman with the very under-publicized “Nurses of Bastogne” memorial-- 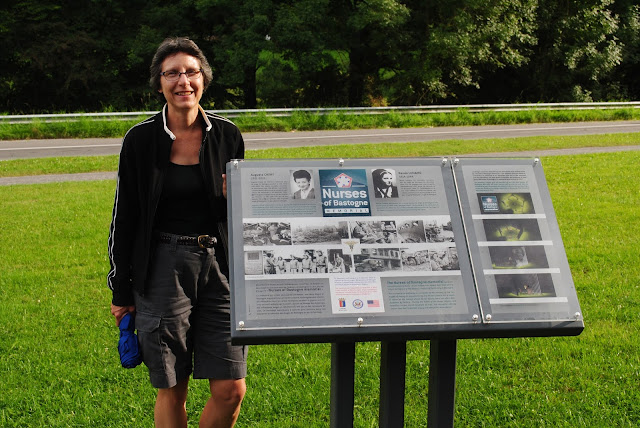 Now, hopefully, if someone ever does a Google search for “Nurses of Bastogne” memorial, hopefully this one blog will show up and prove to the world that it does it exist. Because it does.

And because Loraine's not insane.

Tomorrow, we meet up with a friend and tromp around in the woods. And, with any luck, eat a slightly healthier lunch.