Time Out of Mind

Loraine was savagely attacked by another hungry bird today. Only this time, it wasn't her fault.

Greetings from the French city of Nancy, where the sound of several dozen fountains that make up the “water garden” next door is gently wafting through our open window. It's the first of two quick days in one of our favorite countries, so we didn't have any time to waste. We made sure to visit the country's four major grocery store chains to get whatever chocolate (and cereal) we may need. That way, no matter what happens next, we're covered.

It's good to have THAT weight lifted off our shoulders.

Aho, from Jackson Street in south Marquette, was a member of the 35th Infantry Division, and was captured in the French town of Fossieux on October 8th, 1944. After that, he was shipped to a German prison camp in what is now Poland, where he mysteriously died, probably during a tank battle between the Germans and the Russians. His body was never recovered; we think he's buried in a mass grave at the site of the camp. And his name is listed on the wall of the missing at the American Military Cemetery in Margraten, Holland.

All in all, probably not the best way to visit several European countries.

Fossieux's a town around the size of Big Bay or Champion, with the major building being the local church. Since it's on high ground, it still bears the scars of the battle that October day-- 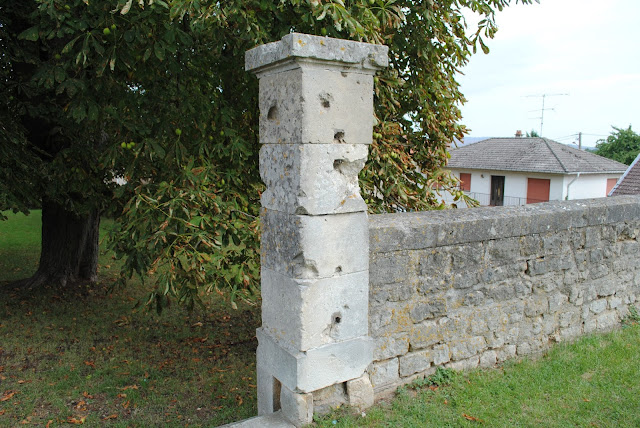 And while the Allies were ultimately victorious, that victory was before many prisoners, Aho included, were taken by the Germans. Fossieux was where his end began. But over 70 years later, the town still remembers, as evidenced by this sign at the town's Mayor's office-- 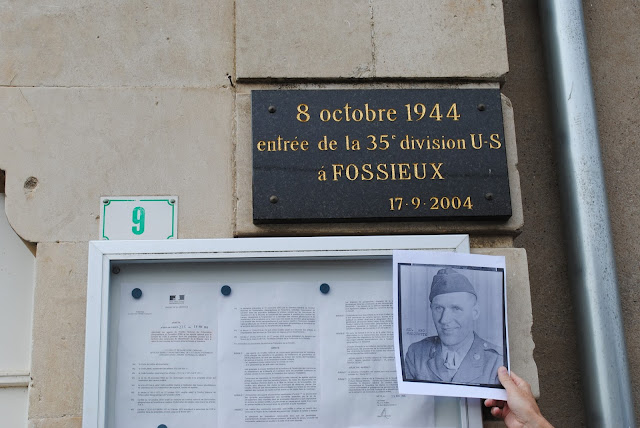 The sign was a nice surprise and a nice end to a quick visit to Fossieux.

Our next stop was Pont-a-Mousson, where we had two objectives. The first, disappointingly, was never fulfilled. When we were here three years ago we had perhaps the best dark chocolate macaroon ever baked, a macaroon so good we've spent the past three years dreaming about getting more. Sadly, the bakery appears to have changed hands, and the shop currently sitting there, at least today, did not have them.

For a few seconds, it was like our entire world view had shattered and there was no reason to keep living. Thankfully, we were able to recover from the tragedy & moved on. 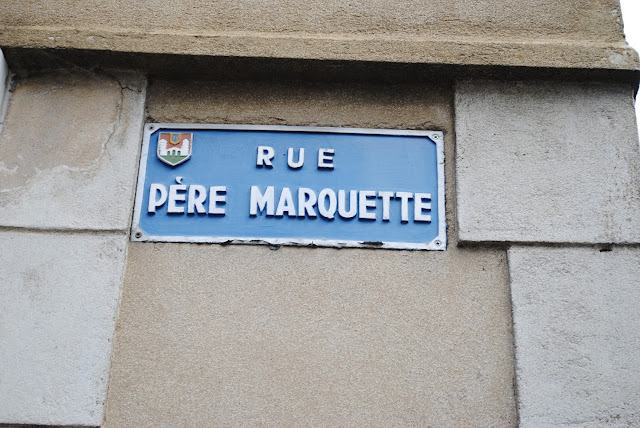 That's right; Jacques Marquette once called Pont-a-Mousson home. In fact, he did his seminary studies at this abbey-- 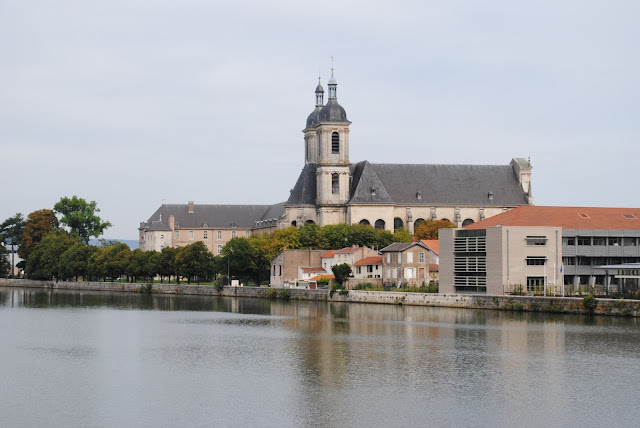 Which in modern times sits right next to this school-- 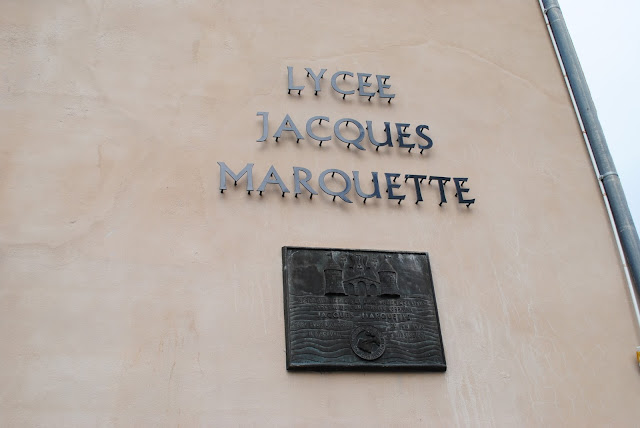 It's basically a combination middle school/technical college. The plaque talks about how he studied down the street and then went on to discover the Mississippi River. I had once been told that there was a statue of him similar to the one we have in downtown Marquette at the school. However, when I asked the people at the Abbey, they said that one didn't exist. They thought it was cool we came from the city named after him, but sadly could not provide the coup-de-grace for our visit.

Oh well. At least there's also a bus stop named after him-- 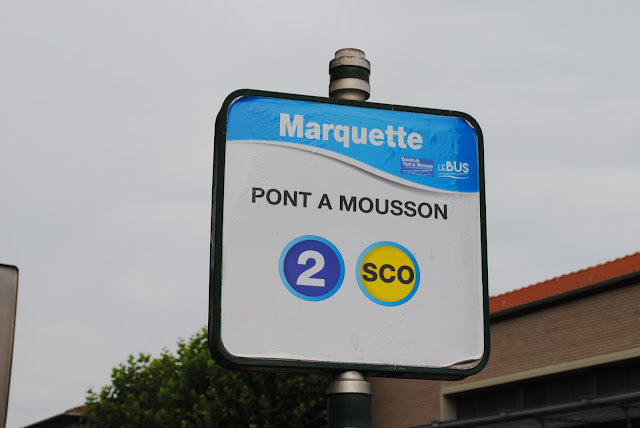 After stopping at those aforementioned grocery stores, we finally made our way to Nancy, a city of a quarter million people that's home to a UNESCO World Heritage Site, the Place Stanislas-- 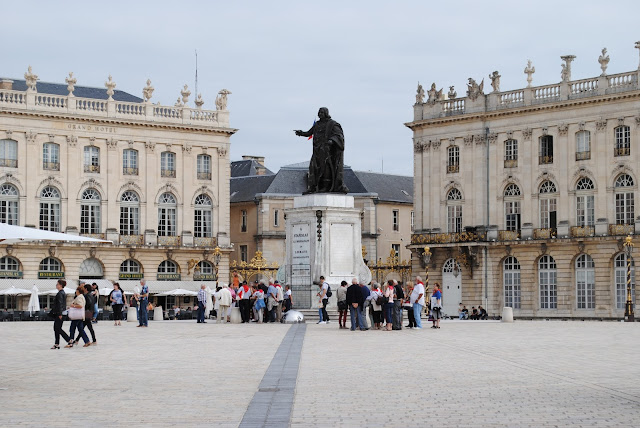 It's basically a big town square with a statue of Polish king Stanislas, who once ruled this part of France (I had always assumed he got it in a trade for a part of Poland and a draft choice to be named later.  Turns out the Polish people kicked him out, and since his daughter was married to the king of France, they gave him a little piece of land to call his own, once again proving that it's not what you know...)  On each of the four corners of the square there are these huge gates, filled with statues and lots & lots of gold-- 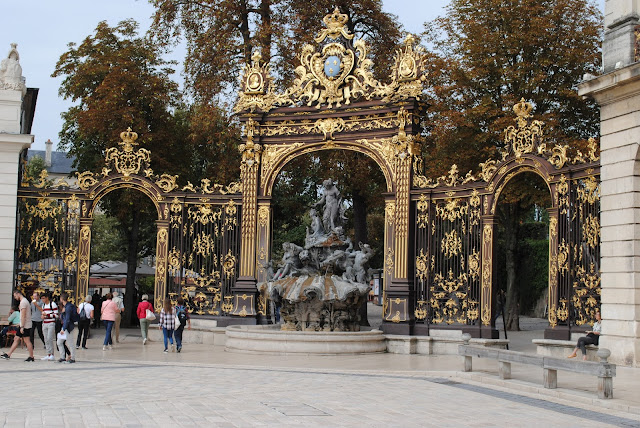 One of the gates leads to an amazing city park, the Parc de la Pepiniere-- 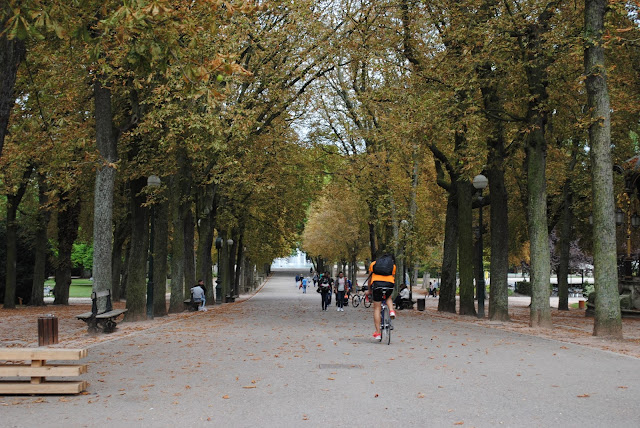 And that's where Loraine found herself under attack for the second day in a row. To explain, let me share a little backstory. The first time we came to Europe we had a little date night at an Italian restaurant, and we've carried on that tradition ever since. Three years ago, we picked some Italian takeout and ate at the park's Rose Garden. Unfortunately, like the macaroon shop in Pont-a-Mousson, the take-out place was no longer around, but we were able to pick up a few slices of pizza (and a white cheese tart) from a bakery nearby. It, actually, was quite good-- 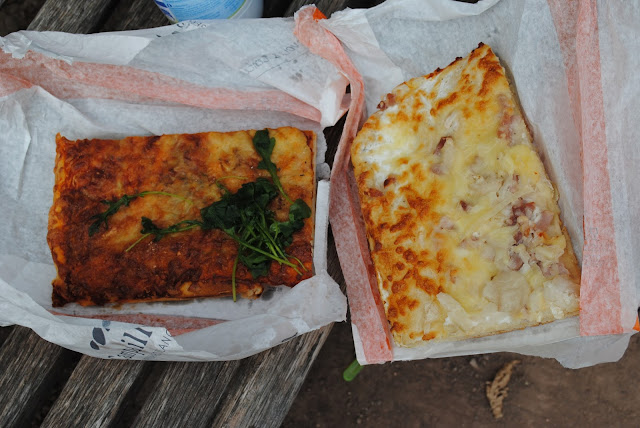 So our date night was a go. We sat at one of the benches in the park, and proceeded to eat. It was then I noticed a peacock walking around-- 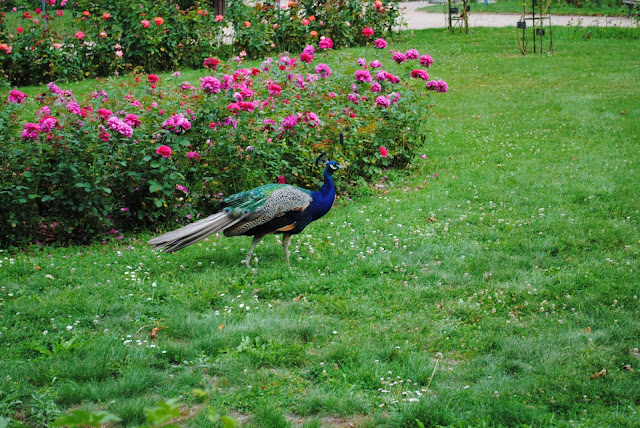 They have peacocks in the park; they're part of their zoo, and part of the charm of the place. So we were just sitting there, looking at the peacock, when it noticed we had food-- 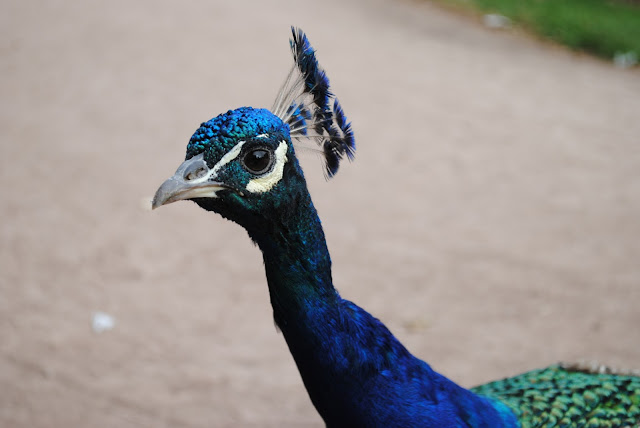 Slowly but surely, it locked into Loraine's slice of pizza, and started moving toward her with as much menace as a peacock could muster. And while my action photography skills probably aren't up to par (this is, as far as I know, the first peacock attack I've ever shot), pretty soon Loraine was having to defend her dinner against one hungry bird. 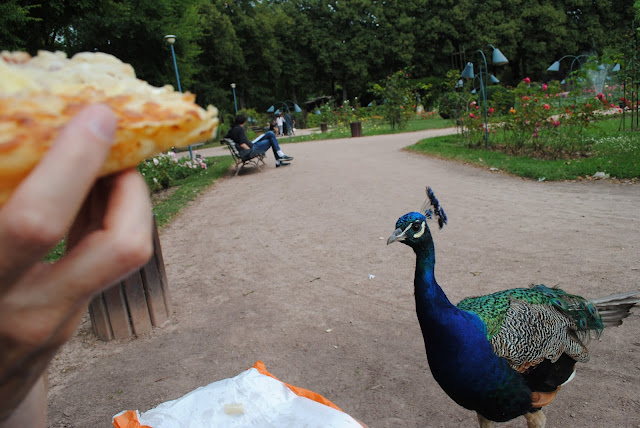 Thankfully, Loraine prevailed in the fight, and we were soon saved by the  intervention of a group of four year olds brandishing imaginary light sabers against the bird. Here are our heroes soon after the rescue-- 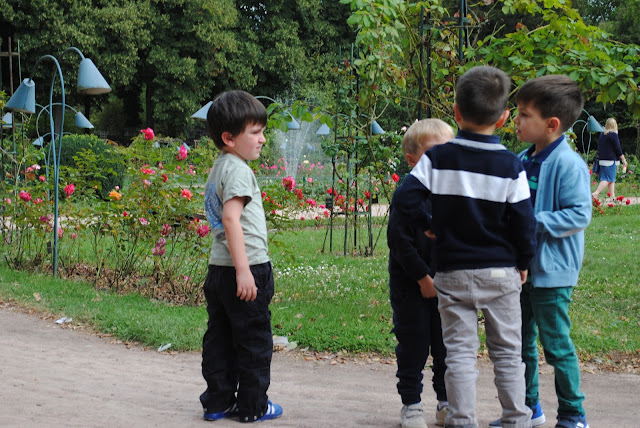 You know, we've done a lot in Europe over the past 12 trips, and I thought that we had experienced just about everything. But an attack by a hungry peacock?

I think that's a first.

That's pretty much it for today, with the exception of today's animal picture (birds-not-attacking-Loraine division)-- 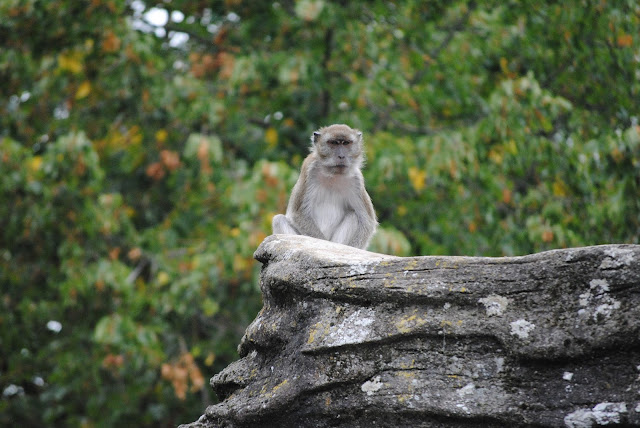 That's one of the monkeys at the zoo in the park, and outside of their cage sits a sign asking people not to feed them-- 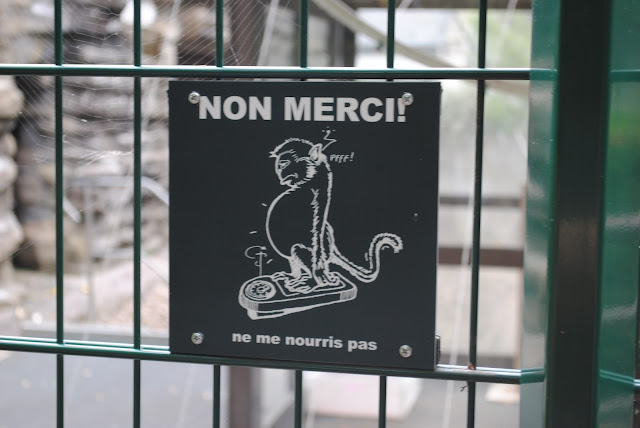 The sign cracked us up the first time, and did it again, especially the way the monkey exhales because it's too fat and the way that the scale on which it's standing is exploding. Well, we think it's funny. Your laughter may vary.

Tomorrow, we're off to the Vosges Mountains, Colmar, and a meet up with our friend Oliver. Hopefully, it will be Loraine's first day without a bird attack this week.