History Geeks of the World, Unite!

It may have taken eleven years and five trips, but we can finally say we've been to Losheimergraben.

More on that in a bit. First, greetings again from Bastogne, where we spent the day crawling around in some of the strangest places ever, thanks to our old friend Carl Wouters and our new friend Doug Mitchell, an American expat who's an expert on The West Wall, the seemingly non-stop series of bunkers and barriers known as “Dragon's Teeth” that the Germans erected on their border with France & Belgium to stop any Allied advance into the homeland. Obviously, they didn't do their job as intended, but they were so well built that even today, 70+ years later, parts of them remain.

And, as you can tell, they were huge-- Doug showed the three of us around a whole series of them, one of which was even in sturdy enough condition that we crawled around in it-- 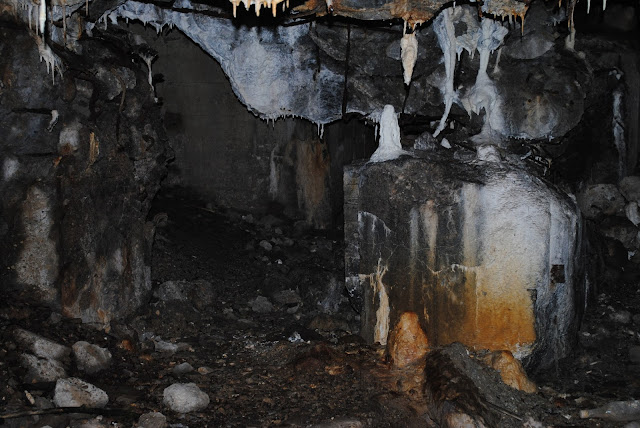 Inside what is now dirt and blown up chunks of cement once sat rooms full of people and equipment, all with over three or four meters (10 or 12 feet) of reinforced concrete over their heads. Most of these bunkers were destroyed by the Allied occupation forces in the years following the war, and others were just covered up by dirt in farm fields, but Doug has made it his mission in life to catalog and visit the site of each and every one of them, just to see what (if anything) is still there.

It was nice hanging out with fellow history geeks today. 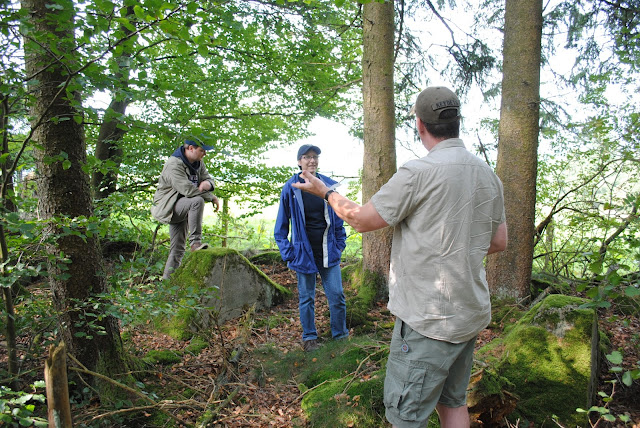 From left to right, that's Carl, then the Most Amazing Woman in the World, and then Doug, sharing his knowledge and passion for what's around us. Carl's foot, by the way, is sitting on one of those dragon's teeth, millions of which were constructed, one of the ideas being that the pointy tops of them would stop tanks from entering Germany. Unfortunately for the people who constructed them, if you cover the dragon's teeth with enough dirt they just act as a super-sized bump in the road. And if there's anything tanks are good at, it's driving over bumps in the road.

We also visited a large tower called Weisser Stein, where you could climb around 100 feet and see for miles & miles. While up there I noticed there were antennas stuck on all four sides of the structure; as it turns out, there was a group of amateur radio enthusiasts using the tower to try & pull in radio signals from far away as part of an international competition. When they found out I work in radio, they had to show us their set-up-- 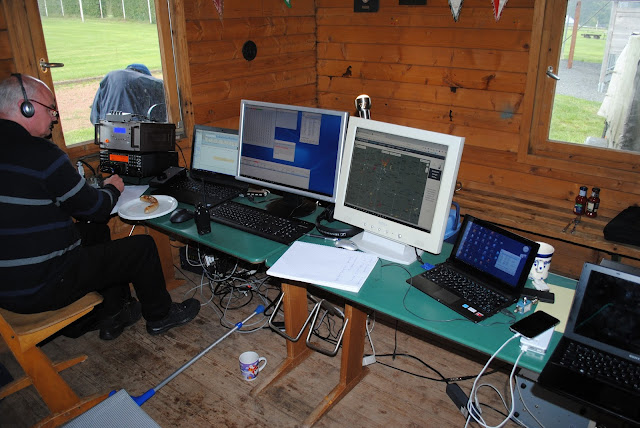 I had no idea there was an international competition to see who can pull in the most radio signals (and from the farthest away) over a 24-span, but there is. I guess you learn something every day.

Speaking of which, I also learned something from Carl when he showed us a memorial plaque he personally built a few years ago in a late-night frenzy to honor a group called “The Lost 500”. The “Lost 500” was a group of soldiers from different outfits who banded together to try & hold a hilltop after they were left behind by their retreating units during the first day of the Battle of the Bulge. For almost five days they held their position; Carl put together the plaque the day before he showed a survivor of the “Lost 500” around the hill when the veteran paid a return visit eight or nine years ago-- 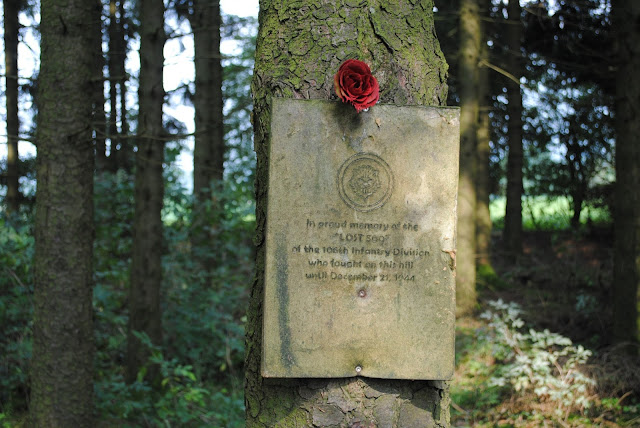 Like I said, Carl personally designed and built the memorial in one evening in his father-in-law's workshop, using the only material he could find lying around, plywood. They're actually in the process of replacing the original plaque with sturdier material, but I kinda think the original is priceless just the way it is.

But, then, I'm a history geek. Speaking of which-- 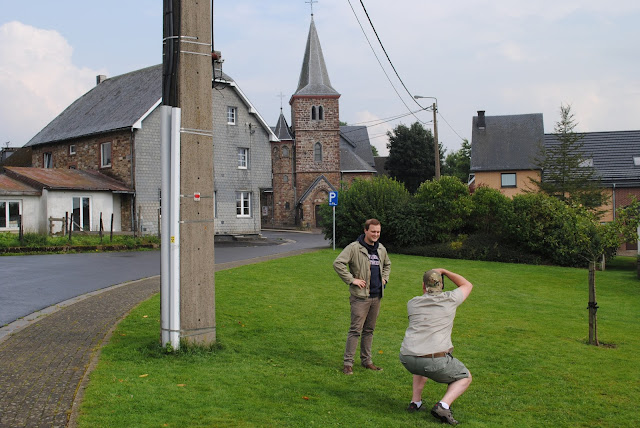 Well, today he was able to scratch another off of the list. And if you ever wonder why we come to Europe, one of the big reasons is because of people like Carl & Doug. So thanks, guys, for a fun day. We appreciate it.  And thanks Sofie for loaning us Carl for the day.  We hope he made it home in working condition!

In and amongst our travels today, which included going back & forth between the German and Belgian borders so many times we lost count, we also stumbled upon the heretofore mythical “town” of Losheimergraben. We first noticed the unusual name back in 2006, on a sign saying it was 20 or so kilometers away, and attempted to find it, just because we thought the name was so interesting. However, we didn't find it then, nor did we when we looked in 2008, or in 2011, or in 2014. It just seemed like Losheimergraben didn't exist, that it was a myth. Well, thanks to our travels today, we know it actually IS real-- 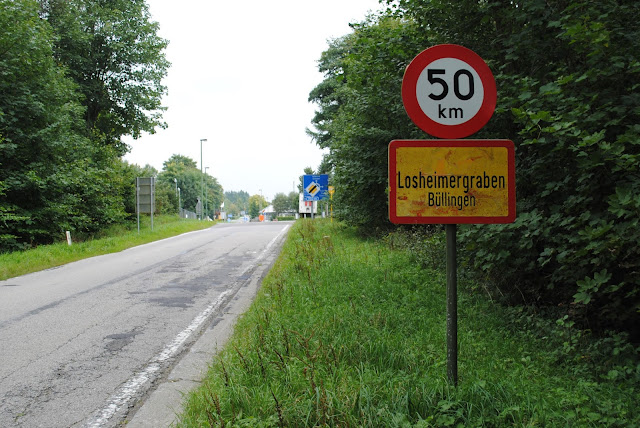 “Town” is a little too strong of a description for Losheimergraben. “Roundabout with four buildings” is a much better way to put it, and is probably a big reason why we were never able to find it on our own. But we finally have, and thanks to our friends we can now cross Losheimergraben off of our European bucket list.

Since we spent most of the day driving around to various sites and crawling around bunkers we didn't have time to do too much else, although we did have a little fun with animals, including (of course) a cow-- 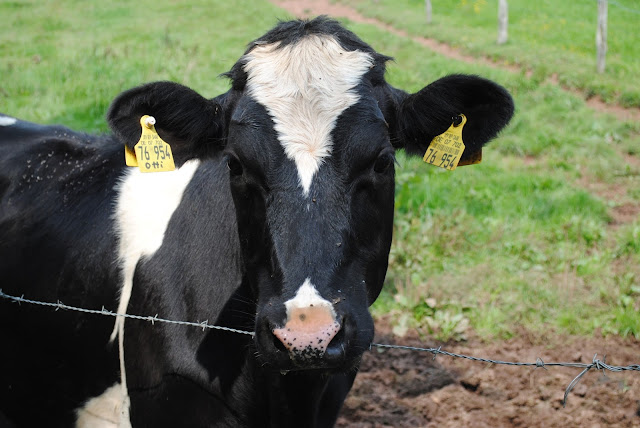 A cat here in Bastogne-- 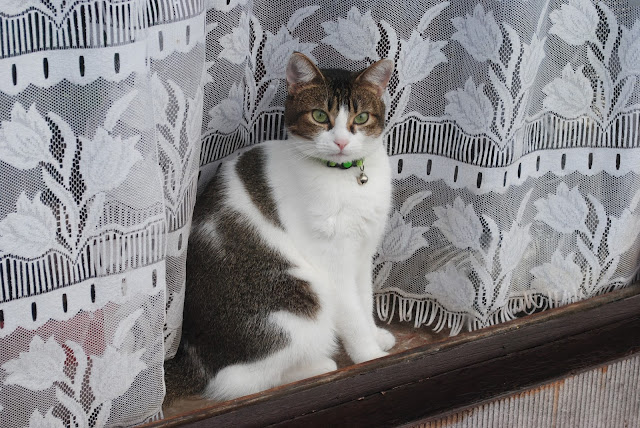 And also from Bastogne, a sign of what you're NOT supposed to let your dog do on public streets-- 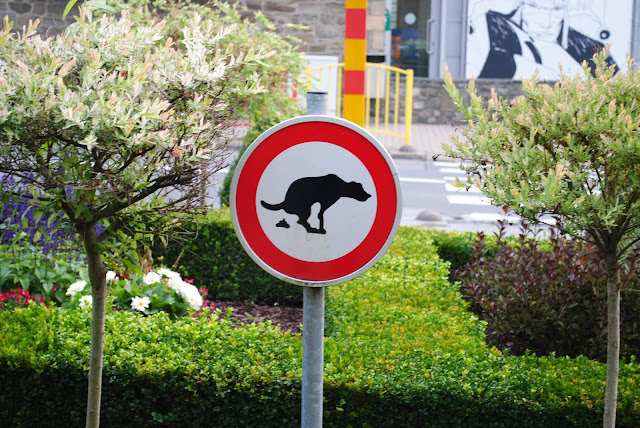 We need more signs like that where we live!

Finally, I know some of you are probably wondering if we ate a healthier lunch than the one we ate yesterday, the one consisting of samples of free chocolate at the Galler store. Well, I'm proud to say that we did not each free chocolate for lunch today. Nope; we did not.  We had this-- Because, you know, there wasn't any fruit in the free chocolate samples.

Tomorrow, we (sadly) leave Bastogne for the rest of the adventure, which continues with a night in Luxembourg, a place that will (hopefully) actually force us to eat something other than free chocolate or Black Forest Cake for lunch.

Just don't place any money on it.