And here, I thought the Dallas Cowboys were the most hated team in the sporting world. Guess that goes to show what I know.

Hello again, this time from Freiburg, Germany's sunniest city except, it appears, when we're here. When we visited for a few hours three years ago it was cloudy, and while we did see some sun today the majority of today consisted of overcast skies and one wicked afternoon downpour. No worry, though; since from our arrival just after 10 until the moment I sat down to start writing this (around 630) we were out & about exploring, eating, hiking, eating, sightseeing, and eating.

Oh. And we may have eaten a little, too.

Freiburg is a city with a lot of parks, a lot of college students, every single street under construction, and a lot of impressive sandstone buildings, so it's very much like the one in which we live on a full-time basis. However, while Marquette has its share of amazing sandstone churches, I'm thinking that even those buildings might stand back and applaud the Freiburg Munster-- 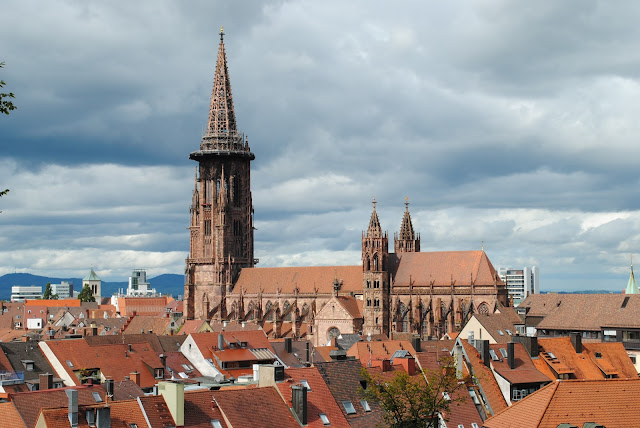 It took almost 150 years (starting in 1354) to construct the church, which is so big you can't get it all in one shot (and trust me, I tried). This picture is taken from a hill a half a mile away, and it gives you a little sense of just how awesomely big the building is. The people in the city of Ulm, Germany, claim that they have the church with the highest steeple in the world. I think the people of Freiburg may have good cause to dispute that fact. 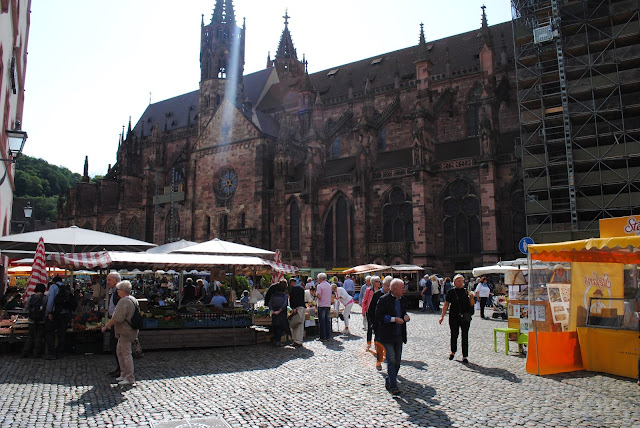 We wanted to visit the market for one particular reason. And that reason is this-- 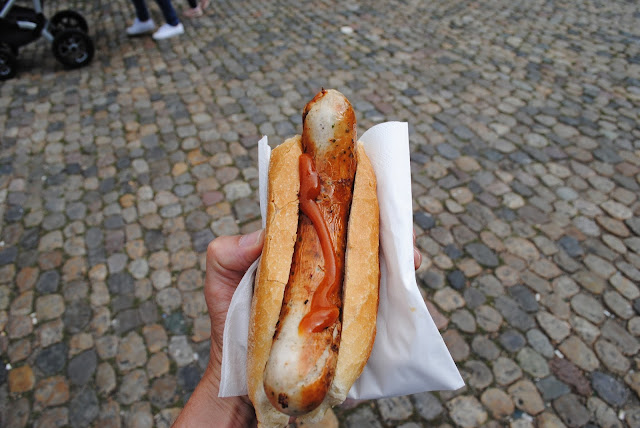 This is a seasoned bratwurst (with curry ketchup) from Licht's Wurst stand, one of about a dozen serving the market. Loraine's maiden name is Light; the German version of that word is Licht. So since she had a wurst during our last visit, we've always joked that we need to get more from her “cousins”. So today we did.

And boy, were we glad. They were amazing. And they went quite well with the black forest cake and the fresh raspberries I picked up at the market.

You can eat all that (and more) while you wander around Freiburg and check out the old buildings... 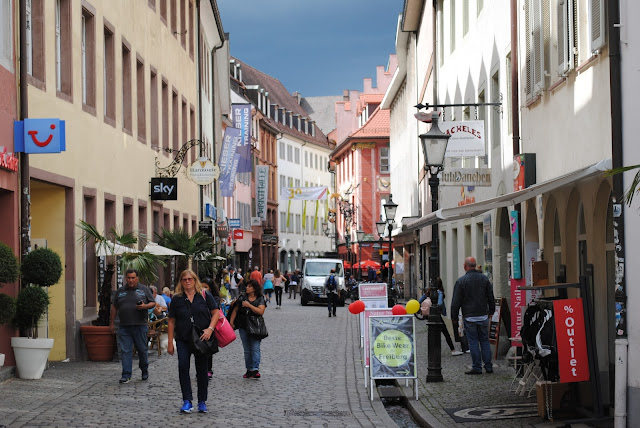 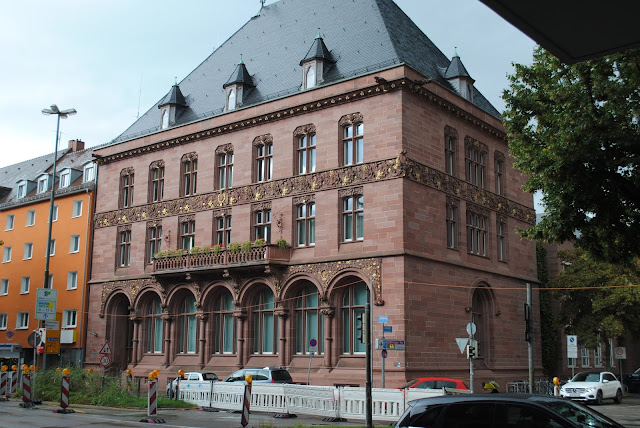 And you can also keep an eye our for a touch of local flair, the Bachle-- 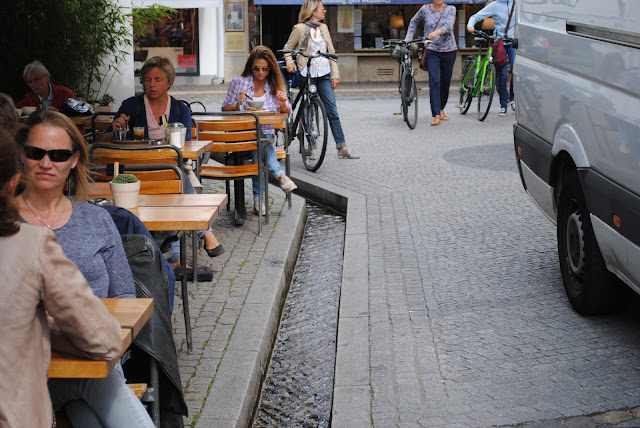 These little canals are remnants of the old city system for watering livestock and for fighting fires. There's a legend that if you accidentally step into one you marry a resident of Freiburg. So far, both Loraine and I have avoided that fate. We're hoping to do so for the rest of our stay, as well. Oh, and store owners use the Bachle for a little whimsical decorating, as well-- 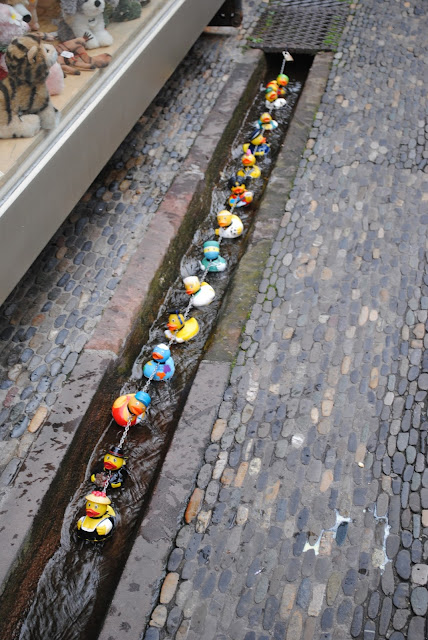 However, Freiburg may be best seen by climbing up a hill to the Schlossberg, which is a big forested area that sits in the middle of the city. You get to hike up a 20% grade for 10 or so minutes 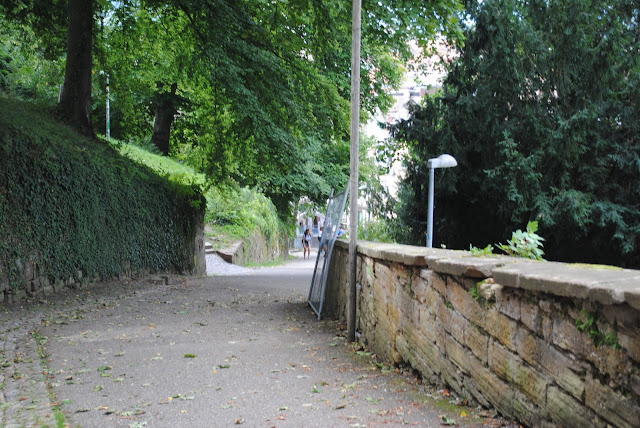 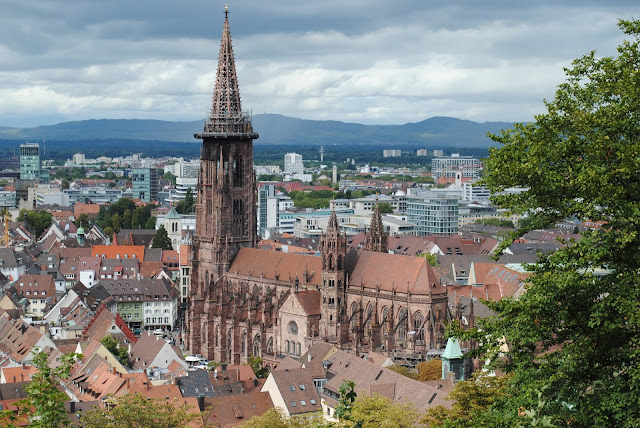 If one so desired you could also keep climbing to a tower they have and get views of the nearby Black Forest, but we figured we had enough of a workout for one day. Besides, we're heading there tomorrow. So what did we do instead?

You get a gold star if you said “ate”. But in our defense, that's when it started to rain, and we just had a massive workout, and really needed to replenish & refuel ourselves.  So we found this place called “Market Halle”, an old city market building that has been refurbished into a giant food court filled with restaurants of almost every nationality. The one thing that caught our eye was the pasta with spinach and Gorgonzola-- 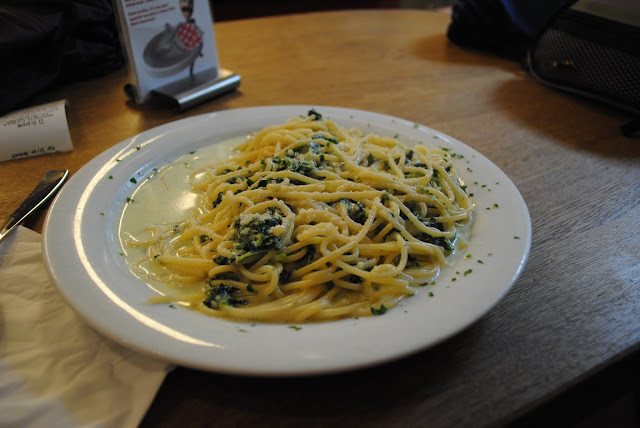 And for dessert a Kirschkuchen-- 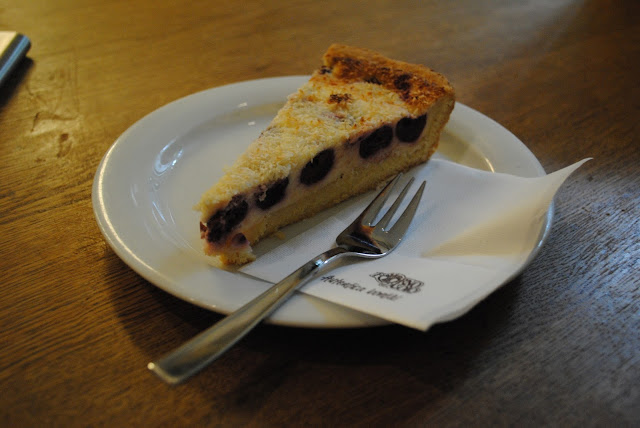 I butchered the pronunciation of Kirschkuchen; thankfully, the nice man who sold it to us corrected me (it's kersh-coo-ken, if you're keeping score at home). So while we were worried about heading into the country not knowing any of the language, so far it seems as if we're doing okay. Everyone who hears us trying to butcher a German word with an American accent replies to us in English.

So we have that going for us.

Oh, and did I mention that Freiburg has a lot of parks, including one right across the street from our hotel called the Stadtgarten (or City Garden). I think it earns its name... 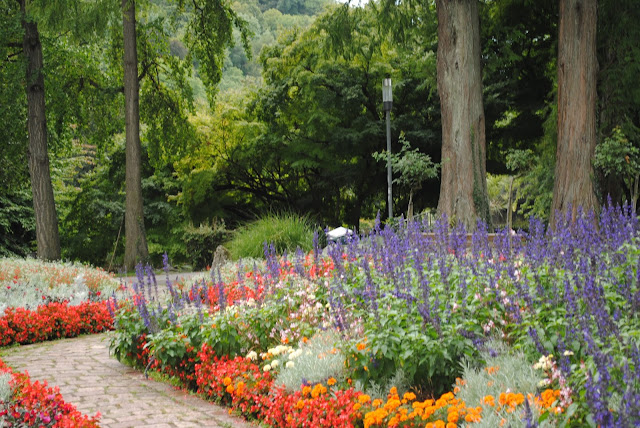 And besides, it also gives us today's animal picture! 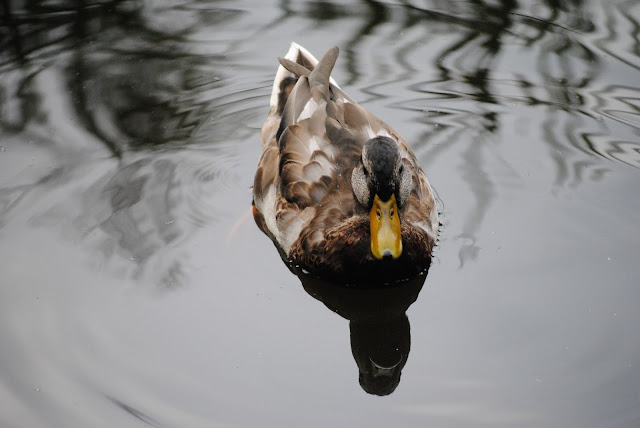 You'll be happy to know that the truce between Loraine and the animal kingdom still exists. In fact, not one of the 200 or so ducks who call the park “home” even made a move anywhere near her. I'm hoping the peace holds the rest of the trip.

Something we saw today reinforced a suspicion we've had during this trip. And this gets a little weird, so bear with me, if you would. It's about our favorite Bundesliga team (and before you ask, yes, we DO have a favorite Bundesliga team, and we aren't really even soccer fans. We're just travelers who have favorite cities). The team we follow is RB Leipzig; last year, they and the Freiburg team made into Germany's top league together. Leipzig is a bunch of young players just coming into their own who seem to be having a lot of fun while playing (in fact, they finished second in the league in their inaugural season last year), and that's why we've started watching their games despite knowing next to nothing about the game. (If you're curious, we started watching one of their games last year just to see if they had any shots of the city, which we visited in 2013, and kind of got hooked). Anyway, the team has a bit of controversy behind it. You see, the “RB” in “RB Leipzig” stands for Red Bull, which means the team has corporate owners, which is apparently a first in the league. And because of it, there are some people here who feel that corporate ownership, especially by a multi-national company based in the US, is evil (unlike, say, Bayern Munich, which goes out and buys the best team they can year after year after year and wins the league year after year after year). And it's not just Germany; we even saw a sticker on a light post in Luxembourg Sunday that ragged on the team, just because they have American corporate owners.

I bring this up because we went into this store today-- 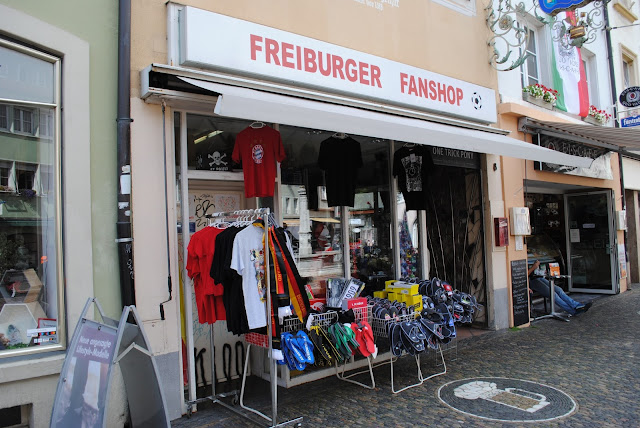 To see if we could find any RB Leipzig merchandise. We went in, and saw stuff for Freiburg, and Hertha Berlin, for Shalke, and even for the evil Bayern Munich. In fact, we saw stuff for every Bundesliga team except one. And you know which team that was?

Uh huh. You think the Packers & the Lions have a bad rivalry? That's nothing compared to RB Leipzig and the rest of the Bundesliga!

Okay; I've babbled way too much today, so I'll just wrap up with a couple of pictures, one of which is a bad pun from a local burger joint-- 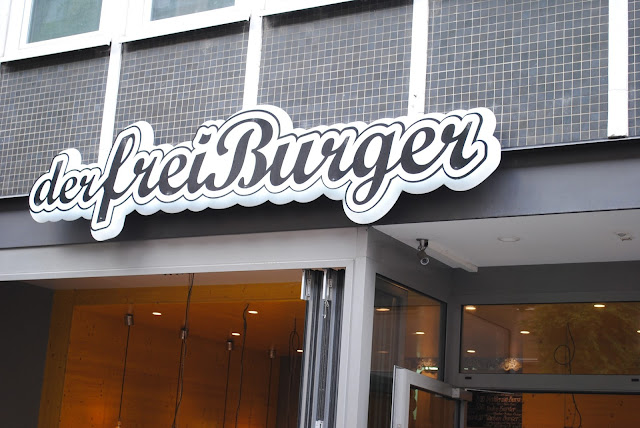 The other of which is for Loraine's Aunt Suzanne, who asked us to take any pictures with her name in it. Well, Suzanne, the spelling is just a little off, but here you go! 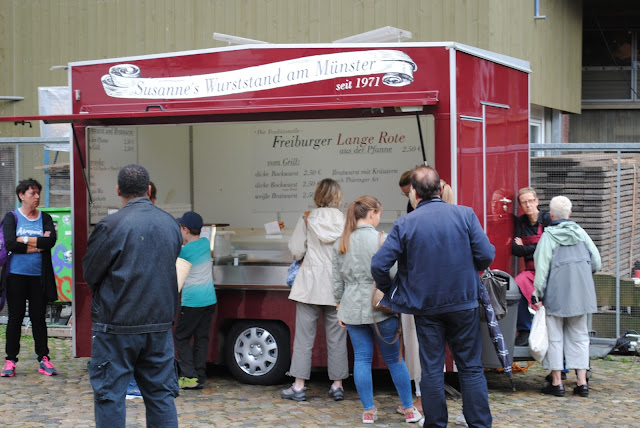 Like I mentioned early, we're off to the Black Forest tomorrow, including a visit to a place that (supposedly) invented the Black Forest cake. We've had several pieces so far this trip; we'll have to see how theirs stacks up. So until then...