Sunday in the Park With Jean-Paul

You hafta give it to our friends in France. They do their best to make sure you get everything single thing right.

Greetings again from Bayeux, where we've returned after spending most of the day with our friend Jean-Paul Pitou in and around the area of Montormel, where the final battles of the Battle of Normandy took place. We did this for three reasons—one, to see Jean-Paul again. It seems like almost every time we come to Normandy, we spend our Sunday with him, whether it's wandering around an old cemetery or looking at where a tank battle took place. Two, we did what we did today to find out more about this not very well-publicized part of the war. And three, we did it because one of Loraine's research subjects, John Zbacnik of Traunik, joined his company here as a replacement for wounded soldiers at the tail end of the battle and then stayed with them through his death in Germany a couple of months before the end of the war.

We spent most of our time at the Monument de Montormel, which is an amazing museum sitting high atop a hill which overlooks this plain-- 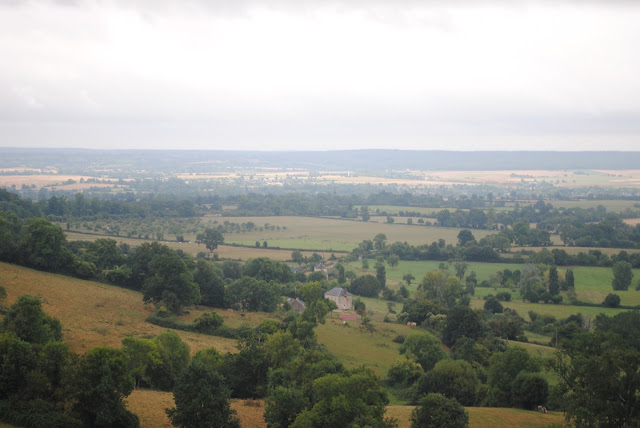 This is where American, British, Canadian, and (most importantly) Polish soldiers fought German soldiers trying to retreat through what's now called the “Falaise Gap” (even though the city of Falaise isn't even near the site). I won't go into the details too much; you can always Google it if you'd like to know more. But the battle was a bloody end to the German presence in Normandy as they retreated through what's now called Coulair de la Mort—The Corridor of the Dead. From the stories were were told, the loss of human life was staggering—in fact, there are over 7,000 soldiers from all sides still lying in the ground of the area, unaccounted for. Once the “Gap” was closed, the Allies marched toward Paris and, within the year, Berlin.

I said it yesterday, and I'll say it again today. War is a waste.

Anyway, remember how I said that people in France will do their best to make sure you get every single thing you need, right? Well, once the director of the museum found out that Loraine was interested in one particular person, he got down to business, and while we were watching a video presentation he drew this-- 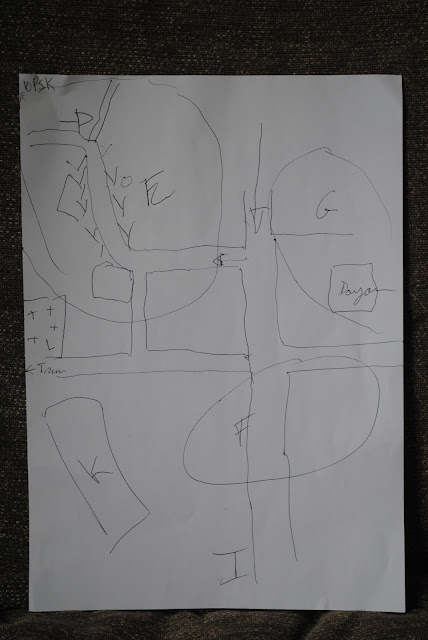 It's a map of the area where Zbacnik would've been stationed once he joined his company. He also provided Jean-Paul with additional info on where his company would've moved during the final battle, so that he could bring us to those exact spots where Zbacnik may have once stood, like this field-- 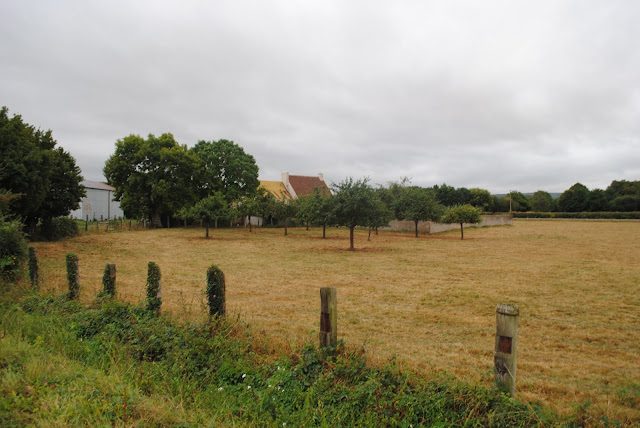 It doesn't look like much, but it's a place where Zbacnik would've been stationed. Showing us things like that is very important to the French citizens who study the war. They've learned as much as humanly possible, and they want to share that knowledge with other people who care. And they take pride in being as exact as possible. If they're not, or if they've found they've made a mistake, they take it personally. It doesn't really matter to us; we're just happy to be in the general vicinity. But because the people of this area feel like they owe Americans for liberating their land, they'll do anything they can. Doesn't matter if the Americans they're helping weren't born until two decades after the war; because we're American, they want to make sure we get everything we need, and they want to make sure that it's in perfect form when we get it.

And that's why we now have that hand-drawn map to add to Loraine's collection.

That took up most of our day today. And as you can possibly tell by the pictures, the weather was more Normandy-like than it has been since the beginning of our trip, so the fact that we spent the day driving or in museums was fine. While it was raining on and off, at least it was warm. And for those of you keeping score, today may have been the one “bad” weather day on our trip. After a cloudy (but quite warm) day tomorrow, it's supposed to get back to being sunny and around 80 as the week wears on.

I think we can work with that.

Here are a few other odds & ends then, beginning with the fact that Loraine and I are geeks. Well, okay, I'm definitely a geek, and I must have rubbed off a little on the Most Amazing Woman I Know, because every time we drive near or see a sign for the city of Caen (the big city in this region), one or the both of us will yell out “KHAAAAAAAAAAAN”, a la William Shatner in “Star Trek II: The Wrath of Khan”.

You see, “Caen” is pronounced like “Khan” of the movies. That's why we can't help ourselves.

For the first time today we didn't buy any chocolate. I know; shocking, isn't it? But between the fact that we were busy and the fact that most French stores are closed on Sunday, we just didn't get around to it, And for those of you who may wonder why we buy so much when we're over here, all I have to say is this--can you get a dark chocolate bar with sesame seeds anywhere else? 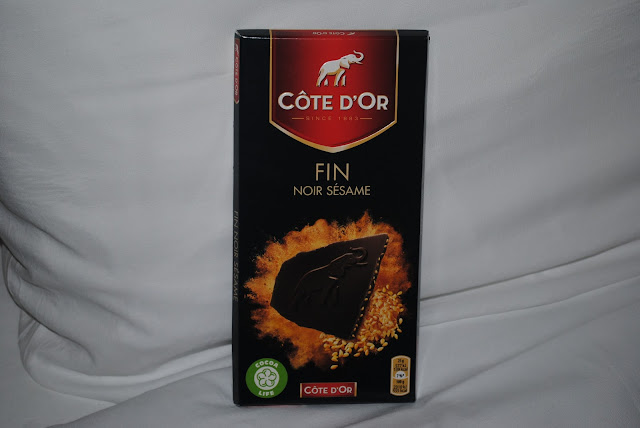 Or a white chocolate with vanilla & bourbon bar anywhere else? 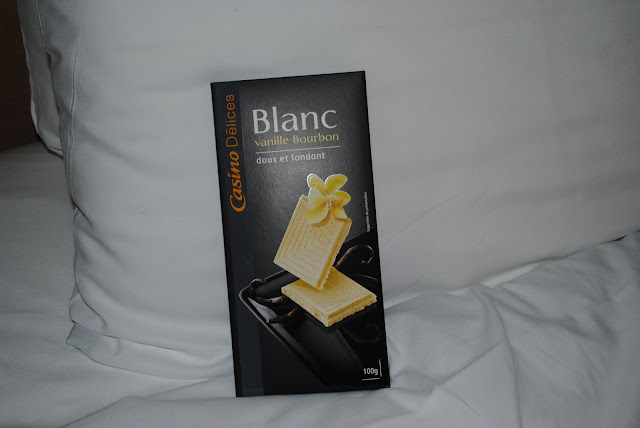 I thought not. And, your honor, the defense rests.

Tomorrow we leave Bayeux for two days (don't worry, we'll be back) to be spent in Ste Mere Eglise, where several...interesting things may be awaiting us. First on tap tomorrow we'll once again meet up with Jean-Paul and with the mayor of a small French town called St. Georges-de-Bohon, where seven years ago (on another Sunday with Jean-Paul, in fact) we somehow became the object of a town-wide gathering and party. When we asked Jean-Paul if they were planning another big celebration for tomorrow, his eyes lit up and he simply said...

Oh boy. And that's just our morning.  We also have a 4 pm appointment that could lead to a few things we don't expect.  So I think tomorrow's blog will be quite the fascinating one...