It hit me as we were walking back to the hotel.

There comes a moment in the final days of every trip when you start thinking about all the adventures you've had, and you realize that they'll soon be coming to an end. That moment happened for me a few hours ago as we were nearing our hotel after one last walk in and around Bayeux. It was a perfect late summer day—the sun was out and the temperatures were above 80—and Loraine and I had just strolled around the city, taking pictures of kids at a skateboard park and buying a few last items of chocolate. Heck, we had even discovered a park we never knew existed. It was one of those perfect moments for which you can never plan but you're always grateful to have experienced.

And it was probably the final one we'll have on this little journey.

However, I consider myself to be lucky as far as that goes. This has been an almost flawless and amazing trip, from the moment our luggage actually arrived on the same plane as we did to the moment the sun perfectly hit Loraine's smiling face as we walked into the hotel. I wouldn't trade it for anything in the world. And while it's soon coming to an end, we'll always these perfect little memories.

So what exactly did we do today, aside from becoming way too reflective? Well, we hit the road to see two things. The first was the town of Villedieu-les-Poeles, a town that actually reminded us a little of Marquette. It has a history of mining—in VlP's case, copper--and it now seems to have an influx of artists to go along with its tourism related activities. In fact, signs of the town's history with copper are everywhere-- 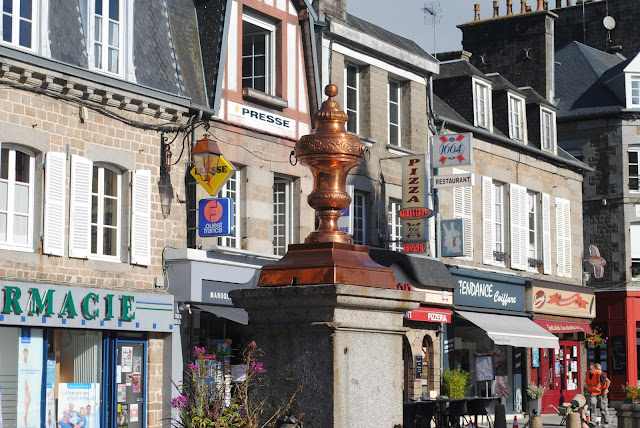 Perhaps not surprisingly, they have several shops that sell nothing but cookware made out of the town's copper. Like Marquette, it's also built on a series of hills, which means that almost everywhere you walked, you would run into views that caught your eye-- 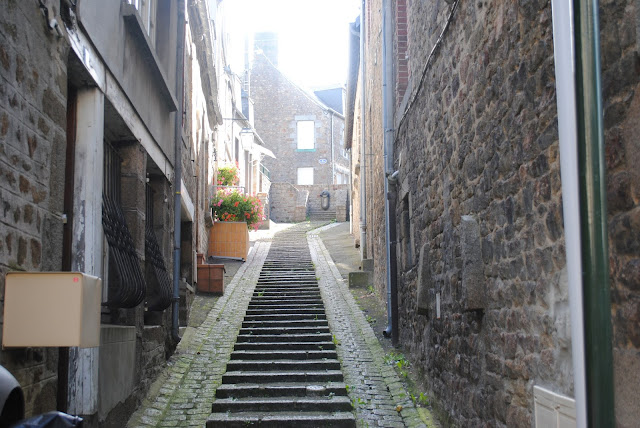 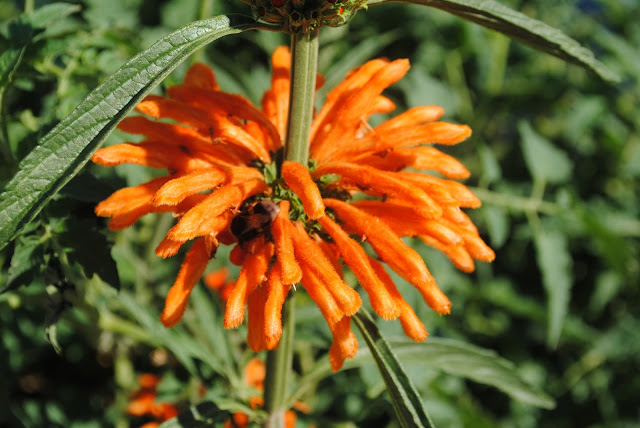 Unlike Marquette, though, their farmer's market has some rather unconventional looking seafood for sale-- 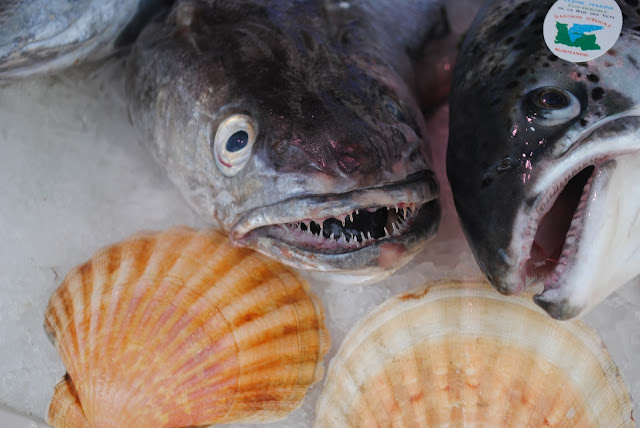 I'm curious. Just what exactly did that fish do with those teeth?

Oh, and you remember how I apologized yesterday for lying because I said you wouldn't have to look at Tour de France stuff any more because we were out of the area in which the race went, and then I went and posted more stuff before promising not to do it again? Well, here's yet another apology for yet another lie, because guess what went through Villedieu-les-Poeles? 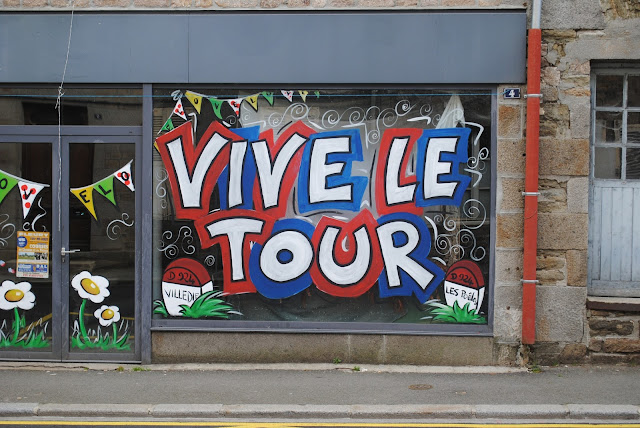 Okay, I can now say with certainty that you won't have to see ANY more stuff related to the Tour de France. Unless, of course, I'm wrong. Because, as we all know, THAT could never happen.

After Villedieu, we took a drive along the Vire River. There are actually whole driving and walking circuits you can take along the Vire River Valley, and some of the descriptions sounded nice. But instead of taking one of the suggested circuits, we made up our own, which led us to a park in the little town of St. Suzanne sur Vire-- 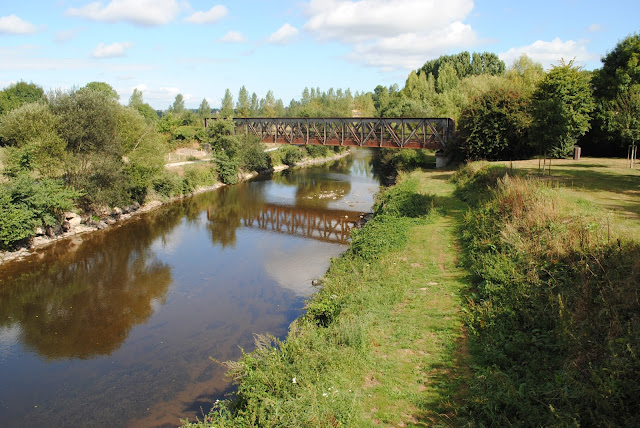 We ate lunch on the banks of the actual Vire River, instead of just driving around it. The bridge you see in the picture is an old railroad line that's been converted into a bike and walking path between towns. Before leaving, we did two more things. This picture is for Loraine's Aunt Suzanne-- 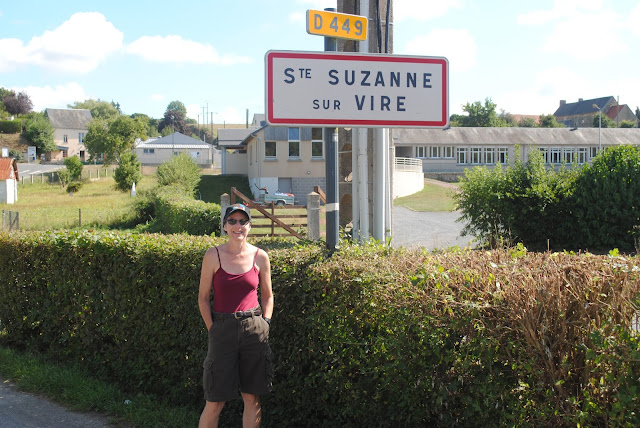 Who may be happy to know we now call the town Aunt Suzanne sur Vire. I don't think we'll be able to get the French government to officially change the name, but we haven't given up hope yet.

Secondly, as we were walking back to the car, we saw a sign that said (in French) “beware of dog”. Once we saw the dog, though, we had to laugh-- 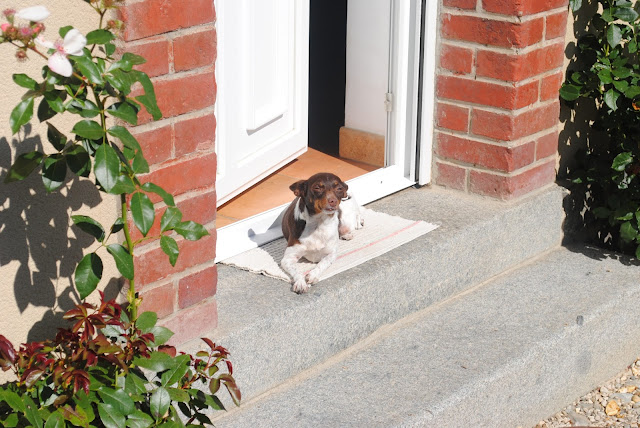 Maybe the sign should've said “Beware of hamster”, or something just a little more appropriate.

After we left Aunt Suzanne, we stopped at a place called “Roches de Ham”, which is a rock where you can stand and see a view of much of the Vire Valley. We just thought it would be one of those tacky tourist-trap places, but lo & behold, the view wasn't too bad-- 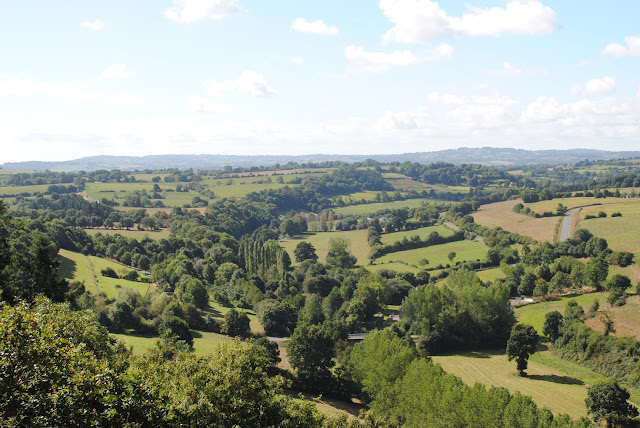 On the way back from the Roches we saw this and we (okay, I) had to stop to take a picture-- 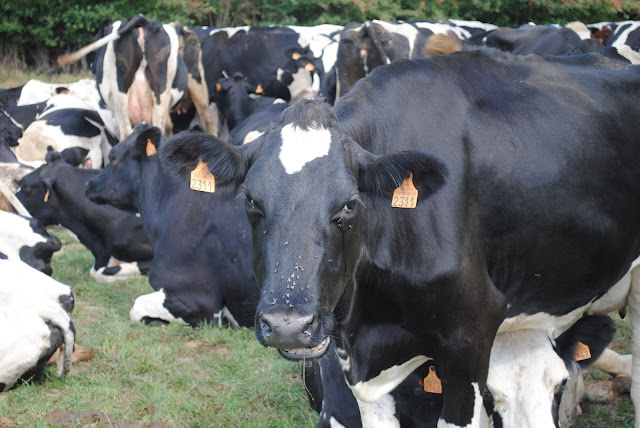 There must've been three dozen cows in a field eating, and after my stepping out of the car and squealing like a 2-year old in delight one of the cows looked up like I was insane. And who knows. It may have been right.

Then it was back to Bayeux and that walk I was talking about. Here are the kids at the skate park. Take a close look, and you'll see one of them, on a Razor scooter of all things, had some serious air-- 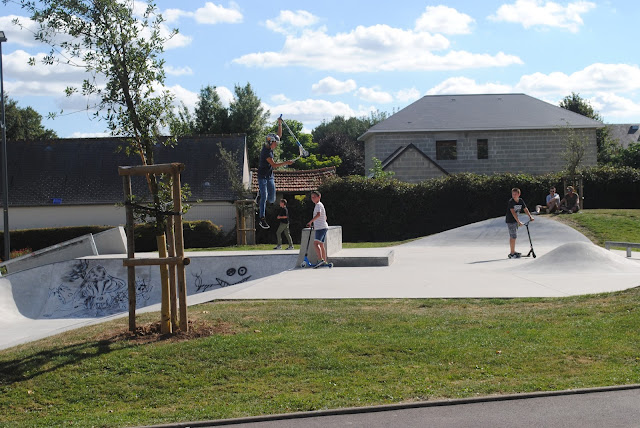 And the park we didn't know existed, a park that is part of the city's river walk. We had strolled down the walk before, but apparently never went down this far-- 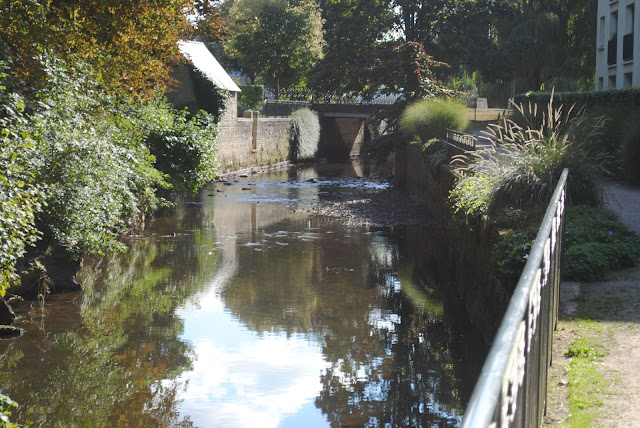 See? There are parts of Bayeux we didn't even know existed, and today marks the 30th day we've spent here over the years. I guess that means we'll just have to start soon on the second 30 days!

Tomorrow, we have a few final hours in Bayeux before we leave, so we'll head down to the market, buy some berries, and see if that shivering little piglet the farmer was trying to sell last week is still available. Afterwards we'll head to Paris (trying to figure out some of the songs we've been hearing all week so I can share them on the air), return the rental car, play for a little bit in the Roissy town park, and then see if we need to throw everything in our suitcase away in order to to make room for our chocolate.

So until tomorrow from Roissy...