Around The World in Five Minutes

Tonight I had a date at an Italian restaurant with a German girl while the French staff sang along to an Abba song.

Sometimes, the world is an amazing place.

Greetings from our home away from home, Bayeux, where we returned after our little two-day jaunt over to St. Mere Eglise. We had never spent more than a couple of hours over in that specific part of Normandy, and while we missed staying here, we're very glad that we spent the time that we did hanging out with friends old and new, exploring places we knew before and places we know now, and generally just having a whale of a good time.

So Ste. Mere Eglise and the western half of the Cotentin Peninsula, we thank you kindly. And one day, we hope to return.

Before we left Ste. Mere Eglise today we met up again with our friends Henri-Jean and Yvette Renaud. You may recall that we had dinner with them Monday night, and Mr. Renaud offered to take us on a tour of Ste. Mere Eglise's Airborne Museum this morning. This was an offer we couldn't refuse; after all, Mr. Renaud lived through what the museum depicts, and spent several decades heading the organization that runs the museum. To put it in local terms, it would be like going through the Marquette Regional History Center with someone like Peter White or John Longyear. It was a fascinating experience, and it was actually kind of fun seeing Henri-Jean point out pictures of himself as a child or a young adult. He's obviously very proud of what he and his group accomplished, as he should be.

And since we didn't take a picture of our gracious hosts Monday night, here's one of the Renauds and the most amazing woman I know outside on the museum grounds. 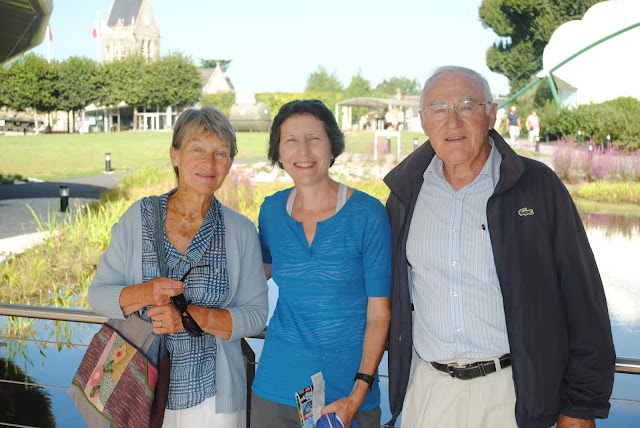 Loraine actually got to pose for several pictures today, because after we left the Renauds we met up with and had a nice visit with our friend (and avid trip blog reader) Thierry Ferey, who lives in nearby Auvers-- 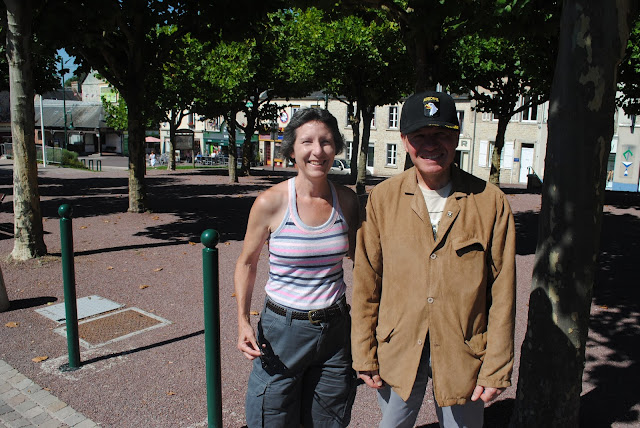 Thierry, like many people around here, has a strong interest in several little known aspects of the invasion—his mother was a young girl in a home which switched hands four times (German, American, German , and finally American) in the first 48 hours of the invasion. And then he also researches the aid station that was set up in the church in the town where his father grew up. Like I said, many people around here research battles or other events that affected members of their family or their home town, and Thierry is one of the best.

And, despite what he thinks, his English is amazing!

On our way back to Bayeux we stopped in several places, one of which was a country lane down which a paratrooper from Marquette spent his last day-- 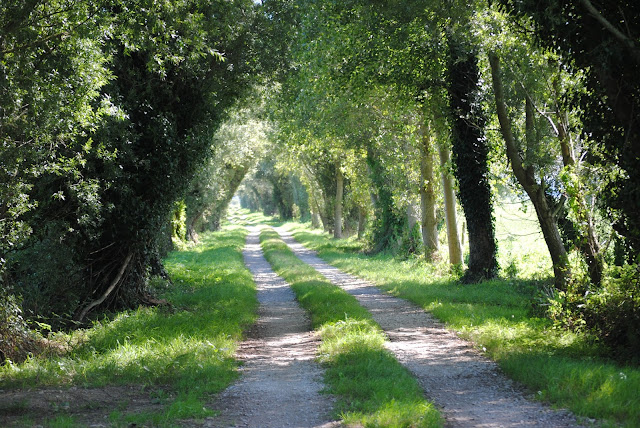 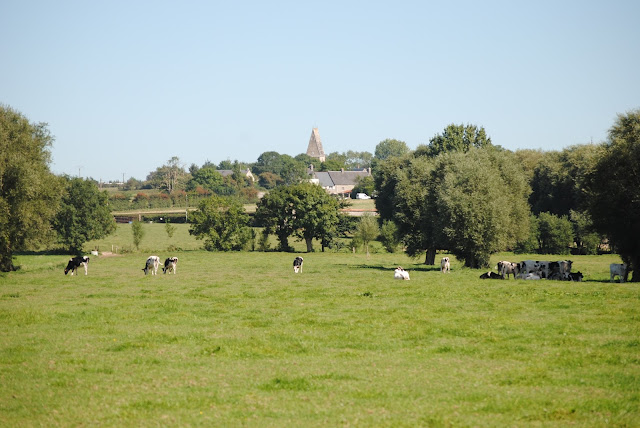 We arrived back in Bayeux-- 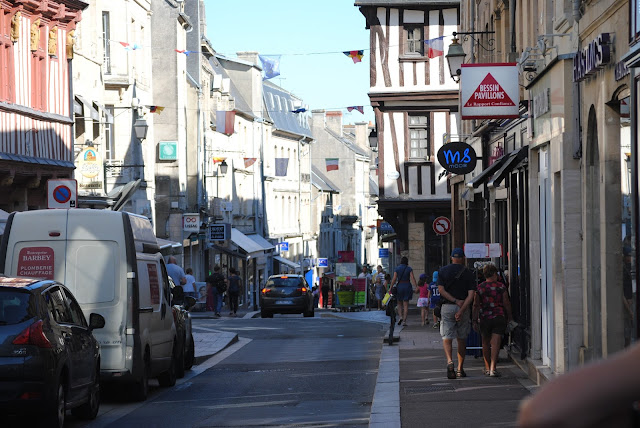 And before carrying on a long-standing tradition, we paid a visit to the city's Public Garden-- 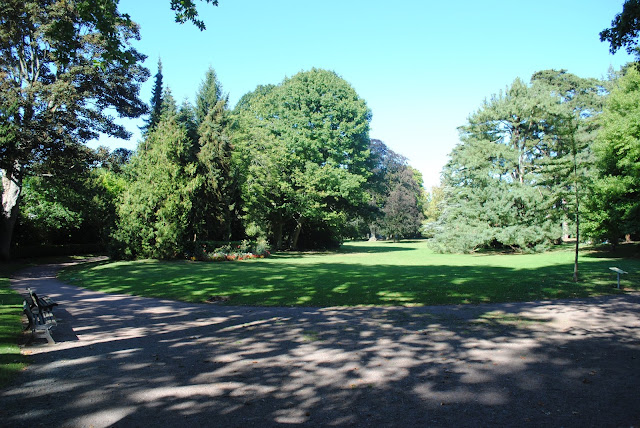 It's a beautiful place with flowers and trees and grass, and seeing as how it was sunny and 86 here today, it was also filled with people walking and families playing-- 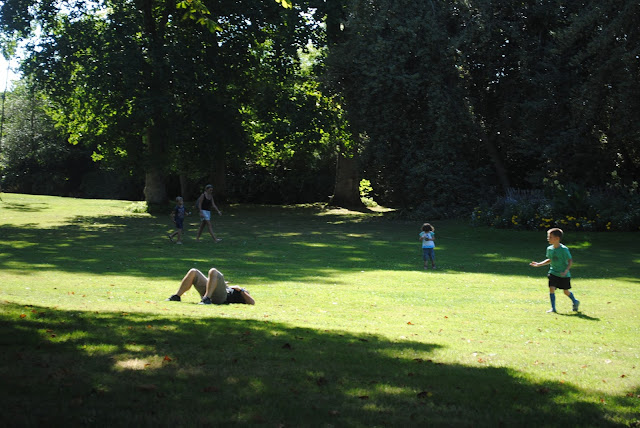 And, of course, it was also filled with beauty shots of flowers everywhere you look-- 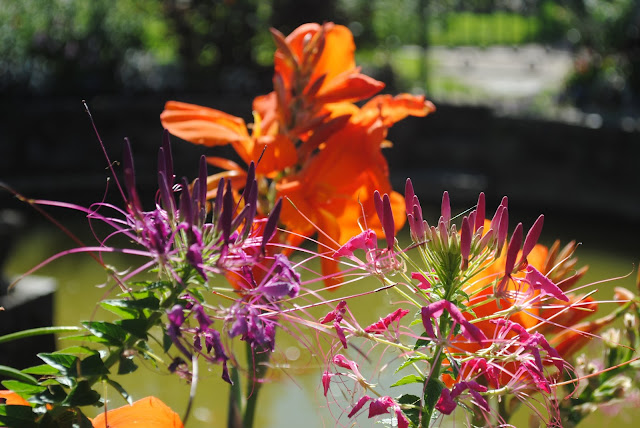 That then led to the multi-culti experience I described in the first line of today's blog. The first time we came to Europe Loraine ( a woman of German descent) asked me out on a date in a small German town where the only restaurant that happened to be open was an Italian one. Ever since then, at least once a trip, we repeat that experience. When we were here a few days ago we noticed an interesting looking place on the Rue de Cuisiners (which roughly translates to “Restaurant Street”, as establishments selling food have been there for several centuries). So tonight we ate at Le Marsala-- 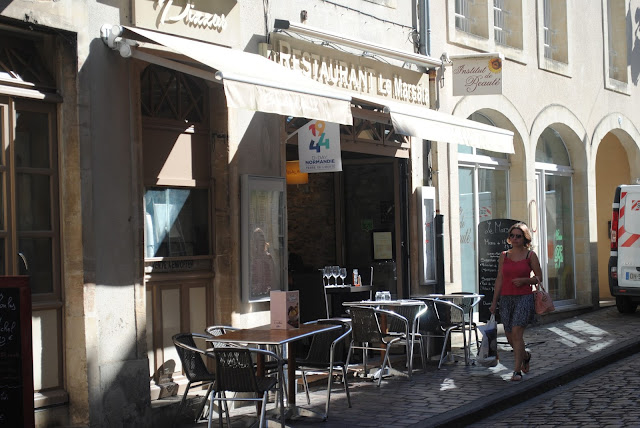 The menu was so jam-packed with interesting items that we're talking about going back again before we leave. Tonight, through, we decided on pizza-- 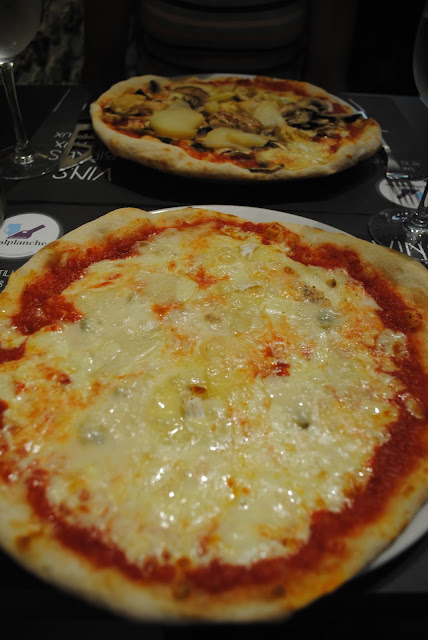 Mine's in the foreground; it's a 4 Fromages (4 cheese) pizza where the fromages were mozzarella, goat, bleu, and Camembaert (a cheese actually made here in Normandy). Loraine's (in the background) had two different cheeses, chicken, mushrooms, and potatoes. They were both amazing, as was the service, so if you're ever in Bayeux (and you know that some day you will be, right?) we highly recommend Le Marsala!

Finally (and you won't have to put up with this much longer, seeing as how we've left the area where the race occurred) here's today's Tour de France objet d'art-- 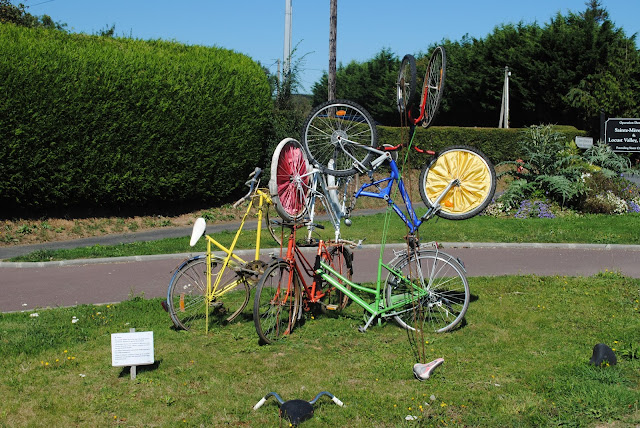 Well, I only had that one picture of cows. I had to share SOMETHING dorky, right?

Tomorrow, we drive south for an hour and a half to visit our second favorite place in France. And if I can get a picture, maybe I'll also talk about the greatest bromance in the history of French morning television. We'll see.