Back on the Rue St. Patrice

Hello, Bayeux, did you miss us?

Greetings from our French home away from home, the city of Bayeux, where for the first time in four long and overdue years we're happily ensconced at the local Novotel hotel for the next three days, before leaving for two nights and then returning for three more nights. Details on exactly WHY will be forthcoming, but let's just say it has to do with someone you've met in these pages before and leave it at that, at least for now. 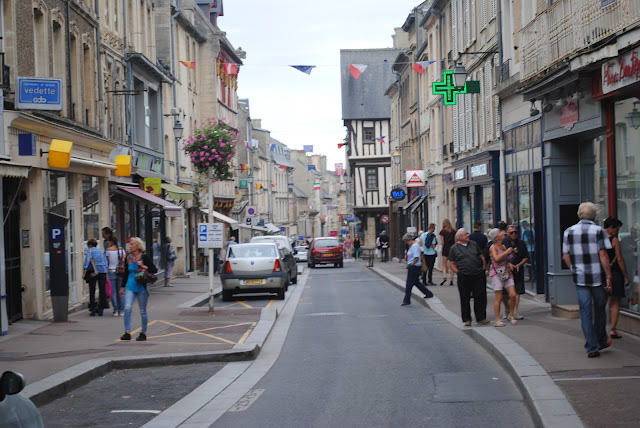 Which, where the picture was taken, is called Rue St. Martin. In case you couldn't tell, it's a narrow street jam packed with shops and restaurants and a cacophony of noise. The other end of the street, a quiet corner where I'm sitting typing this, is called Rue St. Patrice. And the same street, in between the shopping and the hotel, is called Rue St. Malo, and that's where Bayeux's weekly farmer's market, another reason why we like it here, is set for tomorrow morning.

I'll provide pictorial proof as to why that's so cool and awesome and amazing in tomorrow's edition.

We left Chartres bright and early this morning, and made the trip to Normandy in three hours. We had to make two stops on the way, one at a Hyper U (a mega-grocery store) to (cough cough) buy chocolate, and the other to stop at the Normandy American Cemetery to say “hey” to four men from Marquette County who died during the first month of the invasion of this area—Major William Richards of Negaunee, who died on Omaha Beach D-Day, and Roy Chipman and Roy Smith of Marquette, and Harry Smith of Negaunee, all of whom were killed during the sweep inland. We just wanted to pay our respects and bring them greetings from home, just like we wanted to visit the grave of Theodore Mister of Maryland, a guy about whom we knew nothing until our last visit here.

I'll share Mr. Mister's story in a few days once we find something out.

In the past, I think I've referred to the Normandy American Cemetery as the Disney World of American military cemeteries, and to be blunt, it's actually gotten a little worse over the past few years. Unlike every other American military cemetery, you are now no longer allowed to go half the places you used to in the cemetery, you have (literally) no place to throw your garbage, and you have to go through metal detectors just to enter the visitor's center. And yet despite the fact that there are signs everywhere telling you can't sit, lay down, or make noise at the graves, and that you must be respectful of where you are AT ALL TIMES (the capital letters are theirs, not mine), that apparently doesn't apply to the staff. 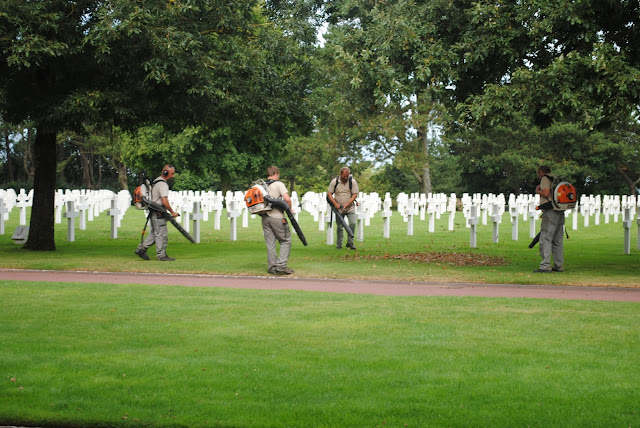 And then use that pile as fuel for the worst smelling fire in French history. You can't capture the smell with a camera, but the haze you see by the trees in this picture isn't fog, it's the smoke from their fire. 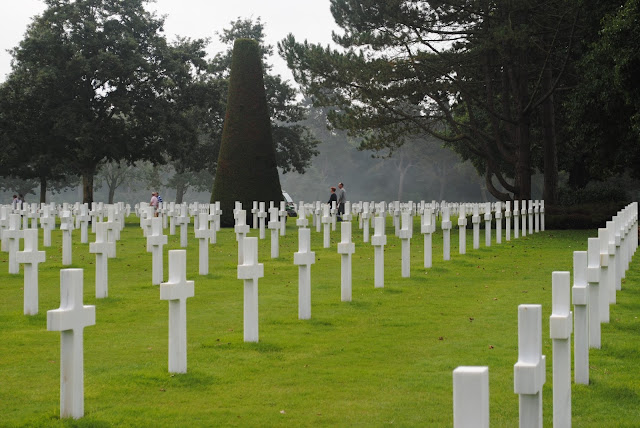 No other American military cemetery we've been to (and we've been to a lot of them) is as regimented as Normandy, nor does it flaunt its own rules like Normandy. That's why I call it the Disney World of American military cemeteries. You're much better going to St. James a 100 or so kilometers from here, or Epinal or Margraten or Henri Chapelle or any other cemetery than you are going to Normandy.

And that's my rant for today. I'll shut up about it now and forever.

What's new in Bayeux? Well, sad to say, there are more names on the Memorial des Reporters-- 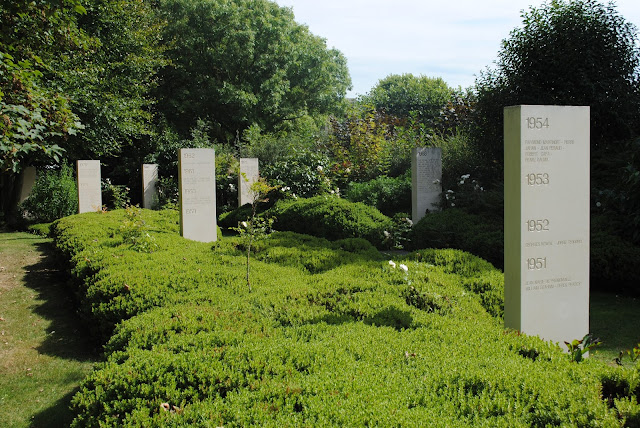 This is a memorial here in Bayeux that honors journalists from around the world who were killed covering wars. And sadly, the names they added for 2015 contain the reporters and artists who died during the massacre at Charlie Hedbo in Paris last January-- 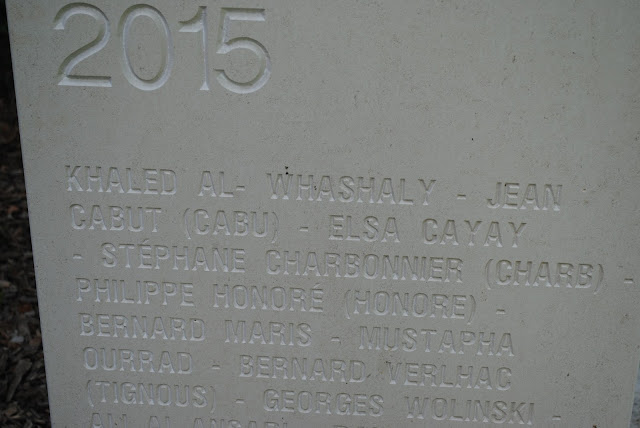 Theirs are the first dozen or so names under 2015. The names in parentheses are the pen names of the artists who drew the cartoons. Bayeux, by the way, is home to the monument because the city hosts an international conference and expo on war reporting every year during the first week in October. I'm not quite sure why they do, but they do, and good for them.

When we were here in 2009, a date night we had planned at an Indian restaurant had to be postponed when the building next to it had its two top floors blown off by a gas explosion. When we returned in 2010 and 2012 the building still hadn't been repaired, but by 2016? 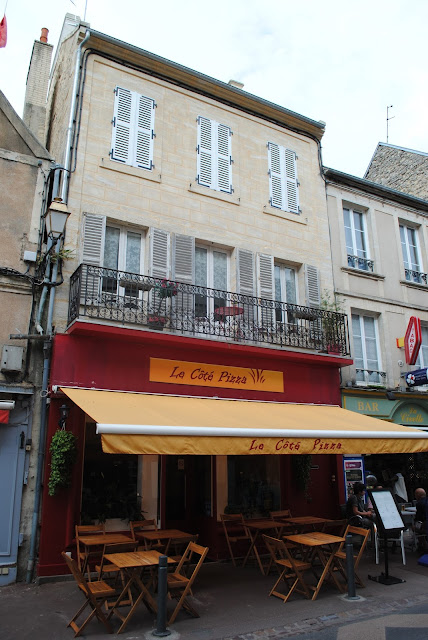 Look. The building is whole again! And it only took four to seven years to finish, enough time for the Indian restaurant to go out of business (which is a shame, because the cashew curry I had there was amazing). I think when I wrote about the building in 2012 (three years after the explosion) I joked that it should finally get fixed by 2021 or so. I guess this was one of the many times in life where I was wrong.

So to the owners of the building and the people who worked to fix it, I apologize. I was only off by five or so years.

Oh, remember how I didn't know what those purple flowers were yesterday in Chartres? Well, today I don't know what orange flowers are in Bayeux-- 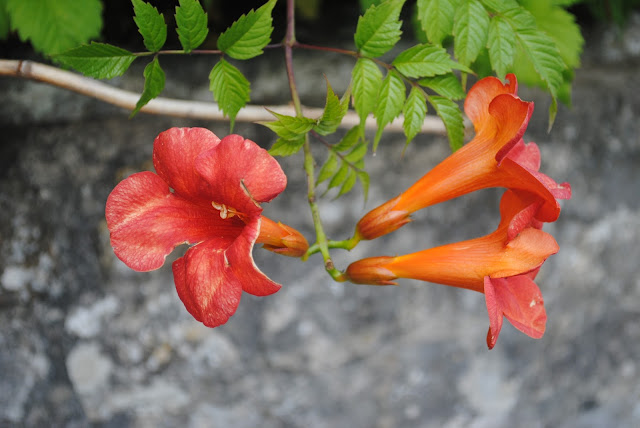 So if anyone has any idea, please let me know. And thank you in advance.

Tomorrow, we go to Bayeux's market, and then drive around a little and walk a little, maybe even climbing a mountain in the process (by foot, not car). It's supposed to be sunny & warm again, so why not, right?