I can't believe I had to wear pants today.

Actually, it's a good thing we're here, at least tonight, because the 50 kilometer drive back to Bayeux might be too much to handle right now. We basically did two things today, both of which were the reason I had to wear pants all day.. And since I was wearing pants while on vacation, you know those two things had to be important, right?

The first was a stop at St. Georges-de-Bohon, where we had been asked to visit by the mayor of the town. Even though the visit was set up by our friend Jean-Paul, it was still kind of a big thing. We first visited St. Georges seven years ago when Loraine was doing research on Marquette's Ludvic Steinberger, who was killed in the town during July of 1944. When we visited last time, we had been the first Americans to knowingly set foot in the town since the end of the war, and the townspeople wanted to thank the Americans—any Americans—for liberating their town back 70-some years ago.

Once he found out we were returning, Mayor Alain Langlois wanted to meet with us again, where the members of the town color guard once again held a little ceremony, including a moment of silence, outside of the town hall-- 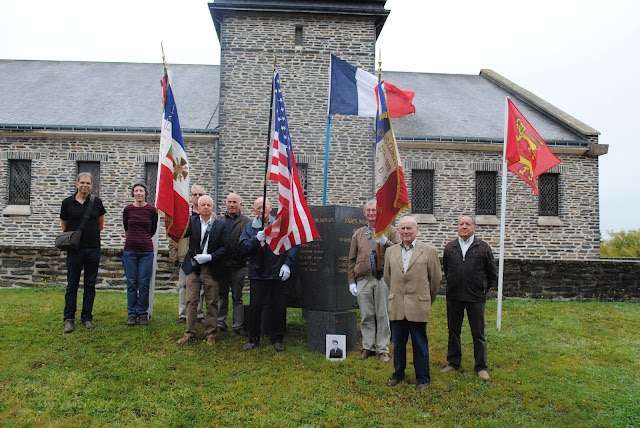 Then inside, we, Jean-Paul, the Mayor, and the members of the color guard had a little fete 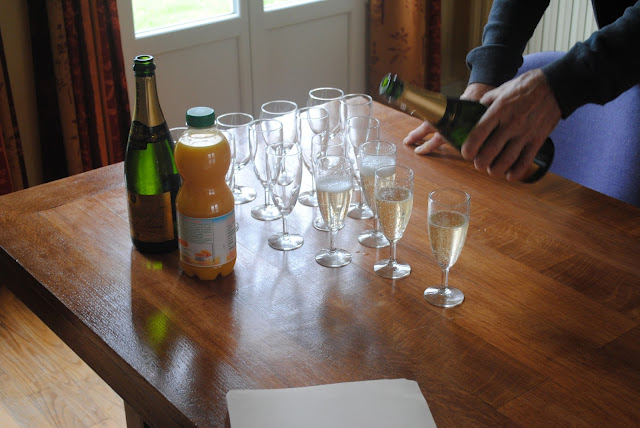 Loraine presented her latest book, “Elden's True Army Tales”, to the mayor, who was quite pleased-- 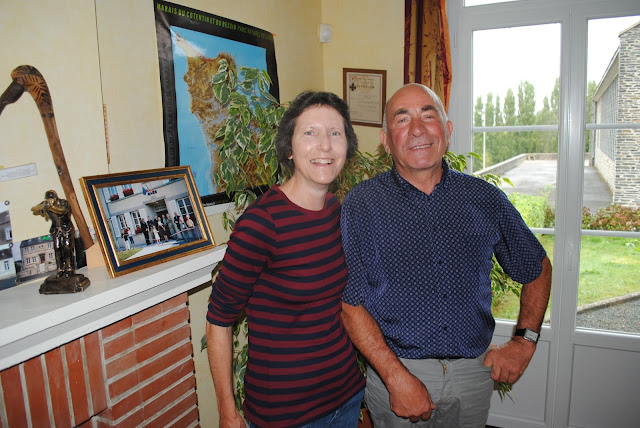 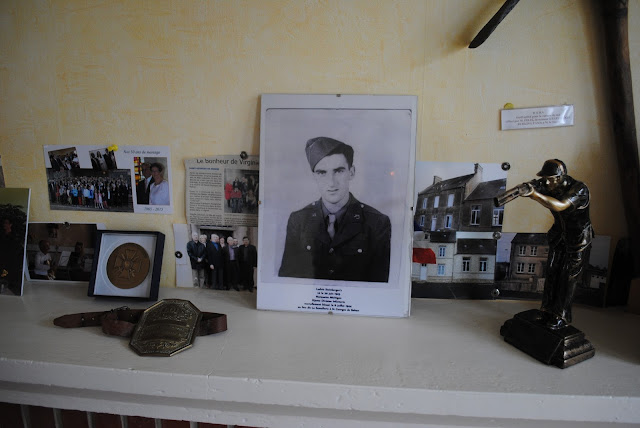 It's funny; we're not related to the Steinberger family, nor were we even born until two decades after Steinberger died in France. But Jean-Paul explained it all quite simply. He said that a small town like St. Georges-de-Bohon never got the chance to thank the people who set them free back in 1944. so when they do get the chance they make sure they say “thanks” the best way they can. And since we're from the same town as Steinberger, and have gotten to know several members of his extended family, that makes us “family”.

Family to Ludvic Steinberger, and family to the people of St. Georges-de-Bohon. And I don't think we'd have it any other way.

Following the ceremony (and don't worry, the juice in the picture of the celebration was for me because I was driving) we made it to Ste. Mere Eglise where we met up with our friends Henri-Jean and Yvette Renaud. Henri-Jean was the son of the town's mayor during the Nazi occupation, and after the war his mother would put flowers on the graves of the Americans buried in the town's cemetery and send pictures back to their grieving parents. She became quite famous doing it—Life Magazine even did a story on her—and all of her sons have carried on her memory. That's how we met him a few years ago, and that's why Henri-Jean and Yvette invited us to their home for dinner tonight.

It's quite the honor to get the invitation, and the dinner lived up to the hype. The food was amazing, the conversation stimulating, and company simply incredible. So all in all, I guess it was worth putting on pants this morning. Ignore any complaining I may have done earlier.

In and around our appointments we were able to do a little sightseeing, most of which had to do with me going ga-ga over Tour de France stuff. As I had mentioned on Saturday, every little town around here went all out when the Tour passed through in July, like the people in nearby Chef du Pont-- 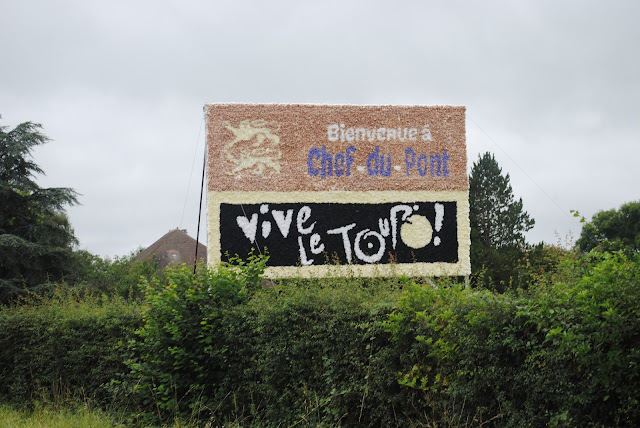 But Ste. Mere Eglise was the place where they introduced the riders the day before the race, and every window of every store had decorations like this-- 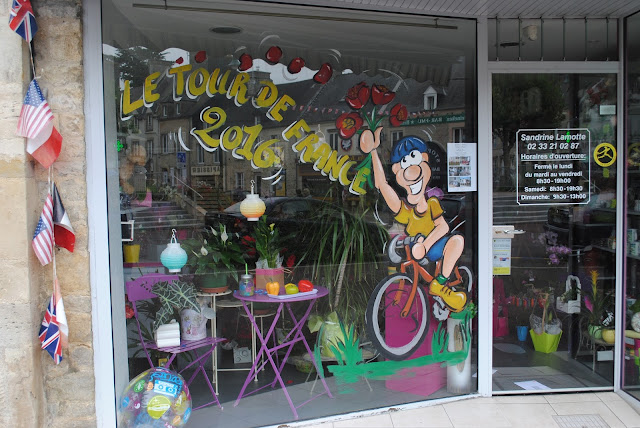 All the decorations were tailored to the specific business—the bakery had a rider with a loaf of bread, the bon-bon store had a rider with bons-bons and the florist a rider with flowers. Maybe it's a good thing, then, that we didn't see the window of, say, a plumber. Or a proctologist.

Ste. Mere Eglise is actually more famous because of the paratroopers that landed prior to the D-Day invasions. And that had led to a little creativity on the part of some shop owners. When you know that the paratroopers are actually part of an “Airborne” division, the name of this beauty shop becomes quite cute! 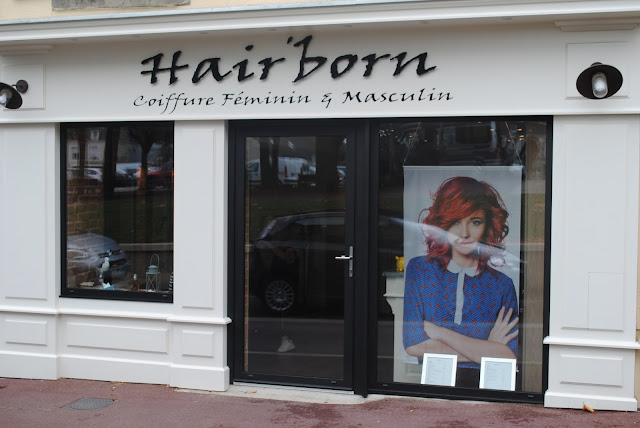 Finally, here's another kind of flower you don't often see where we live. As always, if anyone has any idea what it is, I'd love to know-- 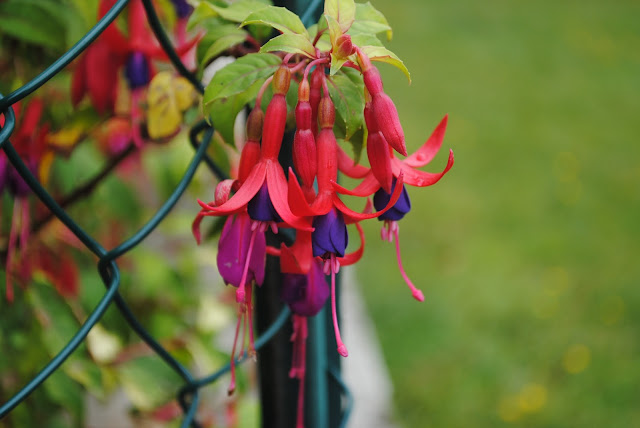 Tomorrow, we return to being vacationers, at least for a day. Our main objective is a place we haven't been able to actually find before. This time, though, we're determined to do it. So wish us luck. And at the very least, I'll be able to wear shorts again!