And greetings from Europe, where for the first time in three trips our luggage actually got here at the same time we did.

Actually, if you want to be technical, greetings from Chartres, France, which was our little one day detour before we get to Normandy. Those of you who follow along on all of these little adventures may remember that Chartres was the one good discovery that was made during the World's Smallest Hotel Room Tour of 2014, and we wanted to come back and see if it still held it's charm. More on that in a bit, but with a small spoiler alert--

First of all, I'd like to pat us on the back for an amazing little achievement we pulled off this morning. Everyone has always told us that rush hour traffic is heck in and around Paris. I can't say I'm surprised; after all, it is a city of 8 million people, all of whom apparently think of driving as a contact sport, so we've always tried to avoid driving anywhere near the city during a rush hour, especially between 7 and 9 in the morning.

Well, today our flight was early. Really, really early. So early, in fact, that we were on the ground at Charles de Gaulle at 6am local time and had the rental car ready to go an hour later, which meant that we were about to drive out of the city right as the fabled morning rush hour was set to begin.

We tried stopping in Roissy, which is the city where we always spend our last night before flying home, and killing some time, but that didn't work. So we decided to bite the bullet, and relying only on a set of printed out instructions to get us from Roissy through metro Paris to Chartres, a route we've never driven before, we headed out in what some people have described as the worst rush hour traffic in Europe.

Two hours later, we were in Chartres.

I'm not saying that to brag; after all, the directions weren't perfect, and we just kind of winged it as we headed around the outskirts of Paris, hoping it would work out. Luckily it did, and luckily I can now say I've driven during the rush hour in Paris, what most people consider the worst on the continent. I'm not sure I'd wanna do it again, but I can now scratch THAT item off any death-wish bucket list I may have had. Oh, and in that drive (and right afterward) we stopped at four grocery stores before 11 am, too.

But not that I'm bragging.

Why are we in Chartres? Well, partially because of this amazing piece of architecture-- 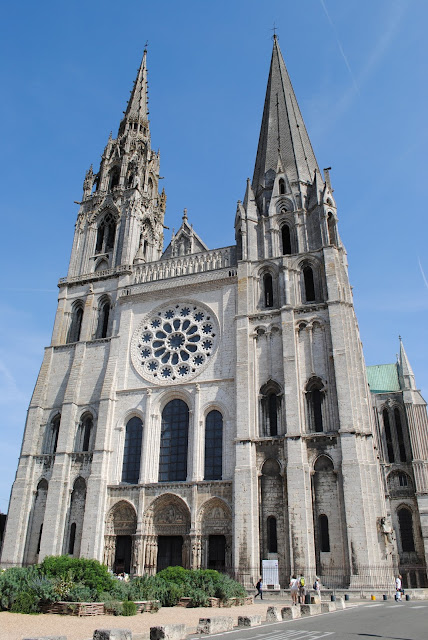 A UNESCO World Heritage site that has to be seen to be believed. It was built starting around 1200, and it's filled with with amazing stone work-- 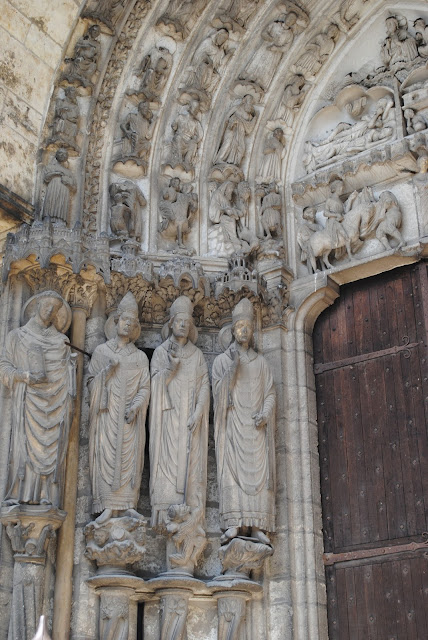 Some a little bit beaten over the centuries-- 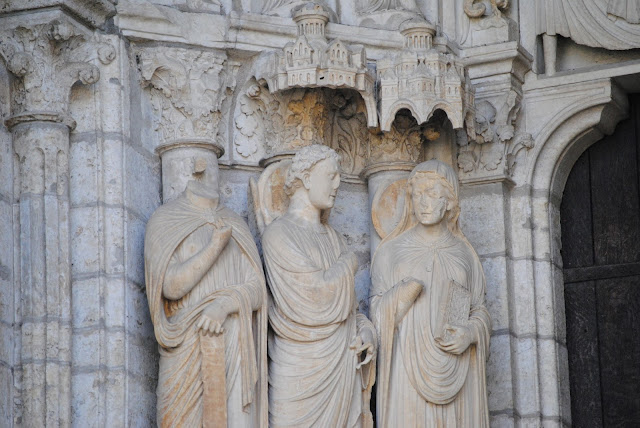 And with gargoyles as far as the eye can see. 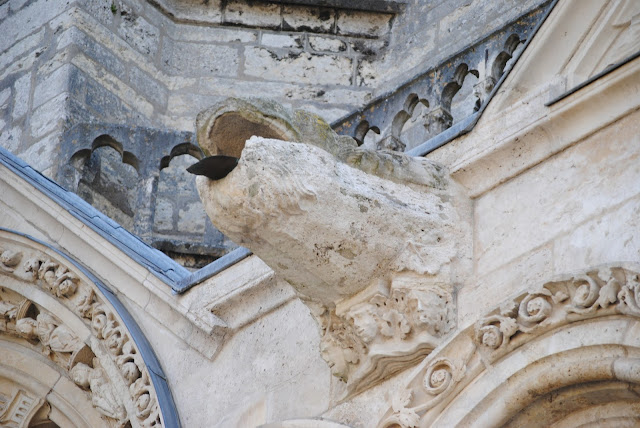 Here's a neat fact of gargoyles that even I didn't know about until last year. Were you aware that most gargoyles are gargoyles to help drain water from the roofs of old buildings? Yup; in fact, if you look at the picture above, you'll notice a drain pipe coming out of its mouth. That's to ferry any water that builds up off the roof of the cathedral. So I'm guessing that if you ever see see them during a rainstorm, thanks to all the water draining, you'll be seeing what looks like a gargoyle with an extreme case of explosive vomiting.

Aside from the cathedral and it's vomiting gargoyles, Chartres is an amazingly beautiful place, with streets that look like this-- 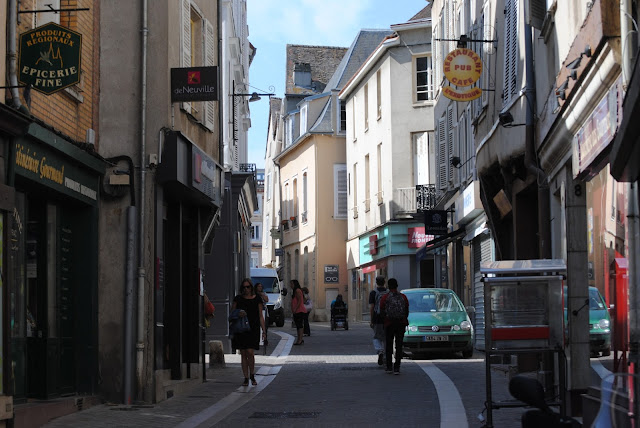 The river Eure running through it... 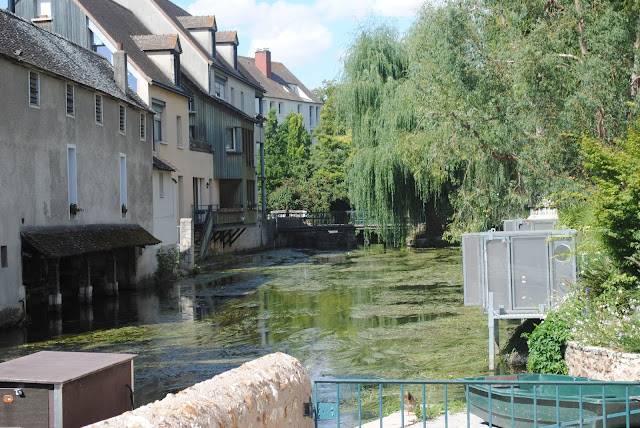 And a park that provided Loraine and I with a perfect spot for a picnic lunch on an 85-degree day. 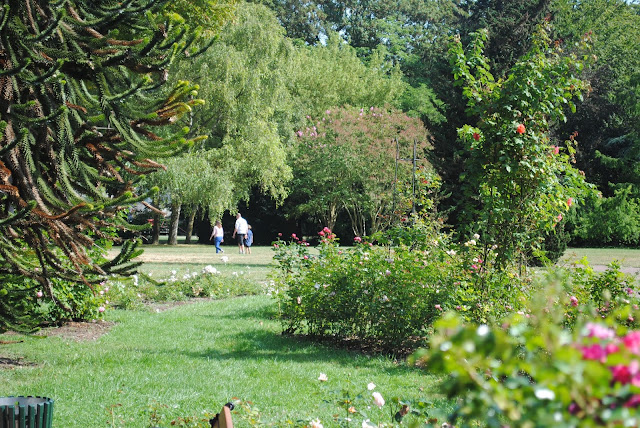 By the way, those of you who know me know I know nothing at all about flowers, and this park had an abundance of these purple flowers-- 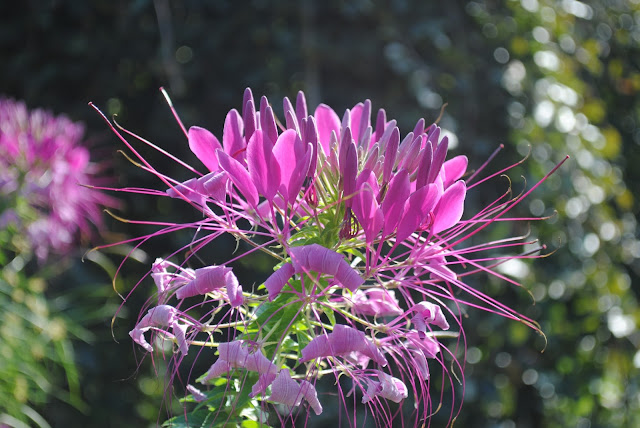 Anyone have any idea what that are?

Finally, Chartres may have provided me with one of the most amazing pieces of chocolate I've ever eaten (and I've eaten a LOT of chocolate). It was this, from the Atelier de Chocolat-- 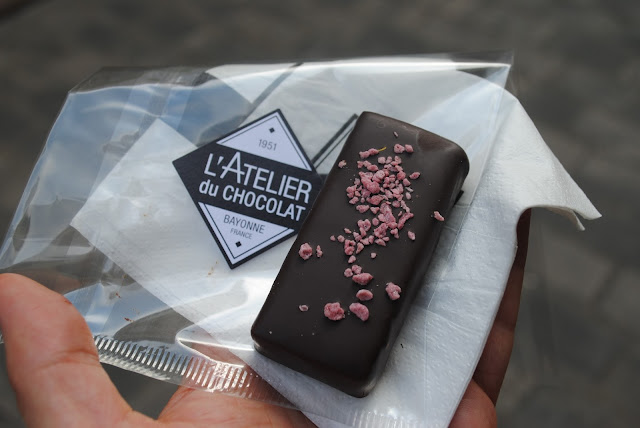 Called a Framboiser, it s a dark chocolate mousse type thingee, infused with raspberry liqueur, and then covered in dark chocolate.

It was heaven. Pure, chocolately heaven.

Tomorrow, we head back to Bayeux for the first time in four years to start our adventures in Normandy. And since Chartres really doesn't have much of a rush hour, at least compared to Paris, I think driving will be a little less stressful than it was today. So until then...