When you don't drive very much in your normal life, hitting the road in France can be a sweet, sweet treat.

Greetings again from Bayeux, where we've returned after some time spent in our second favorite place in France, Avranches. Today was another one of those days where we started driving in the morning and pretty much kept going until we got back here seven or eight hours later. We knew we wanted to get to Avranches, but in keeping with the credo I espoused a few days ago we just took the unbeaten path. And it was sweet. Like I said, I don't drive much when I'm home. My feet and/or my bike are my main methods of transport. But for the nine or ten days we're on the road here it's an entirely different way of life. And unlike back the the U.S., the roads (especially on the unbeaten path) can be twisty, turn-y, occasionally narrow, and and in all just a blast to drive. Of course, that could change if a farmer decides to pull his tractor out in front of you, or if you forget that on some country roads the old French law of “Priorite a droite” (which means that someone approaching from the right, even if you're on a main road and they're on a dirt lane, has the right of way) still exists. And even though both of those did happen today, it was still a whole lot of fun.

Especially because I don't get to do it that often.

If you're curious as to what we're driving over here, take a look at the last car in the long line of cars-- 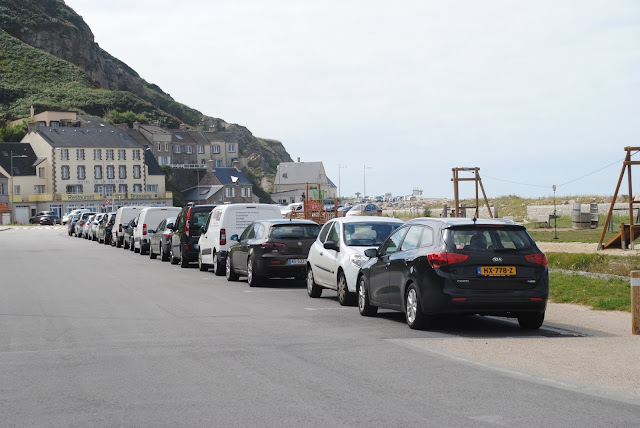 That's our Kia Cee'd (yup; that's how it's spelled), a nifty little 6-speed sedan with (inexplicably) Dutch license plates on it. Even though we picked it up from Avis at the airport in Paris, we still have a car with Dutch registration, which was kind of funny a few days ago when we were cruising along the French shore, stopped to take one of those scenic shots I posted on Tuesday, and had a couple in another Dutch car say “hello” to us in Dutch because they thought we were fellow residents of the Netherlands.

Thankfully, the Dutch word for “hello” is “hallo”, so we were able to get out of that with a minimum of effort.

Anyway, back to the road. Our journey to Avranches included several unexpected stops, including at this bridge-- 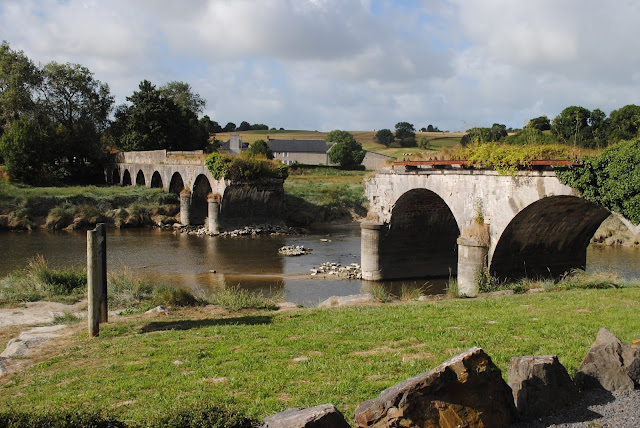 It's not often you see a bridge blown in two, and according to the memorial placed nearby it was caused when Canadian pilots bombed it in a attempt to stop Germans from leaving the area in the summer of 1944. Unfortunately, there was another bridge nearby the Germans could use, so the bombing was kind of in vain, but it sure made for a good photo op. It also served as a reminder, as Loraine often comments, that there was more to the Normandy campaign than just the beach landings. Many things we've seen this week have proven that point.

Oh, and the donkey in the field across the road says “hey”. 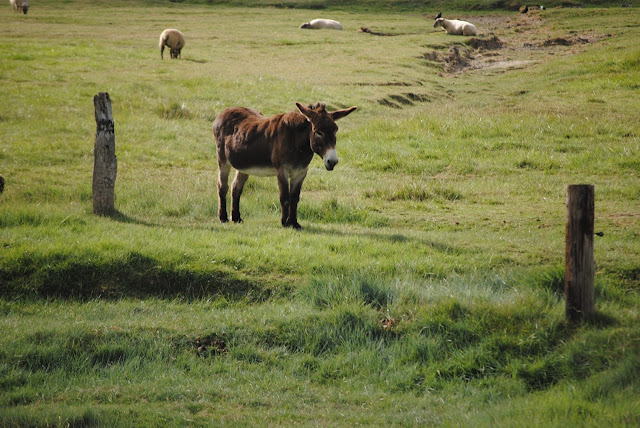 We made another beach stop, too, this one near Regnesville-sur-Mer. From the town we saw a point of land sticking out in the ocean, noticed there was a road leading to it, followed that road, and saw another empty beach! 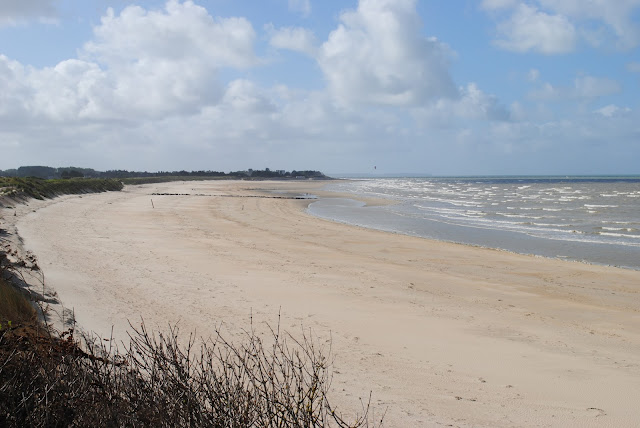 There were actually people camping nearby, and several people flying kites on this very windy day, so it wasn't as bad as the totally empty beach on Saturday. But at least the view was amazing!

We eventually made it into Avranches (and as an aside, Loraine took a great picture of the town sitting atop the hill with her camera as we drove in, but some idiot forgot to bring the cable for the camera, so we'll have to share it at a later date) and immediately headed to one of our favorite places there, the Jardin Publique-- 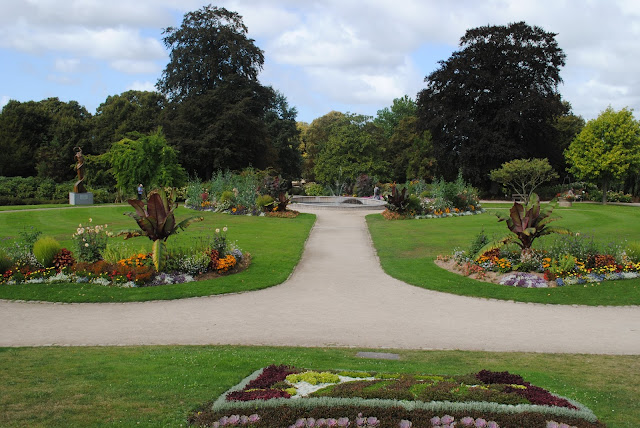 This one, aside from the usual flowers and trees, also has an amazing view of the number one tourist attraction in France, le Mont-St-Michel-- 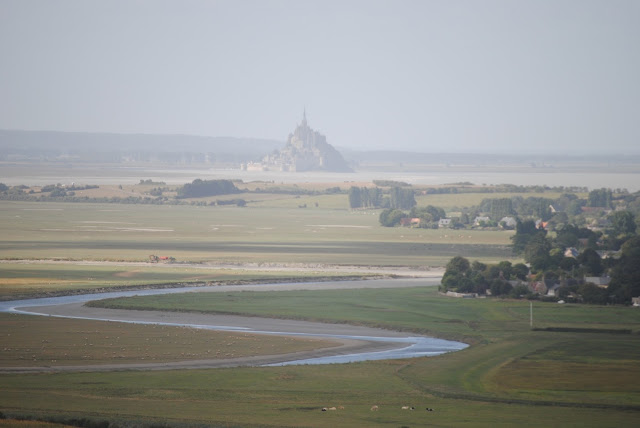 There were so many flowers and so many different colors that I didn't know where to point my camera, so I just started snapping-- 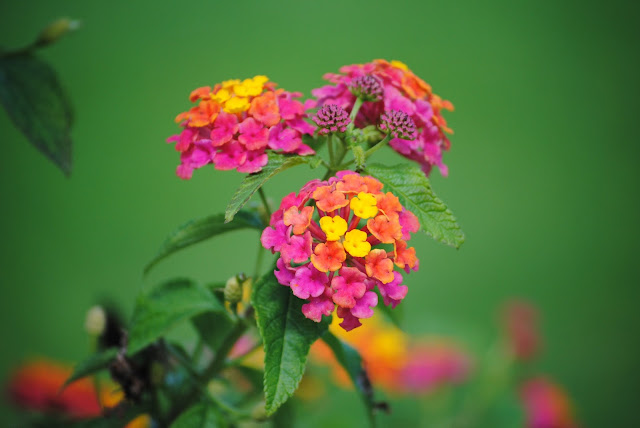 And even had a butterfly photobomb one of the pictures-- 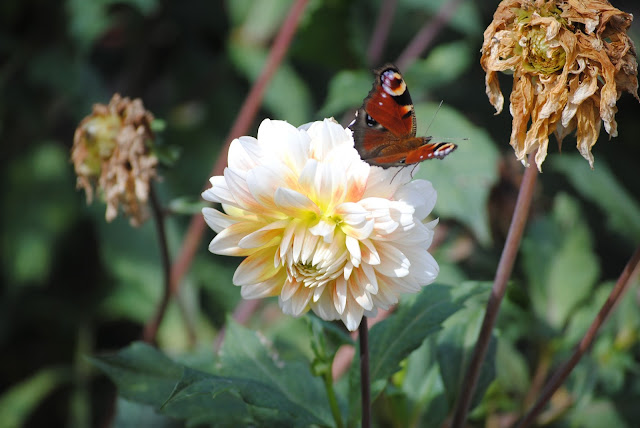 I know I've been asking you guys to identify a lot of flowers I've been shooting, and thanks to those of you who've shared your thought. I actually ended up buying a book today on the flowers of France, so from now on I'll try & figure them out myself.

And to Loraine's Aunt Suzanne, who says she'd been enjoying the flower pictures, you should see the ones we haven't put up!

We ate lunch in the garden. On the way there, we had stopped at a market to see what kind of chocolate they had when we also noticed these-- 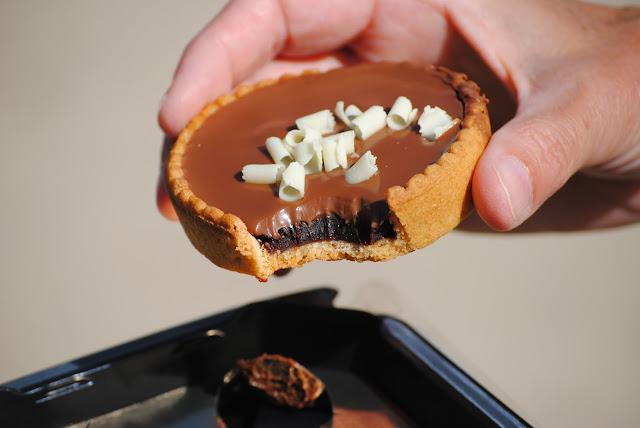 That is a dark chocolate hazelnut tartlette, a tartlette that may just redefine the words “delicious” and “amazing”. And the neat thing about that? That wasn't the best food we ate today.

More on that later. First, let me introduce you to the view from Caumont-l'Evente-- 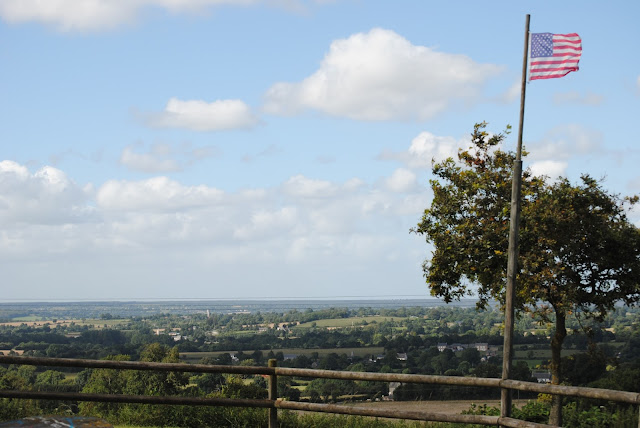 This is actually looking toward Utah Beach, which accounts for the American flag in the picture. For several trips now, Loraine and I have visited this outlook to try & see the landing beaches, only to be waylaid by fog or rain or both. So when we were making our way back to Bayeux and found ourselves approaching the town, we remembered the outlook, thought things might turn out better on a sunny day, and viola...

Upon returning to Bayeux, we decided to return to last night's restaurant, Le Marsala, to try several of the pasta dishes (as opposed to the pizza of last night). And for as good as the dark chocolate hazelnut tarlettes were (and you know how good they were) these dishes may have been even better. Loraine tried asparagus ravioli in an asparagus cream sauce-- 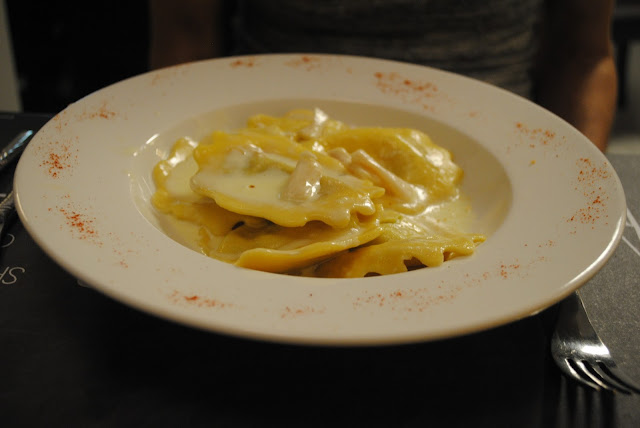 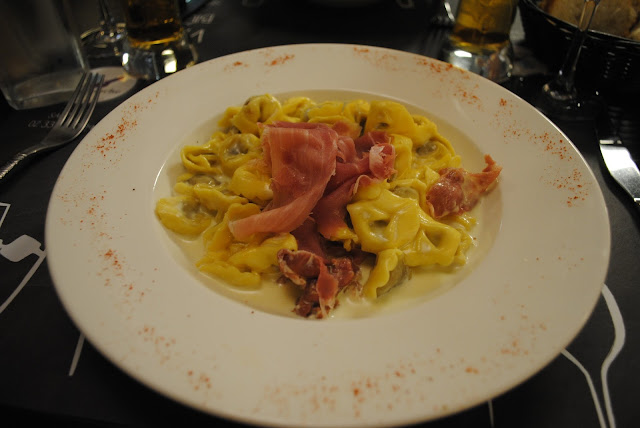 A dish that was so amazing that I honestly wished it would never end. Thankfully for my waistline it did, but I really do think it would've been worth gaining a few extras pounds just so the pasta would never be finished.

It was heaven in a bowl.

Okay, I notice this is getting little long, so I'll wrap it up with two things. First of all, I lied yesterday when said you wouldn't see any more Tour de France related pictures-- 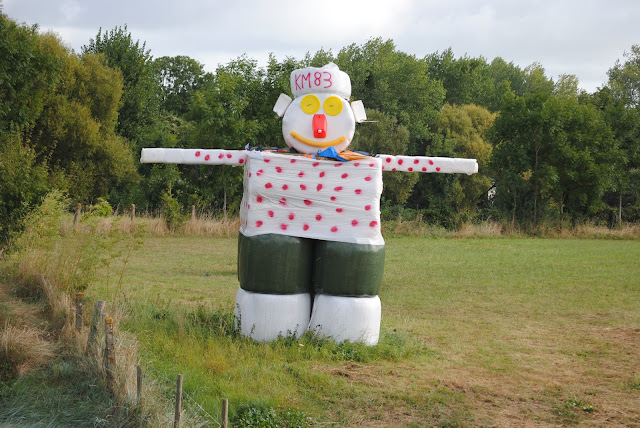 Well, maybe not lied so much as forgot that we'd be returning to an area where the race passed through on the opening day. So my mistake.

Secondly, have you ever been lucky enough to see a coin operated washing machine outside of a grocery store? Well, now you have-- 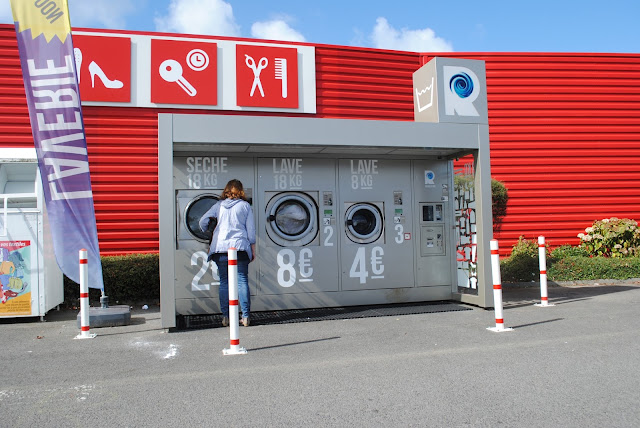 This was actually outside of the Casino store where we bought the tartlettes. I'm really not sure why they have an open-air laundromat outside of the store. Maybe it's so you can wash while you shop, or maybe if you have really long arms you can use it as a drive-through laundromat. Either way, there you have it.

Tomorrow, sadly, is our last full day here, and we'll be hitting those long & windy roads once again in search of amazing views, this time courtesy of the Vire River Valley. So until then, save your change.

After all, I know a washing machine where you can use it!