You know, it’s amazing what you can find around the next corner.

We discovered that several times today as we spent 7 or 8 hours driving around southern Normandy.  We had a couple of things we wanted to take care of, the first of which was a return to the town of Mortain.  We visited Mortain briefly last year; basically, long enough to head to the top of the hill on which the town sits and enjoy the spectacular view, a breathtaking view that extends for kilometers and kilometers.  This year, I wanted to take pictures of the town, something I didn’t get to do last year, and we also wanted to retrace the steps of PFC Everett Beerman of Big Bay, who was a member of the 134th Infantry Regiment of the 35th Infantry Division.  Unknown to us when we visited Mortain last year, Beerman died trying to defend the hill from a German attack.  Because it has a spectacular view that extends for kilometers and kilometers, it was high ground that both sides wanted.  After a long and very bloody battle, the Americans kept control of the hill, but not before many died, including Big Bay’s Everett Beerman, who was killed on August 12th, 1944.

We actually started in the town of Romagny, which sits at the base of the hill that holds Mortain.  Take a look at this picture, then imagine having to claw your way up it under fire.  And just so you know, the picture only shows the very lowest ring of homes in Mortain.  The hill itself goes up over 600 feet. 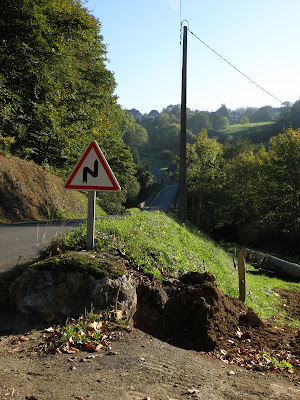 By the way, Beerman is buried in the Brittany American Cemetery in St. James. 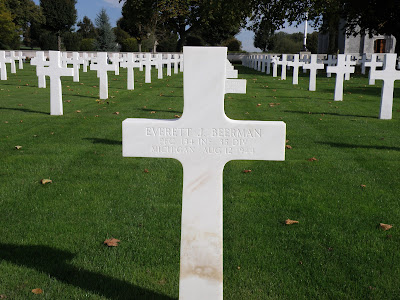 We stopped by there to say ‘hi” to him today, where we were also inundated with tribbles.  But I’m getting ahead of myself...

After we left Mortain, we found ourselves driving around many more corners until we ended up in the town of Vire.  Vire’s been around since Roman times, and was once the home of one monster of a castle.  How do we know it was a monster of a castle?  Parts of one wall still remain, and to give you an idea of just how much of a monster the castle was, see if you can spot Loraine in this picture-- 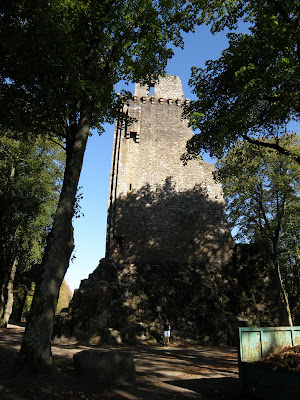 I have no idea why, but every time I look at this picture I hear Billy Crystal saying “Have fun storming the castle”...

After Vire and visits to a few other places, including an amazing public garden in Avranches, where you can see Mont St. Michel (the Statue of Liberty of the French tourism industry) from 12 miles away, we ended up at the Brittany American Cemetery, and when we walked into the place and turned the corner, saw nothing but tribbles— 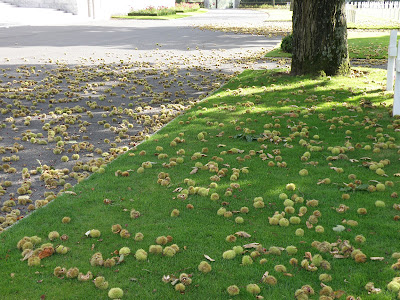 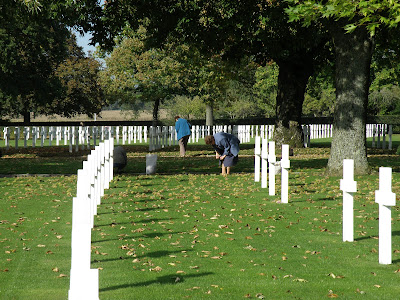 I’m thinking these are French bakers gathering the chestnuts to use in those heavenly pastries of which we’ve been eating waaaaaaay too many since arriving.  Nice to see they don’t let them go to waste, though.

The final surprise around a corner came as we were leaving the cemetery, and Loraine noticed that there was a sign for a nearby orientation table.  They have a bunch of those here in France; basically, they’re maps placed atop a big hill pointing out what you can see in the distance.  And as we were driving toward the table, we saw something else that caught my eye.  I didn’t think I translated it correctly, until we found this and found out I HAD translated it correctly— 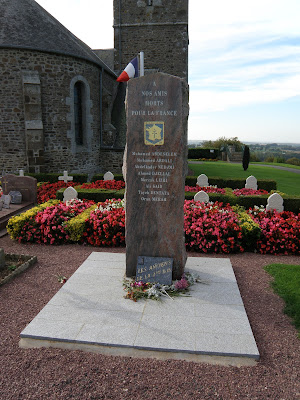 Like I said...sometimes, it’s amazing what you can find by just going around the corner here .

Tomorrow, the story of how NOT to be an obnoxious American in Paris (or anywhere in France).  By the way, if you have any questions or comment, feel free to drop me an e-mail or leave a comment here.  I’ll see if we can answer ‘em!