I bought a frog today.

That’s how we wrapped up the final day of action on this trip, a day that began with a wasted hour as we tried to find a location that the Michelin Green Guide said was supposed to have a great view of the city of Cherbourg and the surrounding ocean.  Unfortunately, the Green Guide did not have very specific directions.  And unfortunately, unlike many French cities, Cherbourg does not have any of its roads marked with either signs or directions, and we couldn’t for the life of us find where we wanted to go.  Every other French village, town, and city has ample signage so that both residents and visitors know where to go.

Unfortunately, Cherbourg does not.

So after that wasted hour, we gave up on finding the view the Green Guide said was so great.  Instead, we went to find another hill, one Loraine found not in the Green Guide but in a special section of a French newspaper she picked up last year.  And thanks to that newspaper, we found ourselves driving up a very long, curvy, and narrow road, where we found a church and an observation platform, where we saw views like this— 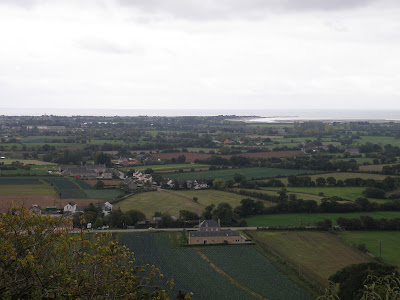 You could see for miles and miles and miles in several different directions, made all the more stunning by the fact that the vaunted Michelin Green Guide didn’t mention it, and a little local newspaper supplement on the 65th anniversary of World War II did.

(By the way, I also found my mom’s flowers for the day there—) 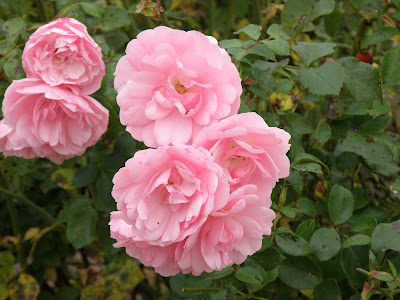 That whole drive, along the Utah Beach coast where several of the men Loraine’s researching came ashore, had some wonderful opportunities for taking pictures.  Here’s a shot from outside of the town of St-Vaast-La-Hougue of fishermen gathering mussels left by the retreating tide— 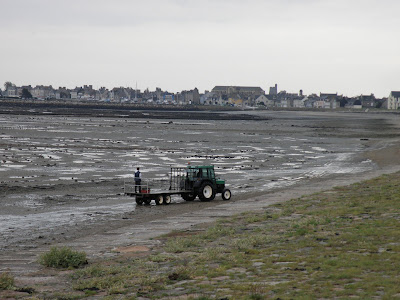 We spent a large part of the late morning and early afternoon just driving along the beach, enjoying the sights and stopping to check out a few memorials.  Our other primary task for the day was to visit a small road upon which PFC Arthur Lemieux of Marquette, a paratrooper in the 505th, spent part of his final day.  Last year, as you may remember, we found the exact field where Lemieux was killed; this year, we tried to follow the path he took as he headed toward that field.  It was basically a long tvwo-track dirt road, where we walked for more than a mile seeing nothing but grass and a lot of cows.  This cow, in fact, took a particular interest in us— 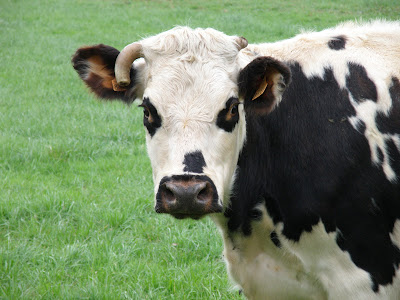 While I have a strange fascination with taking pictures of cows, I don’t know that much about them.  So it was interesting whenever we walked passed one and would see the cow’s nostrils flare.  Apparently, that’s their way of checking us out, and making sure we’re not dangerous.  Either that, or they were just insanely curious as to why we were walking up the road.  It hasta be one of those two.

We then made our way back to Bayeux and washed and gassed up the car.  The lines at some of the gas stations were insanely long; one of the ongoing strikes about the raising of the retirement age is being led by workers who are blockading the exits from some of the country’s oil refinery plants, which means that some stations could run out of gas soon.  Luckily, ours is filled up, clean, and ready to go.  We just have to hope that the car rental place doesn’t find a nick or dent that we didn’t see when we checked it over today.

After getting the car prepped, we walked down to several of our favorite patisseries, which is where I bought the frog I mentioned at the beginning of this.  C’mon now...you didn’t think I bought a REAL frog, did you?  Imagine what the people at U.S. Customs would think about that.

Instead, I bought a marzipan frog— 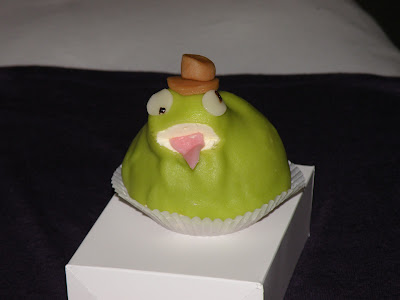 I think I’ve mentioned before about just how artistic bakers can be over here, and our frog proves it.  Every single color of marzipan you see on the frog is a different flavor, and all those flavors surrounded a yummy cake & cream interior.  Aside from frogs, they also had cows & pigs, as well.

But we settled for the frog, and it was delicious.

Tomorrow, we drive back to the Paris suburb of Roissy, home of Charles DeGaulle International Airport, where we’ll spend our final night before heading back home.  But before that, we have one more market day here in Bayeux (goody!)  So until tomorrow night from outside of Paris...