Oh, don’t worry. . .Loraine’s feet aren’t very sweet either, an unavoidable consequence of wearing the same shoes and socks for almost 40 straight hours now.  In fact, the only time our shoes were removed at all was to go through security in Marquette and Chicago; after that, they stayed on our feet as long as WE stayed on our feet.

And trust me...that was quite a long time!

The flights over here were almost picture-perfect; leaving Marquette, we got to share a plane with the NMU women’s volleyball team.  And on the way over here, there was nary a screaming child or coughing adult to disturb the flight in any way.  Of course, when a flight’s 8 hours long, overnight, and going through 6 different times zones...it’s admittedly a small thing, but it’s nice nonetheless.

Leaving Paris by car wasn’t a problem; unlike last year, we actually followed the directions we printed out and made it to Bayeux.  And we have a cool car this year, a Citroen C5 with one very peculiar trait—

It doesn’t have any cup holders.  Go figure.  By the way, remind me about it later, and one day I’ll post a picture of our chariot.

Anyway, I’m writing this in front of the open window of our hotel room in Bayeux.  It’s 73 degrees, and this is what I‘m looking at-- 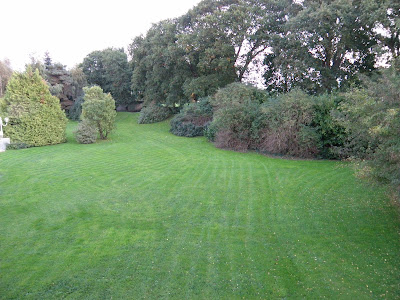 I know I babble a lot about Bayeux in here, especially after we stayed here the entire trip last year, but it’s such a picturesque little town that you can’t help but do so, especially when you walk down the street and see a scene like this— 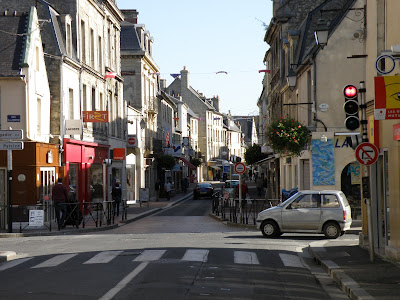 That’s Rue St. Patrice, the main street here, just wide enough for one car with all kinds of little shops up & down the way.  Yes, we did stop and have a LOT of baked goods and yes, we did stop and look at a ton of restaurant menus, but when you come back after being away for 13 months, what else are you expected to do?

The one thing we noticed by being here in October instead of late August or early September?  There aren’t any tourists.  And the streets seem almost kind of, well, dead.  So we also took the time to stop and check out the Cathedral again-- 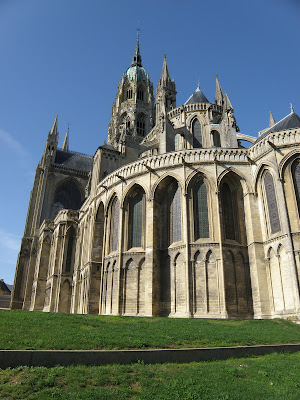 They started building this structure in 1074, and finished it about 400 years later.  It’s so massive, you can see if it from the English Channel, some 10 miles away.  And now the people of Bayeux have raised over 3.2 million Euro to fix some of the bell towers and gargoyles.

I think the people in this town REALLY love that building!

I’m looking forward to getting a little sleep tonight, as is Loraine.  We have a full day of driving in a big circle tomorrow, as well as meeting with three different people on two different subjects.  Check back here any time after, say, 4 pm your time tomorrow for a full update!