After 9 days, 2,700+ kilometers, and not a scratch on the car (which I’m sure Avis appreciates) I’m done with driving in France, at least for this year.

We made it back to the Paris suburb of Roissy-en-France, where we’re spending our final night in Europe before heading back to Marquette tomorrow.  We’ll wake up at 1:30am Marquette time (730 am here, so don’t panic) and make it back to Marquette just after 8 pm local time.  So that’s...let me think here....about 19 hours of traveling, most of it either in the air or waiting in line in airports.  But we’ll then be home, and this adventure will take its place in the history books.

Once again, bummer.  But not necessarily in a bad way. 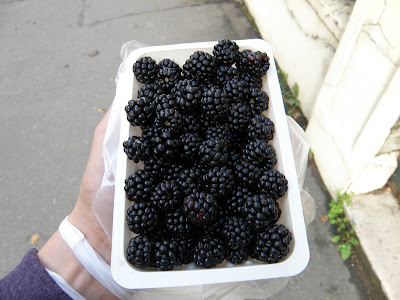 By the way, that entire package, which was almost half a pound of blackberries, cost just a Euro and a half, which works out to around 2 bucks American.  And they tasted like they were picked yesterday.  Just heavenly.

We also made one final pilgrimage to our favorite local bakery.  I know I’ve babbled a lot about it in here, so I’ve decided to show it to you! 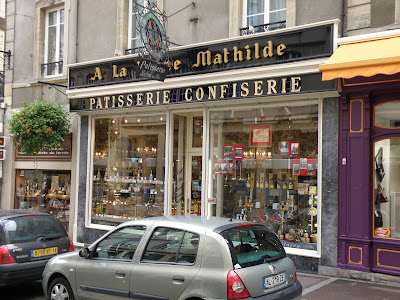 Those things we get all the time, those feuilletines?  These are them— 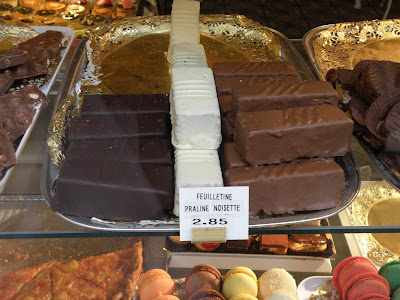 And trust me, a picture doesn’t do those tasty wonders justice.  Oh. . .I also can’t forget my mom’s flowers for today, either, courtesy of a merchant at Market Day— 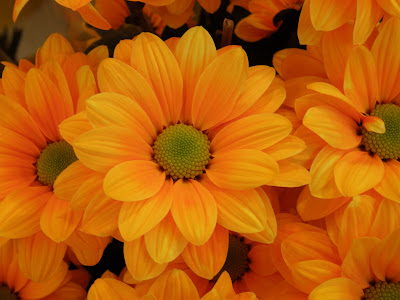 You may be interested to know that she’s leaving the hospital today, just a mere five days after the accident.  She faces a long period of mending, but I have no doubt she’ll be back to fighting strength in no time.

Three and as half hours after leaving Bayeux (and one nice traffic jam in Paris later) we dropped our rental car off at the airport (a very nice experience this time; I highly recommend Avis if you’re driving in Europe) and hopped the shuttle to our overnight hotel in Roissy.  This is the fourth trip where we’ve spent at least a night here, and we like it quite a bit.  It’s an old small town surrounded by a bunch of new hotels.  You walk across the road with the hotels and you’re transported to a nice little village, with a park and a few quaint shops.  You just need to follow signs like this— 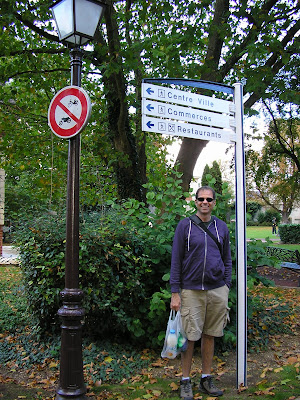 One of the things the town does every year it to put up a public display of pictures in the park, a display that deals with a certain theme.  Last year it was France by air; this year, it’s the history of Roissy itself— 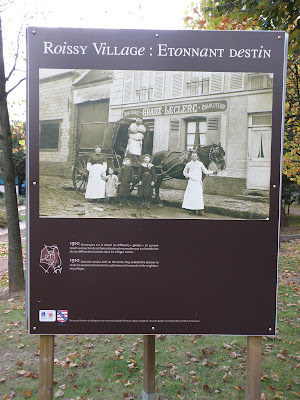 This one actually tells the story of how the town butcher would put bells on his horse wagon when he drove through town to let everyone know he was coming...kinda like a modern-day ice cream man!

Now, we just sleep and get ready to go home.  I’ll be writing another blog on the plane tomorrow.  When it gets posted, I have no idea, but it'll be written.  There are so many things about which I still wanna talk, plus put the wraps on the whole experience.  Not only that, but I also have dozens of pictures I want to show you that I haven’t had the chance to yet.  So that’s tomorrow...or whenever I can get internet.  I will, however, be posting Twitter and Facebook updates as we head along, and the Twitter updates appear on the top of this page.  So if you're REALLY bored and want to follow along, you know what to do.

Before I go for today, two people I need to thank.  The first is Kristy from AT&T, who once again set up my phone so I could call back reports to you guys every day.  It also became an invaluable tool on the day my mom was hit by the car.  I have no idea what I would’ve done without it, so Kristy, you once again have my sincere thanks for setting it up.  You rock!!

The second person I need to thank is the person without whom this whole trip would not have been possible.  I know how much work Loraine puts into planning each of these expeditions, and I don’t think I have ever been anything less than blown away at the results of all that hard work.  Once again, my dear, you’ve given us an experience of a lifetime, and for that you have both my love and my mouth widely agape at the wonder of it all.  Thank you very much, and like I said before, Happy Sweetest Day!