I’m flying at 32,000 feet over the north Atlantic as I write this, my laptop scrunched on my lap so tightly I can barely see the screen, all because the lady in front of me, in an Ambien-induced haze, has her seat back so far back that every time I breathe in I inhale some of her hair.

Oh, the joys of international travel. . .

I said I’d write another one of these blogs on the plane, and I certainly want to keep my word.  We made it out of France no problem, and just have to make it to Chicago, through the joy that’s known as U.S. Customs, and then back to Marquette via American Eagle.  At least that’s the plan; if you’re reading this, you know the plan worked.  If you’re not reading this...well, then I did a lot of typing (on a screen I can barely see) for nothing.

Okay...what didn’t I write about in here that I was gonna write about?  Let’s start with one of the things that actually connects some of us, radio.  Unlike the U.S, France doesn’t have stations that individually program music or talk, instead having nationwide networks so you can hear the same thing wherever you go in the country.  The network that we listen to most is Virgin Radio, which gives you the chance to be exposed to pop-type music, some familiar, some not.  Two of the biggest songs over here are Maroon 5’s “Misery” and Katy Perry’s “Teenage Dreams”, as well as tracks by groups like The Muse and Indochine.  However, we kept hearing one song over and over by a guy named Julian Perreta, ended up buying his album because of it, and were happy to hear that the whole disc is actually a GREAT piece of work!  The song we kept hearing is called “Wonder Why”, and I’ll have to play it for you when we get back.  We’ll see if you get addicted to it the same way I did!

Now, let’s get to a few pictures I didn’t get a chance to post while in France.  The first is my chocolate stash! 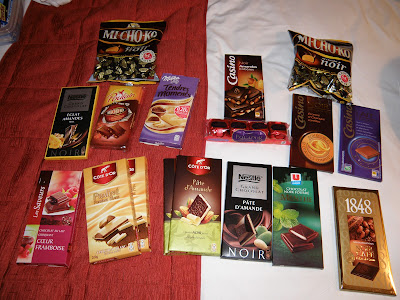 I know I always joke that while Loraine goes over to Europe for the research, I go over there for the chocolate.  That picture probably proves the point, although it should be noted that Loraine actually ended up buying MORE chocolate that did I (if that’s even possible).  So chalk that up to being birds of a feather, I guess.

While in France we were also munching on some local cereal.   Here’s one that I found quite tasty— 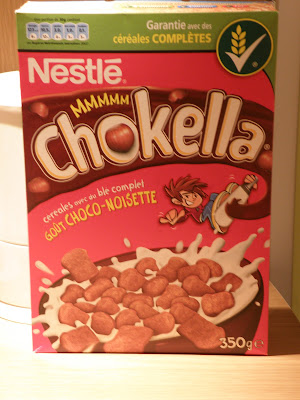 The cereal was actually little chocolate and hazelnut-flavored biscuits; kinda of like eating Nutella, but in a cereal form.  As with chocolate, the cereals over in France come in combinations that you never see in the U.S., and it’s always fun to try a couple of them out.

Remember last year in Bayeux, when a gas explosion knocked out the side of a building on the main boulevard (and deprived us of a meal at an Indian restaurant)?  Well, it looks like they haven’t really done much to the building, especially the top floor, in the 13 months since— 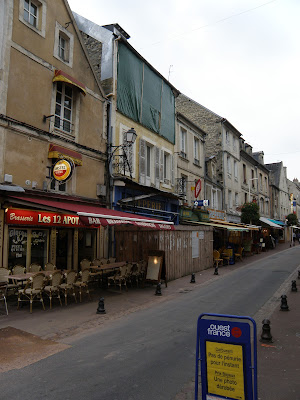 I think I wrote about how we saw people pulling over to the sides of the road to relieve themselves, right?  Another thing the French have no problem with is the public display of affection, as evidenced by this picture from a park in Avranches. 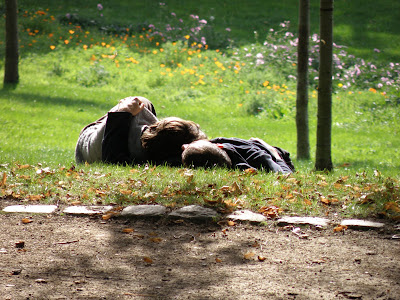 Finally, just a few of the almost 800 pictures I took, only a few of which I was able to share in here-- 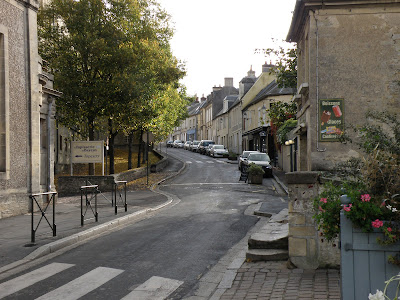 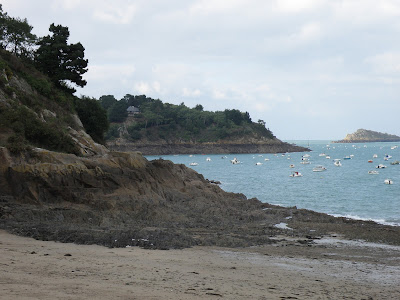 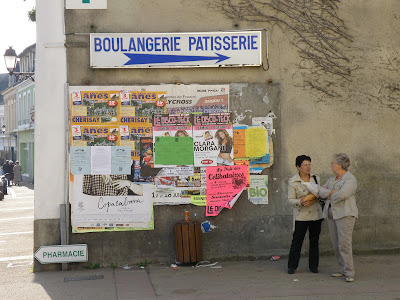 I hope you guys enjoyed following along on this little expedition; from some of the notes we received, it seems like you did.  This was one of those trips where we really didn’t know what to expect, but after meeting so many wonderful people and having so many wonderful experiences, I think I can safely say that it did exceed our wildest dreams.  So thanks for coming along.  And seeing as how the next one starts in a mere 10 months, although this time in Belgium, Luxembourg, and Germany...well, make sure your passport’s up-to-date, and that your tray table is in the upright and locked position.

Unlike, say, the lady in front of me on the plane right now.