The Second Time is NOT The Charm

As I type this, it’s 9 pm in Heidelberg, and 12 hours ago we landed in Frankfurt just fine, but with no luggage.  My parents, flying with us, also arrived safely, and WITH their luggage.  Those of you who read my daily blog may recall that, when we bought these tickets last November, that leg of the trip—Philadelphia to Frankfurt—caused major problems, because the flight was on the new merger partner of American Airlines, U.S. Airways, and American’s computer system not interfacing with U.S. Airways computer system was the reason we couldn’t buy the tickets online, had to do so by phone, and were charged a $75 for doing so, even though we couldn’t buy the tickets online and the tech support guy helping us transferred us to the phone reservation system because HE couldn’t do anything with it.  Then, when we got to Sawyer Wednesday morning, my parents received their boarding passes for all three legs of the flight, while we were only given Marquette-Chicago and Chicago-Philadelphia.  We were told to get the boarding passes in Philly—which we did, although we were given different seats than originally assigned—and then had four hours to wait before the flight began.

Four hours in which our luggage, for whatever reason, didn’t get loaded into the plane.

Thanks, American Airlines/U.S. Airways.  We really appreciate it!

(And isn’t it a pity venomous sarcasm doesn’t travel well through the written word?)

So we spent part of our first day in Europe buying essentials and a few pieces of clothing on American’s dime.  Hopefully we won’t need them.  Hopefully, our suitcases come over on the next flight from Philadelphia, which leaves a few hours from now.  Hopefully, by this time tomorrow, things will be right in the world. 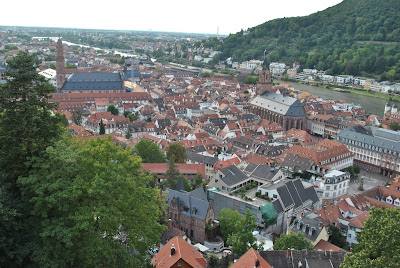 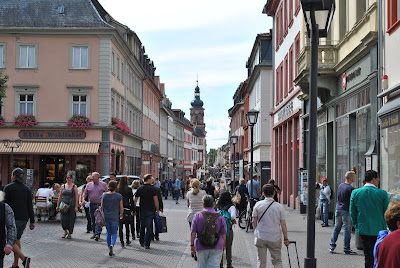 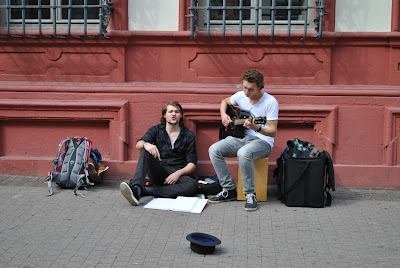 He also got most of the lyrics wrong, but, but it’s the thought that counts, right?

Oh, and Heidelberg is home to all kinds of mysterious and exotic restaurants, too! 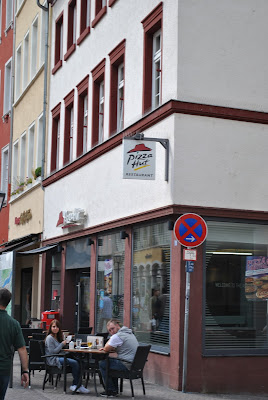 Well, actually there are some really good places at which you can eat, but what we did instead was to grab some food from a grocery store and have ourselves a little picnic on a bench on one of the most gobsmakingly cool castles I’ve ever been in— 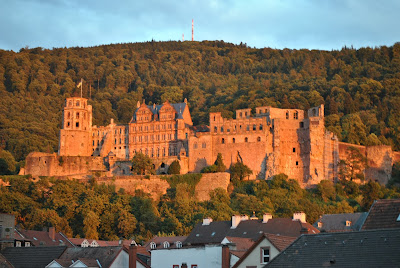 This is a castle that had its origins in the 1400s when the barons who ran the Neckar River Valley wants to make sure no one could sneak up the river without paying taxes on the passage.  That’s why the castle built way up on high, affording you picnicking views like this--- 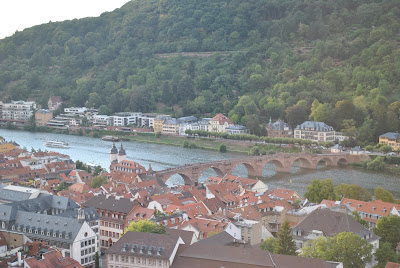 All in all Heidelberg is a very nice place.  Maybe someday we’ll even come back and visit when we have luggage!

Tomorrow, we don’t go far...but we drive through a great big forest and should be eating a lot of Schwarzwalderkirschtotre.  I’ll take a picture and share it so everyone can drool!