Can We Use Our Express Pass, Phil?

Greetings from Tubingen (pronounced “to begin”, if you’re keeping score at home, tonight’s pit stop in what’s become this year’s version of “The Amazing (Koski) Race”.  Last episode, as you may recall, had us spending a good chunk of the day trying to figure out what the heck happened to our luggage.  Today we found out what did happen to it.  It sat, for some unknown reason, at the Philadelphia Airport while we ourselves left the Philadelphia Airport (as did my parents, and as did my parent’s luggage).  So it was stuck on the next day’s flight to Frankfurt, and arrived in Germany around 10:30 this morning.

We were then given a choice—our luggage would either be sent to via DHL to one of our hotels; in this case, based on the delivery schedule, our hotel in Kempten.  The only problem is that we’re not staying in Kempten until tomorrow night, which means we’d have to go yet another day without anything except what we bought yesterday (and what we’ve been able to borrow thanks to the good graces of our parents).  Or, we could drive back to the Frankfurt Airport and pick up the luggage ourselves.

The only problem with that (and you HAD guessed that there would be a “the only problem” right?) is that when we received the call, we were two hours away from Frankfurt, and would then have to eat up the rest of the day getting the luggage.  So faced with the traveler’s version of a “Sophie’s Choice”, we decided to eat the rest of the day—including traveling through the Black Forest—and pick up our luggage.  We went back to Frankfurt, and I was able to spend an enjoyable 20 minutes dealing with airline and security officials, but as I type this, our luggage is just 10 inches away from me.

So I guess that nightmare is now over.  And I feel bad, too.  We had our parents come with us based on the fact that they’d get to see lots of things that they (and we) had not yet seen.  But I guess if you count driving back and forth on the same stretch of Autobahn twice, and getting stuck in three German traffic jams...well, then, I guess they HAVE gotten to see lots of things they haven’t seen yet.

And that’s all I’m gonna say about that.  Except thanks for being so understanding, Mom & Dad, and Mom & Dad Light.  We sure do appreciate it.

Before heading back to Frankfurt today we were able to visit a few places we wanted to see, including more of the Neckar River in Heidelberg— 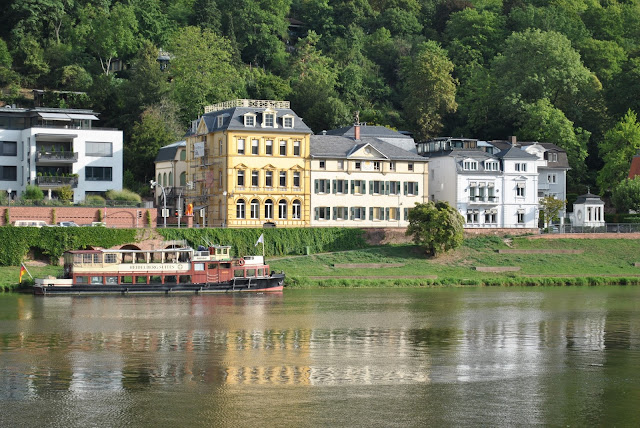 A VERY cool old amphitheater built into a mountain near there— 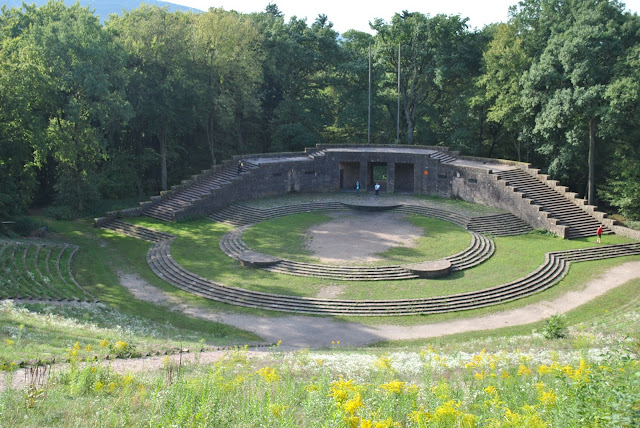 And a cemetery.  After all, you know how we love us our cemeteries. 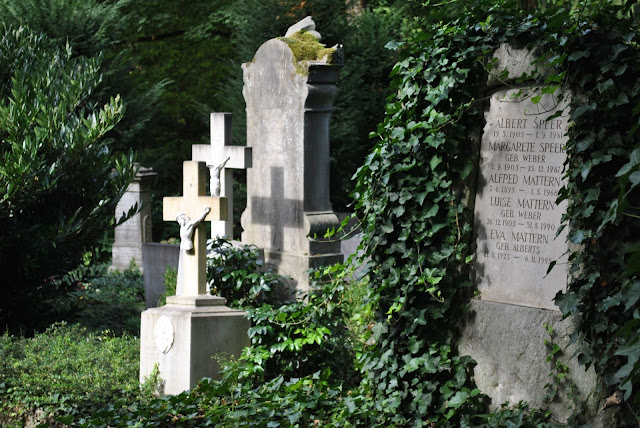 That’s when we received the call from Frankfurt, and had to head back there.  We finally arrived here in Tubingen way behind schedule, and I literally thought this might be the only picture I’d get of the place— 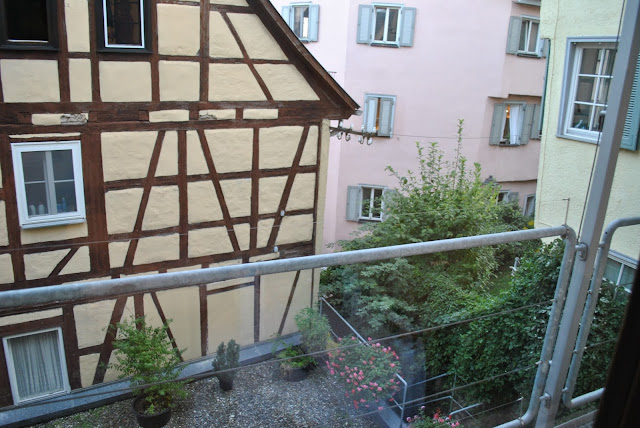 That’s looking out of our hotel window, taken just as we were walking in, and taken just in case that might be the only chance we had.  Before we could do anything else we had to make sure our suitcases were still intact and full, and try to figure out what was what and where it all was.  When we were finally able to get outside to walk around, the sun was setting, and I had no idea if the camera I had would take good outdoor pictures in light that low.  However, I soon found out. 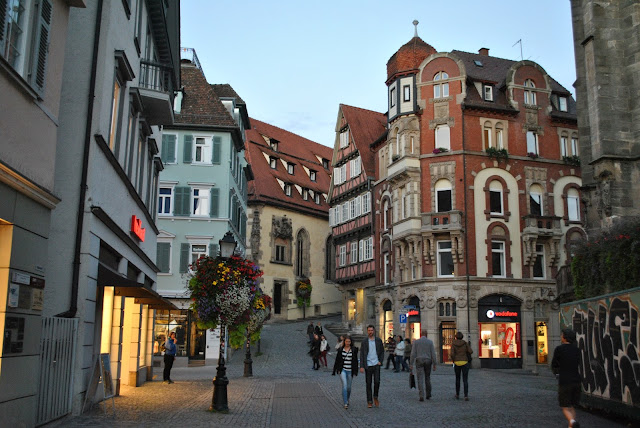 That’s part of the old town of Tubingen, like Heidelberg a city that exists because of a university and because of the tourists who visit those very old buildings.  We didn’t get much of a chance to wander around the place before it became totally dark, but we were able to see more of the buildings— 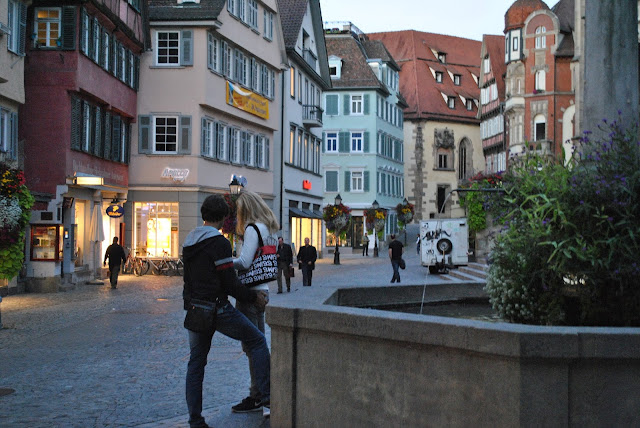 And even a clothing store or two— 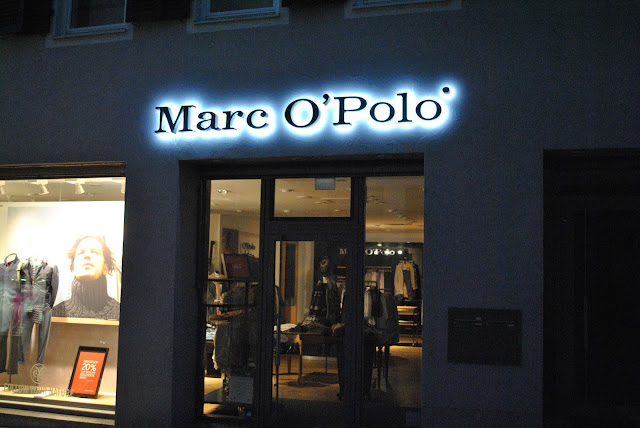 Hopefully, now that were have our luggage, this will go back from being an edition of “The Amazing Race” to just a plain ‘ol vacation, seeing the sights with our parents.  There’s also something good in it for you guys, too, as we’ll be visiting more places and I’ll have time to take more pictures!  So until tomorrow, when we start visiting the Alps...

(p.s.—no pictures of nor stories about the Schwarzwalderkirschtorte I mentioned yesterday.  Hopefully, even though we weren’t able to visit the Black Forest at all, we’ll hopefully still get to experience it, and share it with you!)
Posted by Jim & Loraine Explore Europe at 3:49 PM