Tales from the Route des Vins


I normally gain two or three pounds while we’re on one of these trips.  Today, I think I gained all that weight in just one day.

Today was the day we spent with our friends Oliver and Marie-Rose Pernot, and it was one for the record books.  The main thing we wanted to accomplish was to honor the memory of George Ritola of Republic— 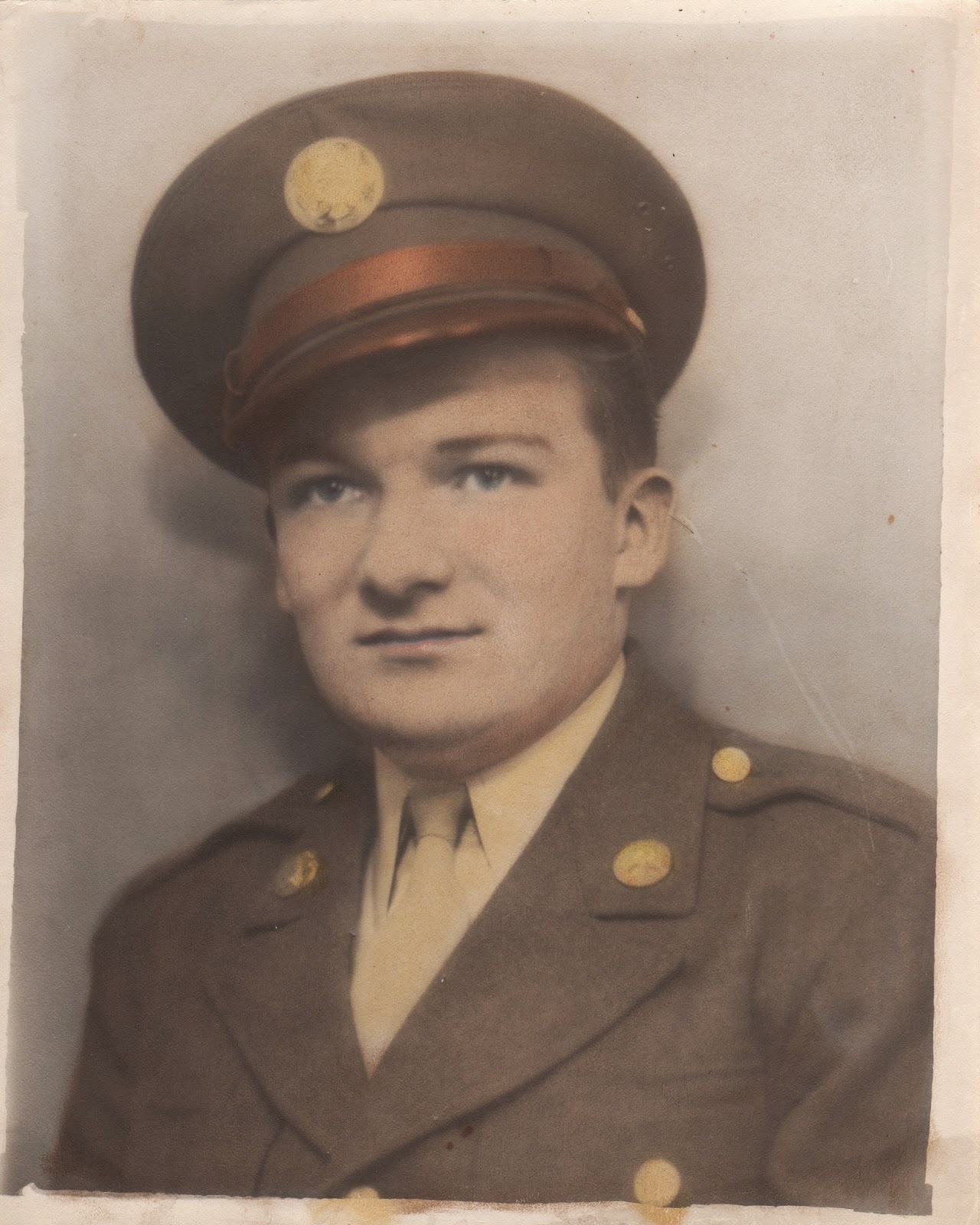 George died in January of 1945 in a little town in the Vosges Mountains called La Chêne, and last year Loraine hooked Oliver up with the Ritola family so he could help them find out a little information on what happened.  And boy, did Oliver find out the information!  After contacting many people and asking many questions, he was able to find out what happened to George on that fateful night.  As Oliver found out, he died in a farmhouse on what is now this piece of land. Descendents of the family that owned the farmhouse still own the land, and allowed us to install a little memorial to George— 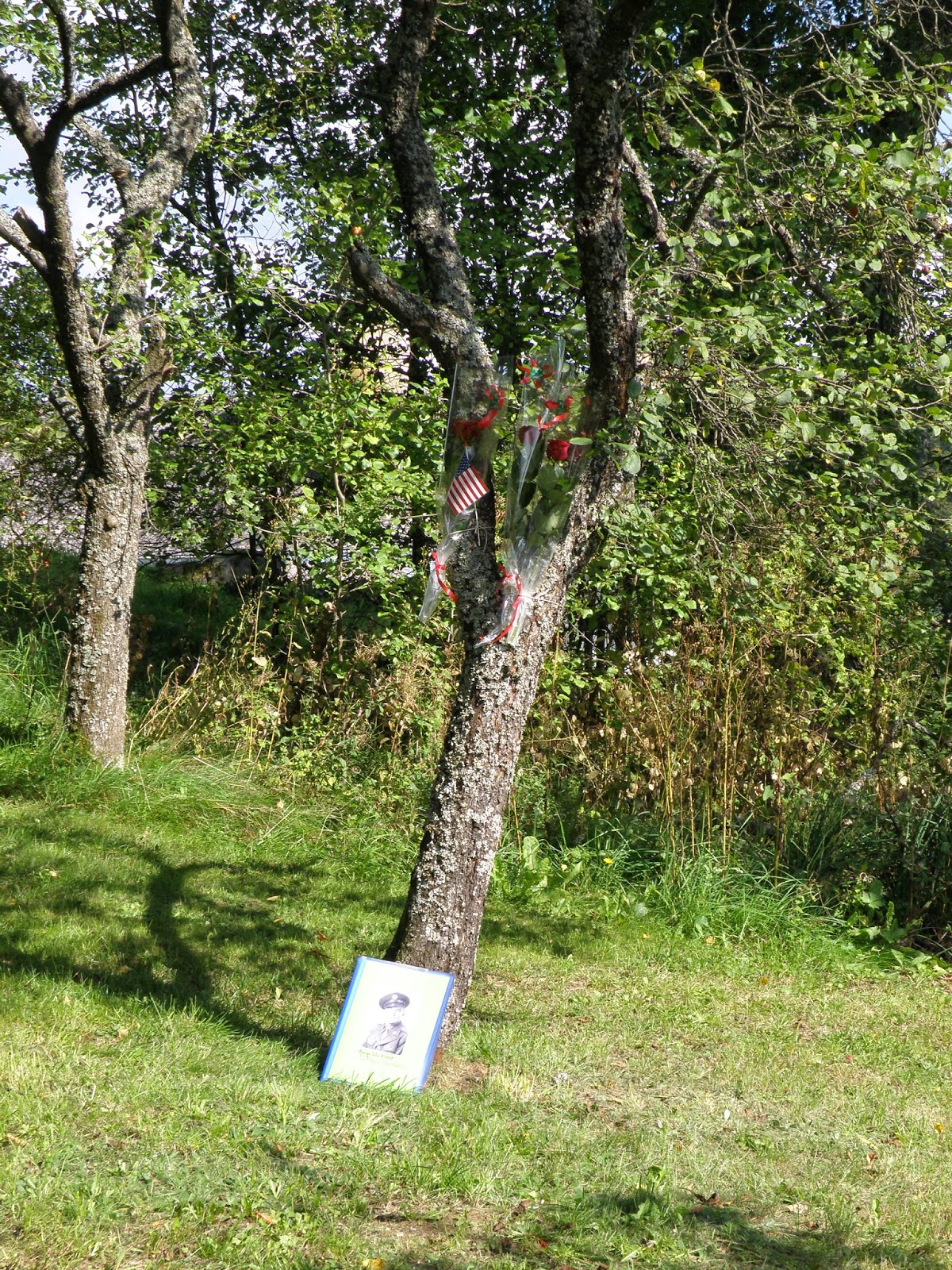 We were also introduced to the family across the street, Mr. and Mme. Minoux, and that’s when the fun began.  The Minoux’s helped Oliver find out some of his information last year, and were very interested in meeting us when we arrived.  We must’ve hit it off with them, because we were invited in to Mr. Minoux’s personal bar to partake of his vin blanc (at 11 in the morning), and he then proceeded to show us several of his mechanical projects, including a fully restored 1956 Vespa scooter, as well as a table saw—built from scratch—that he put together for a local logging and woodworking museum.

In fact, here’s the proud owner with the saw— 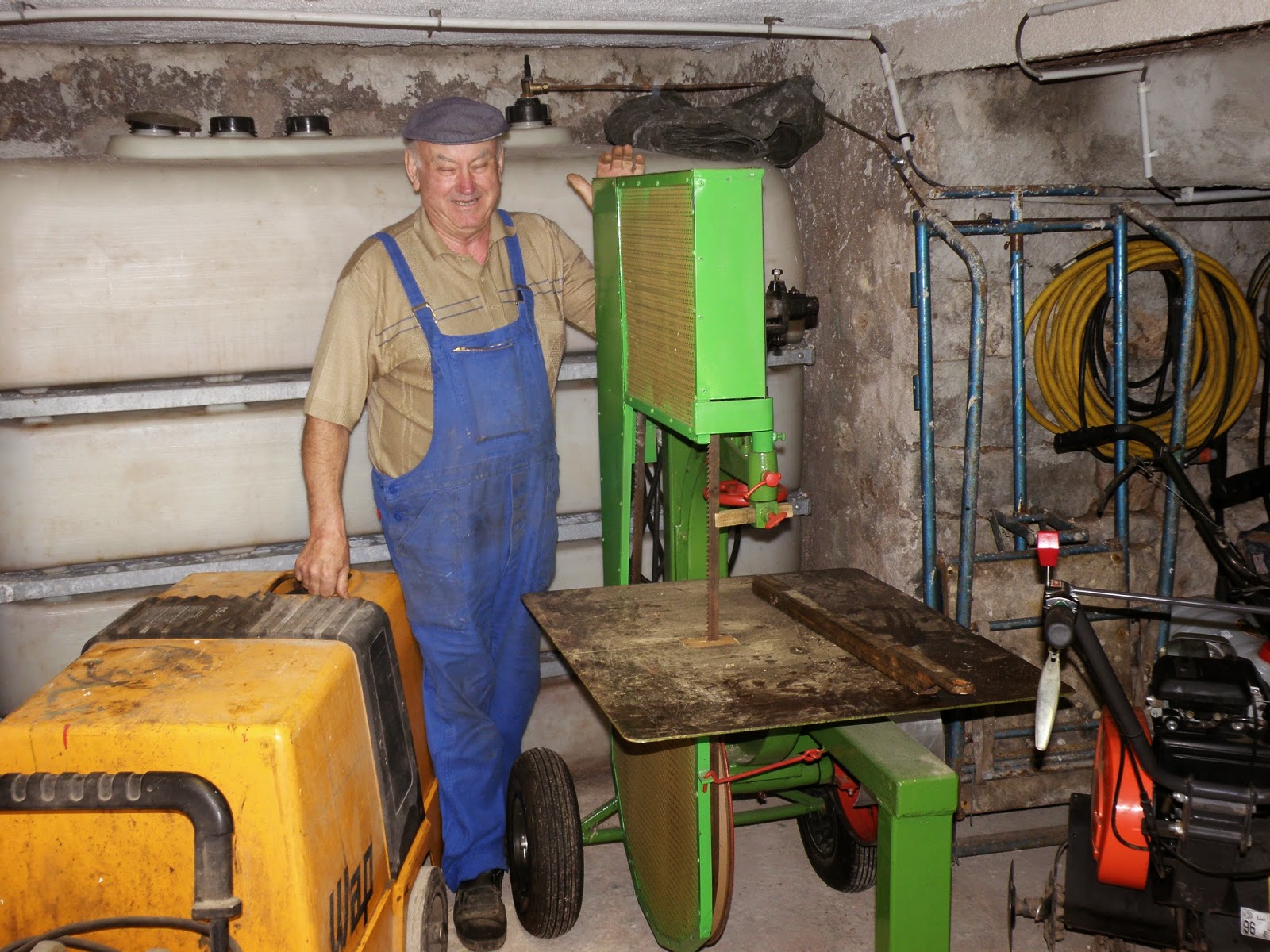 Many guidebooks will tell you—and we’ve found this to be true—that the French are very guarded in their friendships until you make a connection with them, and then you’re friends for life.  Well, today, I feel we have made a few friends for life.

After leaving Mr. Minoux’s own personal bar Oliver and Marie-Rose then took us out to lunch, a typical French lunch that consisted of a huge appetizer, an even more huge main course, and then the item that may single-handedly have caused me to gain a pound—dessert. 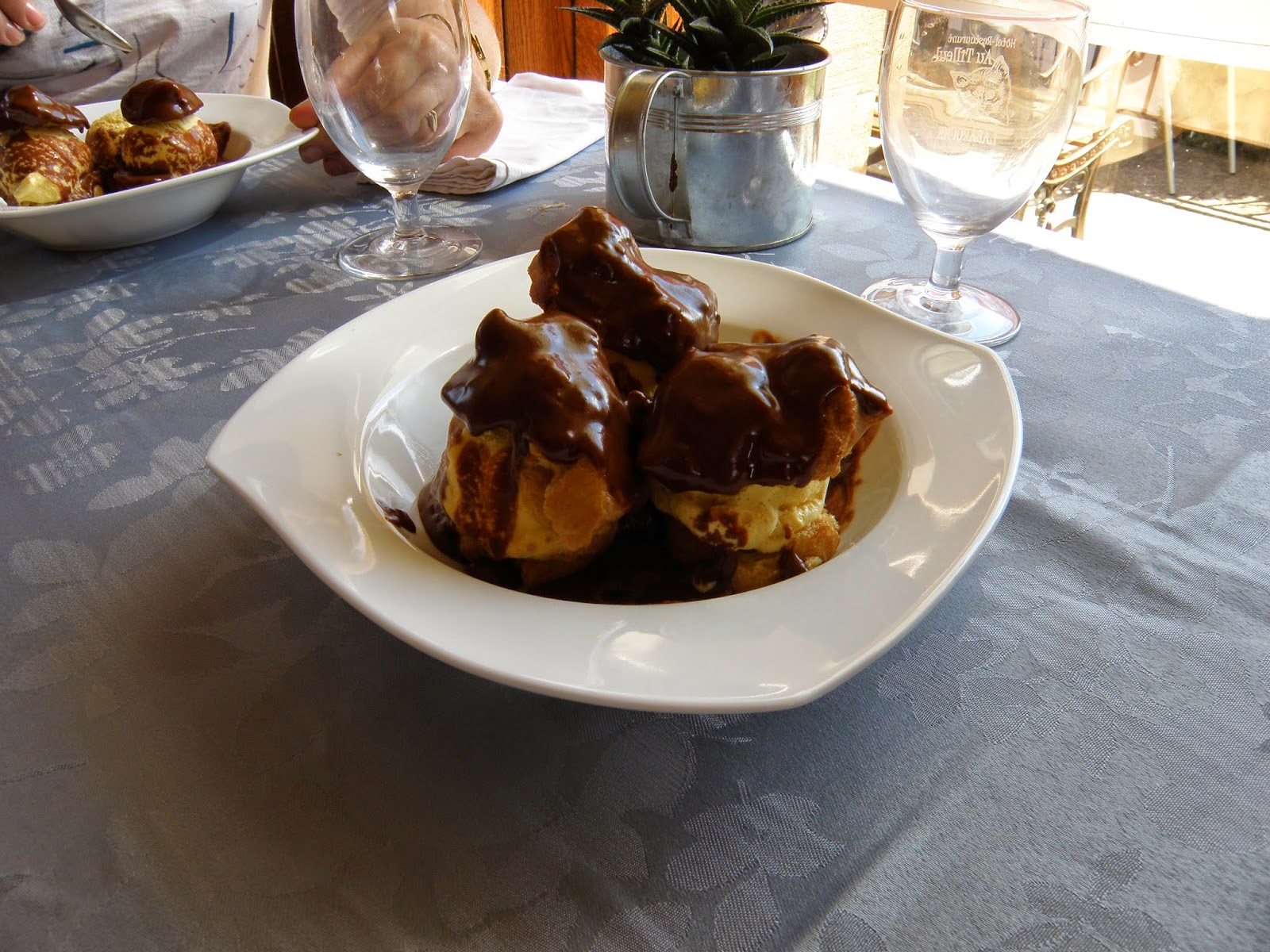 She gave me a taste of the ice cream in her profiterole, which was home-made with real vanilla and nutmeg tossed in for good measure.  It almost made my éclair pale by comparison, and that’s saying something!

Following lunch, we visited a French war cemetery, and drove around for a bit enjoying the area.  Two important things to note—this is major wine growing country, and the grapes are just about ready! 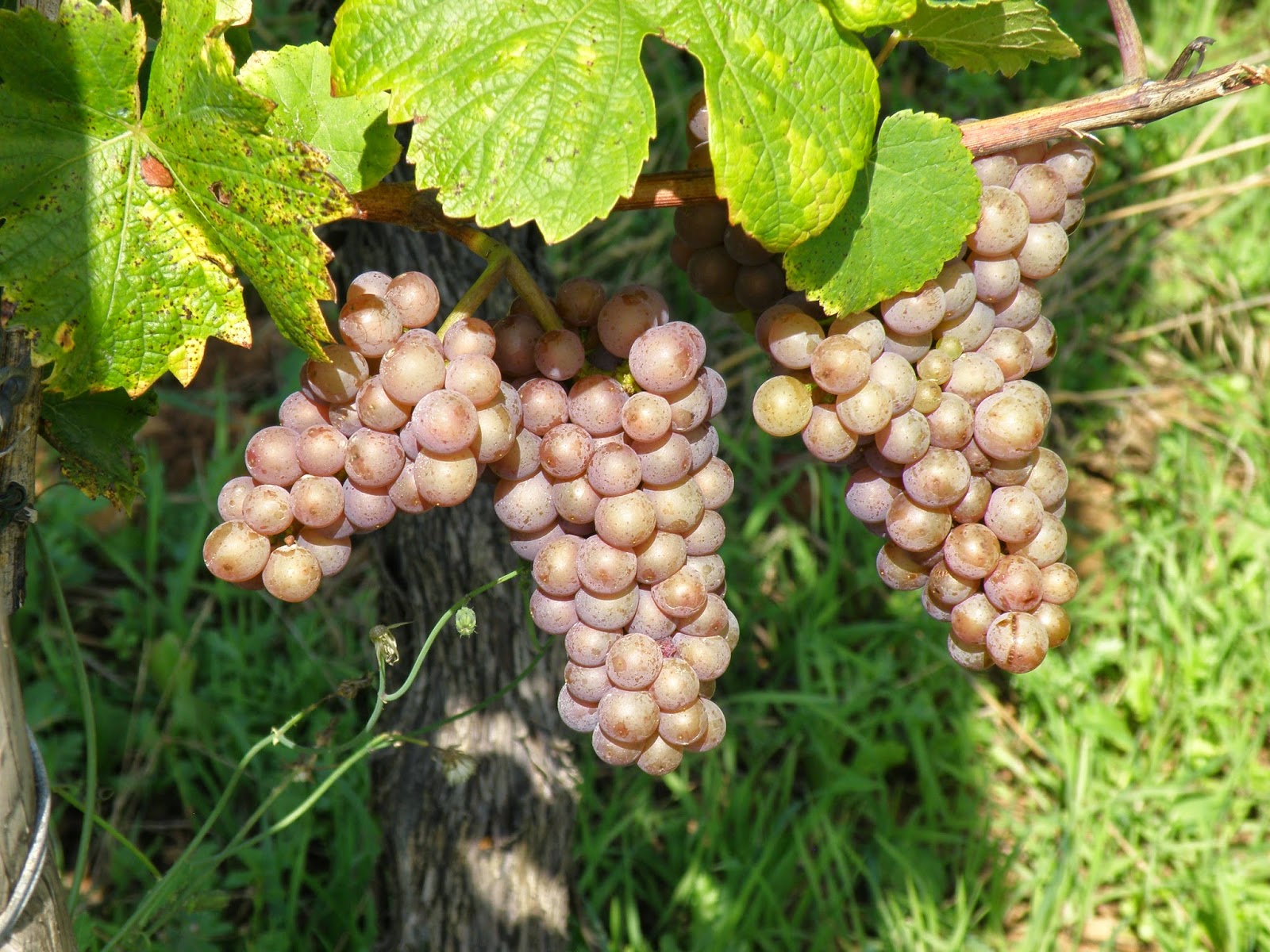 In fact, Marie Rose is heading out tomorrow to pick them for the next few days, and invited Loraine to go along.  Sadly, she had to decline.

The second thing to note?  Readers of my daily blog, people who go on any of my history tours, or anyone who read the Mining Journal a couple of Sundays ago may know of my, uhm, rather passionate feelings (well, okay, obsession) about sandstone buildings.  Well, guess what they have a zillion of around here! 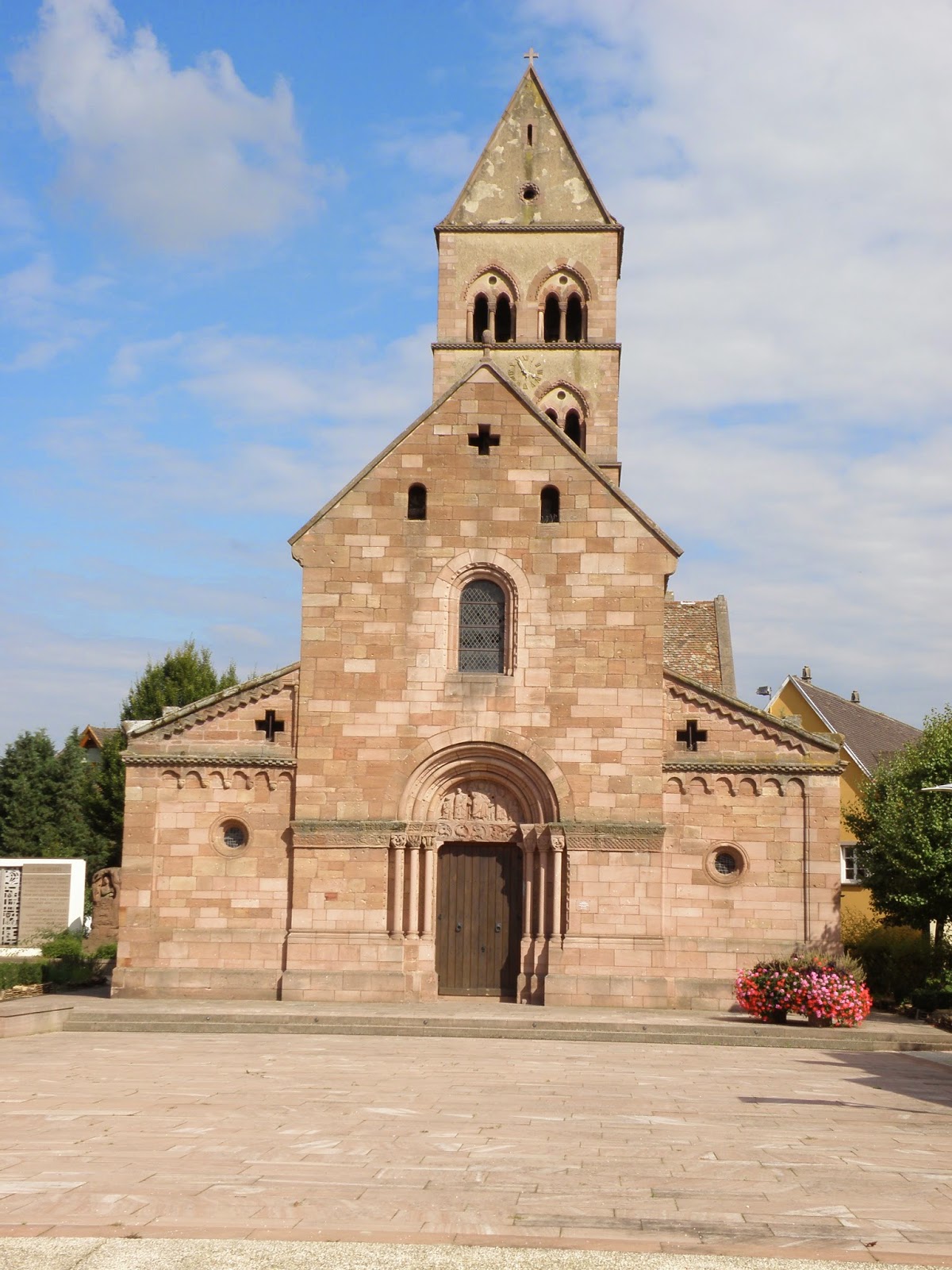 Some of the sandstone (or, as they say in French, “grès”) architecture is over 500 years old, and seems to be holding up spectacularly, which bodes well for the future of our buildings.

We finally ended up back in Colmar, where we just walked around and went “ooh”— 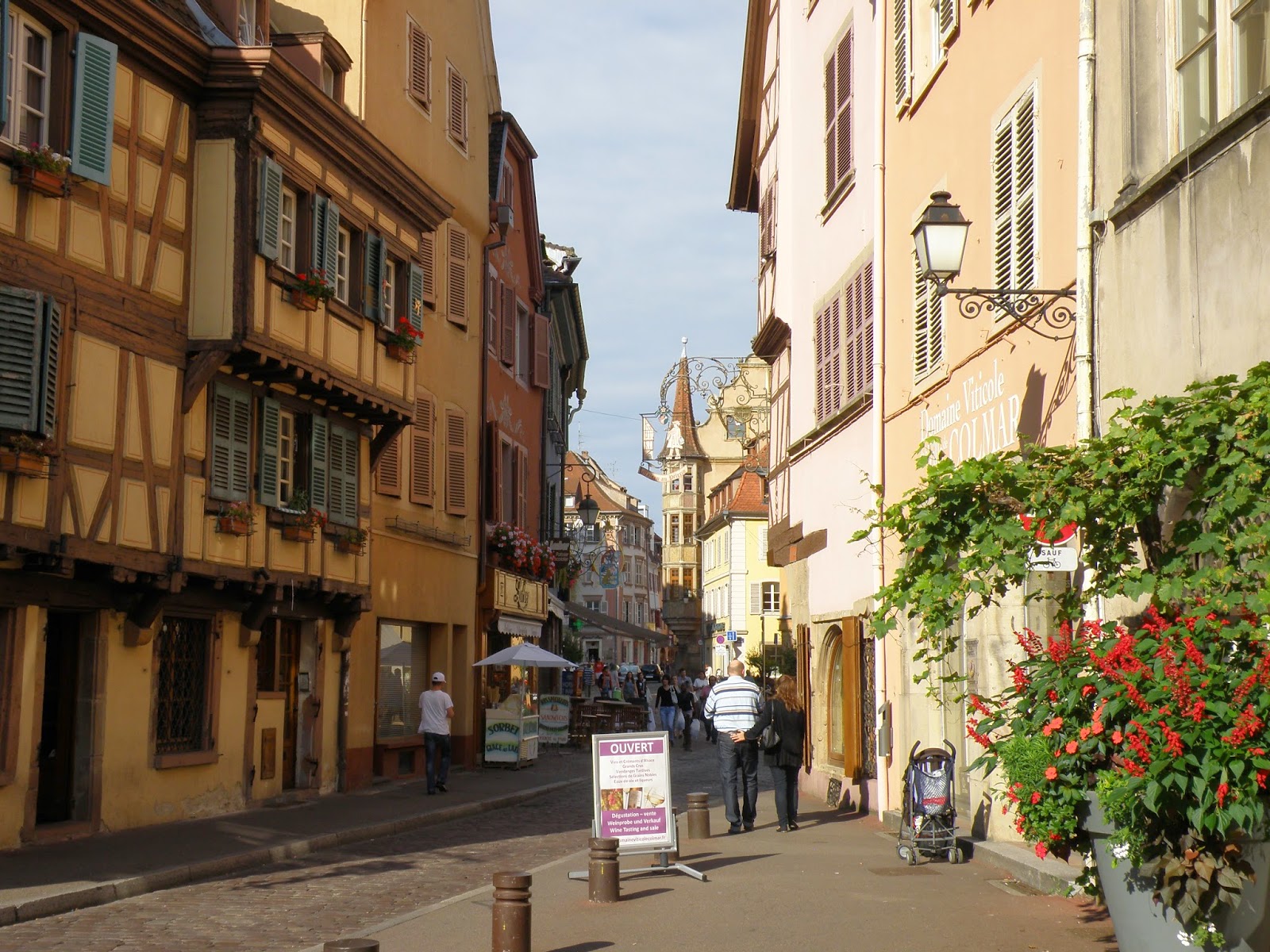 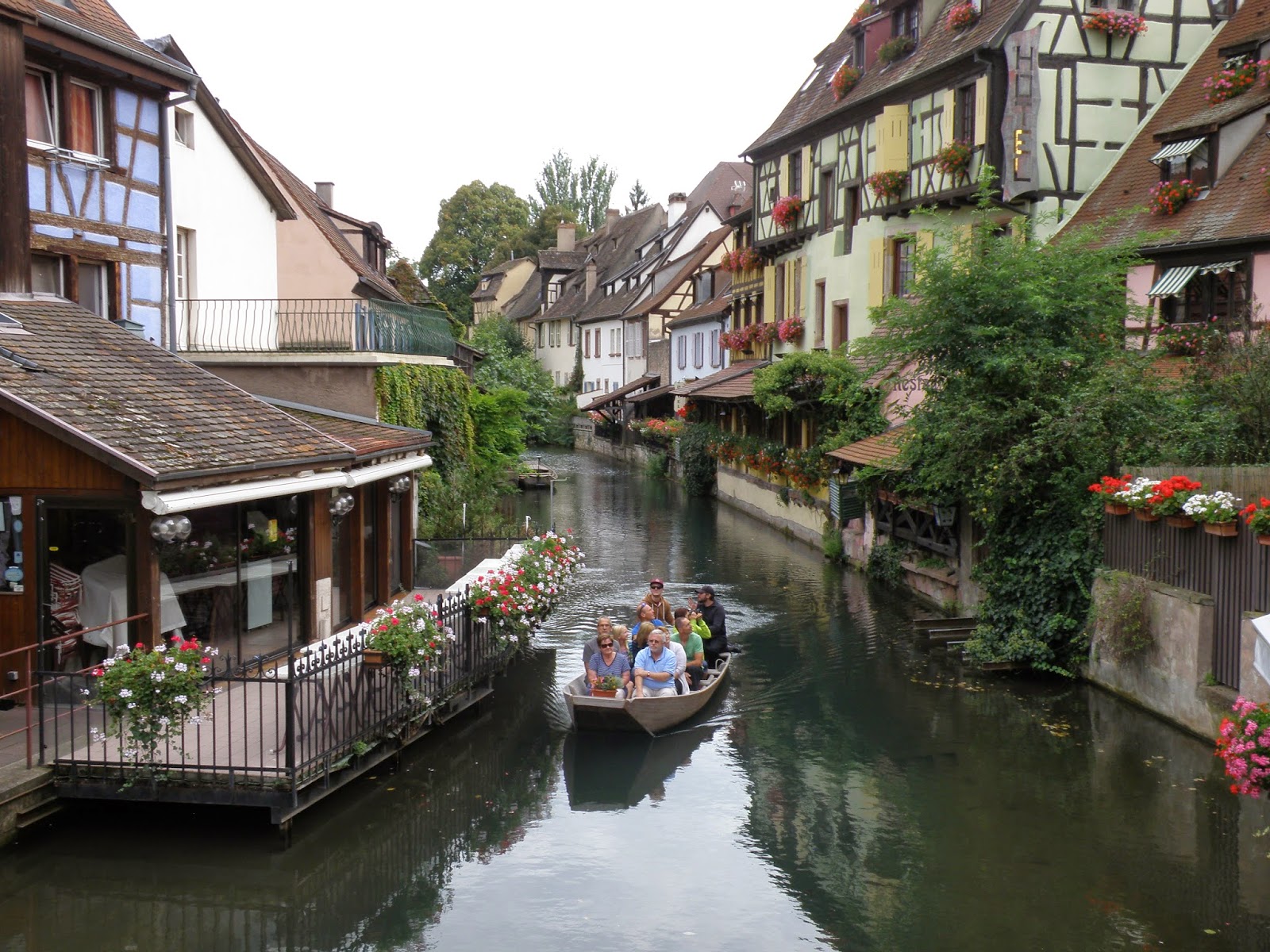 Before stopping at another restaurant and having yet another dessert.  Here’s what we all had— 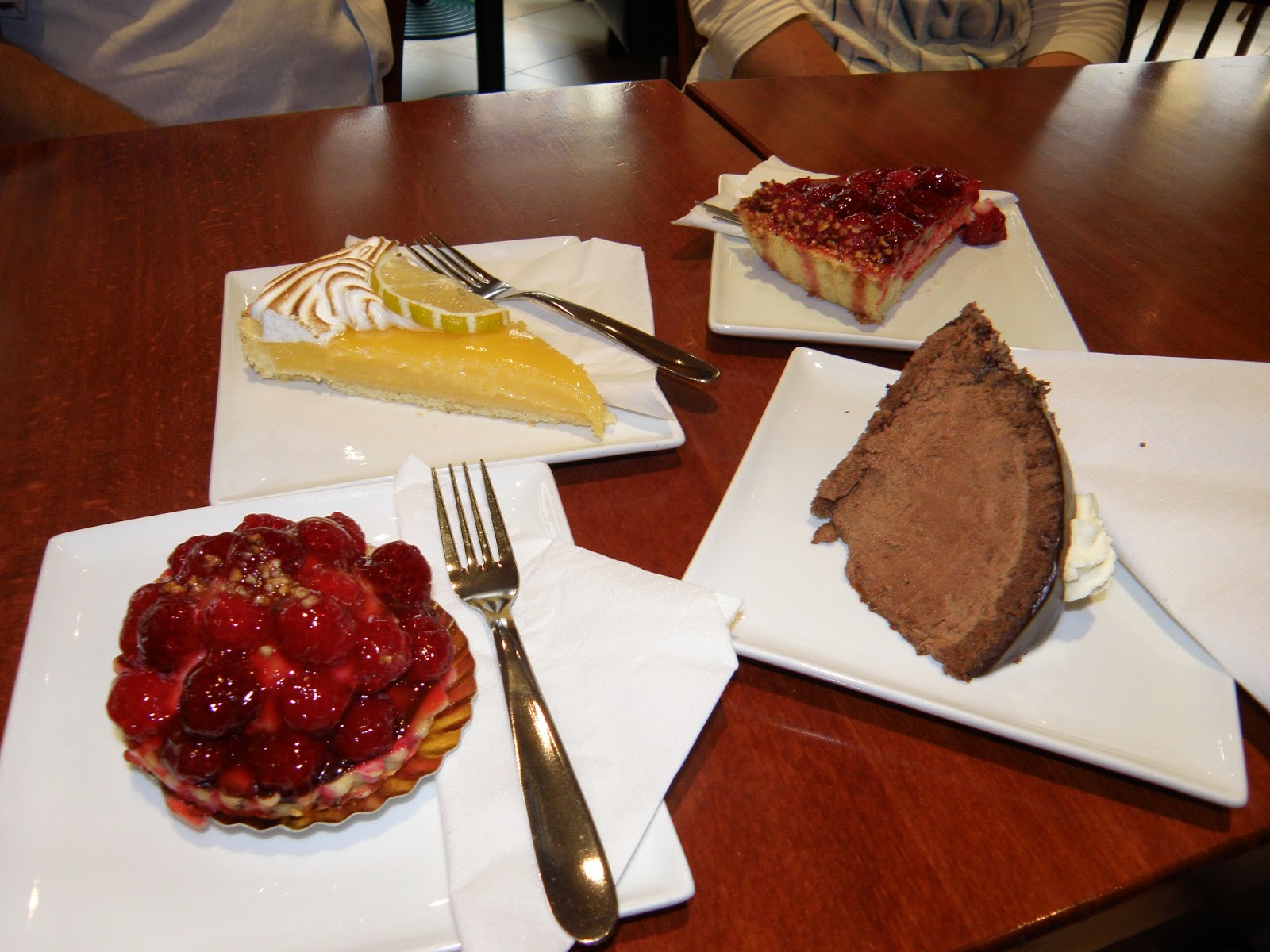 NOW do you see why I probably gained all three pounds in one day?

Anyway, endless thanks need to go out to our hosts, tour guides, and all around fantastic companions for today, Oliver and Marie Rose Pernot of Wittelsheim, Alsace, France— 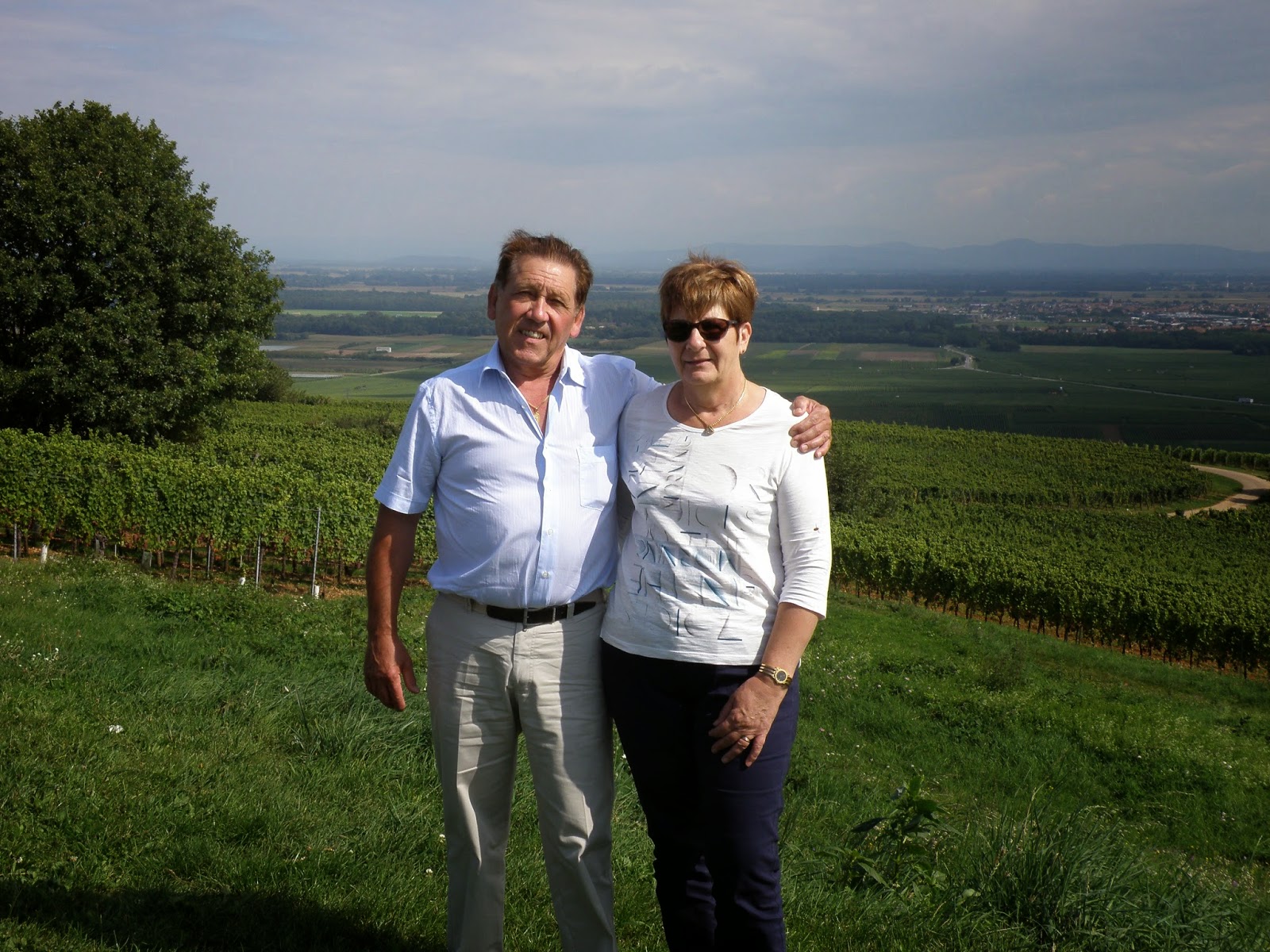 Now, I know this is running kind of long, so I’ll wrap it up soon.   First, your animal picture for today, and since I couldn’t choose between two of them, you get both a live animal— 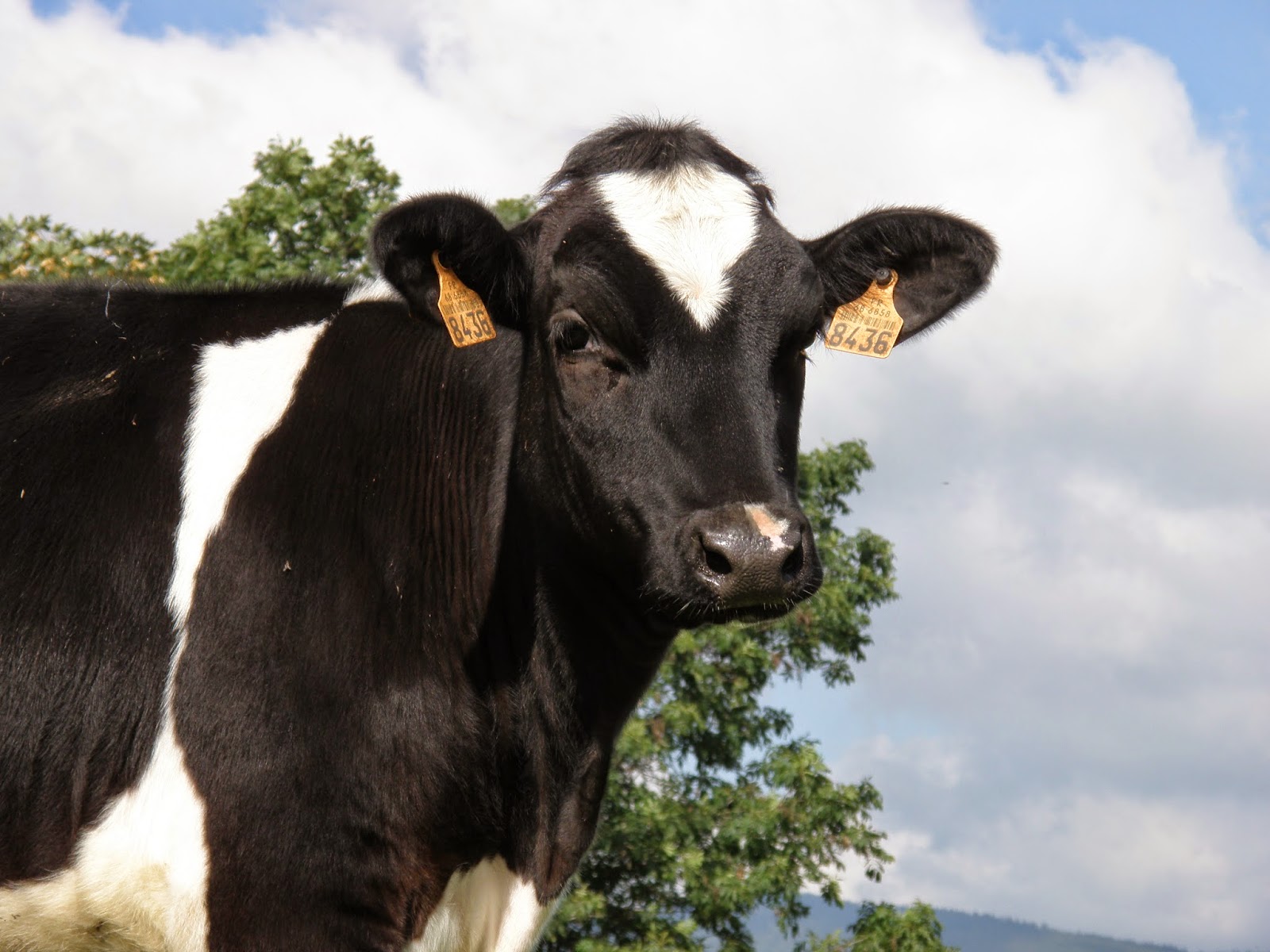 And a stone one— 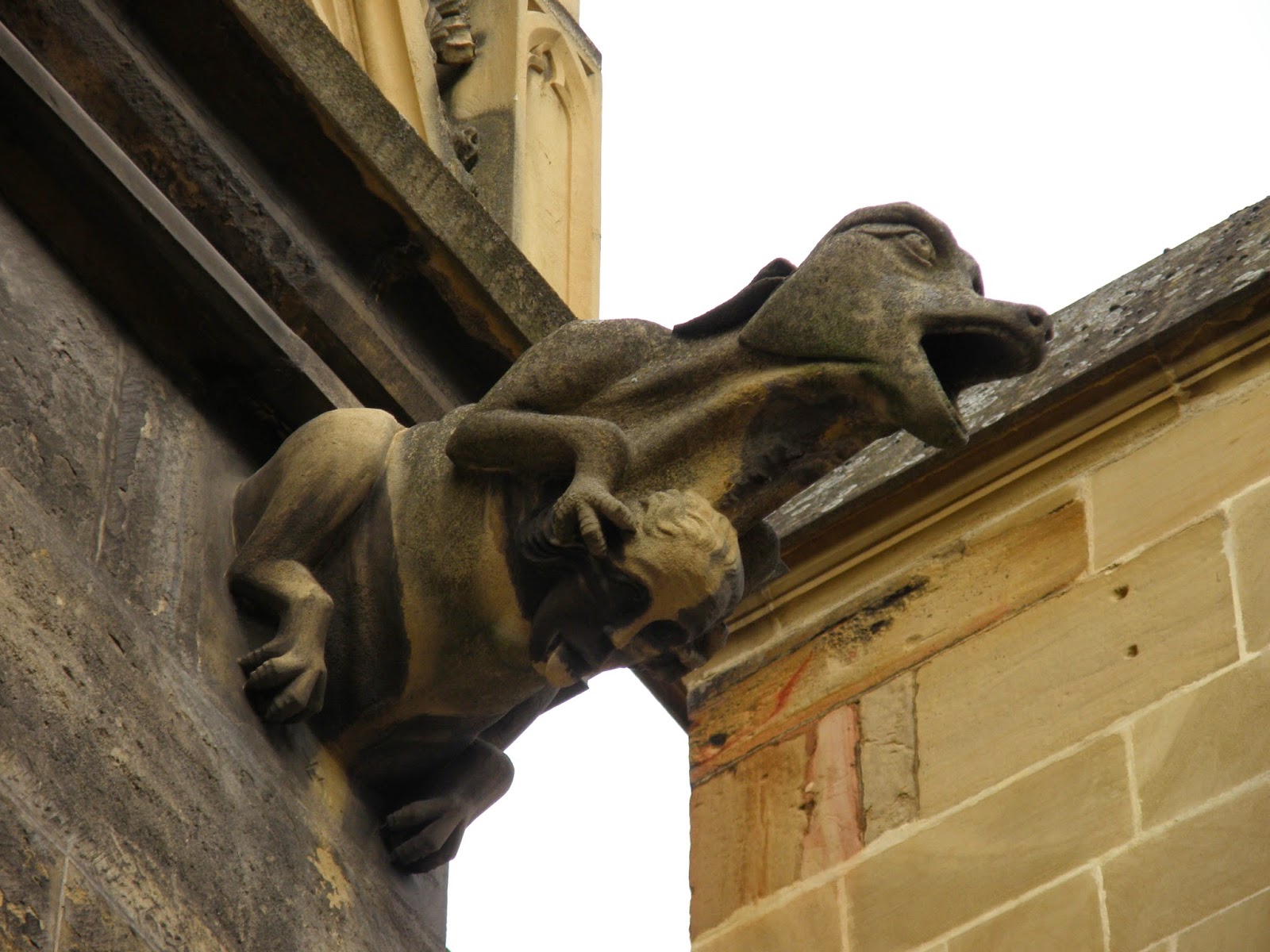 Yes, it was that kind of day, the kind of day where you saw both cows and gargoyles within several hours of each other.  And if that wasn’t weird enough, how about a guy sticking his head out of a window? 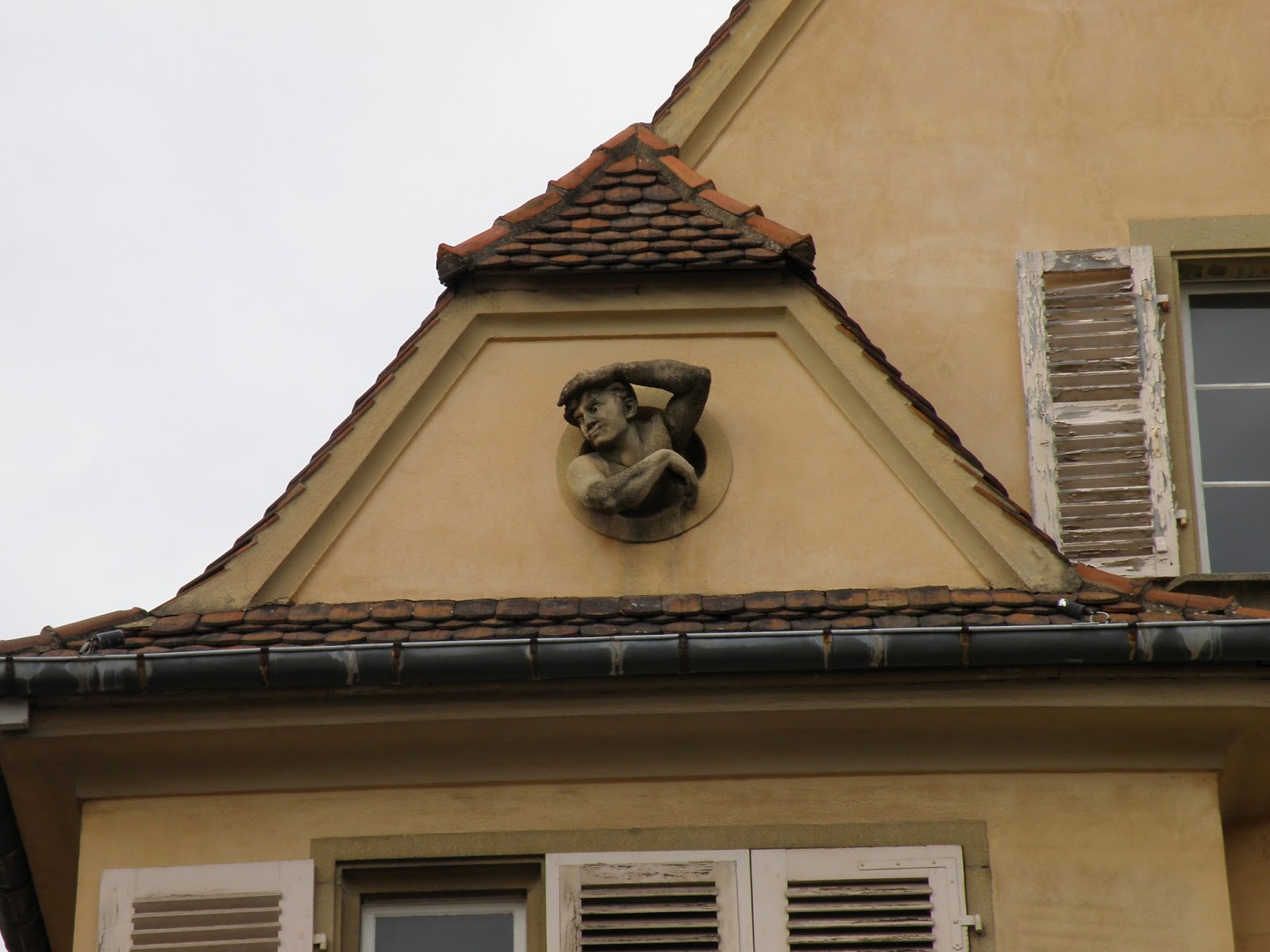 Just goes to show that you never know what you may see during a day on the road.  And with that, I’m off to find some Rolaids, because I have the feeling I may need them soon.  So with this view from the window of our camper van/hotel room... 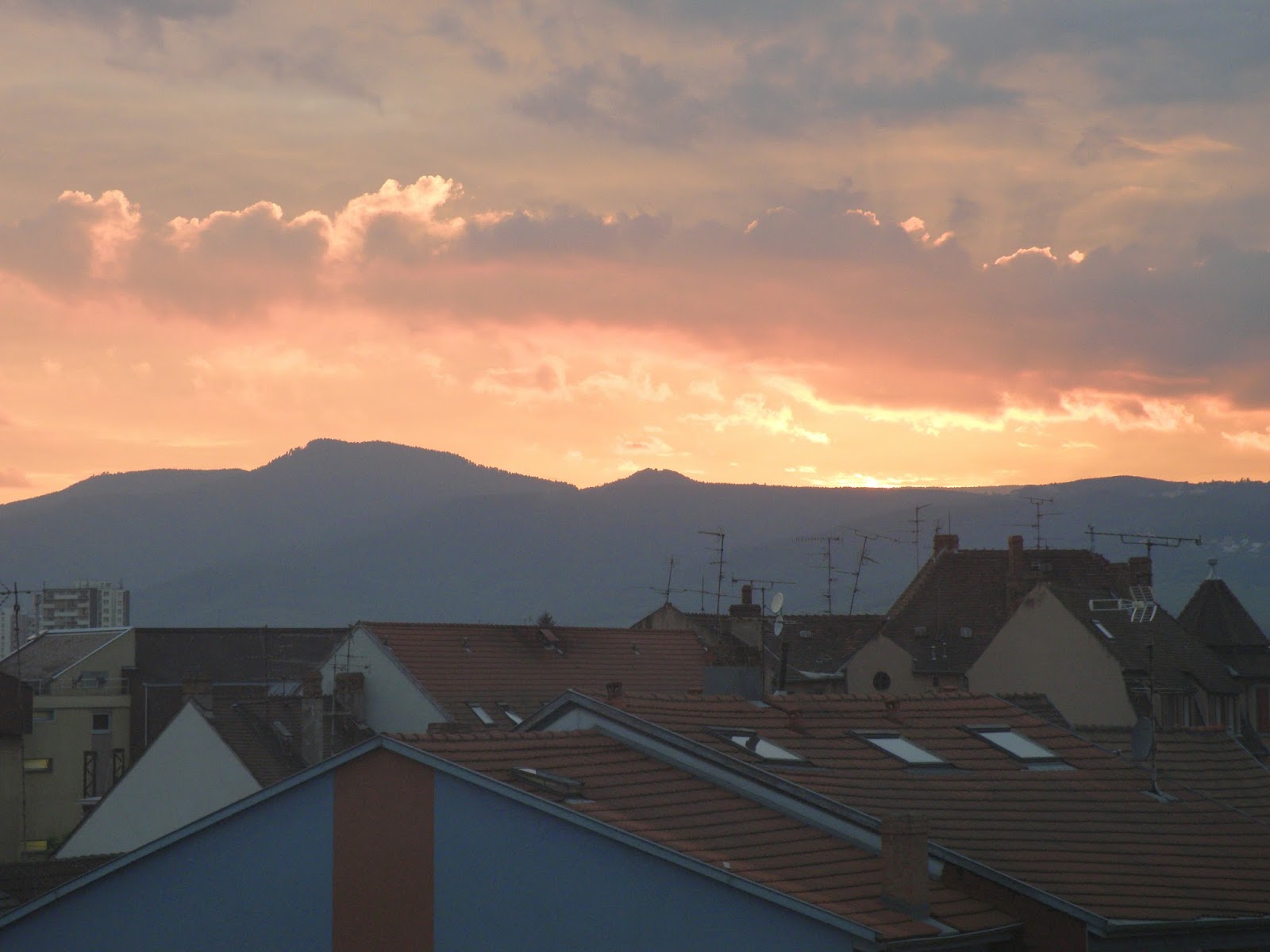