Loraine just sat down and poured herself a good stiff drink.

There’s more to the story (a lot more), but it was that kind of day here in the Alsace region of France.  We had two major goals for today, and we did accomplish them both, but in between we saw so many signs like this— 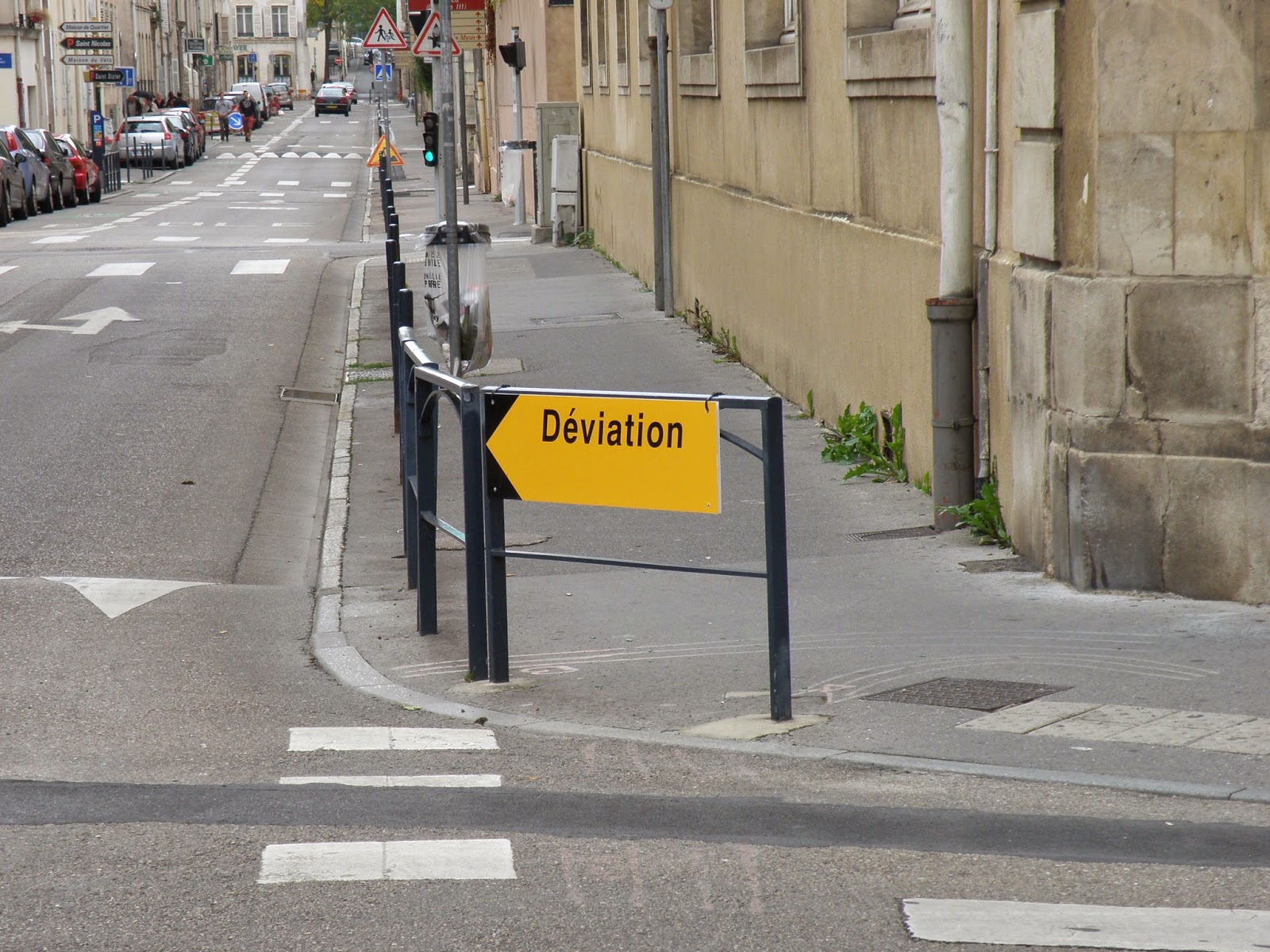 And we were stuck in so many road construction zones and traffic tie-ups that we guess we lost somewhere in the vicinity of two hours today, and had to bypass a few places we wanted to visit.  I really love driving in Normandy, with nice roads and little villages to putter through.  But here, with all the tie ups and detours?  Not so much.

But that’s life on the road, I guess.
Our first stop, and the first time we ran into construction and detours, was Freiberg, Germany, where we had one goal and one goal only—to buy chocolate AND cereal.  And we did...we walked out of Rewe and Muller stores with loaded bags and big grins.  We then decided to look around the place, which was a good thing, because they were having a market in front of one very impressive sandstone church! 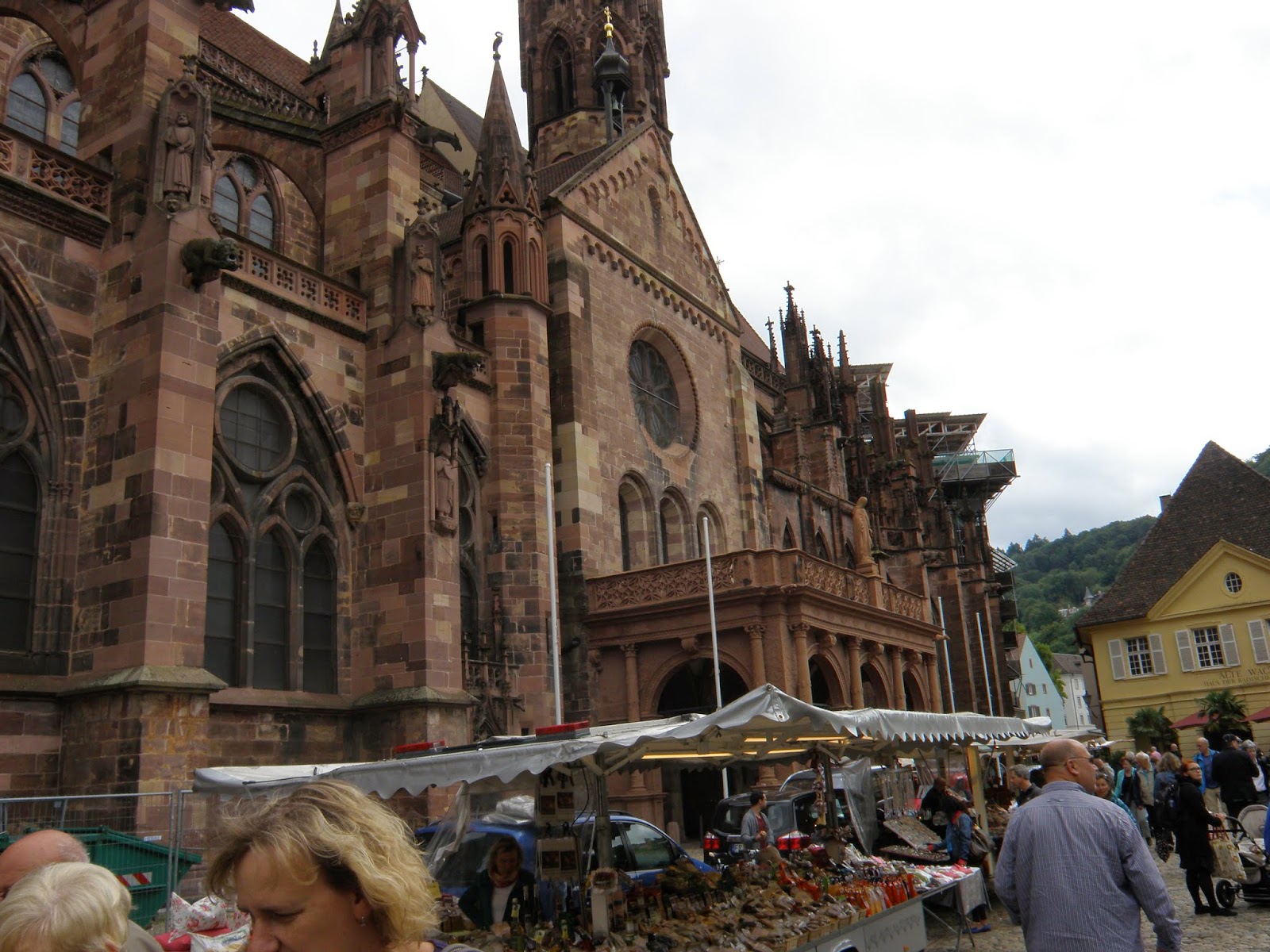 Loraine, being a good German girl, bought herself a bratwurst.  Well, technically, I bought the bratwurst for her, and here’s the photographic proof! 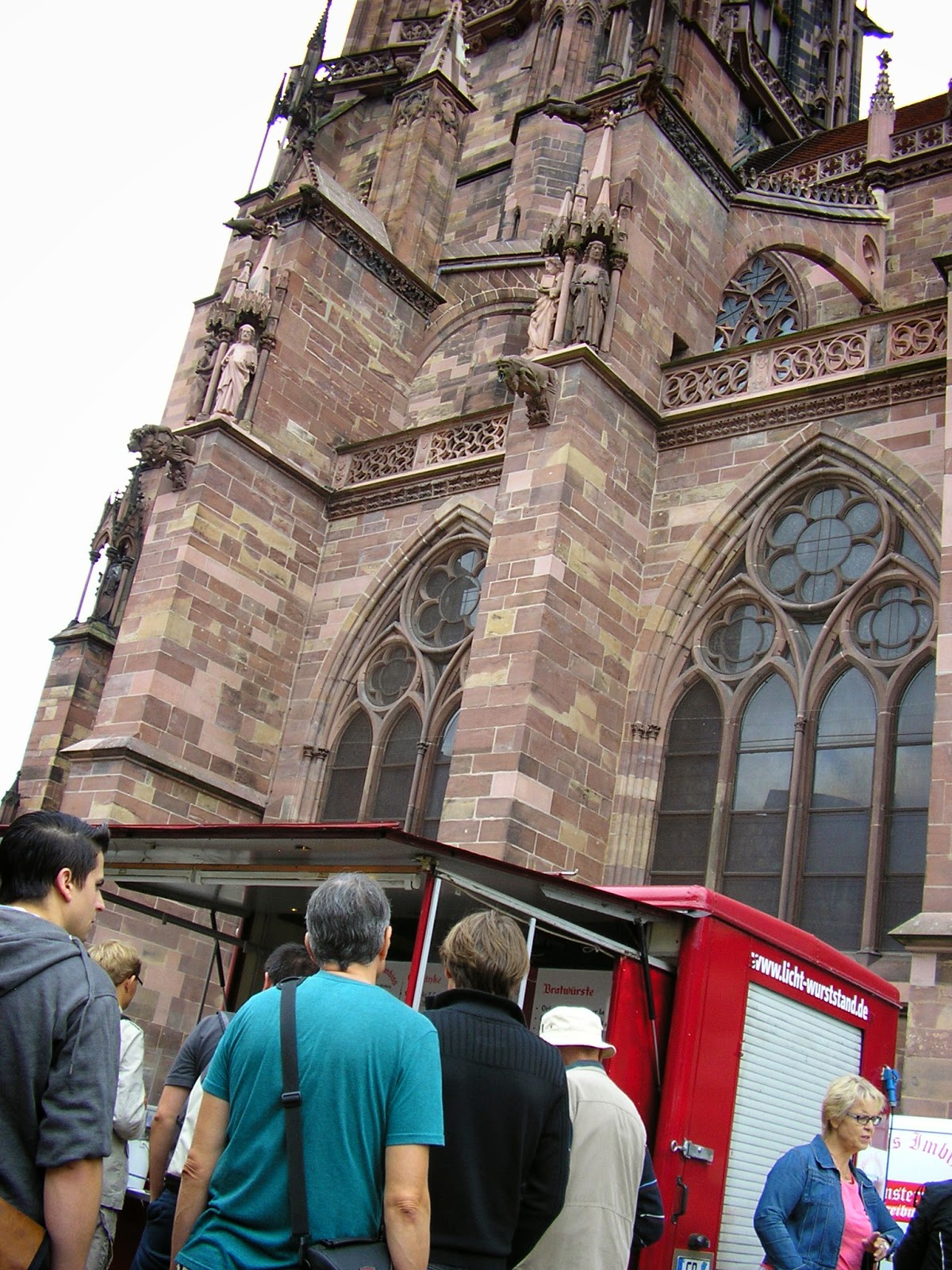 I have a weird shaped head, don’t I?  Anyway, the beef bratwurst, bought from a vendor who spoke English, was actually seasoned with curry.  I only had one bite, and the flavor lingered for the next hour.  I think Loraine was quite happy with her purchase.  Oh, and so our friends Oliver and Marie Rose aren’t disappointed, you’ll be happy to know that I have started to eat again after yesterday’s calorie debacle.  In fact, here’s what we had for lunch! 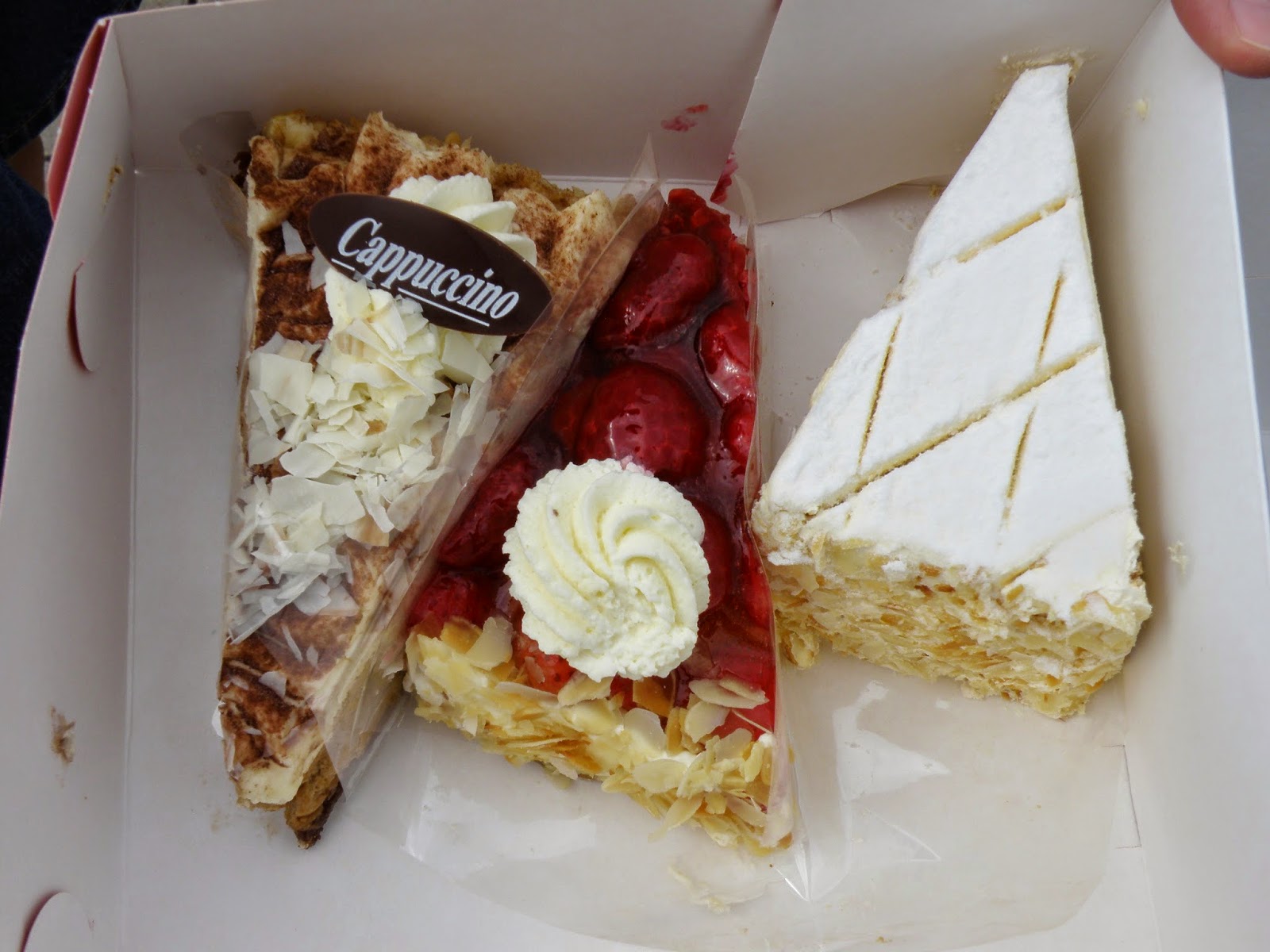 Believe it or not, our “lunch” cost just over 5 Euro...less than eight bucks.  It was worth every penny.
With our car weighed down with chocolate, boxes of cereal, and baked goods, we left Germany and headed back to France, eventually ending up in the very pretty little tourist town of Bergheim.  We drove through here on our way to Colmar Monday, where it was packed to the gills with tourists.  When we came back today?  Dead. 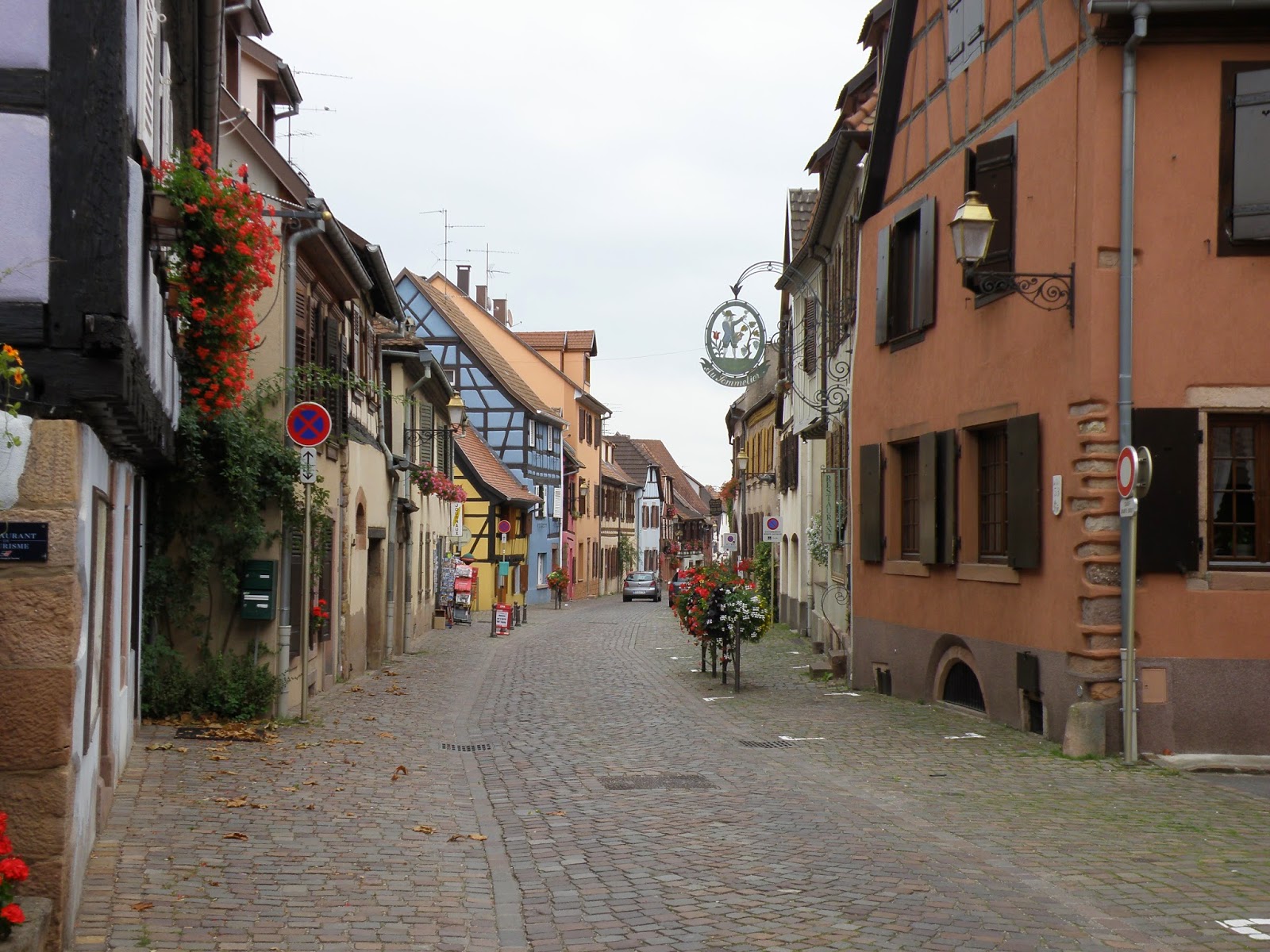 We don’t know if it was just because it’s Wednesday or because it was overcast, cool & windy today (the forecast, by the way, called for sun & 75) but we pretty much had the place to ourselves.  It’s a really nice place, too, with a big sandstone church built in the 1300s, and a park that’s called “The Garden of Music”.  Think you can figure out why? 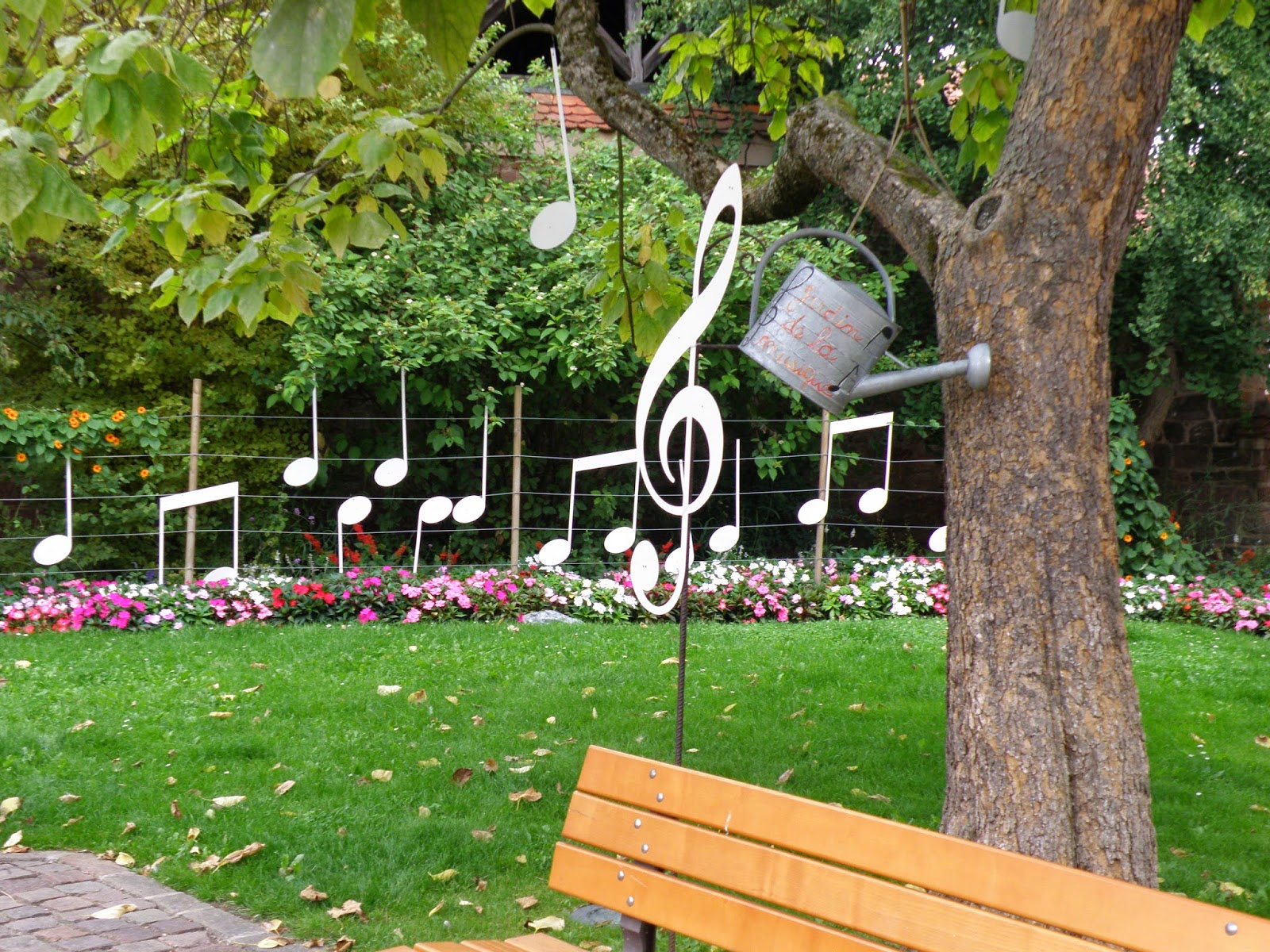 Bergheim also provides our animal picture for the day— 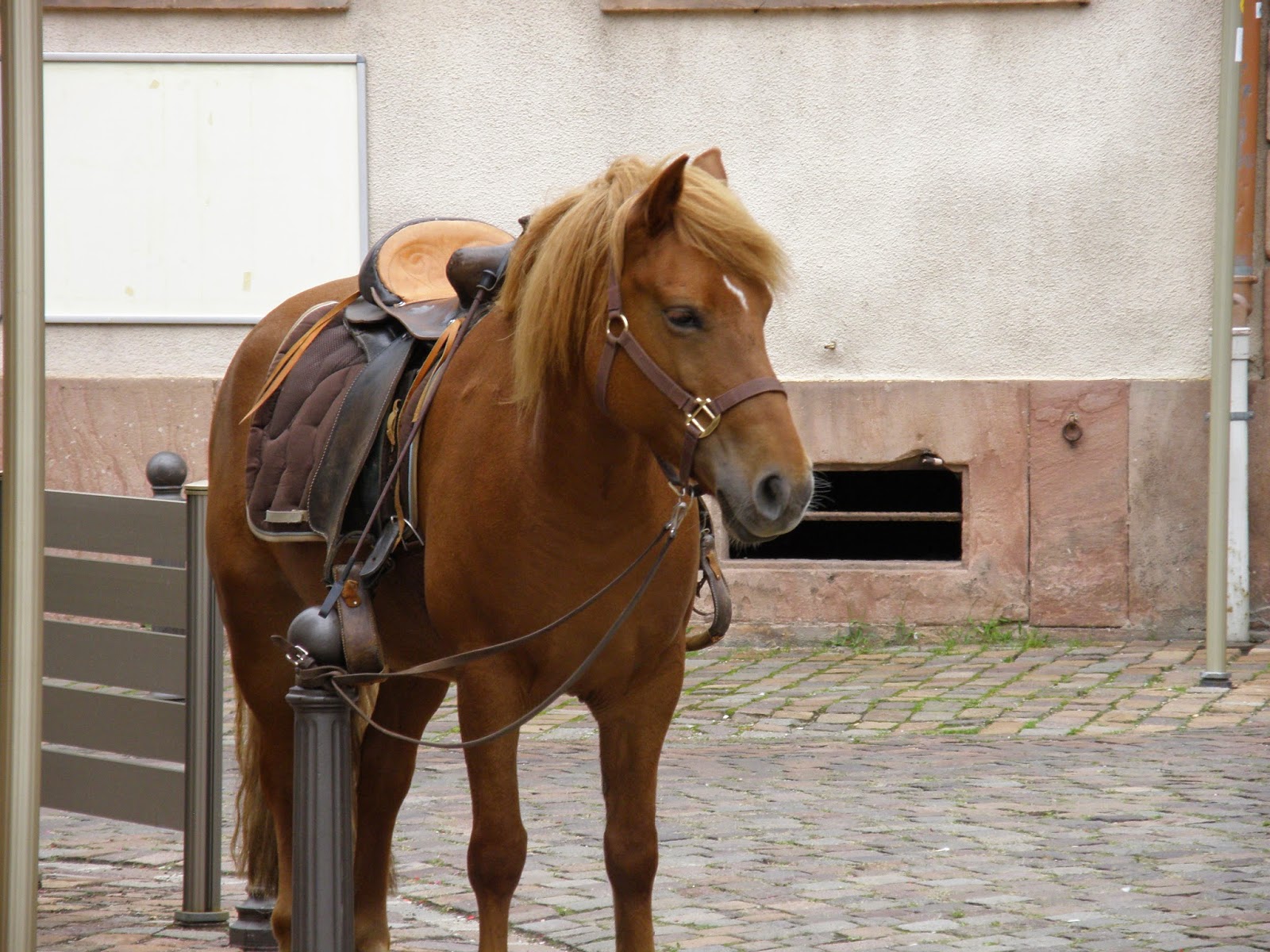 We have no idea why this horse was tied up on a street corner.  What we do know is that every time the horse would whinny (and it whinnied quite often) a nearby rooster would answer with a crow.  It got to be quite the symphony after a while, seeing as how this went on for five or ten minutes until we left.
Once again, I guess it’s just part of life on the road.
That reminds me—Loraine poured herself her good stiff drink for a reason other than the fact she was driven crazy by the final road interruption of our day.  She actually brought a couple of airline-sized bottles of rum with her because she wanted to re-create the favorite drink of her college days, a rum & Coke.  And since Coke in the U.S. has been sweetened with high fructose corn syrup for years now, and as a result doesn’t taste like it used to, she wanted to get some French Coke—sweetened with real sugar and tasting the way it used to taste—and have her rum & Coke taste the way it used to.
It worked, because she gave it a big thumbs-up.
Finally, let me introduce you to two characters we met today, the first being the lobby guy at our camper van/hotel— 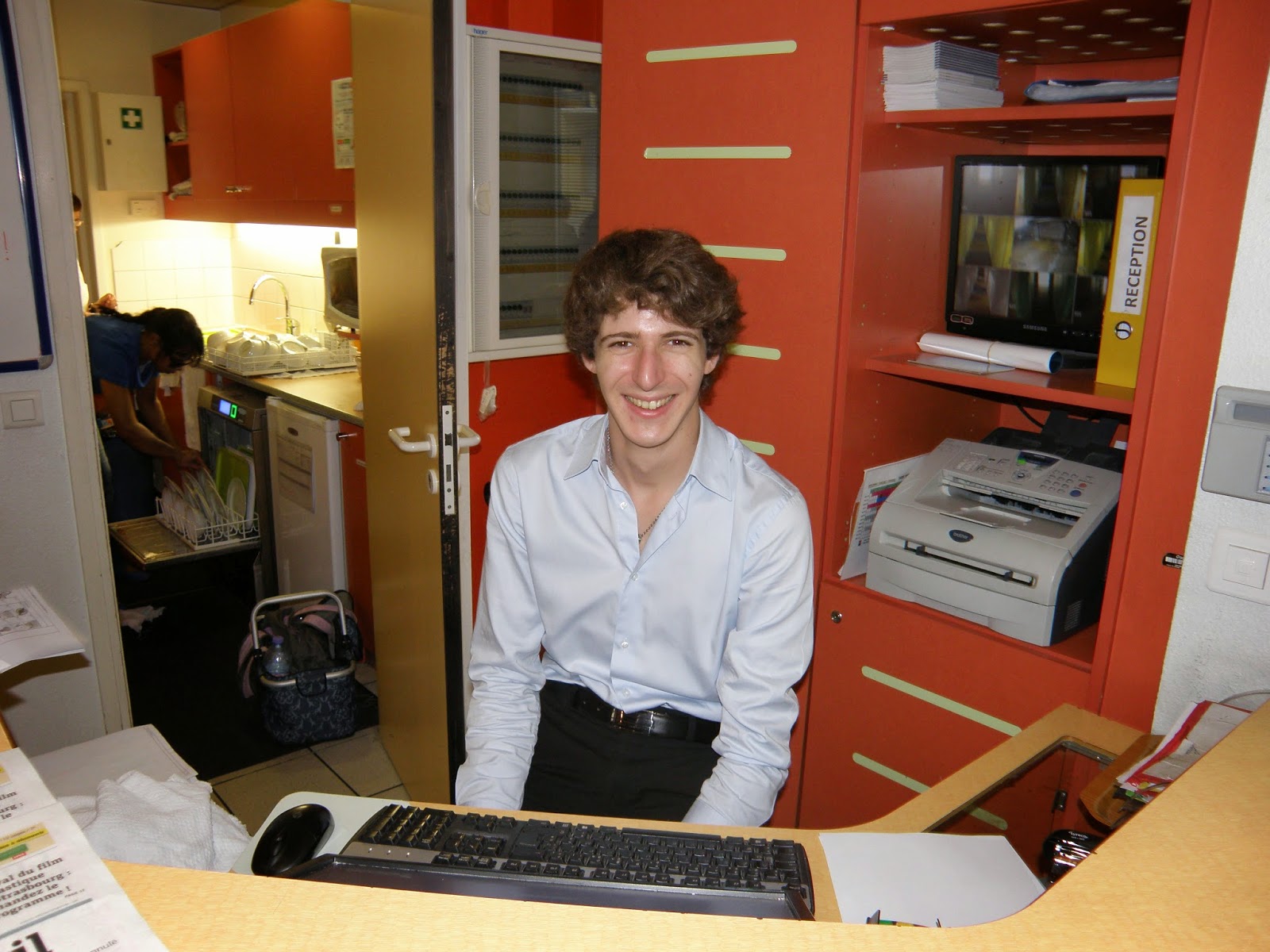 We heard him speak and be comical in four different languages while we were eating breakfast, and congratulated him on his skills.  In response, he called himself a “French Superman”.
And who says all French people are quiet & reserved??
Secondly, meet Mr. Accordion Player— 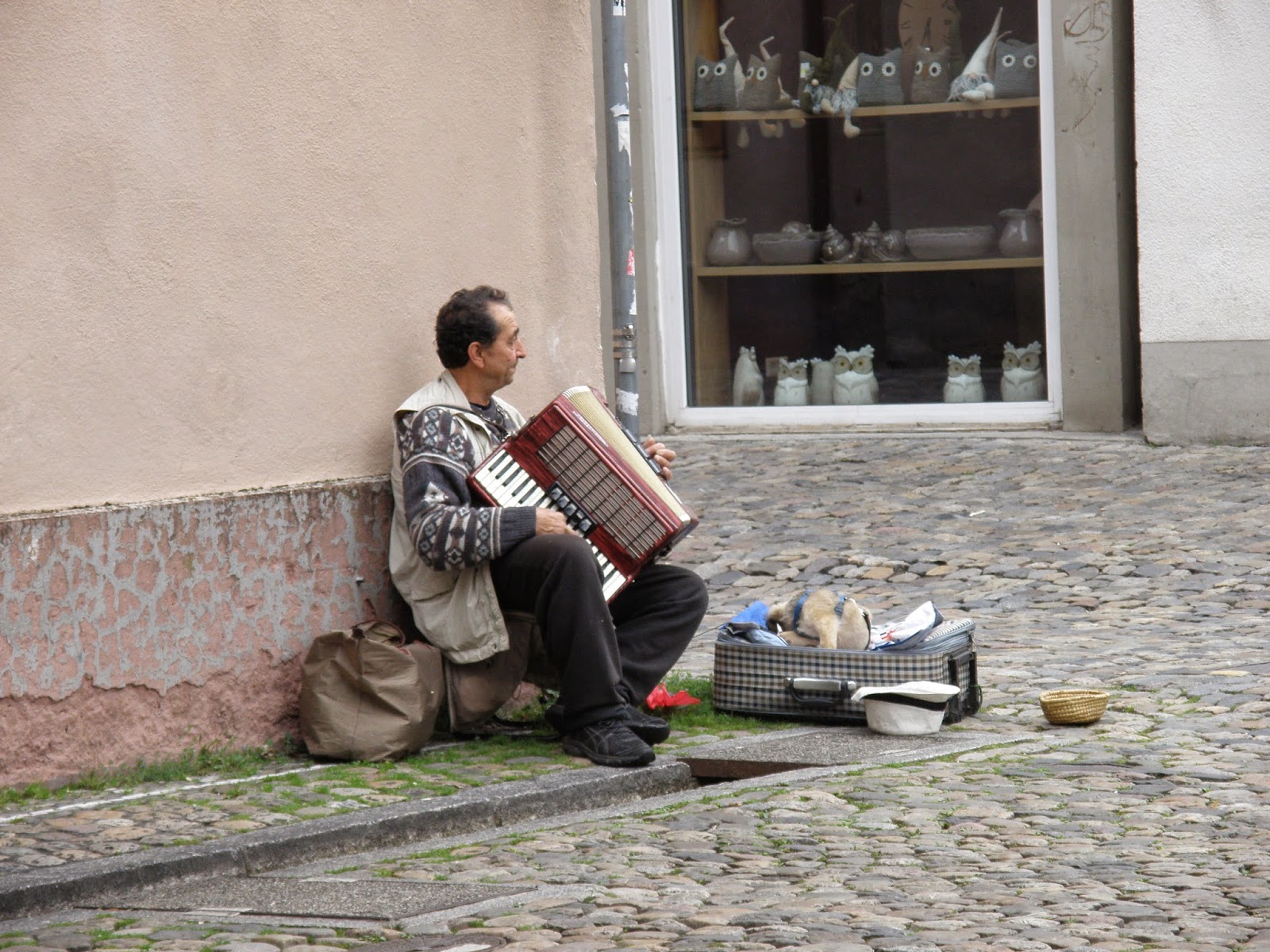 He was just sitting outside of the market in Freiberg, plying his trade.  And believe it or not, he wasn’t the only accordion player around the church.  That must be the big thing on their market day.  In fact, it was almost as strange as the guy we saw in Colmar yesterday, standing outside of a restaurant with a guitar singing enthusiastically (if not very well) the song “Guantanamera”.
Think maybe they should team up for a duet?
Tomorrow, we leave Colmar and start to slowly make our way west toward our final destination of the Paris area with a stop in Epinal to meet someone before we eventually wind up in Troyes (pronounced TWAH for those keeping score at home).
That, of course, is assuming we don’t run into any more road construction and can’t get to Troyes.  These days, you never know!
(jim@wmqt.com)

(p.s.--Loraine had mentioned to some friends that we were gonna try & visit the Audie Murphy memorial in Holtzwihr today, and we did!) 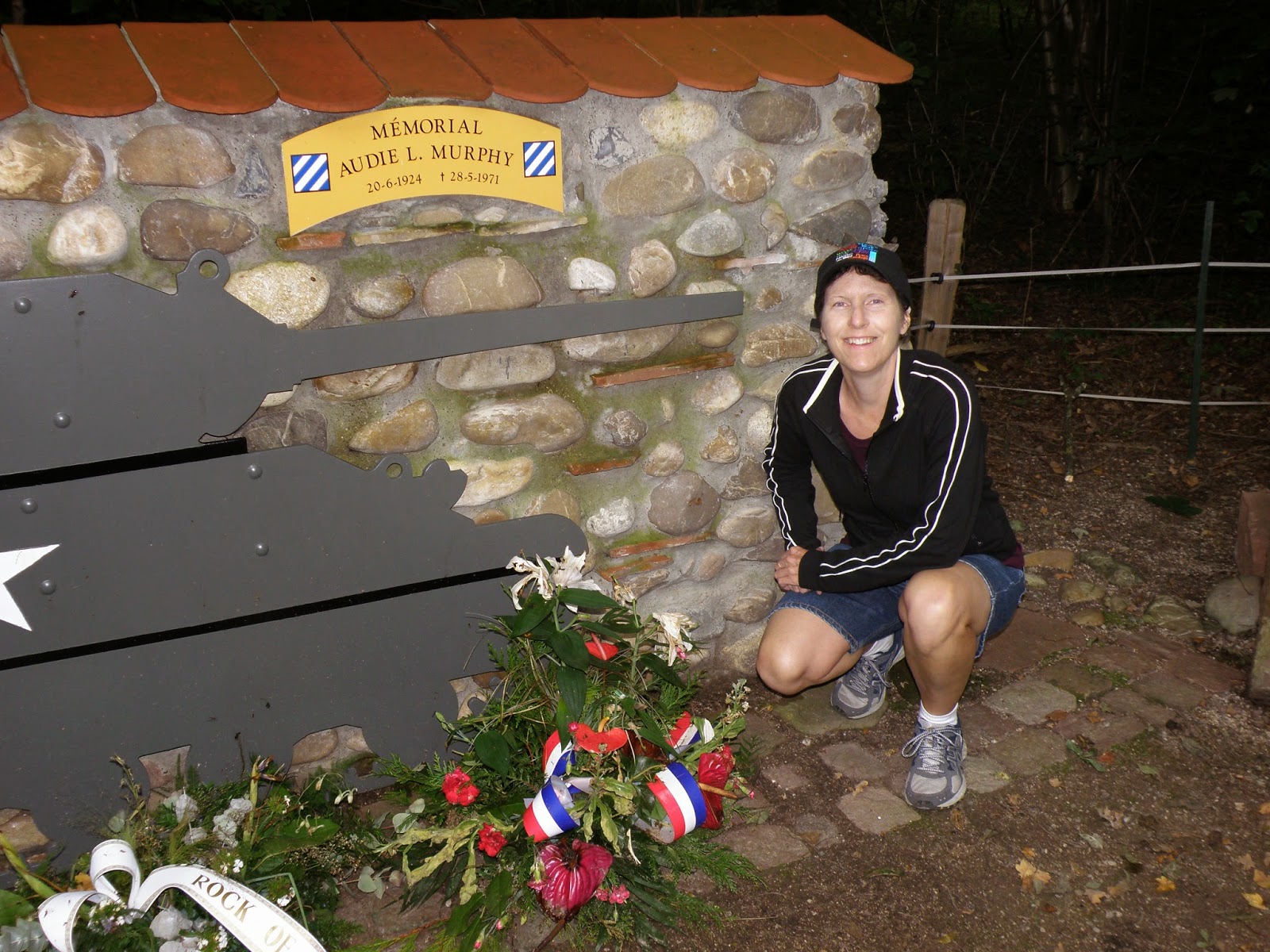