I think it’s safe to say you’ve had a good day when this is the view you get while eating dinner on your hotel balcony. 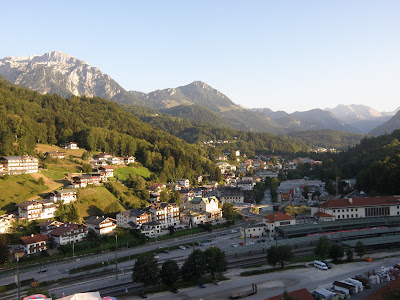 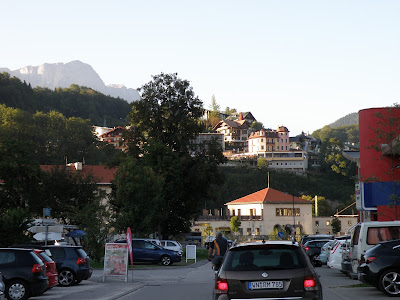 In case you’re curious, our hotel room is dead center in the picture, partially obscured by the tree, here in beautiful downtown Berchtesgaden, Germany, a stone’s throw (literally) from the German Alps.  It’s the final stop in this little adventure (well, only if you don’t count the night we spend near the Munich Airport waiting to fly out) and since we’ve been here twice before and know what it’s like, we decided to save the best for last.

Like I said, we’ve been here twice before, but we obviously didn’t wander around enough because as we were rambling around after arriving today we stumbled upon a beautiful public garden— 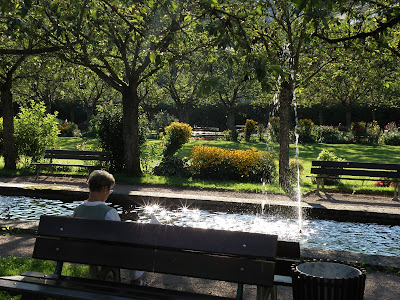 I mean, it’s not like the public garden isn’t right next to both the town market area and the town cemetery, both places we frequent when we’re here.  I guess in the hustle and bustle of the previous visits we never just had the time to look at an entrance way and wonder what was behind it.

I’m glad that this time we had the time!

Our day started with one last research project for Loraine.  This one involved the last young man from the city of Marquette killed in Europe in WWII, PFC George Kamecki—

George was killed when his unit was trying to cross the Danube near Regensburg, and although she didn’t know exactly where he died, she wanted to stop on the river and pay him a little tribute— 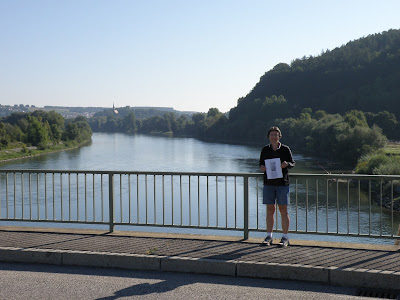 George died on April 26th, 1945, just over a week before the war ended.  He wasn’t the only loss suffered by the family during the war, either.  His brother Aloysius was killed right at the beginning of the war when the merchant ship on which he was a Naval guard was torpedoed near Greenland.  Can you imagine—losing a son right at the start of the war and then losing another right at the end?

My mind just shudders at the thought.

We made one big stop on our trip today, and that was at the biggest lake in Germany, Lake Chiemsee.  It’s a lake that has a 40-kilometer bike path around it, and beaches and marinas almost every mile or so.  So you can guess that it would be quite popular even if you couldn’t see the Alps in the background— 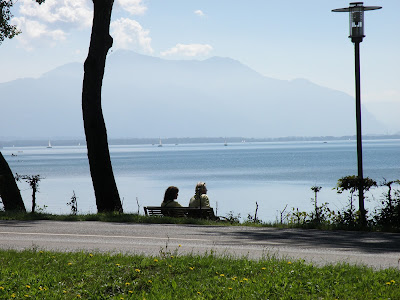 Admittedly, it’s not the best picture to prove my point, as the mountains were still covered in haze when I took the picture.  But you get the idea, I hope.  It’s a beautiful place.  Even the weird ducks seem to think so— 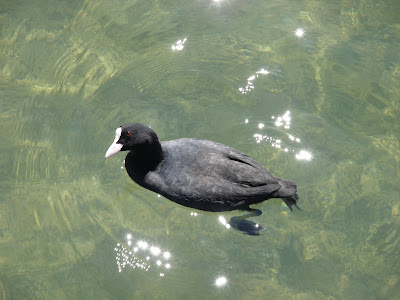 By the way, when driving down, Tony the Tour Guide hit a switch he shouldn’t have and soon announced to no one in particular, and I quote, “My butt is on fire”.  Apparently he accidentally started up the seat warmer (on an 85 degree day) and couldn’t figure out how to turn it off.

Those Czech cars...they’ll get you ever time, I guess!

If you’ve been listening on the air, I know you haven’t heard many reports from me, some of which were the fault of an e-mail server being down in the U.S. and some because I couldn’t get wi-fi on my phone (where I record them).  But one of the ones that did get through mentioned about how it’s election season here in Germany, and when it’s election season in Germany you can only advertise for a month before the vote and you can NOT run negative ads against an individual (wouldn’t THAT be nice?).  In fact, you can only (mostly) put up little signs with your picture, your party, and a saying.  And because the ads have to be so simple, you have to appeal to your audience, like this guy dressed in lederhosen— 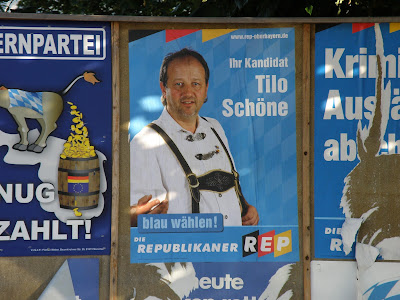 When in Bavaria, do as the Bavarians do, I guess.

Tomorrow we go hiking, hiking on a trail where the higher you go, the more optional clothing becomes.  How far up will we go?  We’ll find out tomorrow!