You know this has been a weird trip for the Koskis when we made a horrid discovery this morning—we haven’t eaten much chocolate.  Or, according to Loraine, we haven’t ENOUGH chocolate.

I know; shocking, isn’t it?  And it’s not like we haven’t purchased a lot of chocolate, because we have. Heck, Saturday we even visited a store to devoted to nothing BUT chocolate.  But things have just been so hectic recently that until our shocking discovery this morning we haven’t gotten around to consuming so much as a piece of the chocolate we bought.

Don’t worry, though.  I think we’ve almost caught up by now.

Our main objective for today was to visit the city of Nordhausen, and I’ll talk about that in a second.  First, though, I have to share another story about the “Cult of Loraine.”  After everything that happened yesterday we figured we’d have a quiet day, but that changed in a heartbeat.  We stopped in a town called Leuna (pronounced LOY-nuh) to get this picture— 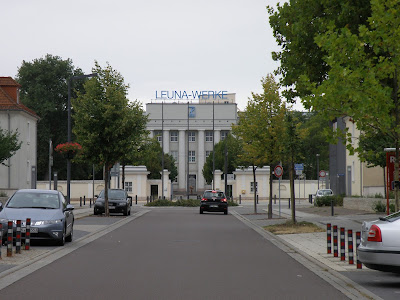 It’s a picture of the chemical factory that was the target of Elwood Norr’s B-17 bomber the day it was shot down.  I took the picture and we were getting ready to leave when Tony the Tour Guide suggested we stop into the town’s Tourist Information Office to see if they had anything we might pick up.  Well, as soon as we walked in and Tony explained why we were there, the people at the T.I. had loaded Loraine down with all kinds of swag, had called the town’s archives to see if they could help us at all, and had called the Public Relations office at the chemical company, who then asked us to come over and take a tour of the place, which we did.  An hour and a half after making a 30-second stop, we left Leuna.

It’s quite the adventure traveling in Europe with Loraine.  It really is!

Anyway, we finally made it to Nordhausen, where we wanted to do a couple of things.  The first was to pass pictures along to the museum there.  My great-uncle (my grandfather’s sister’s husband) had helped liberate the concentration camp there, and took a bunch of pictures while doing so.  We tried to match up the pictures, now— 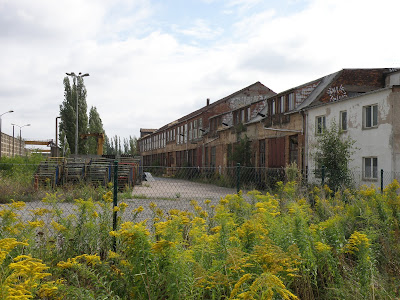 And then (with warnings that this picture is quite graphic)-- 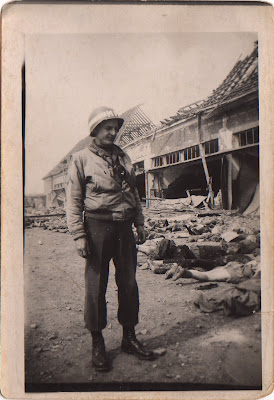 Apparently, Dwight Eisenhower had wanted the concentration camps as well documented as possible, and asked soldiers to take pictures, which my great uncle did.  And now they’re in the capable hands of an archivist in Nordhausen.

Right outside of town is a mountain, a mountain Nazis had tunneled into and had slave laborers building parts for the V-2 rocket.  Long-time readers of my daily blogs know the mixed feelings I have about Werner Von Braun, the architect of the U.S. space program.  I mean, sure, he helped put together humanity’s greatest achievement.  But it was an achievement built on technology he developed in places like Nordhausen.  It just doesn’t seem, well, just, you know?

Anyway, you can take a tour into part of the tunnel complex, where they still have parts of old rockets lying in the darkness, like this nose cone of a V-2— They also have a V-2 engine lying around, and sometimes you can even see a dork posing in front of it— 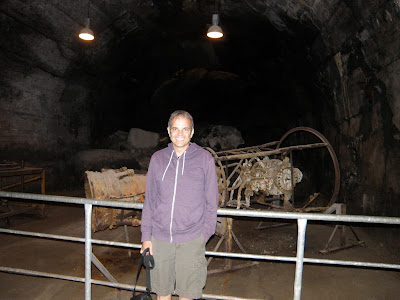 All in all, it was a very cool place, my ambivalent feelings about it notwithstanding.

I think I mentioned yesterday about how fascinated I’ve become with the former East Germany and the transition they’ve had to make from a state-run government to democracy.  Everywhere you look you can see signs of it, from the architecture to the interesting way that many businesses around here use copy-cat techniques to try and lure customers in.  An example? 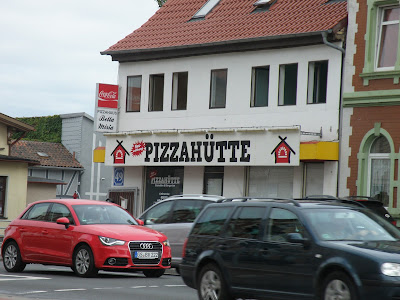 Now, I’m not a copyright lawyer, nor do I play one on TV, but I have the feeling a cease & desist order could be popping up sometime in the near future!

Speaking of pizza, Loraine and I continued a long-standing tradition and went out to an Italian restaurant for dinner, persuading Tony to come along.  The Jim and Loraine tradition began our first trip over, when the only restaurant open in a small town was an Italian place.  Every trip since then, we’ve always managed to get to one Italian restaurant.  And tonight, we did it again.  (I had an amazing basil-butter gnocchi with pine nuts, if anyone’s curious!)

Finally, a couple of things about animals.  I know I haven’t been posting any pictures of flowers this time around, but that’s because in this part of Germany, aside from the occasional field of dying sunflowers, there really don’t seem to be many flowers (another holdover from the pre-Unification days, perhaps?)    So I’ll make up for it with a picture of a German butterfly— 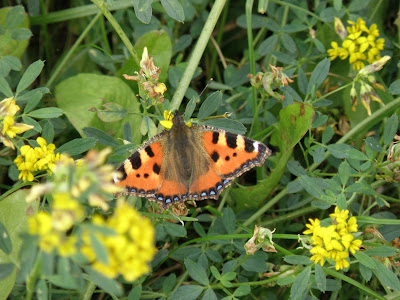 Also, we’ve been staying at a chain called Motel One in both Berlin and Leipzig.  One of the cool things about Motel One is that they have a video loop of a fish bowl playing on their TVs.  We first noticed it two years ago, when Loraine started watching a certain blue fish with a yellow tail.  When we turned the TV on in Berlin, she was a little disappointed that her fish wasn’t there any more.  But guess who showed up in Leipzig? It’s hard to take a picture of a fish swimming on TV, but there’s Loraine’s fish in the lower right hand corner of the screen.  And since today marks our last day in a Motel One for this trip, it’ll be a while before we see Loraine’s fish again.

Yes, you may shed a tear or two if you’d like.  I‘m sure she’ll appreciate it.,

Tomorrow we head south, where the weather the rest of our trip is set to be sunny and in the 80s, unlike the clouds & rain & 60s of the pasty few days.  We can’t wait!  So until then. . .