Variations on a Theme: Peace & Chaos

It wouldn’t be a trip back to Munich from Berchtesgaden without a traffic jam. 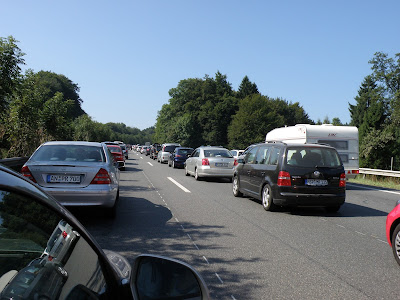 This is the third time we’ve made the trip, and this is the third time we’ve been stuck in a traffic jam on the Munich to Salzburg freeway.  This one was a doozy, though, lasting almost an hour.  Traffic was moving kind of slowly to begin with, and when you add in motorcycle riders zipping in between cars at supersonic speeds and a guy in a maroon Mercedes-Benz passing where he shouldn’t be (in fact, he was even passing the motorcycles that shouldn’t have been passing the cars in the first place), things just got worse, to the point where traffic stopped.  Like I said, it took us an hour to move five kilometers, and when we got to the end of the five kilometers we found out why.

The guy in the maroon Benz had rear-ended a tour bus.  The gods of Karma caught up with him.  It’s only too bad it caused thousands of people to lose an hour of their lives. 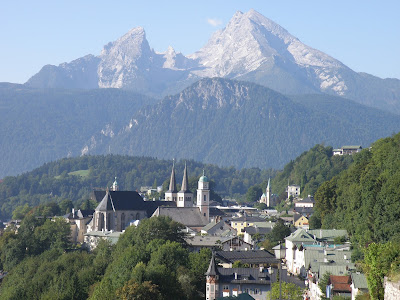 And even sneak a peak at the inside of a church— 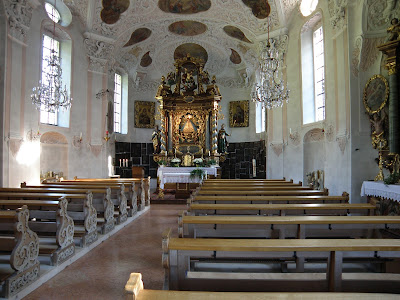 All before we did our good deed for the day.  As we were heading down a hill an older German woman, out for a hike, had hurt her knee, and was asking if we could give her a ride back into town, which we did.  It turns out she’s on a “health vacation”, which is something German workers get every few years.  It’s a week or two of paid time off of work where you go to a spa town and simply rejuvenate, by sleeping, by soaking in mineral waters, or by playing outside, like this lady was.  It sounds like a great concept, and it’s something that’s apparently allowed German workers to be among the healthiest and most productive on the planet.  Hopefully, though, our new friend won’t need a “health vacation” from her “health vacation”!

After our traffic jam we arrived and Munich and did a typically Munich thing—we had lunch at a Bier Garten! 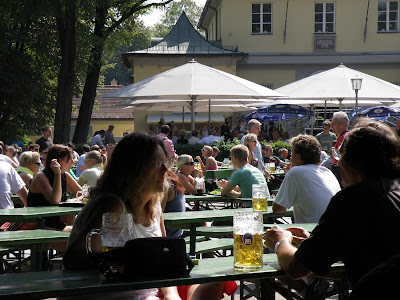 Yes, I know that last night I said I was never going to eat again.  I changed my mind.

The Bier Garten was at the end of Munich’s English Gardens, which is their version of Central Park,  It’s a beautiful place— 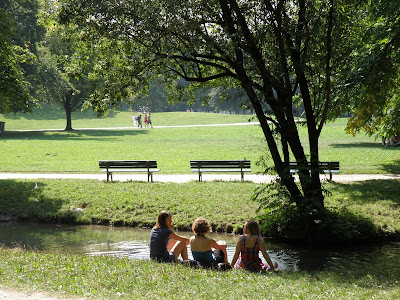 Filled with families walking on the paths, bikers and runners riding (and running) everywhere, at least one wedding party having their pictures snapped, and an old guy playing the theme from “The Godfather” over and over again on the accordion.  It also has the Isar River running through it— 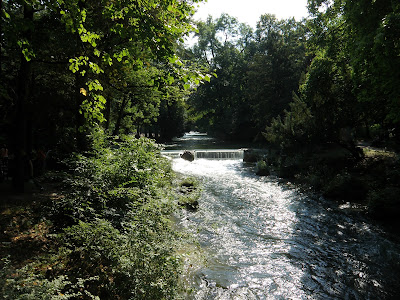 And at one end of the river, near a bridge that causes a series of rapids, you have wake boarders! 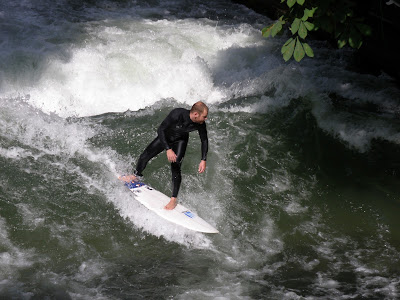 There’s a crowd of around 100 people watching them, and some of the boarders are quite talented.  Now aside from all that, you can also catch a glimpse of ducks & geese in the park— 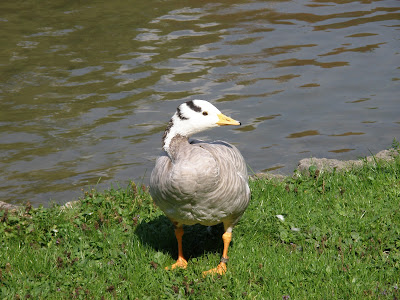 And even Santa Claus on a summer vacation--- 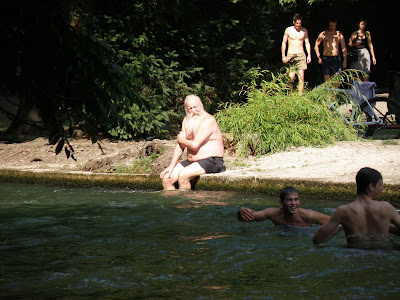 Okay, I’m not technically sure that that’s the REAL Santa Claus, but it’s close enough for me.

Sadly, this is our last night here.  We have to get up tomorrow morning at 4:15 local time (which is 10:15pm Saturday night in Marquette) to catch our three flights, which end in Marquette at 9:30 Sunday night.  That should be a blast, right?  But at least it’ll give me a chance to write another one or two of these to post tomorrow.  I have a notebook filled with things I didn’t get to write about and pictures I still wanna share, so that should kill one or two of those 23 and a half hours, right?

Before I finish for the night, I do wanna thank the two people who made this adventure possible.  One would be Tony the Tour Guide, who keeps insisting that we can travel through Germany ourselves, which might be true, but it sure wouldn’t be as much fun.  Besides, who would translate for us at a news conference?  And speaking of which, I definitely have to thank the woman who made this all possible, the superstar of Weissenfels, my dear wife Loraine.  Every time she puts one of these adventures together she keeps topping herself and leaving me sitting in a hotel room typing in slack-jawed amazement.

Well, I have to (sadly) go put my Euros away and figure out where I stuck my dollars, so until either London tomorrow morning or Chicago tomorrow afternoon...