The Danube Decides (or Dirndls & Flip-Flops)

For the record, I did not photo-bomb Loraine’s newspaper picture.


Just after I stuck up yesterday’s entry we received word that Loraine had made the front page of the Weissenfels newspaper for her little meeting with the mayor (if you’d like to read it (in German), click here).  I stuck the link on Facebook, and when I woke up this morning to check out the responses, several of my “friends” jokingly wondered why my ugly mug was stuck in the picture.  Why was I photo-bombing my dear wife?

I wasn’t.  For some bizarre reason, they actually asked me to stand up there with them, despite the fact that I had nothing to do with Loraine’s book or her presentation of it to Mayor Risch.  Maybe they figured they needed a dork to balance the gravitas of the other two people.  That’s about the only reason I can think of. 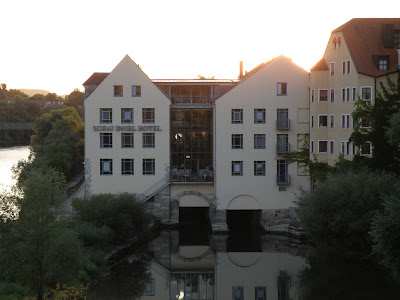 And if you’ve ever wondered (with apologies to Richard Strauss) if the Danube is indeed blue, well... 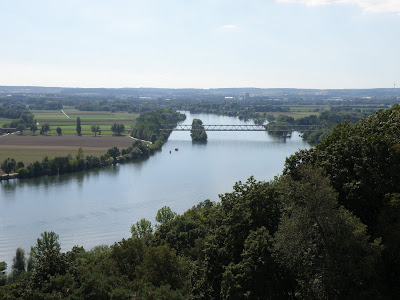 Now you have your answer.  By the way, that picture was taken from our one big stop of the day before we arrived in Regensburg, a place called (and I’m not kidding) Walhalla, a monument that sits high above the Danube and looks a little like this— 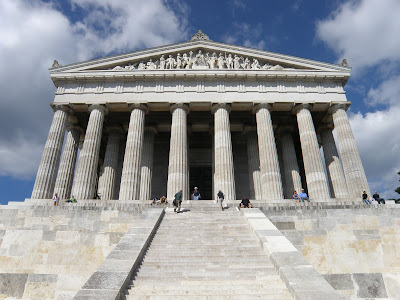 Yes, it’s a honking big place with 100 or so steps just to get up to it and a massive hall inside filled with the busts of every famous German (non-mass murderer & dictator division) who ever lived, including our old friend Sophie Scholl— 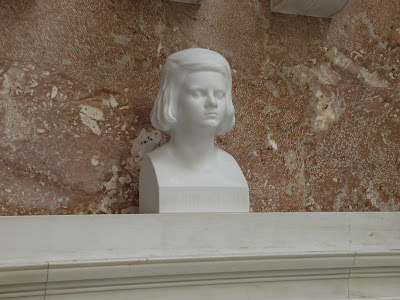 Sophie’s bust had more visitors than anyone else, and that runs the gamut from Richard Wagner to Albert Einstein!

Once we got into Regensburg we high-tailed it over to the “Old City”, but I have to admit we were a little disappointed.  It was kind of a tourist trap.  Sure, it’s a nice old German tourist trap, but a tourist trap nonetheless, with souvenir stores, throngs of loud, smoking people, and, admittedly, one big church— 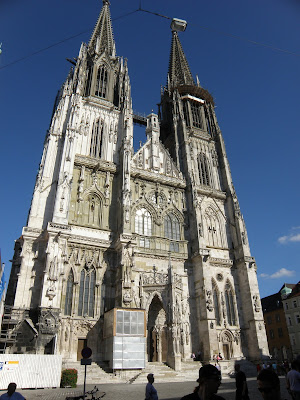 It’s funny, though, because if you cross the Danube back to our hotel, you see another side of Regensburg, a quiet, gentle, non-tourist trap, where you can walk along a canal bike path, sit & eat dinner on a bench, say “Guten Tag” to the people running by you, and just stare at the calmness and beauty that everyday Regensburgers see— 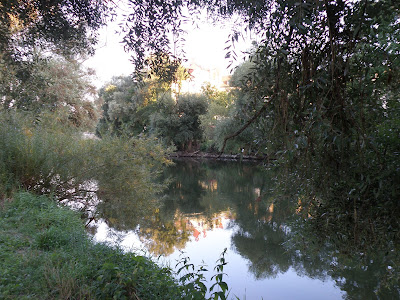 Heck, there’s even an “other side” equivalent to the Old City--- 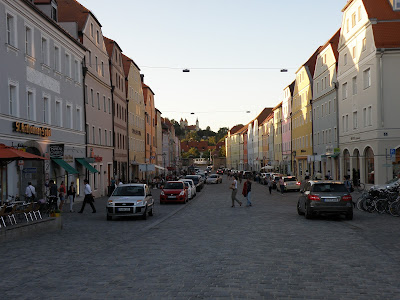 There’s also a carnival a couple of blocks away, with a Ferris wheel, all kinds of strange food, and people dressed in Dirndls and lederhosen.  And if you’ve never seen a young woman walk past you wearing a dirndl and flip-flops, well, you just haven’t lived.  It’s amazing what you can find if you just head a few meters off the beaten tourist track.  Consider that your travel lesson for the day!

Two more quick things.  First of all, we’re holding Tony the Tour Guide’s chocolate hostage.  Well, not “hostage”, really, as he asked us to hold on to it for him tonight, because he feels he may eat it all if it’s in his hotel room with him.  And seeing as how we may have perhaps influenced him (in the tiniest, most subtle way possible) to actually buy the chocolate, I guess we feel a little guilty.  And that’s why we’re holding it for him.

Finally, we wrapped up our day doing what dozens of other couple did—we stood on the bridge between our side of the river and the Old City and just watched the sun set, picture courtesy of Loraine— 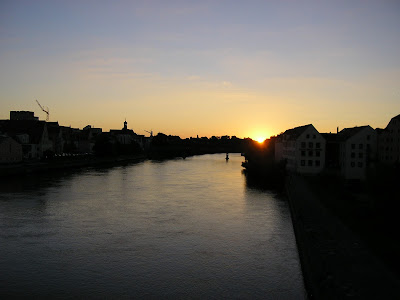 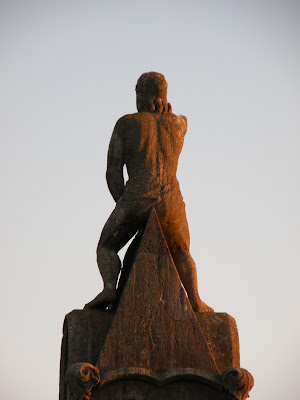 No, that’s okay.  You can thank me later.