Dangling Over a Lake in Germany??

I am never going to eat again.

We went out for our traditional “Last Night in Berchtesgaden” dinner at a restaurant 4,000 feet in elevation called The Hochlenzer, where they serve some of the best schnitzel known to human-kind.  The servings are kinda big, too— 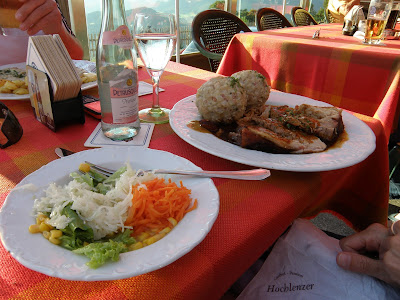 And if that wasn’t enough, then you have to have Apple Strudel (the real stuff) with warm vanilla sauce for dessert— 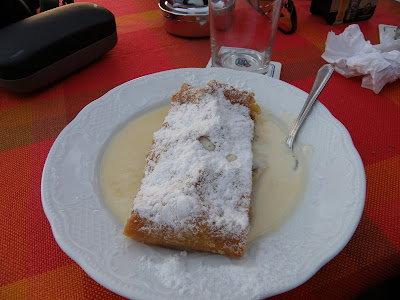 NOW do you see why I’m never eating again, especially when you consider that the bowl is a foot in diameter?

Actually, we could probably eat as much as we want, considering what we did today.  If there’s one thing the Germans love it’s hiking.  And since we’re staying at the edge of a German National Park that has the best hiking trails in the country; well, we just decided to do what the Germans do.  So we got up bright and early and headed out to a lake called Konigssee.  First we kept to the beaten path (albeit a beaten path that looks like something out of "Dracula", thanks to fog that hadn't burned off yet)— 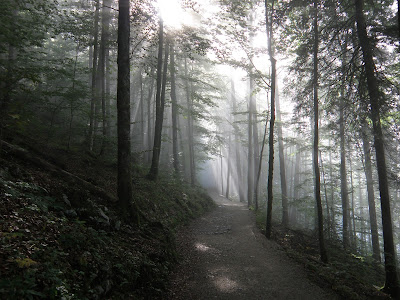 But since Tony the Tour Guide spent years working here he knows all the little ins & outs of the area.  So we left the beaten path, jumped over some rocks, down a few hills, and amped up the degree of difficulty on to a trail like this— 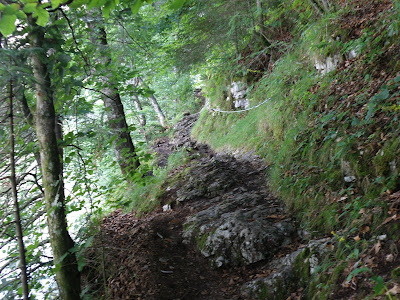 A trail full of wet rocks that had a cable fastened to the rock wall so you’d have something to hang on to and wouldn’t fall into the lake.  I won’t lie; it was a challenging hike, but 45 minutes later, it was worth it when we saw this— 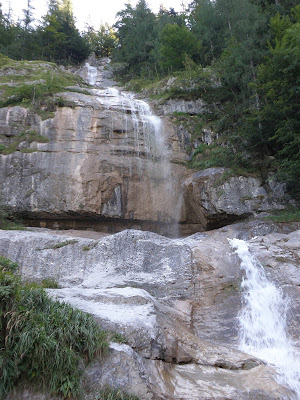 That’s a waterfall called Konigsbach, and this is the place where the higher you hike, the more “clothing optional” it becomes.  And I can understand why, as you’re sweating like a pig by the time you get up there.  We were lucky; we made it up before the sun hit our side of the mountain.  I can’t imagine what how much sweat would’ve been dripping from us if it would’ve been later in the day in full sun (and when the temps hit 88).  As it was, we just cooled ourselves by sticking our feet into the cold water that pools everywhere along the waterfall’s path, and gazed at sights like this— 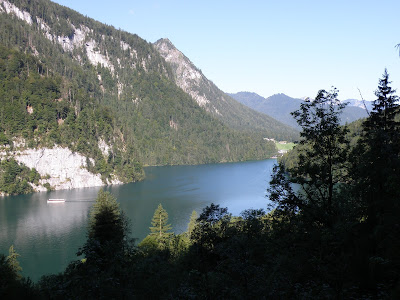 We made it back down, ate some well-deserved ice cream (I had marzipan, Loraine straciatella & Mozart Ball (don’t ask)) and then drove a little bit to have a proper lunch, in this setting— 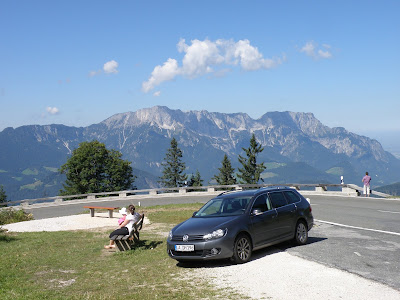 This is actually on what’s called the Rossfeld Panoramastrasse, a road that straddles the border of Germany and Austria, and a road that gives you great views wherever you look, especially when Tony throws on a CD of Bavarian folk music (complete with one track that has a wooden spoon solo!)  For instance, say “hello” to Salzburg, Austria— 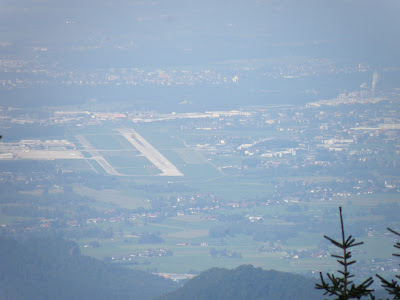 And to other mountains of Austria (picture by Loraine)-- 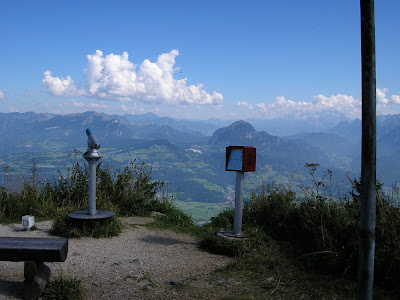 We actually have a hundred or so pictures of the Alps, but in no way wanted to bore you with them.  It’s just that everywhere you look, there’s a great picture waiting to be taken.

Speaking of which, we visited a cemetery, as well-- 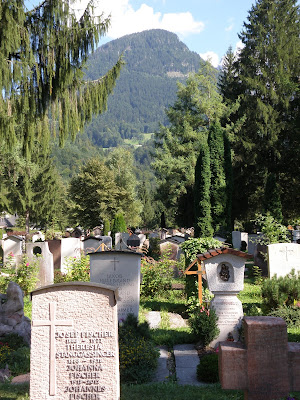 Sad to say, the fun is almost at an end.  We have to head back to Munich tomorrow to catch our plane home (very) early Sunday morning.  We will be stopping for a bit at one of Europe’s great city parks, though, Munich’s English Gardens, so while the fun it almost at an end, it’s not over yet.

(p.s.—I will most certainly do my best to post one of these tomorrow, but the last time we stayed at the hotel we’re staying at, their internet network blocked Blogspot, the service I’m using, one owned by Google, as a “pornographic site”.  Hopefully, they’ll have updated their filters by now!)
Posted by Jim & Loraine Explore Europe at 4:05 PM