And now the game of Tetris begins.

Greetings from a hotel right outside of Tegel Airport in Berlin, where we're camped out awaiting a (gulp) 4am wake up call to begin our journey back to the U.S tomorrow. Or, to put this in perspective, if it's still Tuesday when you're reading this, we'll be getting up at 10 pm tonight Eastern time. And, assuming rain, thunder, snow, fog, ice, lava, a meteor strike, or a plague of locusts doesn't delay any of our flights, we'll make it back to Marquette just before 9 pm Wednesday night.

The Tetris game to which I referred has to do with packing all the crap we bought here into the suitcases with everything else. Because this was a shorter trip than usual and because the DB trains we were on have certain size requirements we had to bring slightly smaller suitcases than we usually do. However, it seems like we bought just as much in the way of chocolate, soccer jerseys, chocolate, boxes of cereal, and chocolate, so the game's afoot as to where everything goes and how it'll all fit in. I have confidence we'll each be able to do it. It'll just be interesting to see what ends up where.

Our train didn't leave Leipzig until just after 11 this morning, so we were able to walk around a little more and take a few last loving looks at the views-- 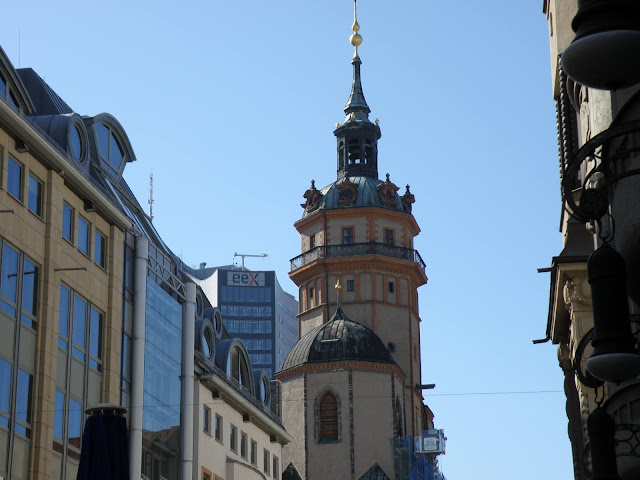 It was also one of their two market days for the week, so you know we had to swoop through there-- 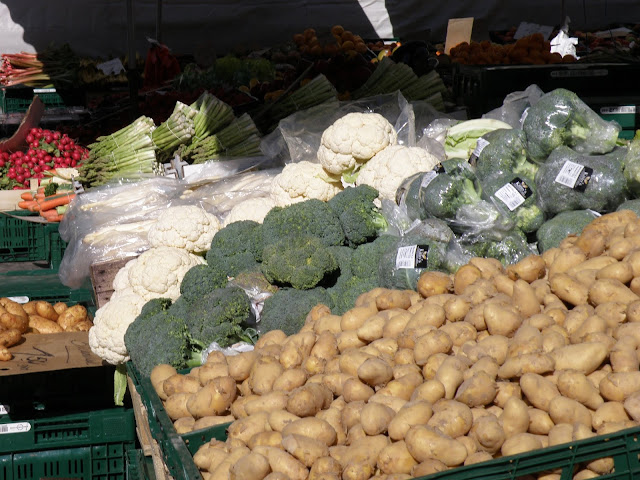 We were able to see a few things we hadn't yet, one serious and one not. The serious one? A few Solpersteine, or Stumbling Stones. 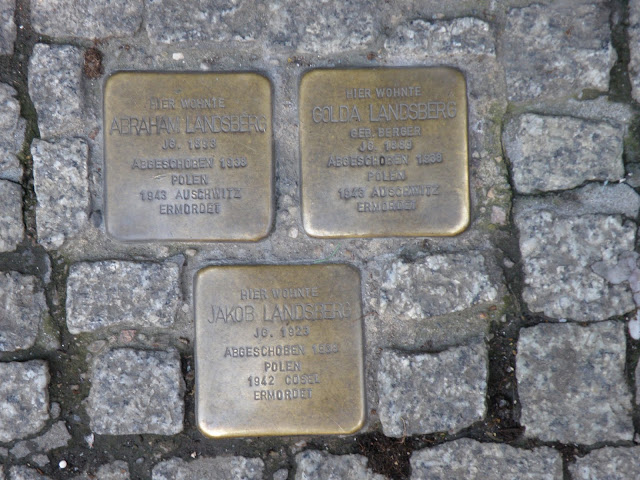 These are placed in cities throughout Germany in front of buildings where Jewish people were stripped of their rights and their property during the Nazi regime. The stones also tell the ultimate fate of whoever lived in that building; in the picture above Abraham and Golda Landsberg died at Auschwitz, while their son was killed at Cosel. These stones, laid in city sidewalks throughout the country, are a vivid reminder of what happens when evil people enact evil policies. You know the old saying that those who don't know history are condemned to repeat it? Well, I'm glad to know that Germans are making sure that people know their history, at least in this regard.

It's probably something more countries around the world should think about.

The non-serious thing we saw? A store dedicated to kitschy stuff from the days of the old East Germany! 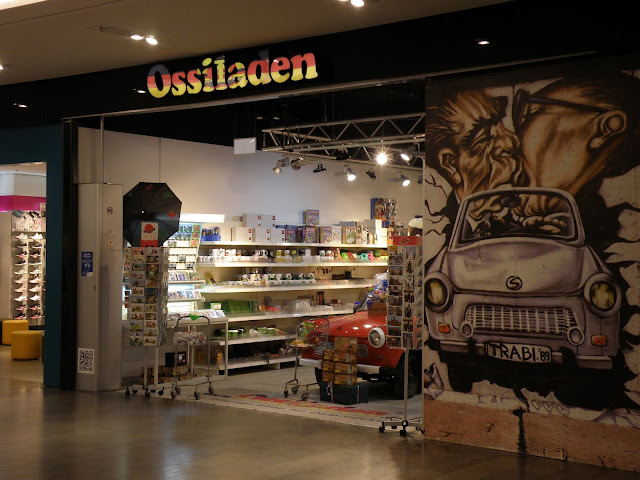 “Ost-stalgia” is actually a thing in parts of the old DDR. But, then, I guess if you lived under a certain system for 40 years the people who were around then may have some memories of it, and the people born after reunification may wonder what their parents and grandparents went through. However, something I saw in the store made me laugh at the irony of the whole thing. I don't know if this was done on purpose, or if it was something someone didn't fully think through, but there was a Monopoly game based on the old East Germany for sale there. Think about it for a moment—Monopoly, perhaps the purest form of capitalism you can find in a board game, with a version set in a communist country.

Ironic, right? Or maybe that's just me. That often seems to be the case.

We then hopped aboard a train, a bus, and a hotel shuttle, and only two or so hours later ended up at our hotel in Berlin. And for an airport hotel, it's not too bad. There's even a little green space nearby-- 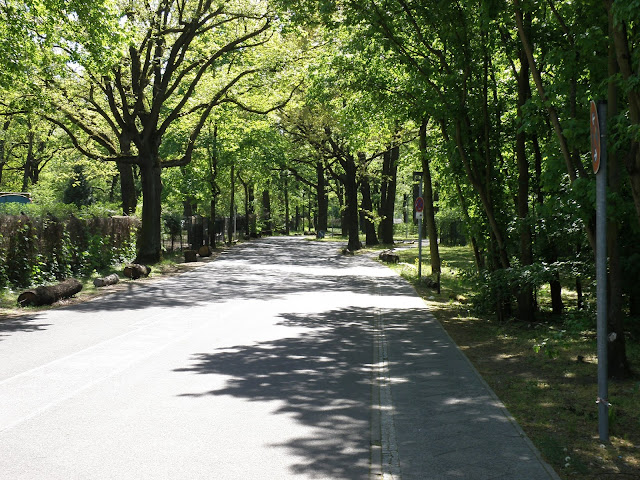 So Loraine and I were able to get out and enjoy some sun. And in that regard we've been really luck this trip—with the exception of the cold rain yesterday the weather this past week has been great. In fact, in some cases it's been downright amazing, especially considering it's still April. Maybe, just maybe, Mother Nature was trying to make up for our trip last year, when it rained for six straight days.

If that's the case, we really appreciate it.

Like I said, we're getting ready to fly out of Berlin tomorrow-- 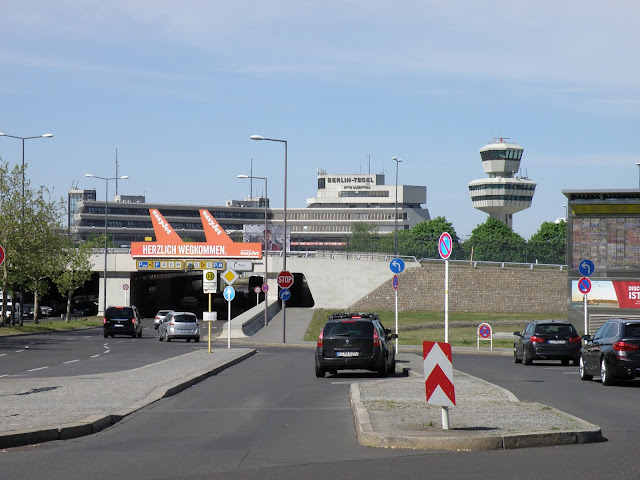 From Tegel Airport, which is not even supposed to be an airport any more. Let me explain--

Almost ten years ago construction started on a huge new, state-of-the-art airport 20 or so kilometers outside of the city called Brandenburg. Brandenburg was supposed to replace three old, small Cold War-era facilities right in the middle of Berlin, Tegel being one of them. It was supposed to open in 2013 to great fanfare. In fact, they even shut one of the three old airports down and turned it into a park. However, in a series of great embarrassments for vaunted German industry, a series of engineering and construction problems didn't allow it to open on time in 2013. In fact, the problems kept popping up and popping up, and six years later—SIX YEARS LATER—there's still no opening date for Brandenburg Airport. It's almost like it became a monument to major incompetence, sitting out on the Autobahn. So Tegel—an airport that's small, cramped, and lacking any major sort of luxury whatsoever—is still in use, and will be for the foreseeable future. In fact, there's now an outcry among Berlin residents just to scrap the boondoggle and to upgrade Tegel.

I'll be curious to see how that turns out.

Well, since we have to wake up just as you're sitting down to watch “NCIS: New Orleans” or the 10 o'clock news, I suppose I should wrap this up. I'll leave you with today's totally gratuitous lilac picture, this time with a road work sign that has a KFC sticker attached-- 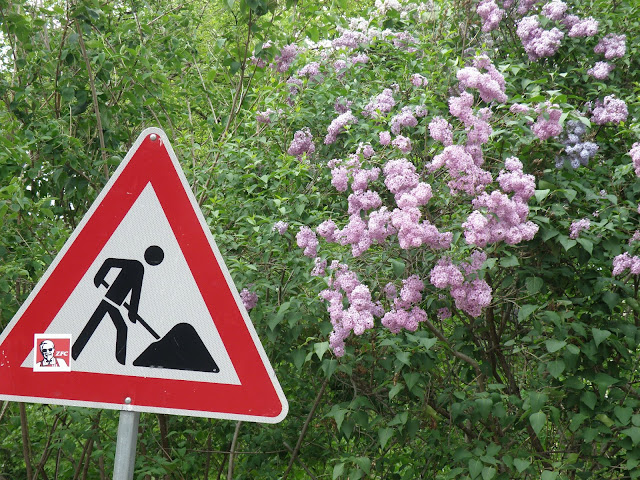 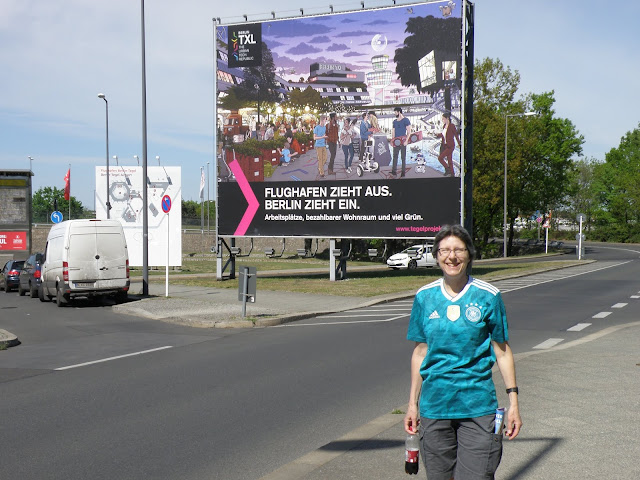 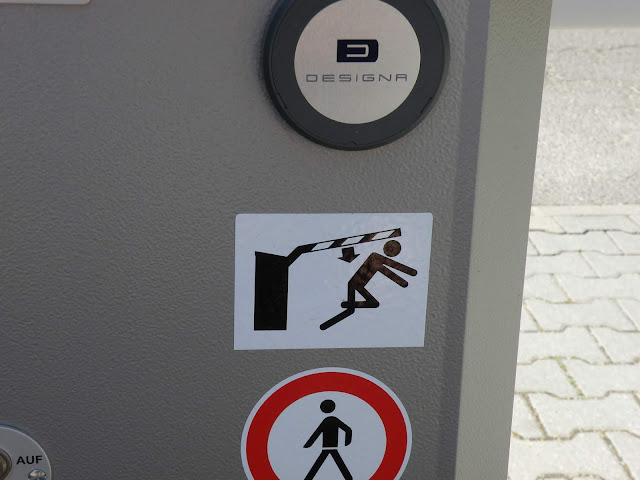 Even though we're flying home tomorrow that doesn't mean these are finished. After all, we have a four hour layover in London and a seven hour flight back to Chicago, and I have lots more pictures and all kinds of stuff I'd still like to discuss, including (but not limited to) punk rockers, how orderly the Germans are, even when drunk, a store that made us squeal in delight, upcoming German elections, how I actually have roots in this part of Germany, my niece Mallory's annual picture, and the weird flavor of potato chips I always eat when stuck in a London airport.

Oh. And don't be surprised if lilacs and a little more 1989 protest history shows up, as well.