Did you know there's a way to travel that doesn't involve waiting in lines, sitting in cramped seats, having your knees bashed by people in front of you reclining their cramped seats, and having to subject yourself to body cavity searches?

It's true. I know, because we did it today!

Greetings from Leipzig, our home for the majority of this trip. For the next five nights, in fact, we're living the high life (or at least life on the fifth floor) of the Motel One Nikolaikirche. And we get to overlook a piece of German history-- 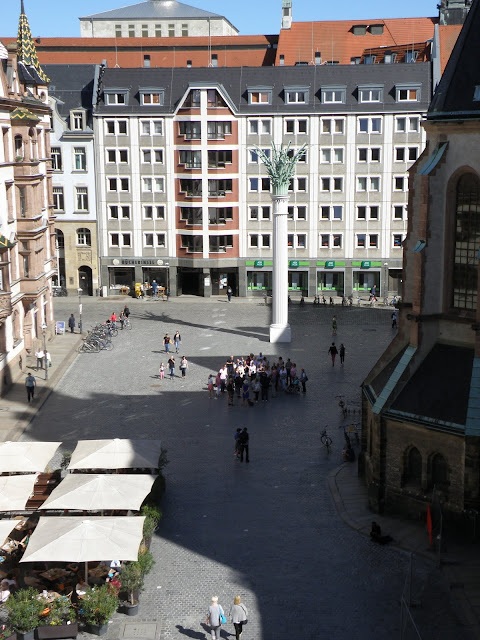 The story of why it's so historic in a bit.

First, though, let me circle back to how we got here, because it was a little amazing. For instance, how would you like to travel the distance from Marquette to Green Bay in just over an hour, where you would just have to show up at a place, go down some stairs, and hop into a vehicle without standing, waiting, showing thousands of documents, and having dozens of people eye you suspiciously? Well, you can.

You just need to travel by train.

It's true. We just showed up to this place in Berlin-- 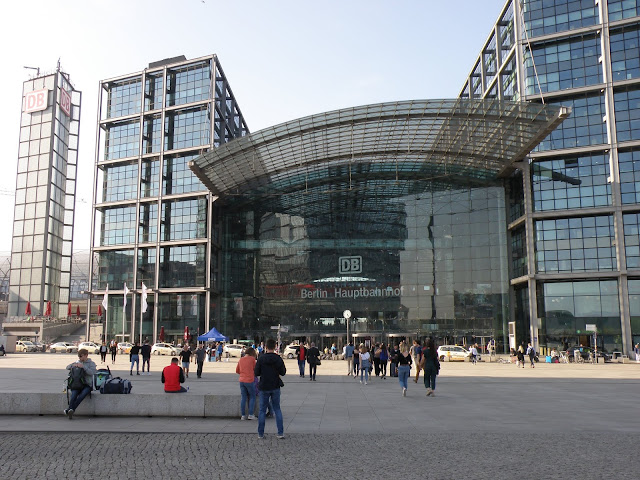 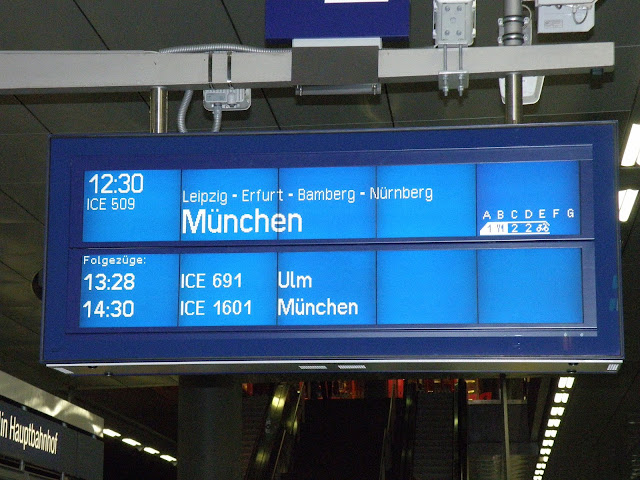 Hopped aboard this thing-- 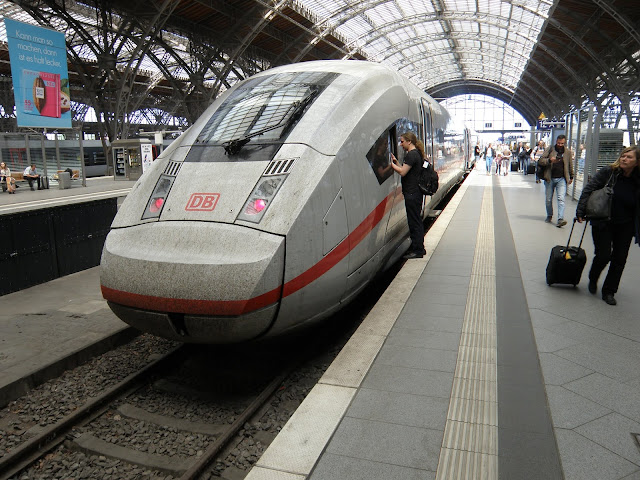 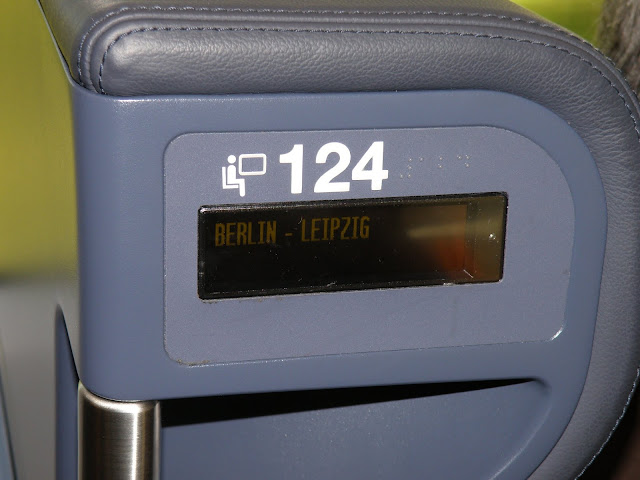 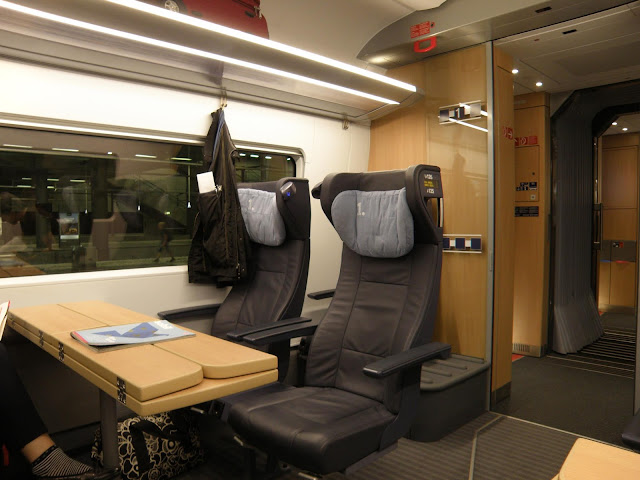 We then pulled out of Berlin and at 200 kilometers per hour found ourselves in Leipzig a little over an hour later. We literally (and I'm not kidding about this) spent that much time just going through security, “pre-boarding”, and then boarding our flight to London in Chicago Tuesday. If you could travel the same way in the U.S. I don't think that I'd ever fly again...and this is coming from someone who loves flying (just not the waiting and cavity-searching part). Besides, in a train you get to sit back, stretch your legs (an amazingly wondrous thing in and of itself), and look out the window, where you can see farm fields-- 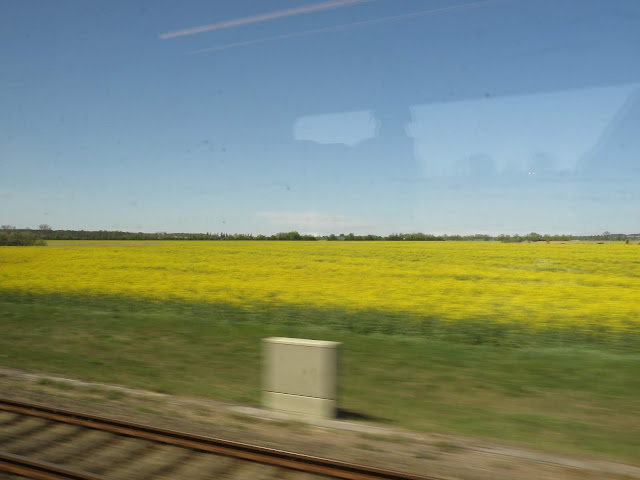 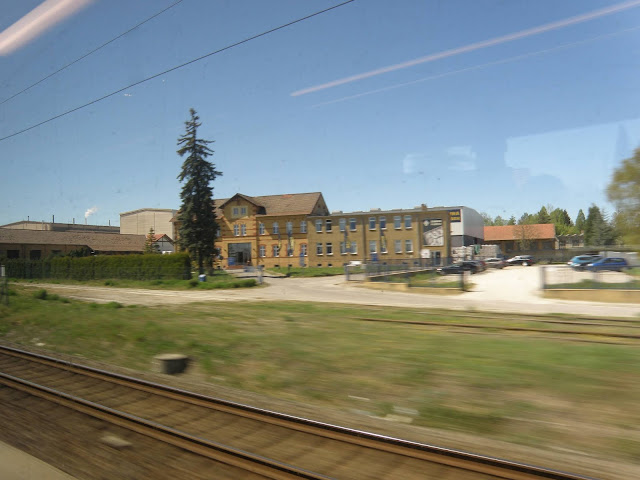 And things that most definitely do NOT cause cancer-- 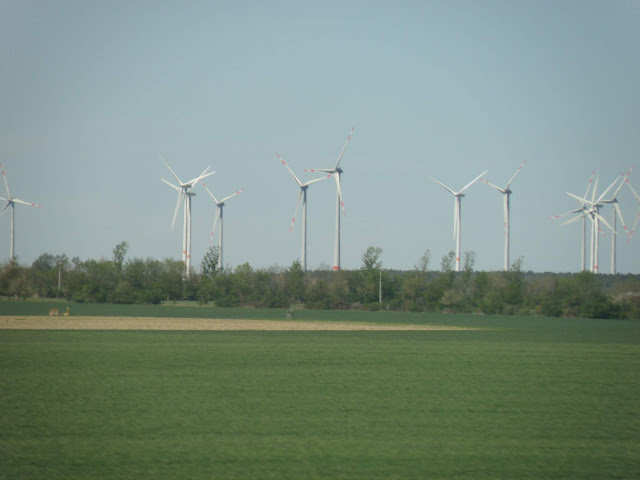 Germany, of course, gets half their electricity from wind & solar power, with the goal of using 100% renewable energy in the next decade.

Heck, during your ride you can even get into a race with a slower train that goes from small town to small town-- 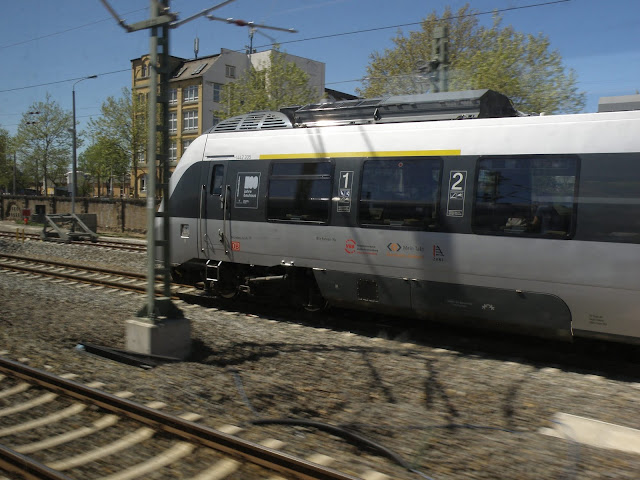 Our hotel in Leipzig is a short walk from the Hauptbahnhof (the train station where we arrived) and once we checked in we made our way out into another 80 degree day to one of Loraine's two Holy Grails, the RB Leipzig fan shop-- 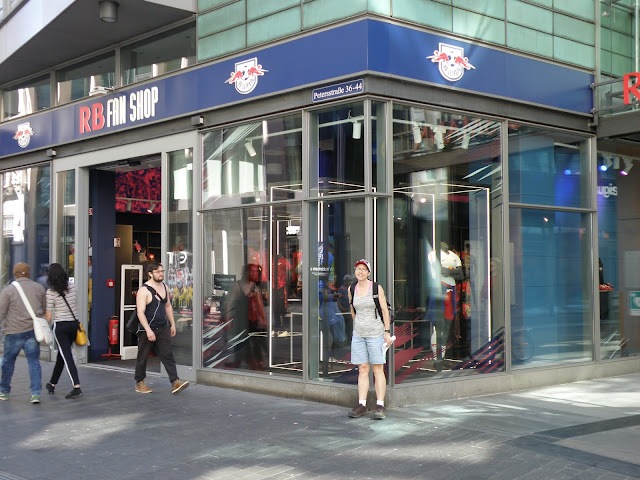 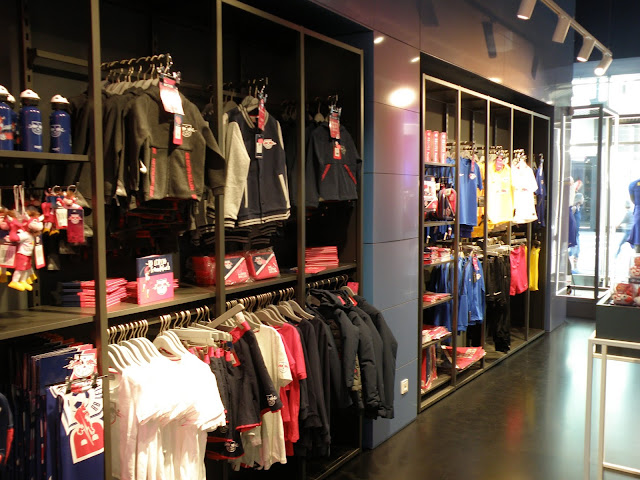 Going through shelves and racks filled with nothing but merchandise from her favorite team. I have to admit I had a good time, too, and since it's near the end of the Bundesliga season and almost everything was on sale...well, we may have bought a few things-- 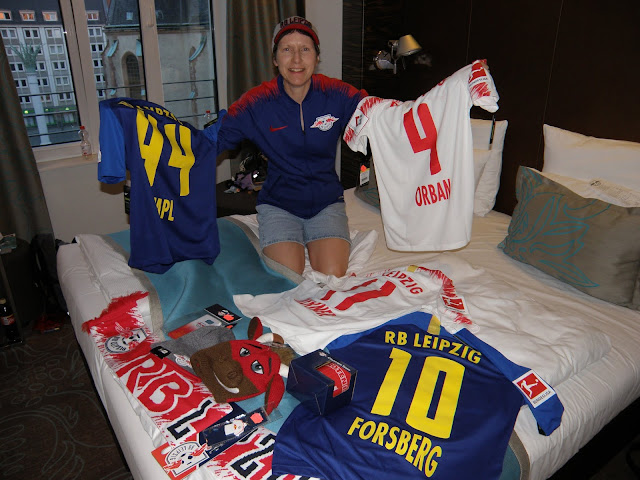 But that's why we came to Leipzig. Well, that, and Saturday's game against Freiburg. But you have to be properly outfitted for the game, right?

The city itself is an amazing place-- 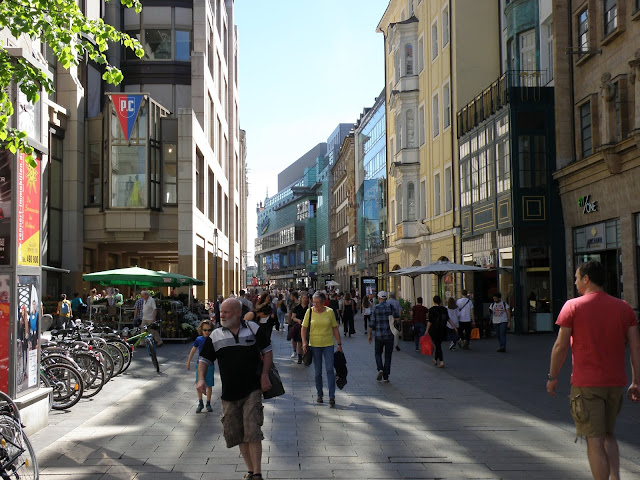 It's a big university town with lots of history, lots of great food, and, perhaps most importantly, lots of music. Leipzig prides itself on its musical heritage, both past & present. Bach used to play organ at the church across the street from our hotel, and even today everywhere you go you're serenaded by street musicians, from a guy playing an accordion-- 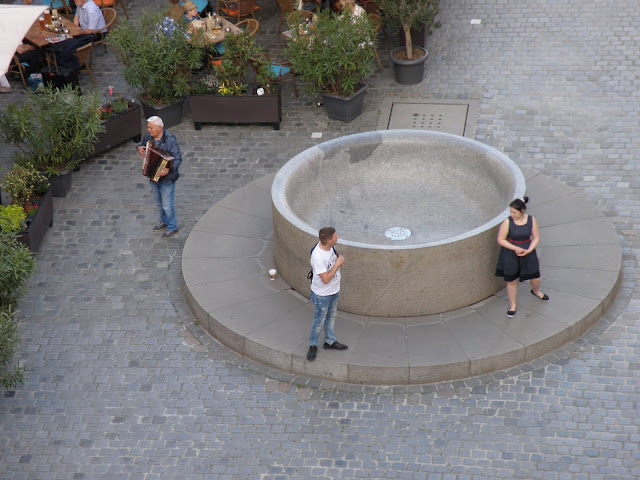 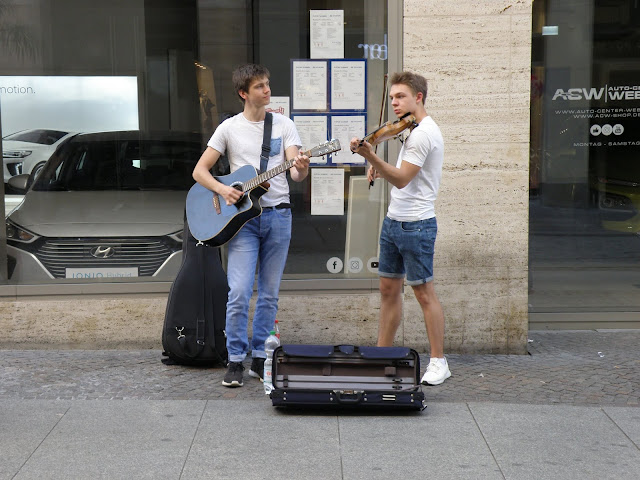 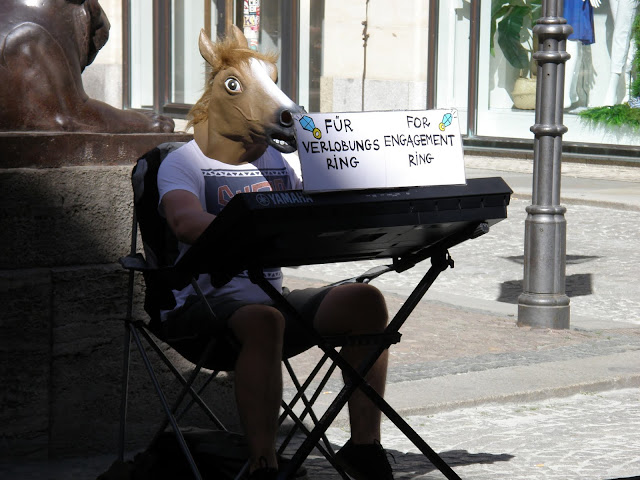 In fact, even as I write this (at 10 pm local time) you can hear someone playing the organ at the church, part of a night tour for people who want to learn more abut the city's musical history, along with someone playing a piccolo and someone else whistling along either one or the other. This really is a cool place.

Okay, I suppose I SHOULD wrap this up if I ever want to get it posted. So, with your permission, I'll save the history lesson I promised earlier for tomorrow. After all, it probably won't be changing before then, will it?

So on that note, I'll leave you with a gratuitous shot of a statue surrounded by lilacs-- 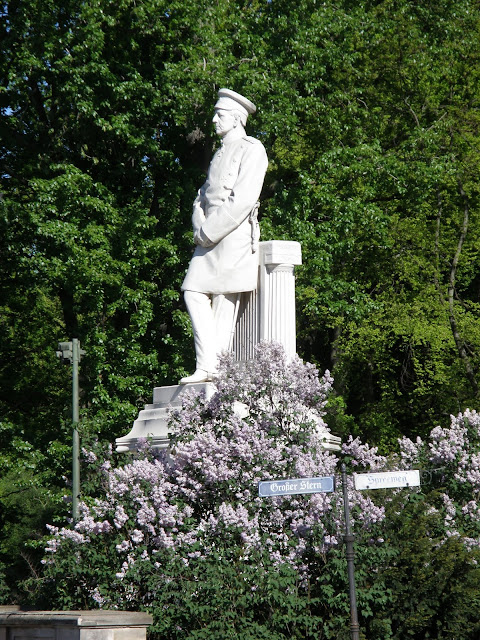 And what half-priced leftover Easter candy looks like in Germany-- 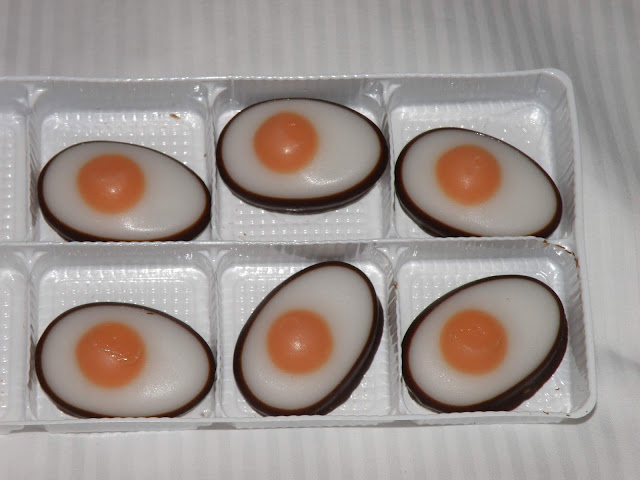 The amazing thing about those? They actually an an egg-liquor taste to them. Imagine that. Candy eggs that actually taste like eggs. Who knew??

Tomorrow, we buy a pass and jump on the tram. So until then...