The Day of Living Internationally

Since Loraine handled her German press conference like a pro, we celebrated by eating Indian takeout food. But this wasn't before we had lunch with a Greek guy who kept wanting us to do shots of Ouzo with him.

Yup. It was that kind of international day.

It's our last night in Leipzig (he says with a heavy heart), although the vast majority of the day was spent in the town of Weissenfels, about 30 kilometers southwest of here. Weissenfels is the town where the subject of Loraine's first book, Sgt. Elwood Norr of Marquette, was shot down during a bombing raid on a nearby chemical factory in November of 1944. The first time we were here Loraine presented a copy of her book to the town's mayor; today, she did the same with her second book, which documents (among many other things) our first visit. And just like the first time, the press was invited to the presentation, which the author nailed-- 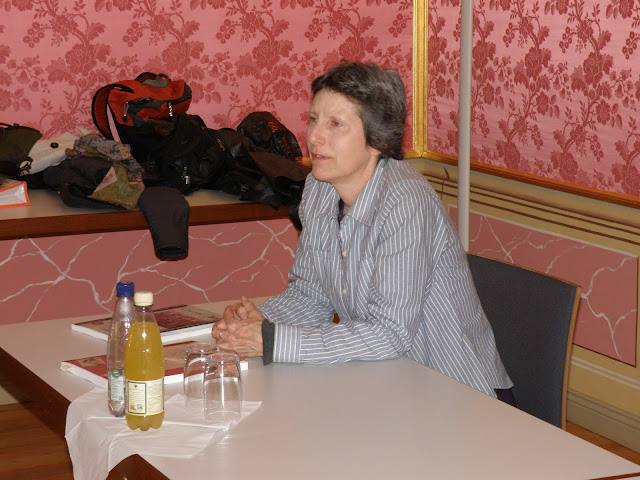 I say this kind of in jest but actually not really in jest, because it's probably true—I'm married to someone who may be the most famous American ever to visit Weissenfels. At least that's what it seemed like. We were met by our friends Anja, who works for the city's department of cultural affairs, and Gudrun (or “Gudi”, as she insists on being called), who's on the town's council and is an all-around force of nature. They greeted Loraine with flowers-- 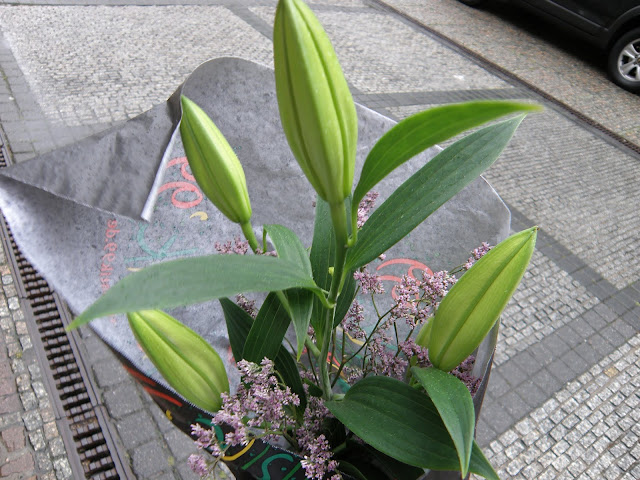 And squired us over to this restaurant-- 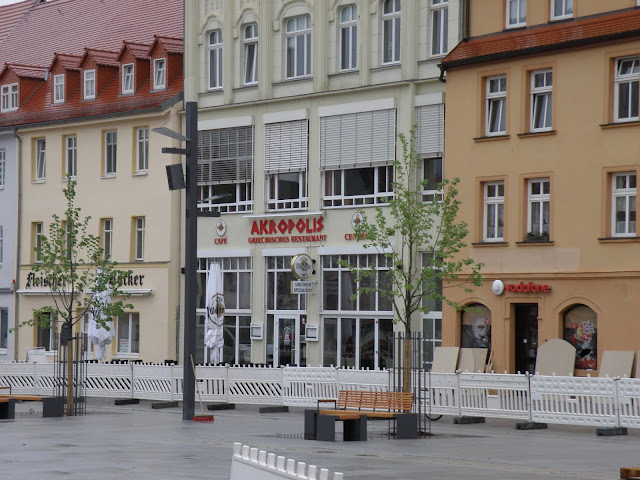 Which opened early just for Loraine. When the owner arrived during lunch he insisted we all do shots of Ouzo with him; then after we finished eating he brought another round over. You know, to help with our digestion-- 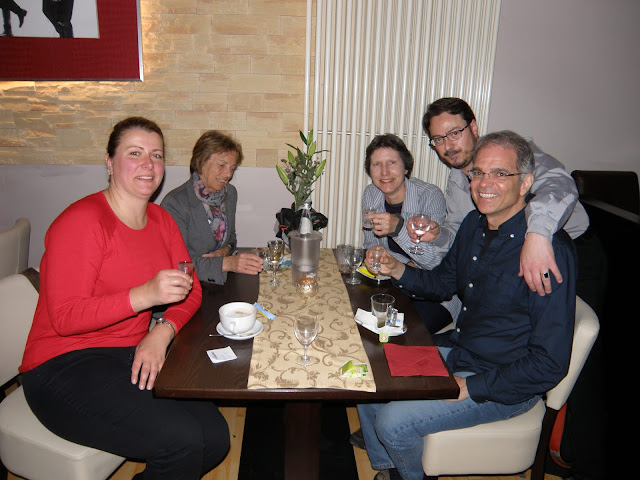 We then made our way over to the town hall, where we must have followed a dozen signs like this that led to the room with the press-- 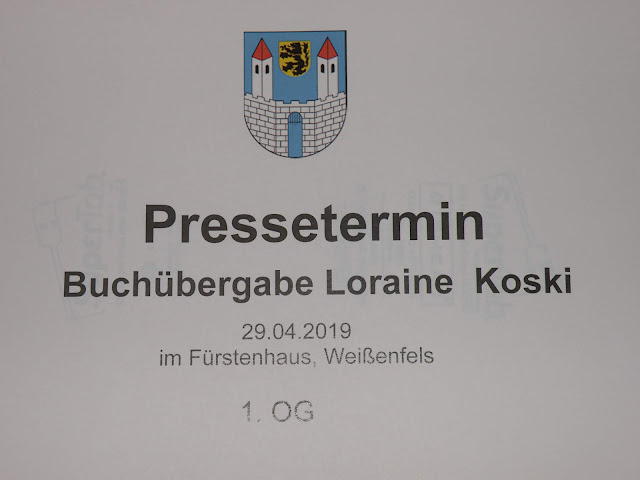 While it wasn't a big press gaggle, it was a gaggle nonetheless, with several reporters asking Loraine questions about her books, her research, and why we made our way back to Weissenfels after six years. They also seemed fascinated by the fact that we would come all the way from the U.S just to see a soccer game, and ended up asking Loraine a few questions about that, as well. Following the questions, Loraine presented the book to Gudi, as a representative of the city, with press photographers snapping away-- 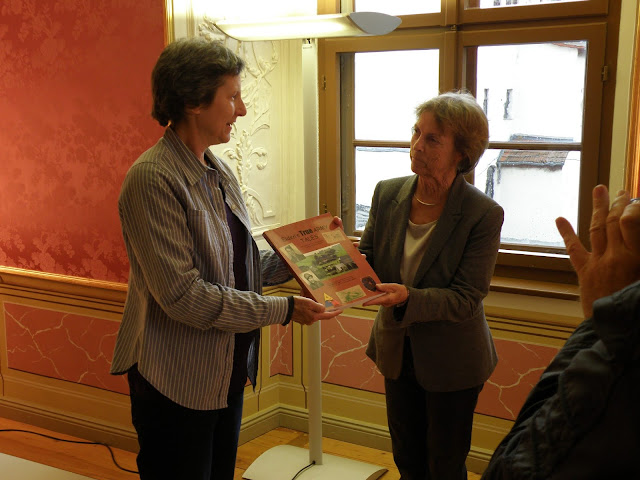 And we were then taken off for a VIP tour of a museum dedicated to one of the town's most famous residents, a 17th century composer named Heinrich Schütz, who's considered Germany's most important composer prior to Bach and who was apparently quite the innovative writer of choir music. Just how VIP was the tour? Well, the museum is usually closed on Monday, and the director of the center spent the day before his vacation just to show us around.

THAT'S why I say Loraine's the most famous American to visit Weissenfels.

Weissenfels is a very interesting place-- 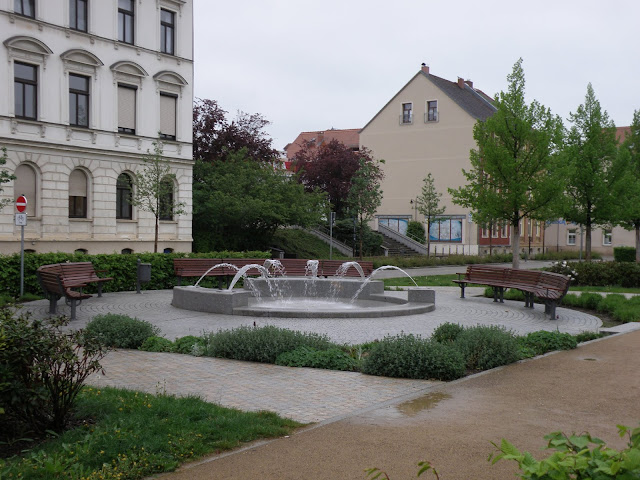 It's about the same size as Marquette, has a lot of hills in it, and has a history of mining, to boot. But I also found it interesting in that it's like a lot of towns of the old East Germany. In the 30 years since the Wall came down large chunks of the city are fresh & new, witnessed by a new bus station and by the renovated market square that opens to the public next week-- 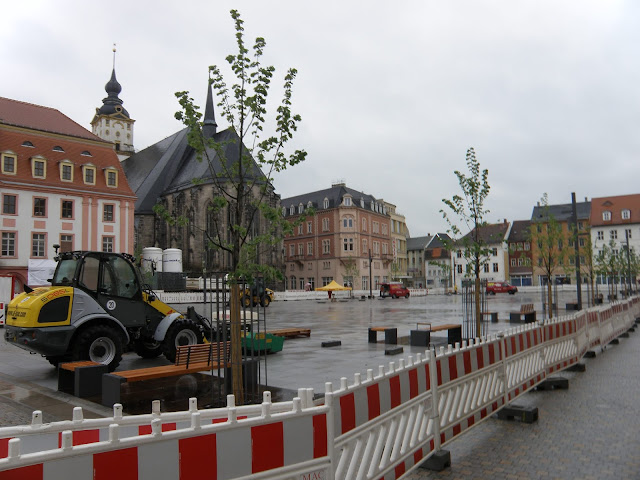 But also with a lot of buildings that have just sat unused for three or more decades, like this old textile factory. 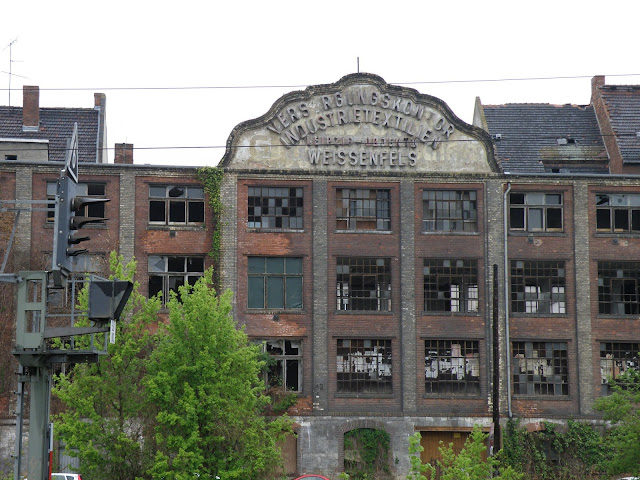 Much like Marquette, they're trying not to tear down those old buildings, but to find some reuse for them. However, you need money to rehabilitate structures like that, and the funding isn't always available. They're hopeful, though, and with any luck that factory will soon be home to any number of uses.

After all, the great people of Weissenfels deserve that. And they also deserve many thanks for the way they treated Loraine (and the dork she brought with her) today!

Other than the visit to Weissenfels and the train ride there and back we really didn't have much time to do anything else today so, sad to say, no pictures or videos of street musicians. Of course, the fact that it was cold & rainy today probably kept many of them indoors.  I will, however, give you a totally gratuitous of shot of lilacs, with the French flag in the background-- 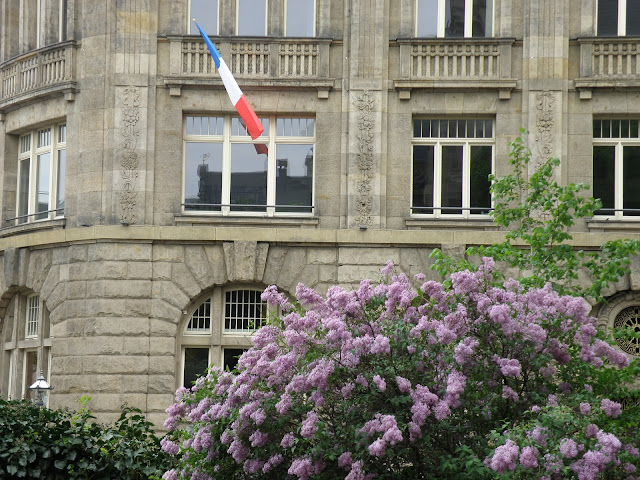 And today's musings on the 1989 revolution. When we checked in the people at Motel One somehow knew we were here celebrating our anniversary, so they gave us tickets to use for free drinks at their bar. In honor of Loraine's amazing day we took them up on their offer, used the tickets, and sat in the lounge, which is plastered with murals celebrating the massive public protests that were Leipzig's part in bringing down the DDR-- 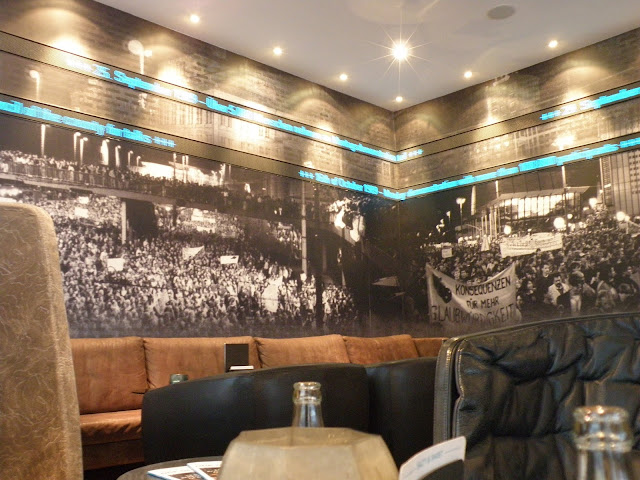 I've probably said it before, and I may end up saying it again, but this is such a cool place. The history, the music, the food, the people. A sticker Loraine pointed out plastered to an electrical box Saturday probably says it best-- 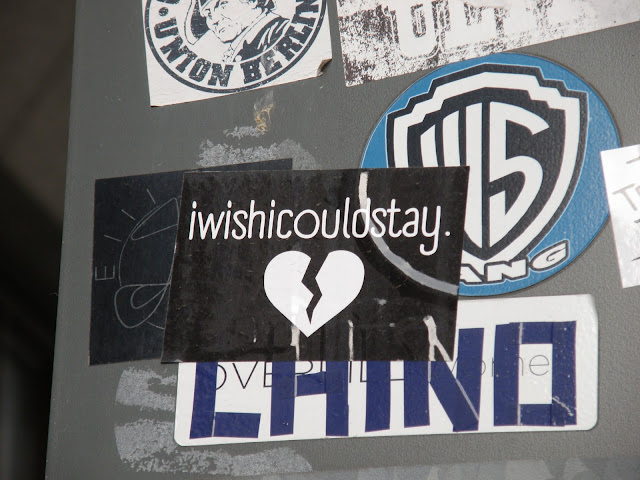 But, alas, we can't. Tomorrow morning we hop back on the high-speed train to Berlin, where we spend a few last hours before heading home on Wednesday. So until then, with the thought that parting is such sweet sorrow...