Why You Should Always Admire A White Rose

And the fish in our aquarium say “hi”!

Now, admittedly the fish are just floating by on the TV screen in our hotel room in Munich, Germany, but they’re nonetheless nice and polite fish and merely wanted to send a little German hospitality your way.

So now they have.

Today was what’s known in the travel biz as a “transfer day”.  We ended up driving almost 500 kilometers down the German autobahn from Strasbourg, where we stayed last night, to Munich.  You know all those stories you may have heard about crazy German drivers on said autobahn?  Well, they might be true.  Tony the Tour Guide wanted to see how well the rental car handled, so he got it up to about 160 kilometers an hour (about 100 mph).  And you know what?

People were flying passed him!

We did make a couple of stops today, one in the city of Ulm, which claims to have the tallest cathedral in the world-- 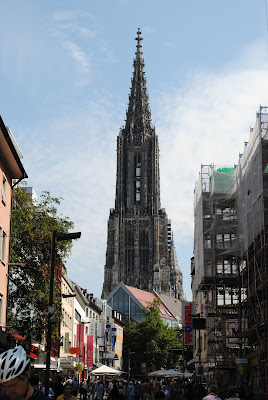 You know, I guess it IS pretty big.  Ulm’s also the birthplace of this guy— 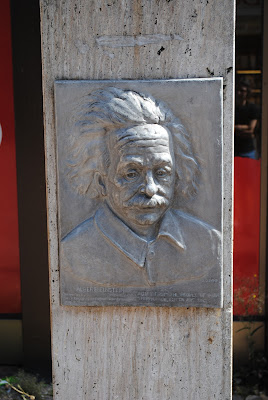 That’s Albert Einstein, by the way, in case you couldn’t tell.  Ulm can also claim this remarkable young woman as one its own— 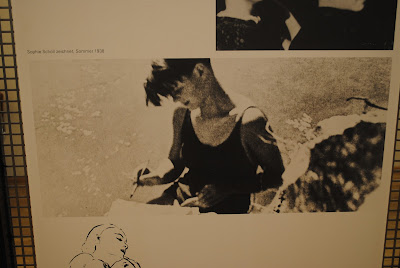 Sophie Scholl, along with her brother Hans and their friends Alexander Schmorell and Christophe Probost, were part of the White Rose resistance movement during World War II.  Students at the Ludwig Maximilians University here in Munich, they defied numerous laws by printing up and distributing anti-Nazi leaflets throughout a big chunk of the country in 1942.  Although they were careful to cover their tracks, the Gestapo tracked them down, convicted them in a sham trial, and beheaded them, all in a vain attempt to show German citizens the error of trying to resist the government.  In the years since, the Scholls, Sophie in particular, have become symbols of freedom and the best that the German people have to offer.

They’ve become such symbols, in fact, that the University has all kinds of things set up to honor them, including this, which is on a sidewalk outside of a classroom building— 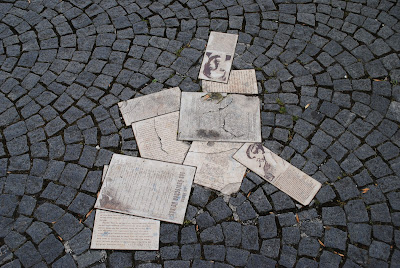 This display symbolizes one of their most famous acts, which involved standing in this hall— 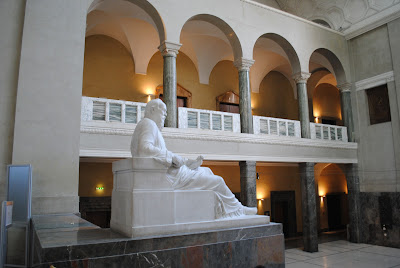 And pushing hundreds of their leaflets over the railings onto the floor, where students could read the anti-Nazi literature.  Sophie’s also honored with a bust inside the hall— 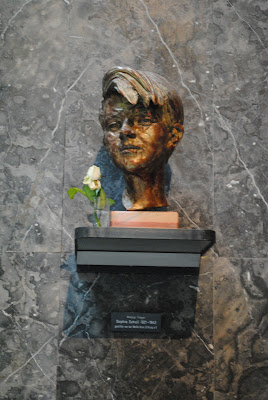 There’s also a whole room in the same building devoted to their life story.  We need to thank the lady who runs it right now as she was getting ready to close it up for the day, and was persuaded by some glum looking faces to keep it open a bit longer.  So as our way of thanks, if you’re on Facebook, why don’t you “Like” the White Rose Room by clicking the little thumbs-up thingee at www.facebook.com/WeisseRoseStiftung.  Sure, it’ll be in German, but everyone needs a little German on their newsfeed, right?

Finally, we made our way out to the cemetery next to the prison where Sophie and Hans were beheaded and paid our respects at their joint grave— 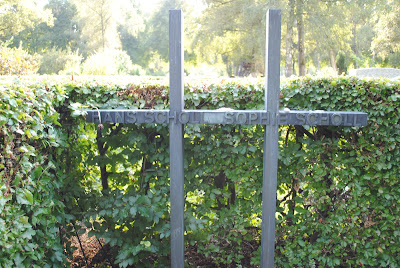 If you wanna know more about the story, I highly recommend the movie “Sophie Scholl: The Final Days”, which deals with everything I just mentioned and was Oscar nominated for Best Foreign Language Film to boot!

That was pretty much our day; we head into Austria tomorrow before returning to Germany to hang out in the Alps.  Here’s one final picture to wrap things up— 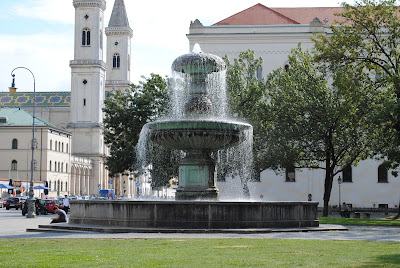