And greetings from a quarter of the way around the world!

We made it to Belgium just fine today, albeit an hour and a half behind schedule, thanks to a departure delay in Chicago and a weather delay in Brussels.  Never mind that, though...despite the loss of time and the complete lack of sleep, we achieved everything Loraine had on our jammed packed schedule. 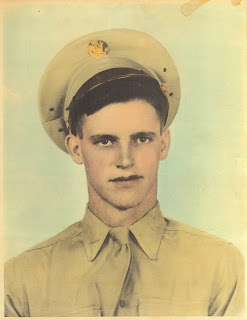 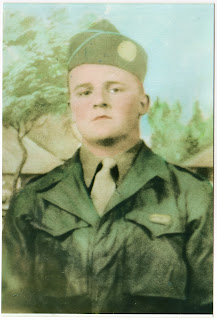 They are Eugene St. Onge of Marquette and Eino Kinnunen of Munising, both of whom died around this area in the Battle of the Bulge, St. Onge was killed trying while trying to re-liberate the town of St. Vith, while Kinnunen died of wounds received during fighting between the towns of Heid-de-Heirlot and Odrimont.  We traveled around quite a bit of Ardennes countryside so Loraine could get a better idea of what those two did during their final days, and so I could gawk at scenery like this— 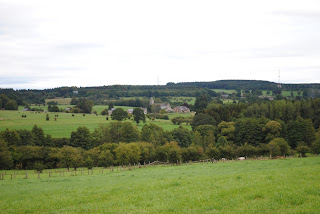 It was cloudy and occasionally rainy today, so the weather didn’t allow for the greatest pictures, but I think you get the idea of what it was like.  I think I may have mentioned this before, but this part of Belgium reminds me of the Copper Country, for some reason, with a dash of the area right below the Mackinaw Bridge thrown in for good measure.  So many of the war-related sites we visited today looked very much like that—lots of farm fields, rolling hills, and trees.  Lots and lots of trees.

However, not everything we did today was war-related.  I wanted to take a picture of something I saw in the town of Stavelot three years ago but never had the chance— 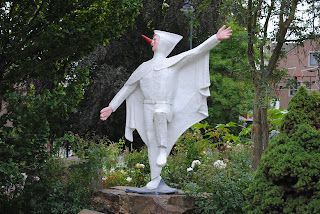 That’s right; it’s a statue of a giant puppet, which we affectionately refer to as (what else) “Pinocchio”.  Until a few weeks ago, we had no idea WHY the statue was there.  As it turns out, Stavelot actually holds a big puppet festival every year, and the statue commemorates that.

Next comes one of the things you guys say you look forward to the most, today’s animal picture— 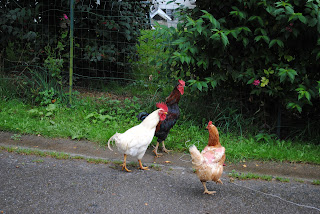 We actually had to stop the car and let these three roosters cross the street in front of us outside the town of Abrefontaine.  Trust me; they took their sweet time, and acted like they owned the place, which I’m sure they do, much to the chagrin of their owner.  So if you ever wondered why the chicken (or rooster) crossed the road, now you know--it was to make us slow down for a minute!

Since it’s Belgium and we’re only in the country for two days, we had to make Tony the Tour Guide stop at a few grocery stores so we could buy chocolate and Lotus Bimbos.  I picked up a brand-new kind to try out— 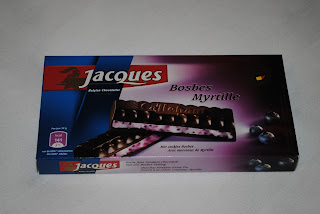 It’s a dark chocolate bar with a blueberry filling.  Yummy.

Finally, there was the aforementioned Tony the Tour Guide’s near brush with the Belgian police.  But we won’t go into that now...

Time now for a little sleep.  Tomorrow, we meet up with a 26-year old law student (and his fiancée).  Details then!