Attack of the (Bellowing) Zombie Cows

You know you’re in for an interesting day when the first thing that happens is a Belgian guy recognizing your wife in a hotel lobby.

That’s what happened to Loraine today as we were coming down to breakfast.  One moment we’re innocently getting ready to eat; the next, a very friendly man comes running over shouting “Loraine...is that really you”?  As it turns out, the guy was a Facebook friend of hers named Ivan Steenkiste, with whom she’s corresponded many times about a tank battle that occurred near Bastogne, one in which Republic’s Elden Gjers died.  Ivan was leading a group of war buffs from Georgia (the state, not the country) on a tour, just happened to be staying in the same hotel, and recognized Loraine from pictures she had posted.

Anyway, here are the friends after meeting in person the first time— 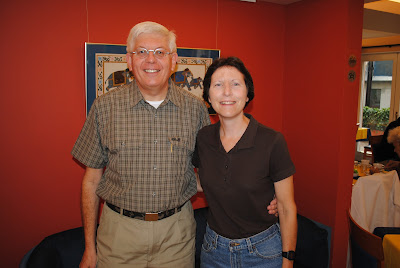 Then, believe it or not, just as I get done taking the above picture, ANOTHER Belgian guy walks up to me and says “Hi, Jim”.  Fortunately, we knew who THAT guy was, even if we had never met him in person before.  His name’s Pascal Hainaut, and he was showing us a few sites on our way out of town this morning.

He’s the one responsible for the zombie cows.

Let me explain.  He took us up to see a monument to the 35th Infantry Division, one of which the uncle of a friend of Loraine’s served in and was killed during the Bulge.  The monument—a very nice one, by the way—is located on top of a hill next to a farm, a farm that contains a large number of cows, all of which were on the far side of the field.  Because I know several of you are amused when I take pictures of cows, I decided to see if I could get the attention of one of them, and get it to come over and pose for me.

As it turns out, I got the attention of ALL of them, who immediately began bellowing quite loudly and moving toward me in the lifeless, herky-jerky manner made popular in “Night Of The Living Dead”. 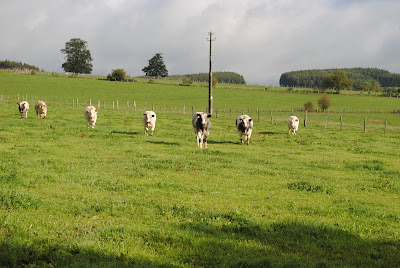 They finally all made it over to where I was standing, where they all looked at me like they were either annoyed or disappointed that I wasn’t there to feed them— 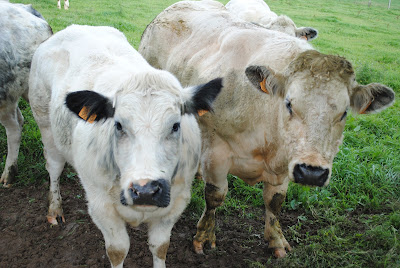 All I wanted was a picture, cows.  Nothing more, nothing less.  Sorry I didn’t bring any grub!

The next part of the day involved us getting lost in Germany.  Well, not lost so much as us wandering around without knowing where exactly we were.  We were trying to follow in the footsteps of this young man— 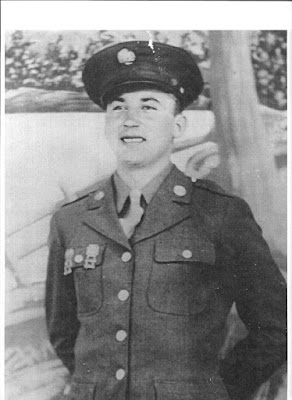 That’s John Zbacnik of Traunik, who died during the push into Germany in March of 1945.  We were trying to find the town in which he died, a little German hamlet named Schartzberg.  Tony The Tour Guide’s GPS system couldn’t find it, and none of the locals we asked knew where it was.  So as we’re driving around the middle of a huge German forest I pull out my phone and search Google maps.  Believe it or not, the town was on there, we found we were actually just a few kilometers from it, and three minutes later we found out why the village of Schartzberg is basically unknown to the world. 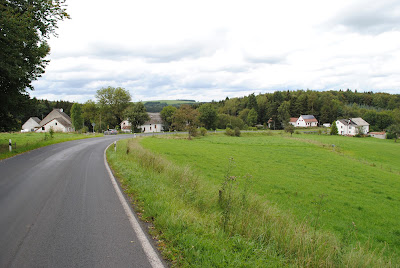 That’s right—it’s not really a village.  It’s five houses masquerading as a village.  Anyway, we found it, and were able to honor PFC Zbacnik’s memory.  And as an aside, if Kristi from AT&T is reading this, you were right—my phone CAN do amazing things in Europe.  Thanks for setting it up for me!

Lest you think we’re only over here for Loraine’s war stuff, we did take some time to play tourist today.  Our last stop of the day was the old (and I mean old, as in the first real city in Europe, or so the locals claim) town of Trier.  The town is built on a series of sandstone cliffs, which means that this town has something Marquette has—a TON of sandstone buildings.  Some were entirely constructed of the material; others just used it as trim, such as in this hotel— 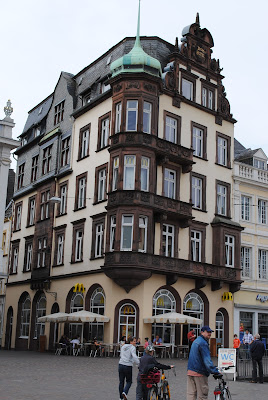 By the by...recognize the restaurant that occupies the bottom floor?

Finally, we stopped by the 2,000-year old ruins of a Roman amphitheater, a UNESCO World Heritage site.  This was a COOL place, still in pretty good shape— 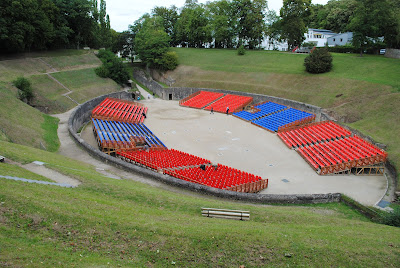 It’s amazing how modern-day arenas take much in their design from the Romans, although all the newer arenas are missing one feature that this 2,000-year old model had.  To prove my point, here’s Loraine and Tony the Tour Guide walking down the path to the amphitheater’s Vomitorium— 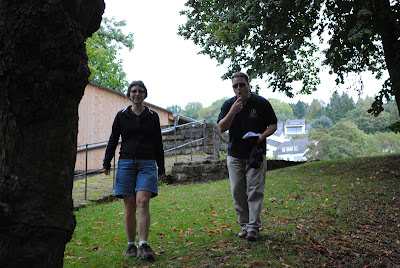 See?  We do more than just war stuff and chocolate when we’re over here.  We throw in Vomitoriums at no extra charge!

Okay, that’s a little TOO sick of a note on which to end this.  I’ll do it by sharing the view from our hotel window— 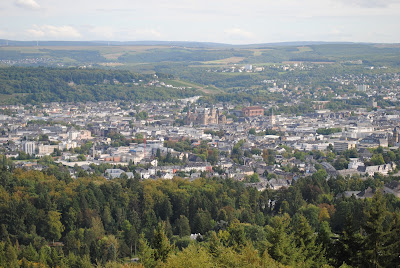 Tomorrow, we go to France.  Not our usual part of France, but one that’s been part of Germany on many an occasion.