If for some reason I don’t end up returning to Marquette next Sunday, look for me in Colmar, France.

We’re in Colmar as I write this, an enchanting city with an incredible old city section that I’ll fully dive into in just a moment.  We started out the day by following in the tank treads of this young man— 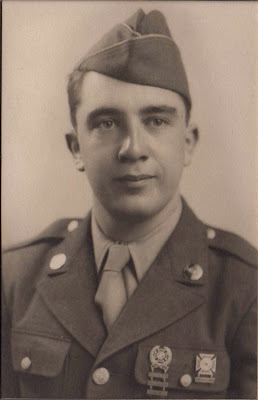 Private Robert Trottier of Marquette, who was an assistant driver in a tank of the 10th Armored Division and died near the German town of St. Wendel on March 18th, 1945.  And when I say follow in the footsteps, er, tank treads I do mean follow in the tank treads, as Loraine has gotten her hands on a report that showed what Trottier’s tank division did the final two days of his life.  So we followed the exact same route of Trottier’s tank, ending up at this roundabout on the western edge of St. Wendel— 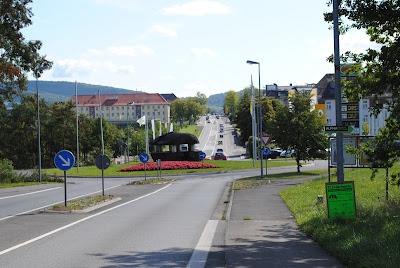 It was at this roundabout—a road checkpoint back then—that Trottier’s tank was destroyed by German anti-tank fire.  Tony the Tour Guide then noticed WHY Trottier’s tank group came under fire--no more than 200 meters from the roundabout sat a German military camp—a big one--from World War II.  The buildings are still there, still in use (although now as an office park) and still have carvings on them like this— 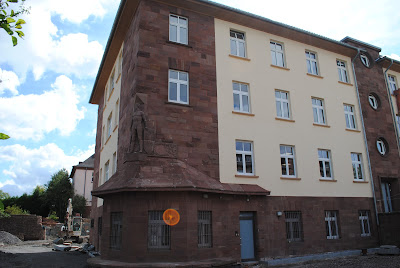 It may just be me, but I don’t know if I’d like to work in a building that has something like THAT carved into it.

(And by the way, I have closer-up pictures of the statue that show much more of the detail carved into it.  Unfortunately, they show TOO much detail, if you know what I mean!)

The rest of the day was spent driving through the Vosges Mountains to get to our current base in Colmar.  Remember how we saw a guy carrying a trombone Saturday morning and I couldn’t get a picture of it?  Well, I was ready this time!! 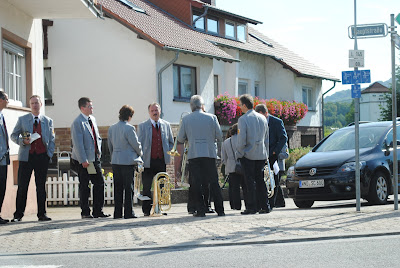 No, I have no idea why this oompah/marching band was on the side of the road on a German town.  It’s just one of things you have to see to believe, I guess.

Okay, now Colmar.  You know how I LOVE Bayeux, France, which is why we make it our home base every time we’re in Normandy?  Well, Colmar is kind of like that, but on steroids. 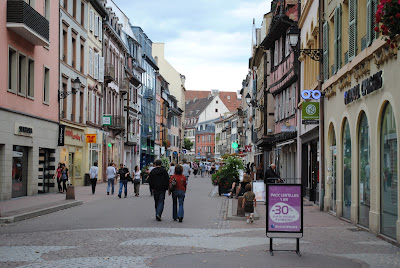 It has this HUGE old town, filled with things like soaring cathedrals, centuries-old half-timbered houses, and a statue of hometown boy Frederic-Auguste Bartholdi.  If his pose looks a little familiar, it may help to know this Bartholdi is the guy who designed the Statue of Liberty! 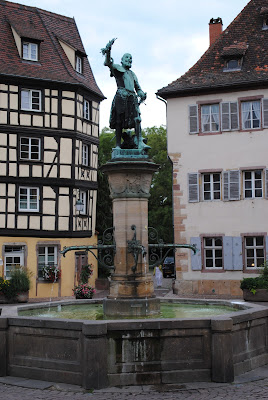 Like Trier yesterday, Colmar also has beautiful sandstone buildings, and some rather interesting cars, as well— 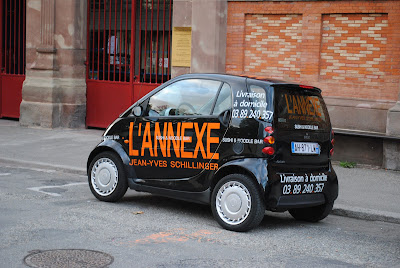 If you’re curious, this is a delivery car for a Chinese noodle restaurant.  I think if you put four containers of noodles in it the car’s filled to capacity.

Finally, here’s our dessert for the night— 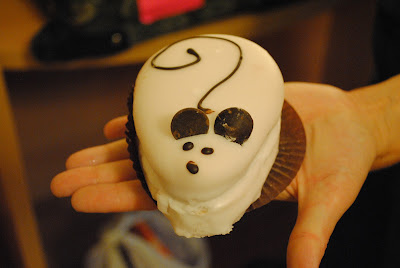 Sure, it may LOOK like a mouse, but it’s actually two pieces of very yummy yellow cake with a layer of custard crème between them.  I’ve said it before, and I’m sure I’ll say it again. . .

Tomorrow, one more day in France, with a trip back into the Vosges Mountains, this time with a particular purpose in mind.  More on that then!

(jim@wmqt.com), who apologizes for not getting yesterday’s blog up sooner.  I didn’t have internet access until tonight!
Posted by Jim & Loraine Explore Europe at 4:17 PM