On a Clear Day You Can See Mont St. Michel

We bought, ripped apart, and ate a pig for breakfast this morning.

No; we really did, and I have a picture to prove it which I’ll show you in a little bit.  But seeing as how it was sunny and 75 today, we took a road trip and visited the town of Avranches, which now rivals Bayeux as our favorite place in Normandy.  Yes, I know it’s shocking that we could have a place we like as much as Bayeux, but Avranches is it.  In fact, I think it would make a good sister city for Marquette.  It has a lot of hills, a hospital, a ton of bike riders, some magnificent churches, and flowers everywhere.  In fact if there’s one thing Avranches loves, it’s flowers.

They have a HUGE memorial to General Patton right in the center of the city.  In fact, it’s called Patton Plaza, and I’ve joked before that the 52-foot monument was based on the size of Patton’s legendary ego.  But like I said, they love George Patton in Avranches.  Don’t believe me? 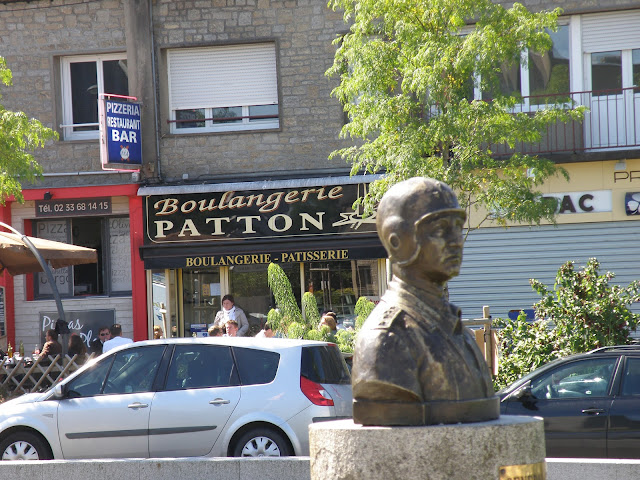 That’s a bust of Patton (in the plaza) with the Patton Boulangerie (bakery) right behind it.  What you can’t see is that next to the Boulangerie is the Patton Pizzeria, and across the street from it is the Patton Hotel.  And no, I’m not making that up.  I couldn’t make it up if I wanted to!

Like Bayeux, Avranches has one main street on which most of the businesses sit.  Unlike Bayeux, it has the remnants of a 1,000 year old castle (Avranches being founded by some dude named D’Avranches, who helped William the Conqueror conquer England in 1066), as well as an incredible public garden that overlooks the Mont Saint Michel, France’s biggest tourist attraction.  From the public garden, in fact, comes today’s flower picture! 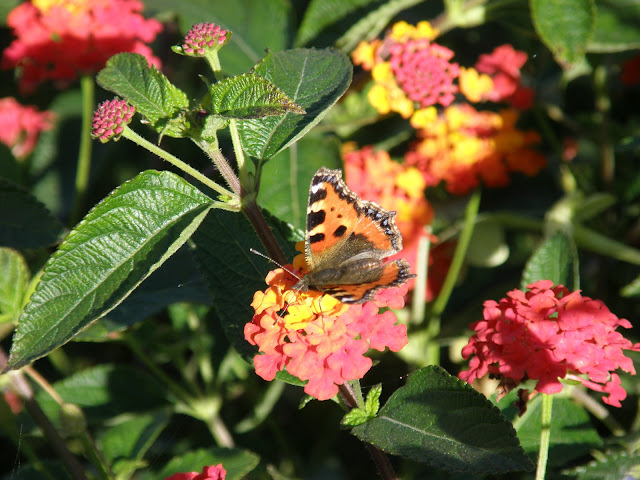 See the butterfly on the flower?  There are a zillion of them in Avranches, including this one that Loraine coaxed onto her hand— 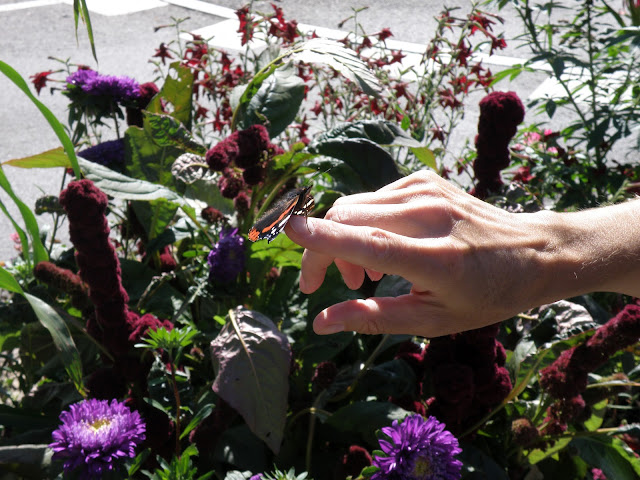 She had better luck with the butterfly than yesterday’s horses!

Anyway, Avranches is a very cool place, and if it ever does become Marquette’s French sister city, I volunteer right now to become the city’s official ambassador.  You don’t even need to twist my arm.

After Avranches we scooted a little south to visit another German war cemetery.  This one is the only war cemetery I’ve ever seen that has crypts instead of graves (almost 12,000 of them, in fact), and it has an even better view of Mont Saint Michel than you get from Avranches’ public gardens— 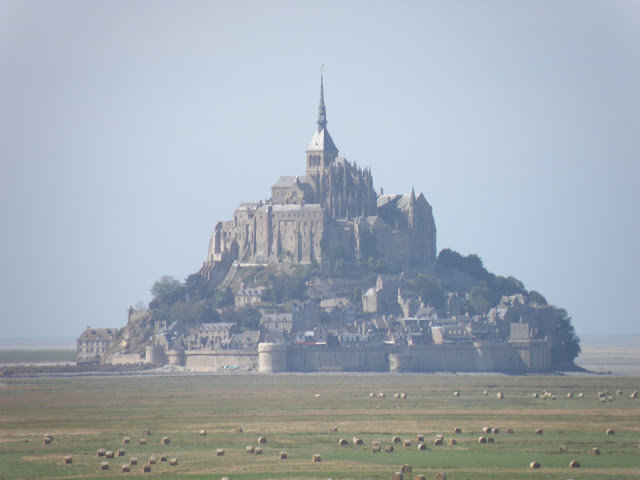 We then made our way back to Bayeux via 100 kilometers of winding roads and up & down hills that were not only fun to drive but offered breathtaking views everywhere you looked.  So for those of you who doubted we could actually take a “vacation”, guess what?  We’re actually on vacation!

Now, back to the pig.  Yes, we did buy, butcher, and eat a pig for breakfast.  Would you like to see it? 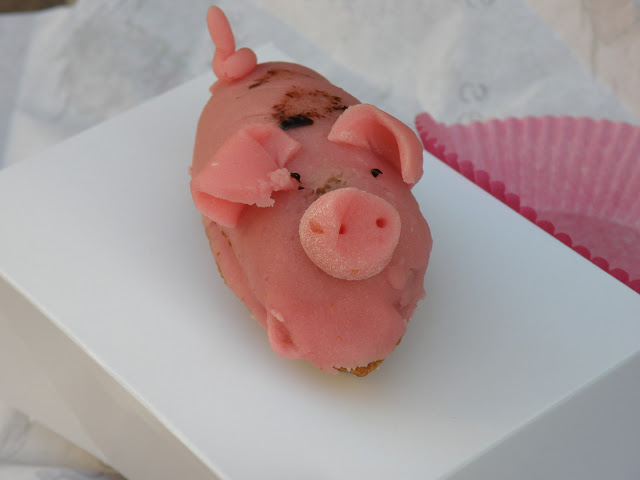 The bakers here in Bayeux do wonderful things with marzipan, and this pig is no exception.  Its body is actually made of a cake topped with a thick chocolate cream, which is then covered with a pink marzipan body, ears and curly little tail.  It tasted as good as it looked; so good, in fact, that we went back down to the bakery after we returned from Avranches to purchase another.  Sadly, though, they were sold out.

Guess we weren’t the only ones craving le cochon today.

It’s kind of hard to fathom, but tomorrow’s our last full day in Bayeux.  I can’t believe we flew out from Marquette a week ago, nor can I believe that we’ve seen almost every single thing we’ve wanted to see (and then some).  Tomorrow, we’re revisiting some old haunts, and might check out a river and the forests around it.  So until then. . .