Our last full day in Normandy took us once again from one side of the region to the other.  We started the day by driving to what’s known as the Suisse Normande; basically, it’s a park-like region of the area that some people say resembles the Swiss Alps.  And while the hills are nowhere near as big as the Alps, it was a pretty area, and we did get to drive on a narrow road with rock walls towering 20 or so meters over us.

You don’t get to do that every day.

While there we stopped at a 13th century church/graveyard in the town of St. Benin because it provided an overlook of the area.  The overlook was okay; the headstones in the cemetery, though, were something else— 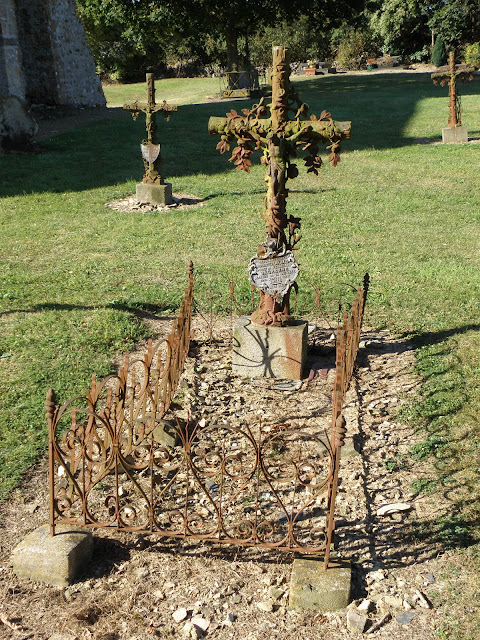 I don’t know if there was someone in the area who specialized in those types of headstones, but they were everywhere you looked.  It was kinda beautiful and kinda creepy at the same time.  I kept expecting Tim Burton and/or Johnny Depp to pop out and surprise us.

From there we went to the edge of France.  In fact, we went as far as you can go without falling off.  Now, that’s not really saying much; there are many areas of France where you can only go so far before you fall off.  But Loraine noticed on her roadmap a point of land called Pointe de Brèvands that allowed vehicular access, so we drove up, got out of out car, walked a few feet, and came to the edge of France— 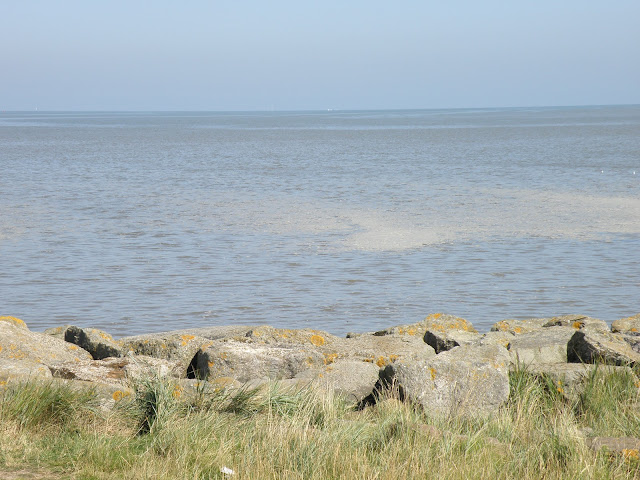 I know; kinda anti-climatic, isn’t it?  But if you kept going the next land you’d set foot on is the southern shore of Great Britain, so in a way, we really did go to the edge of France.

After a few more stops we headed back to Bayeux one last time and spent a while just wandering around.  In fact, that’s where your Bayeux beauty shot of the day comes from— 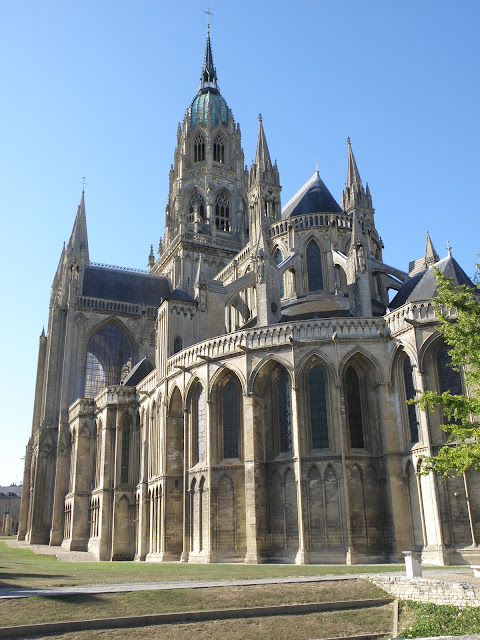 If you’ve been following along with these trip ramblings over the years you may remember that the cathedral in Bayeux was built starting in 1077 to commemorate William the Conqueror’s conquering of England.  It’s a huge building; in fact, you can see the steeples while driving on the coast seven miles away from here.  I was just at the right angle to get it all in one shot; there are very few places around here where you can do that.

Oh, we also went to Bayeux’s public gardens, where your flower shot of the day comes from— 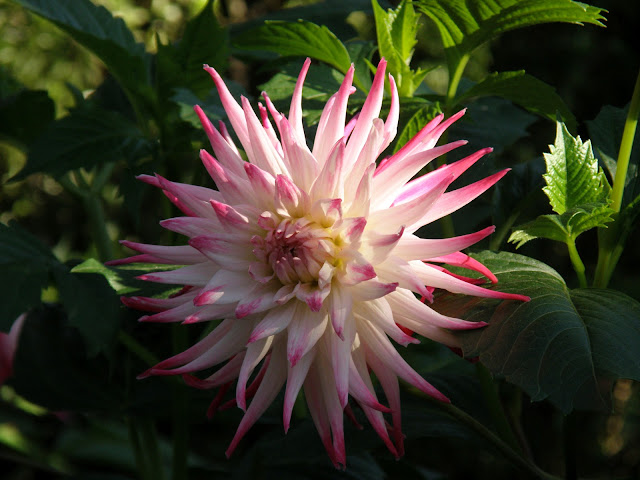 There’s also a huge tree in the middle of the gardens that was named “France’s Stately Tree of 2001”.  Yes, they give out awards like that over here; no, I don’t know why.  Anyway, the tree, a weeping beech, has gotten so large that they actually have to use cables to hold the branches up, lest the tree collapse under its own weight like a deflated meringue.  Can you see the cables? 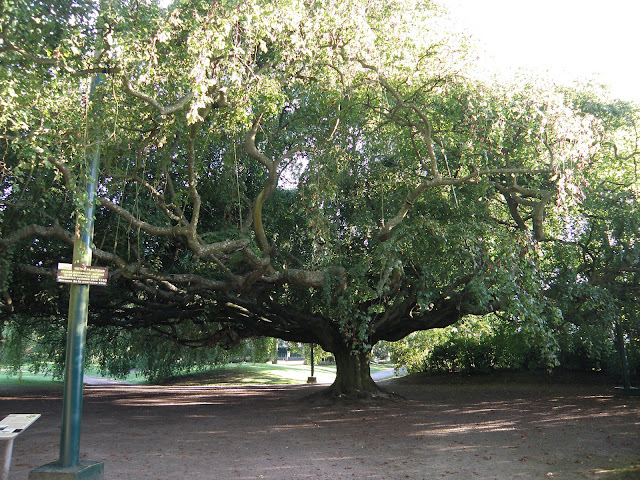 Now, onto the business of how you’ll never convince me it’s not a small world.  When we were walking back to our hotel after cruising the streets of Bayeux we noticed a bus parked in the lot.  There have been a lot of tour buses here in the week we’ve been around.  We’ve seen buses from Holland, buses from Italy, buses from Germany, buses from Great Britain, and even a bus from Sweden.  As has become our habit, we walked over to the bus to see from which country it came.  That’s when the door opened, and that’s when our friend Tony Cisneros—the gentleman we refer to as “Tony The Tour Guide” in these blogs—stepped out to greet us.  You may remember Tony; he was our guide last year in Belgium and Germany, and he’ll guide us again next year when we return to Germany.  Tony has a tour group he’s taking around battle areas, and they just happen to be in Normandy the same time we are.  In fact, he’s been reading these every day (thanks, Tony!) and wondering if he’d come across us.

Well, he can wonder no more.  And just so the whole world knows the planet is indeed a very small place— 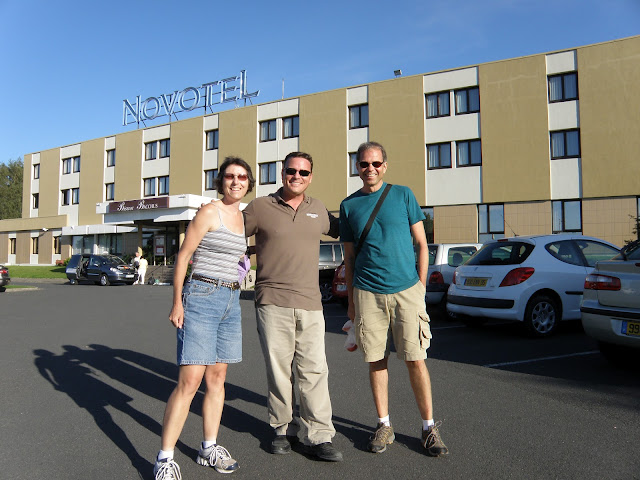 From left to right is Loraine, Tony, and some dork who snuck in the shot.  Afterwards Loraine and I could not stop marveling—nor stop laughing—at the random coincidence of it all.  It’s a small small small small world, people.  The more you see of it, the more you’re convinced of that fact.  Oh, and don’t forget—Tony’s company is called Alpventures, and you can check it out at www.alpventures.com.

Tomorrow’s both a happy & sad day; happy because we get to go to Market Day again here in Bayeux, and sad because we have to leave Bayeux, drive back to Paris, drop off the rental car, and spend a night in Roissy before flying back to Marquette on Sunday.  I can’t believe the time has gone by so quickly; it seems like we just got here yesterday, instead of a week ago.  Sigh. . .

That’s it until tomorrow.  I now have to go see if all the chocolate and cereal I bought fits into my suitcase.  If not, I may be throwing some clothes out.  And yes, I’m serious about that.  You actually think I wouldn’t be?