I’m glad to see Mr. Attard is still around.

I do not know Bayeux resident Robert Attard.  I wouldn’t know him if I saw him in the street, and I certainly could not tell him apart from any other Jean, Francois, or Henri I’d come across.  However, every time we go to Bayeux, I look to see if he’s around.  You see, Robert Attard lives just a few doors down from our hotel.  The first time we were in Bayeux in 2004 we were walking down the street when we came across Mr. Attard’s name, which I noticed because of his address on the Rue St. Patrice— 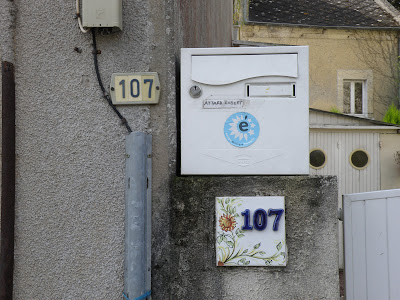 Yes, I know, I’m a dork.  But anyway, every time we’ve come back to Bayeux and take our first walk down the street, I always look at see if Mr. Attard is still living at 107 Rue St. Patrice.  I’ve thought of leaving him a business card or sending him a letter explaining why I look at his mailbox every time we visit, but some people think I’m strange enough as it is.

So I’ll leave it at that.

I’m writing this from the Paris suburb of Roissy-en-France.   We spent one last Saturday morning in Bayeux, where we went to the market and I picked up breakfast— 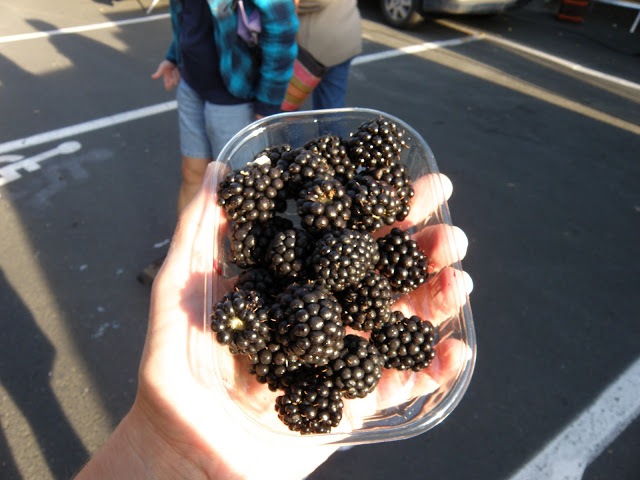 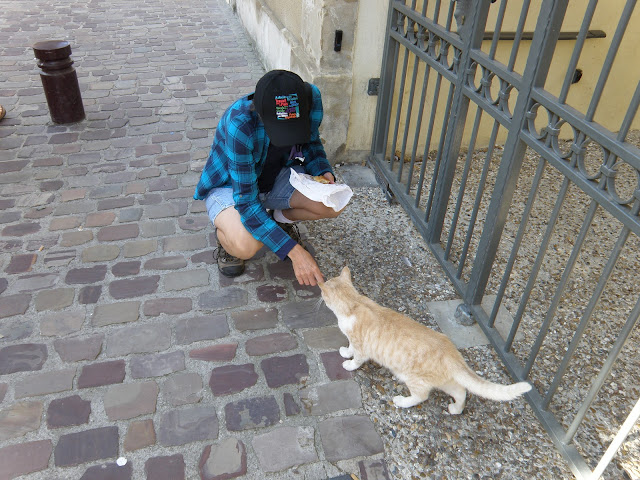 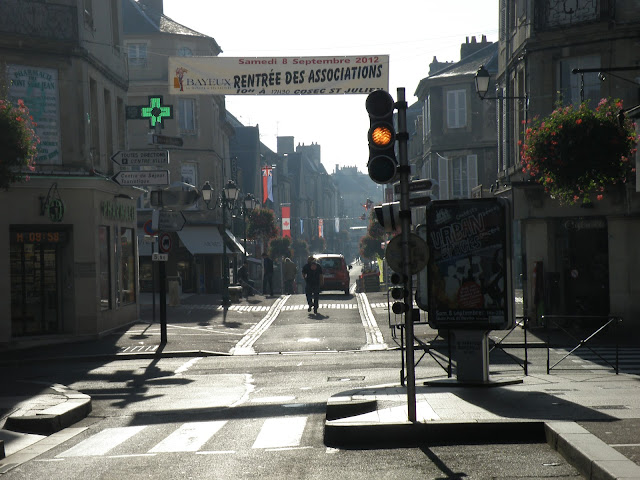 We then left and made the three hour drive through Paris to Charles de Gaulle airport, where we dropped off the rental car without a scratch (well, with nine or ten scratches, but they were all on there—and noted by Avis—before we picked it up).  We then hopped on the hotel shuttle bus to Roissy, which is why I am writing from here!!

Roissy-en-France is a unique place.  While it’s several hundred years old, the only reason it exists today is because of 5,000-some hotel rooms that ring the city (including, I might add, the one I’m writing this in).  Because of the complexity of international travel, a lot of people find themselves needing a place to stay close to the airport in order to catch an early morning flight (we among them).  And Roissy, just a few kilometers from the airport, fits that bill to a “T”.  They seem to embrace their place in the world, too.  They know that most people who visit are just here for a few hours, and so they always have this big photo display in their public gardens, which gives visitors a chance to enjoy (while jets fly overhead) a little fresh air, a lot of plants, and some very interesting photo displays— 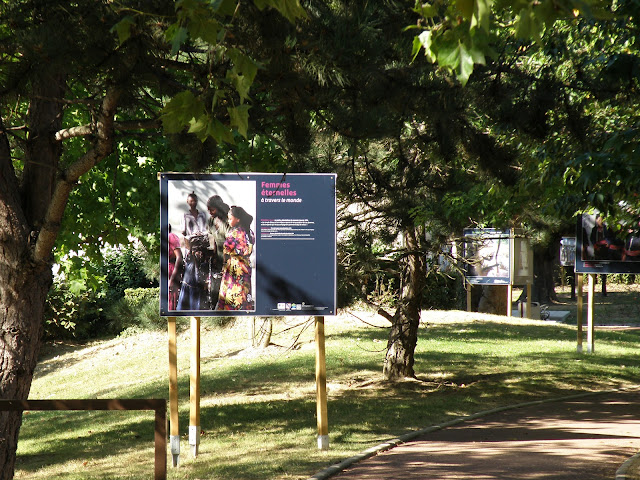 That’s one of the works from this year’s exhibitions, celebrating women of the world.  They change it up every year; my personal favorite was in 2009, when they had 80 aerial photographs of French landmarks blown up to the billboard size you see above.

Seeing as how it was 90 degrees and sunny today, after we dropped off the rental car we spent quite a while just wandering around Roissy.  We even managed to catch the tail end of a wedding! 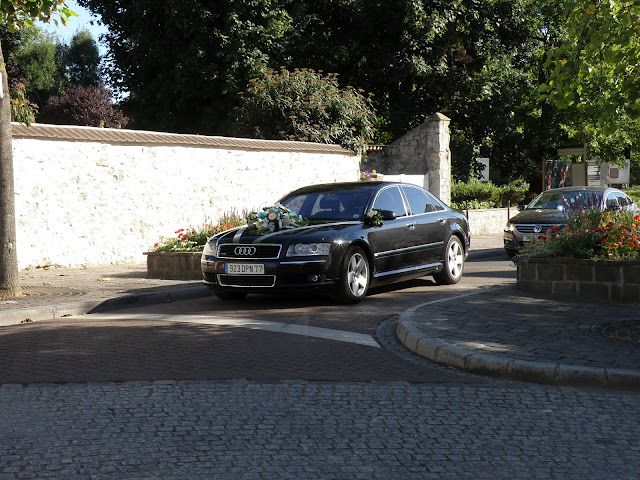 In France, they decorate the car of the bride & groom up with flowers, and then the newlyweds lead a caravan of family and friends throughout the town, honking their horns as often as possible.  The happy couple must’ve been a popular couple, as well, as their caravan was quite long and quite loud!

We also spent some of our time looking for a Renault Twingo.  Just because of the name it’s our favorite car in France; add to it the fact that it’s small and very eco-friendly and just makes it even better.  Well, after seeing hundreds of them all throughout Normandy, the only one we could find here is being used as a delivery car for the local sushi restaurant— 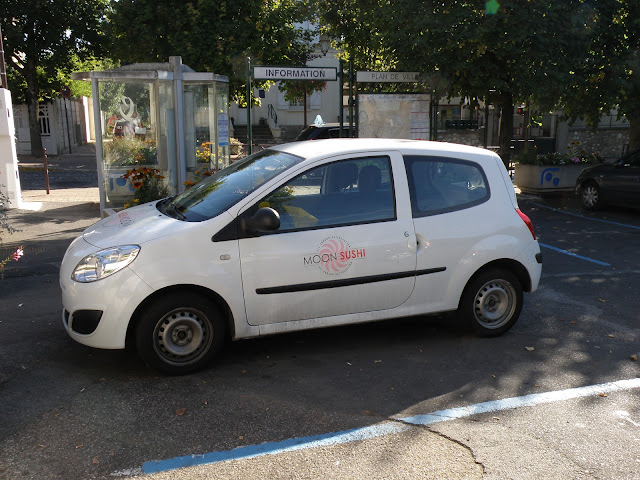 We leave Paris tomorrow around noon here, get into Chicago around 2 Central time, and then have to spend four or five hours at O’Hare waiting for our flight back to Marquette, where we should land just before 10.  If I did my math correctly—which, as we all know, is always a very iffy proposition—that means we’ll have spend approximately 16 hours from the time we head to the airport from the time we land.

Ah, the things you go through for chocolate fresh from the source.  (Speaking of chocolate, be sure to read my P.S.)

Since I have the time and the battery power, I’ll try to write another blog from the plane tomorrow and upload it from Chicago.  I have a ton of pictures I haven’t used yet, and many (hopefully) interesting things left to share.  But for one final time from France. . .

(p.s.—Okay, here’s the chocolate reference.  Because Tony the Tour Guide knows us a little too well, the first question he asked when we ran into him yesterday and he saw we were carrying a bag was, of course, “Is that your chocolate?”  No, it wasn’t.  But before we checked out today we left Tony a little “gift” at the front desk.  We hope it was yummy!)
Posted by Jim & Loraine Explore Europe at 1:26 PM