I will never understand people who ask for and/or buy a window seat on an airplane, and then just shut the blind down and never look out of it the entire flight.

What's wrong with them???

Greetings from 35 or so thousand feet above the Atlantic, where we're on our way back home after this quick journey. I'm ensconced in my usual window seat, where I could—and have—spend the entire 7 and a half hours from London to Chicago staring out the window. You start by seeing England and Ireland, then you see water for a couple of hours, followed by a quick glance of Greenland if you're lucky. Then you see nothing but barren rock, which means you're over Labrador in Canada. Soon you start to notice roads and signs of human habitation, followed by a gradual greening of the environment, and before you know it you're glancing at the Mackinaw Bridge, Lake Michigan, and the skyscrapers of downtown Chicago.

That is, you'd see them if it wasn't cloudy out, like it is today. Or if the flight attendants didn't electronically darken the windows, like they can on this 787, for a few hours.

Our layover in London wasn't too bad this time. I think we only had an hour and a half before we could board the Chicago flight, which is nothing compared to a four or five hour wait that we've had to endure in the past. I don't know if you've ever had the pleasure of spending time at Heathrow, which I've lovingly referred to in the past as a “seething pit of humanity”. There are people everywhere, all crammed into small spaces and all talking on their phones or dealing with their screaming kids at the same time. Over the past few trips Loraine and I have developed a plan—we stop at a H.W. Smith shop, pick up one of their sandwich specials (including Dr. Pepper with real sugar!) and a few pieces of chocolate, then find the corner that's farthest away from people. Depending upon which building you're in it actually can work quite well; this time, we were in Terminal 3, so it wasn't as peaceful as it could've been, but like I said, it was relatively short this time around.

And that's always a good thing.

The sandwich deal you get at the Smith shops also includes a drink (the aforementioned Dr. Pepper) and a bag of chips, or crisps, as they're called in England. I don't know why, but over the past few trips I've developed a bizarre fascination with this flavor-- 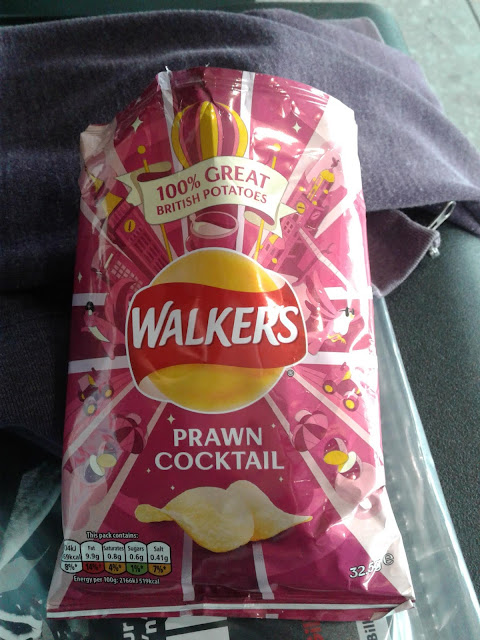 What. You haven't had shrimp-flavored potato chips before? Then don't judge. Besides, they almost (almost) taste like shrimp.

It's election season yet again in Germany, this time for seats in the European Parliament, and this means you can see election signs on almost every lamp post. 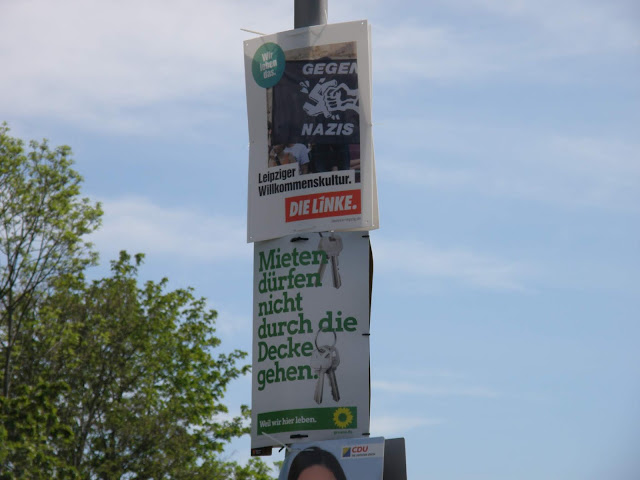 These are for the Green Party and Die Linke, which translates into “The Left”, two of the up and coming parties of the country. When they held national elections last year and the AfD, the “Make Germany German Again” party, won 12% of the vote, the news media went ape over it. What they didn't mention is that both the Green and Die Linke parties combined for almost 30% of the vote, which was almost as much (if not more) than the two “traditional” parties (the equivalent of our Democratic and Republican parties) For the rise in nationalist parties (like the AfD) around Europe, in some countries like Germany left-wing parties have had even more success.

It just doesn't get reported in the media as much as a party that wants to kick out anyone in Germany who doesn't look like a German. And we all know happened the last time someone wanted to do that. But the groups that are being targeted by prejudice are fighting back, with information tables set up. 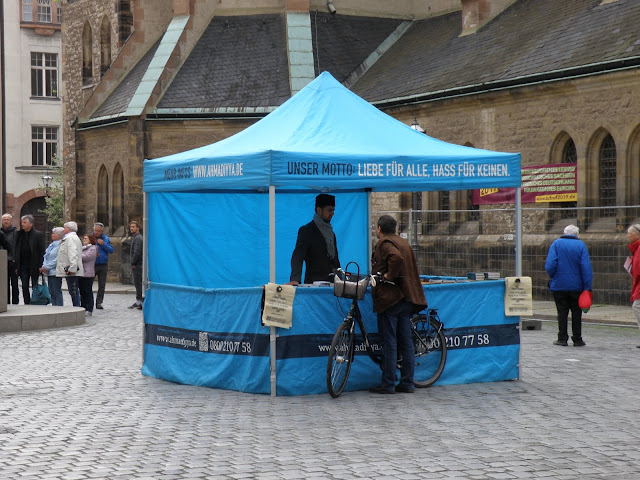 The thought behind it is this—you speak with someone in a targeted ethnic group—in this case, Muslims—and you (hopefully) go away with an understanding that people are just people, and that the hate spewed by certain political groups is unjustified and, in many cases, completely fabricated. It seems to be working, as parties supporting a diverse Germany are far outpacing those who want a white Germany.

Except, perhaps, in media coverage.

Speaking of things that could be considered uniquely German, how about this sight, repeated each and every morning we were in Leipzig? 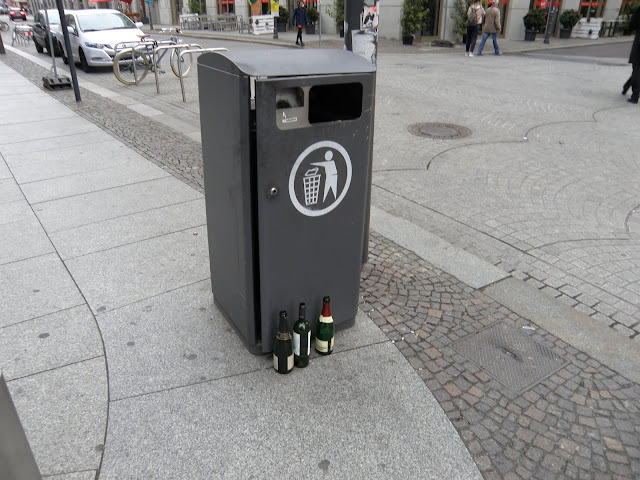 Germans are big on recycling, and even when walking drunk down the street will remember to put their empties to the side so they can be picked up and reused.

Although it's not our scene Leipzig is big on both Goth and Punk culture. In fact, you can even see a punk rock mom on occasion-- 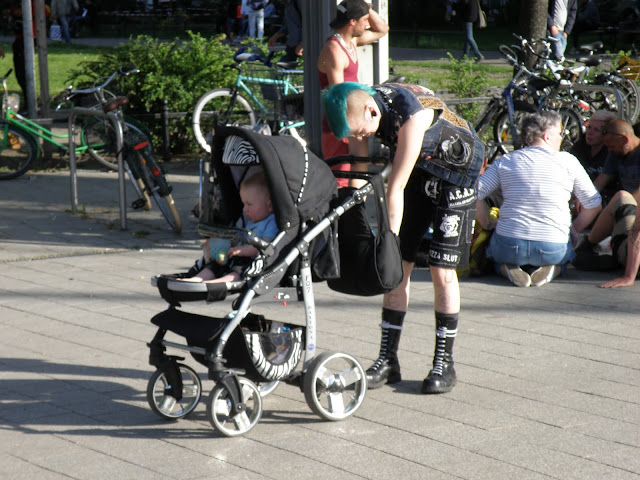 The city also hold the world's largest Goth festival each June, as thousands of black-clad young people descend upon the city in celebration of their lifestyle. It probably accounts for the large amounts of tattoo and piercing parlors throughout the city as well. Those are just a few of the things that make Leipzig a unique and fascinating place.

I can't wait to go back again.

Okay...a few totally random pictures I took and haven't had a reason to post-- 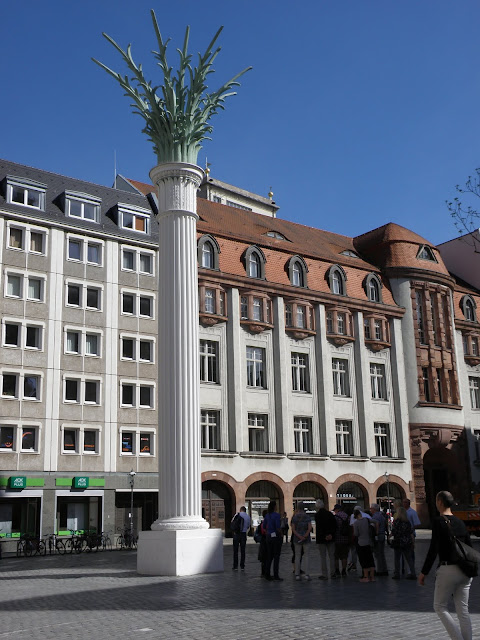 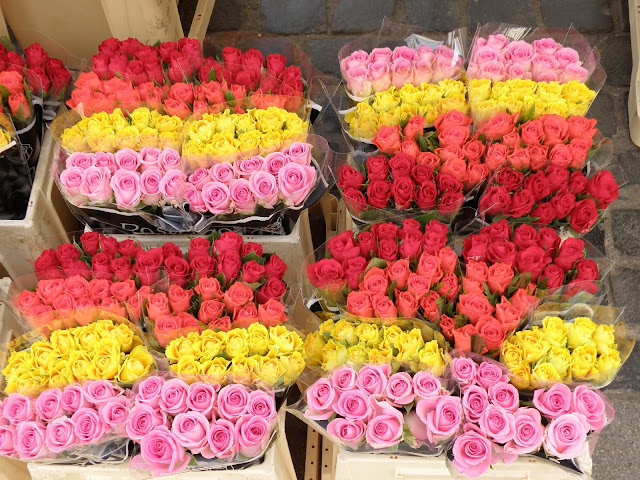 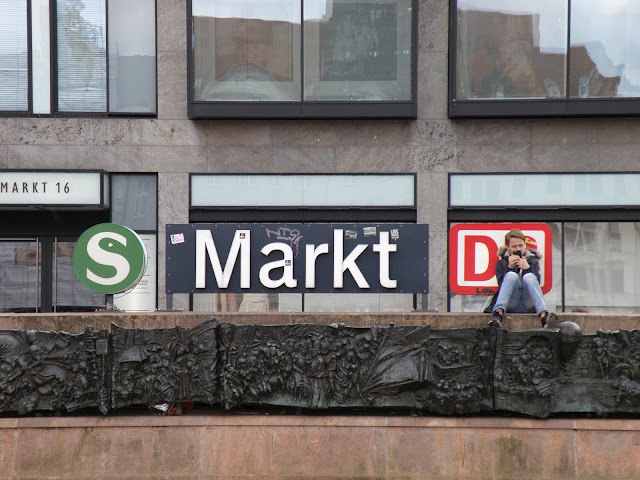 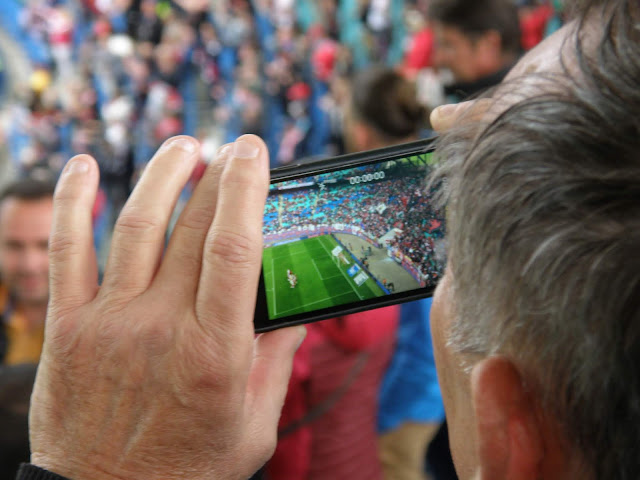 I actually don't think you can take a bad picture in either Leipzig or Berlin. I really don't. Even if you're just looking for a totally gratuitous shot of lilacs-- 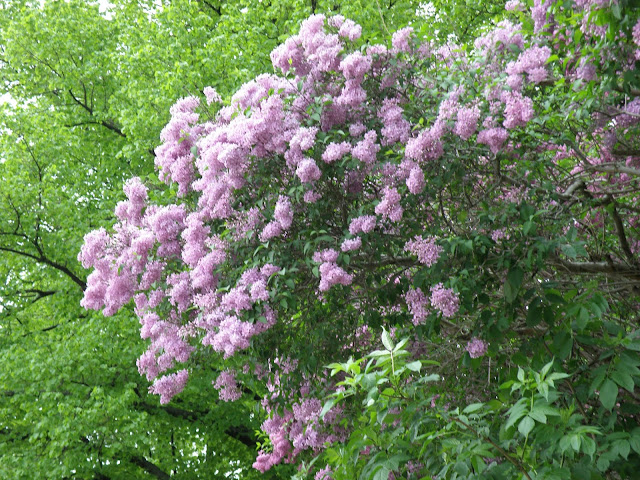 The lilacs that have been bursting forth while we were here were an unexpected bonus. And really, appreciated, too. I can't wait for ours to come out in a month at home!

And, of course, because this was an urban trip we didn't get the chance to see any cows, which was a big bummer. Well, I shouldn't say we didn't get to see ANY, as I saw a herd out of the window of the train on the way to Berlin yesterday (and no, they didn't stop the train so I could get out and take pictures). And then we did see one other cow-- 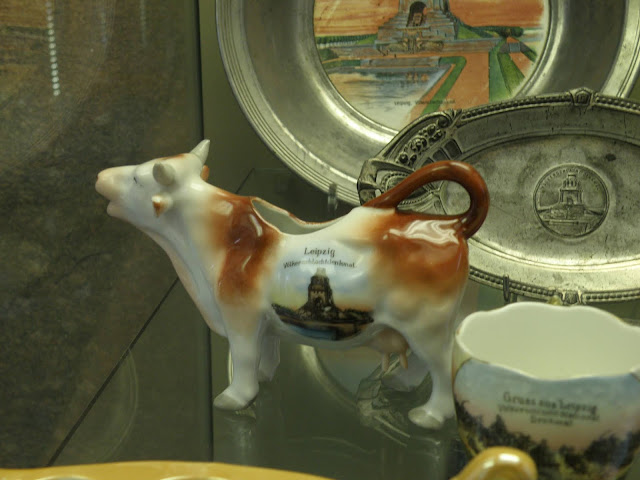 It's a pity we didn't have more time and, perhaps, a rental car in Berlin. Readers of my daily blog for work will recall that I took an Ancestry DNA test last summer, and found out that the Schwemin side of my family was Prussian, After a little research on my part I discovered that they lived in a small village only 60 or 70 kilometers north of Berlin. Back then it was part of Prussia/Germany; after World War II the area was given to Poland. It's a small place; if you look at it on Google Earth it now appears to have five or six houses in it. Still, it would've been neat to at least drive through, and see where my great-great grandfather lived before moving to the U.S.

Oh well. Yet another reason to come back, right?

Speaking of family, here's Mallory's picture for this year-- 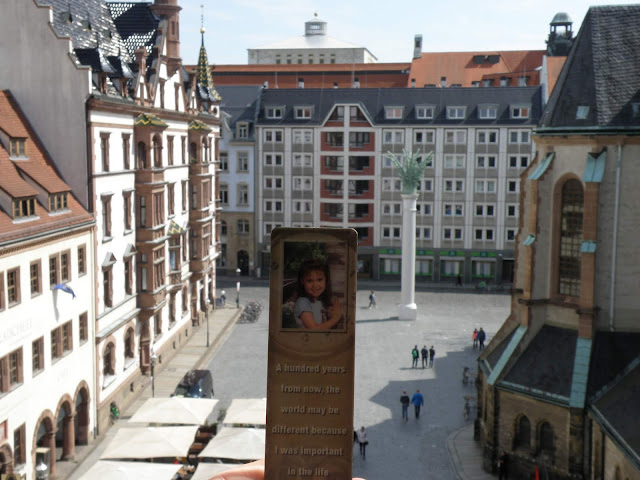 I think by now you all know the story behind this, so I won't explain it yet again. This year, she has the historic St. Nicholas church courtyard, where all those protests in Leipzig took place, as the background.

Hope you enjoy it, Mallory!

With the exception of not being able to see RB Leipzig practice this past Sunday the trip has met (or exceeded) all of our expectations, and the credit for that has to go to trip planner extraordinaire, the Most Amazing Woman in the World, Loraine. She puts in countless hours of studying, planning, and worry to make sure we get the most out of every jaunt we take, and she did her usual amazing job this time.

So thanks, The Most Amazing Woman in the World. I don't know anyone else I'd like to travel down back alleys, on trams, and into soccer stadiums with but you!

That's about it for this time. Unlike previous expeditions we don't have a “next trip” planned yet, although there are several ideas percolating around our heads (the train travel we so enjoyed the past week has really made us think). So until next trip—whenever and wherever that may be—thanks for following along. We ope you enjoyed traveling along virtually as much as we did in person!