Look. I made a new friend today! 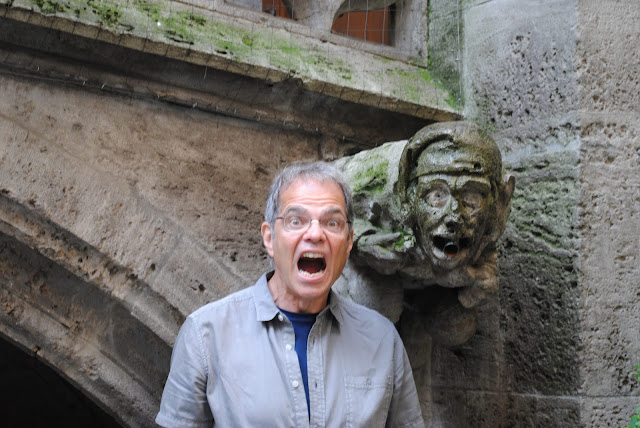 Greetings from the NH Munchen Flughafen hotel, where we are spending our last night on German soil before heading home really, really early tomorrow morning. How early? Well, we'll probably wake up just after 4am here, so we can get a ready to go for our first flight of the day at 730. To give you a little perspective, we'll be waking up around 10 pm Saturday night in Marquette. Our flight to Sawyer gets in just before 9 pm Sunday night.

Yup. We land 23 hours after we wake up for the day. It'll be glorious.

We did two things today. The first was to return to the Residenz Palace in Munich, the first place we visited on this epic journey. The reason for going back was that we didn't get there until late in the afternoon of the day we arrived, and they were already closing off parts of the exhibits. We just didn't know how much we missed. As it turns out, they had closed almost 60% of the stuff we were supposed to see, so it's a good thing we went back. I mean, mostly it was to check out rooms this this-- 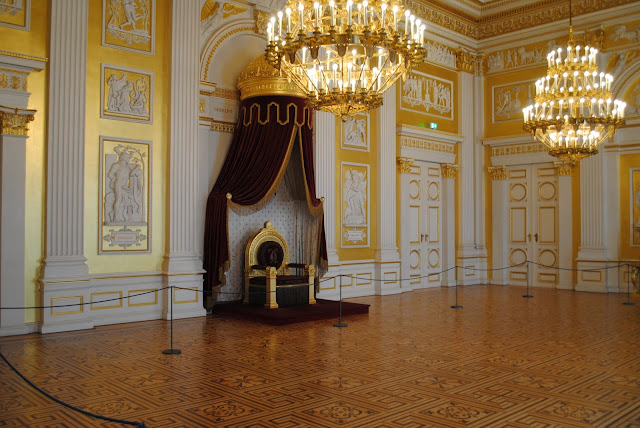 That's the throne room for Ludwig's randy grandfather Ludwig I, who you may remember from yesterday's blog as the guy who liked women a lot. We also checked out the rebuilt chapel (bombed during World War II) where Ludwig II was formally crowned. But perhaps the most stunning thing in the complex was the Residenz Theater, where Ludwig II would go and watch the operas that he loved so much and that made up such a large part of his life-- 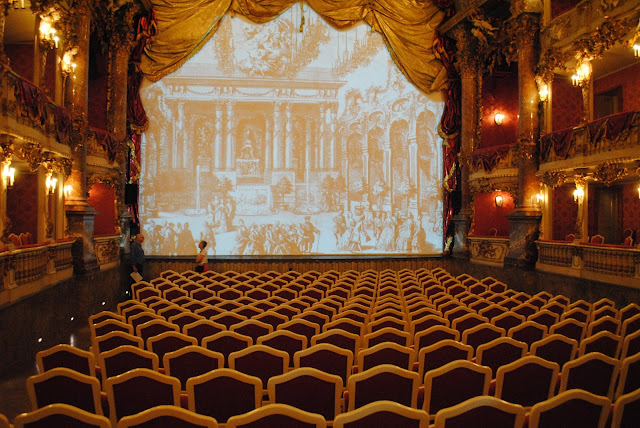 His friend Richard Wagner, the guy who wrote “Ride of the Valkyries” as part of his “Ring” trilogy (thus enabling everyone in pop culture from Bugs Bunny to “Apocalypse Now” to steal it), would often put on productions at the theater. Ludwig would attend, sitting in his royal box-- 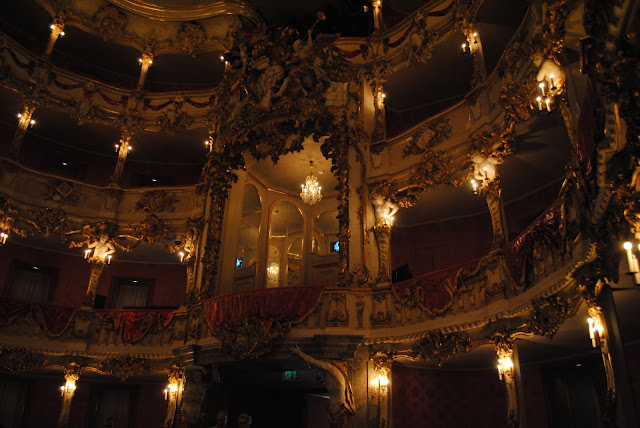 That would change over the years, though, as the people who went to the show would not watch what was happening on stage. Instead, because the lights were left on during the performance, they'd turn around and focus their opera glasses on the shy king, who then became quite aware that hundreds of magnified eyes were staring at him. That was something he did not like. Eventually, he built a theater into his Neuschwanstein castle and had productions put on there for an audience of one—him.

At least that way, no one would be staring at him.

Our other stop today was one of the great municipal parks on the planet, the Englisher Garten (English Garden)-- 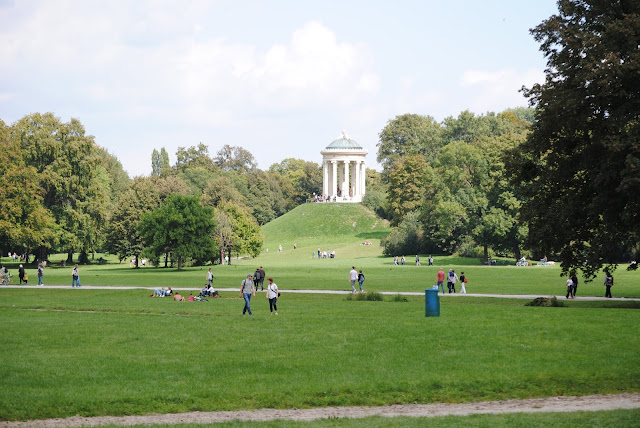 The park was started by one of Ludwig's predecessors, who took the old royal hunting grounds and turned it into a park for everyone to enjoy. In true Bavarian style it has a Beer Garden-- 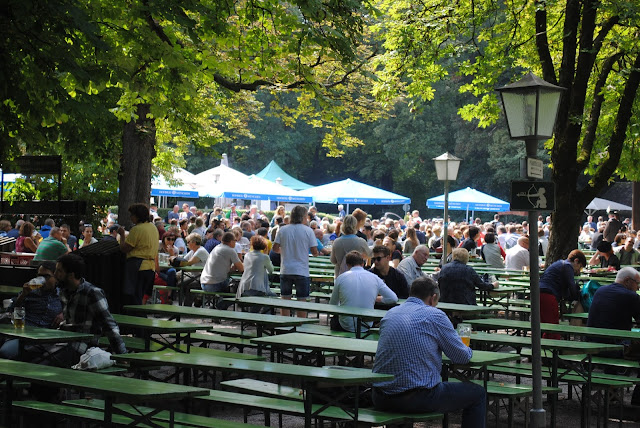 And in non-traditional Bavarian style you can also see people playing cricket in it. 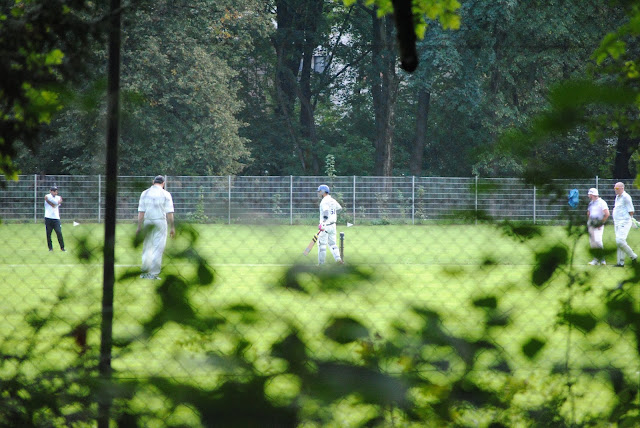 But perhaps the most unique thing about the park is the surfing. Yes, surfing, in a city park thousands of kilometers away from the nearest ocean. Don't believe me? 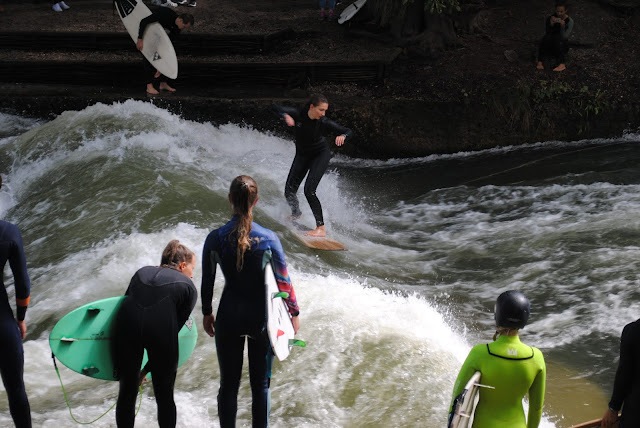 I wouldn't lie to you, would I? What happens is this—there's a river running through the park, and where it goes under a bridge the surfers (and the city) have constructed a series of walls that force the river into a narrow path, causing it to rush through the bridge and kick up some rather mean rapids. The surfers wait on either side of the river. One jumps in and rides the current as long as she or he can, and then the next person takes their turn. There are dozens of surfers at any one time, and hundreds of spectators watching them, cameras and phones in hand.

It's quite the spectacle. And not something you'd expect in a city park.

That's about it for today. What else do I have to share? Well, how about a statue of a guy strangling a wild boar with his hands-- 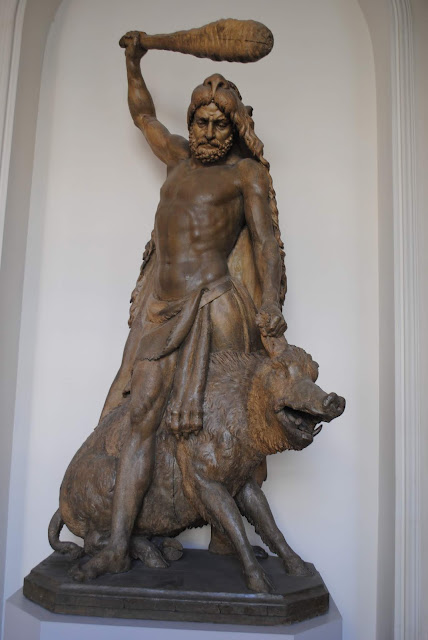 Cows in the middle of Munich-- 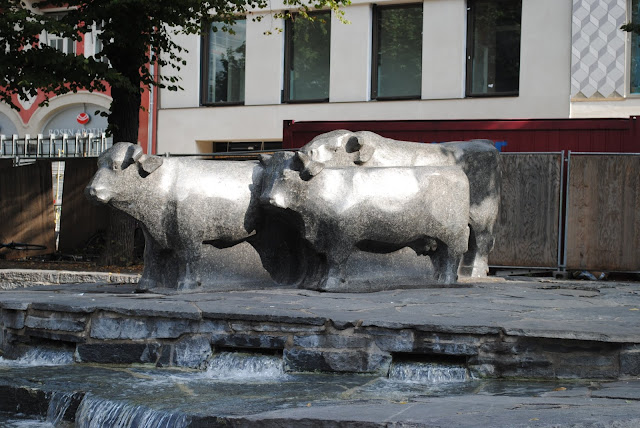 Well, okay, they're not REAL cows, but they were still cows in the middle of Munich.

And we saw this-- 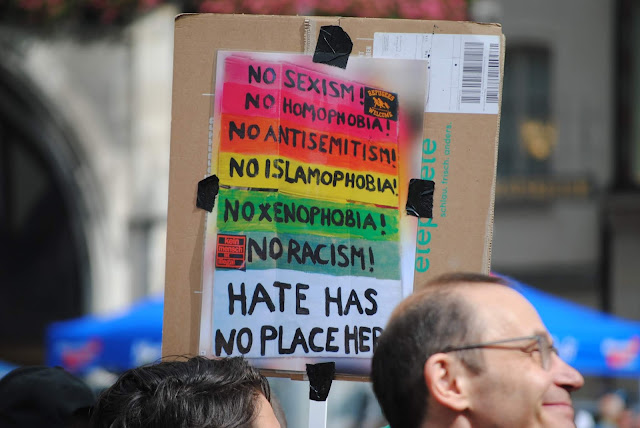 Germany has been rocked the past several days by neo-Nazi rallies in the eastern city of Chemnitz, similar to what we went through in Charlottesville last year. So across the country today rallies were held to show that most Germans are tolerant and loving people, much like rallies were held in places like Marquette to show that most Americans are tolerant and loving people.

While our trip is almost over, these blogs aren't. I'll be spending a LOT of time in airplanes and airports tomorrow, so you'll get another one of these with all the stuff I didn't get to. That should include (but is not limited to) the legend behind Berchtesgaden's iconic Watzmann peak, how German elections (coming up next month) are held, and how I may have been slightly mistaken a week ago when talking about a giant killer swan.

Oh, and I'll have my niece Mallory's annual picture (and the story behind it), as well.

Well, 4 am comes way too soon when you're...heck, 4 am comes soon no matter what you're doing. So with that in mind...