I'm thinking that after just one day we've gotten our money's worth out of our new rain jackets.

Greetings once again from Fussen,where it did nothing but rain again today. And I'm not talking a gentle little mist or the delicate pitter-patter of a few drops here & there. Nope: I'm talking full on downpour almost from the moment we woke up until the time I type this a whole bunch of hours later. In fact, the German national Weather Service says over two and a half inches of rain has fallen. And it's still only 5 pm right now, so who knows what the total will be before the day is through. Before we came over, we both bought some high-tech rain jackets from Getz's for the hike we have planned for Sunday, a hike that will take us up a gorge with a big waterfall in it. Little did we know that they would actually come in handy for several straight days before we actually planned on using them.

Oh well. At least the rain is supposed to end, with any luck, some time tomorrow. So if you have an “in” with Mother Nature, can you put in a good word for us? Thanks in advance.

I'm actually writing this a whole lot earlier than usual, and it won't contain all of our day's activities. Why, you ask? Well, I answer, because of this-- 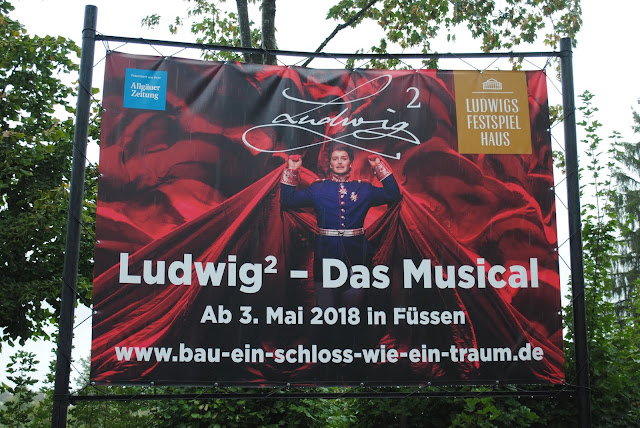 That's right—we're getting dressed up & going to the theater tonight, to see a musical based on the life of the slightly uncommon King Ludwig II. Sure, the show's all in German, and sure, we'll have no idea what's going on, but we're going out to see some thee-ah-tur with a thousand of our closest friends. And Loraine's already folded the tickets exactly the instructions said, so with any luck, they'll actually let us in.

Come back tomorrow to find out if they did.

Our big task for today was the tour of Ludwig's castle masterpiece, Neuschwanstein. This is the world famous castle, the fairy tale castle, the one that was the inspiration for the Cinderella castle at Disney, the one with all the hype. And I have to admit something—it didn't disappoint. You're not allowed to take pictures in there, but I'm sure if you Google “Neuschwanstein” and then find interior pictures you can see for yourself what I'm talking about.

The most magical part of the day, though, occurred even before the tour began. There's a pedestrian bridge across a gorge near the castle, and if you walk the hill up to it and then onto the bridge, you're supposed to see the castle in all of its glory. Well, between the rain & the fog, when we got there this is what we saw-- 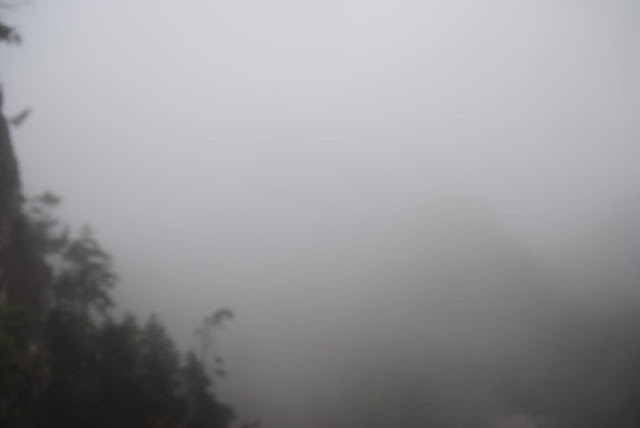 It was a disappointment, not only to us but to the other dozen or so other couples & families who had walked up there to see the castle. As we were standing there, wondering if there was anything else to see, I started listening to the dozen other couples & families, all speaking different languages. You could hear German, French, Mandarin, Russian, Spanish, and a bunch I didn't even recognize, but all probably saying some variant of what we were saying.

Then, if by magic, the wind picked up & started blowing the fog away. Soon, you could see this-- 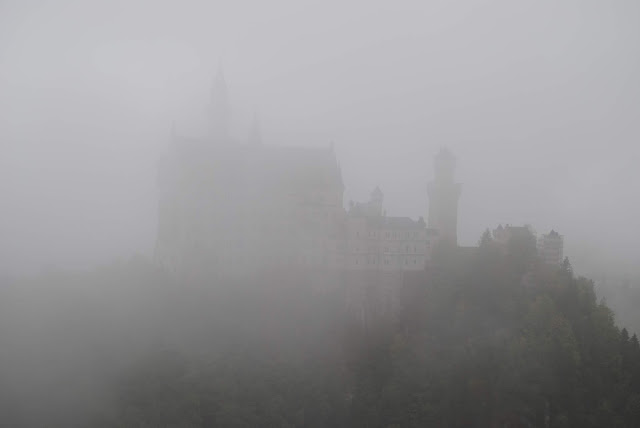 And then, finally, as if Ludwig himself had decreed it, you saw this-- 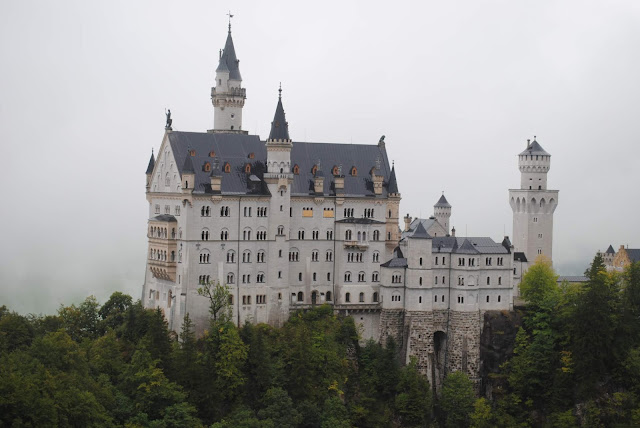 And those dozen different couples & families, all of whom had been speaking a dozen different languages just seconds before, all of a sudden found they had at least one word in common--

“Eeeee”, shouted in delight and almost in unison as the castle finally pulled back its curtain of fog.

Even an overly sarcastic smart aleck like me had to admit it was kind of a cool moment.

Since the fog had lifted momentarily, we tried to recreate one of Loraine's favorite pictures of her favorite king, this one-- 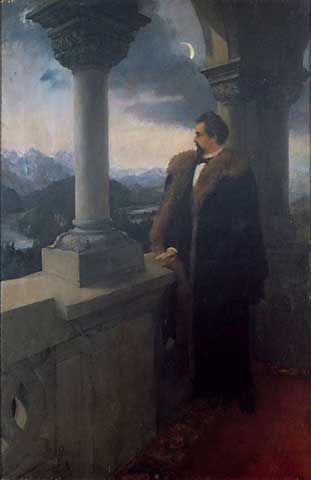 We came up with this-- 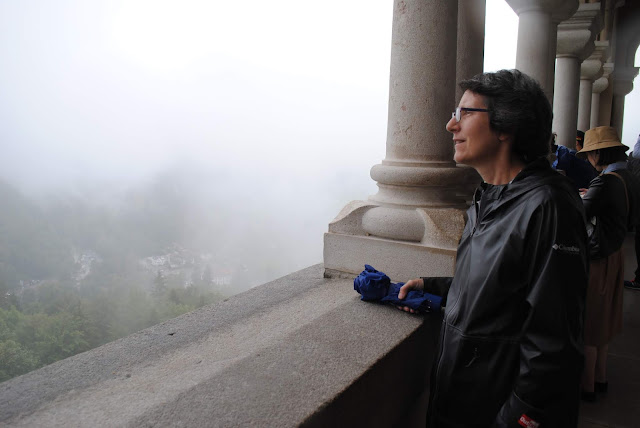 which I know isn't an exact copy but I didn't have the original as reference. I'll do better next time. I promise.

The other thing we had hoped to do today was climb up a hill right outside of Fussen called the Kalvarienberg (Calvary Hill), which is supposed to have a great view of the town. But with a rainy & slippery climb like this ahead of us-- 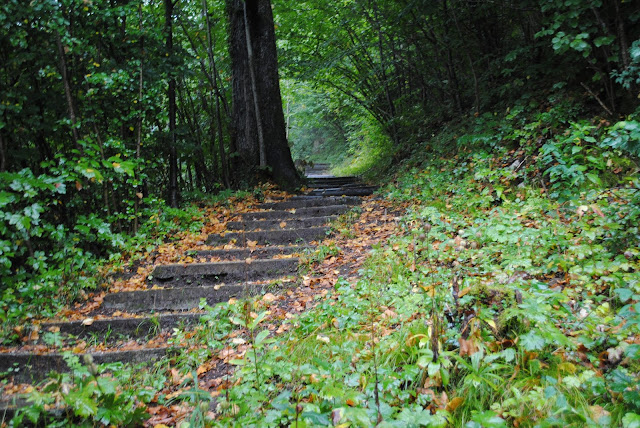 we decided that being responsible adults was the prudent thing to do, and gave up. After all, we have theater tickets tonight, and would much rather be there than in an emergency room in Fussen.

That's about all I have time to write today. You'll get full details on the theatrical experience tomorrow, along with the story of King Ludwig's very mysterious death. Oh—and you'll find out if it ever stopped raining, too.