If I don’t see another example of two lanes getting cut down to one because of road construction any time soon, that’ll be fine with me.

We were scheduled to do a lot of driving in Belgium today, and we did a lot of driving in Belgium today.  In fact, we probably did a little more than we planned to, as (it seemed) every few miles there were detours because of road construction, or long waits while traffic going one direction on a suddenly one lane road stopped those of us heading in the other direction on the suddenly one lane road.  Now, don’t get me wrong.  I’m all for road construction & repairs.  After all, I live in Michigan, where a road hasn’t been fixed since the early 1900s.  But when you have to go kilometers out of your way to get somewhere, or you find yourself going in the totally opposite direction from which you intended...

We actually did get to a lot of nice things today.  Loraine wanted to spend the day exploring the areas of the Ardennes where many interesting World War II figures came and went, and we did that.  And by doing so, we were able to visit a lot of nice little Belgian towns with names like Spa and Rachamps and Stoumont.  In fact, here’s Loraine in Stoumont, where their police station flies the flags of the Belgium, the E.U., and the 82nd Airborne! 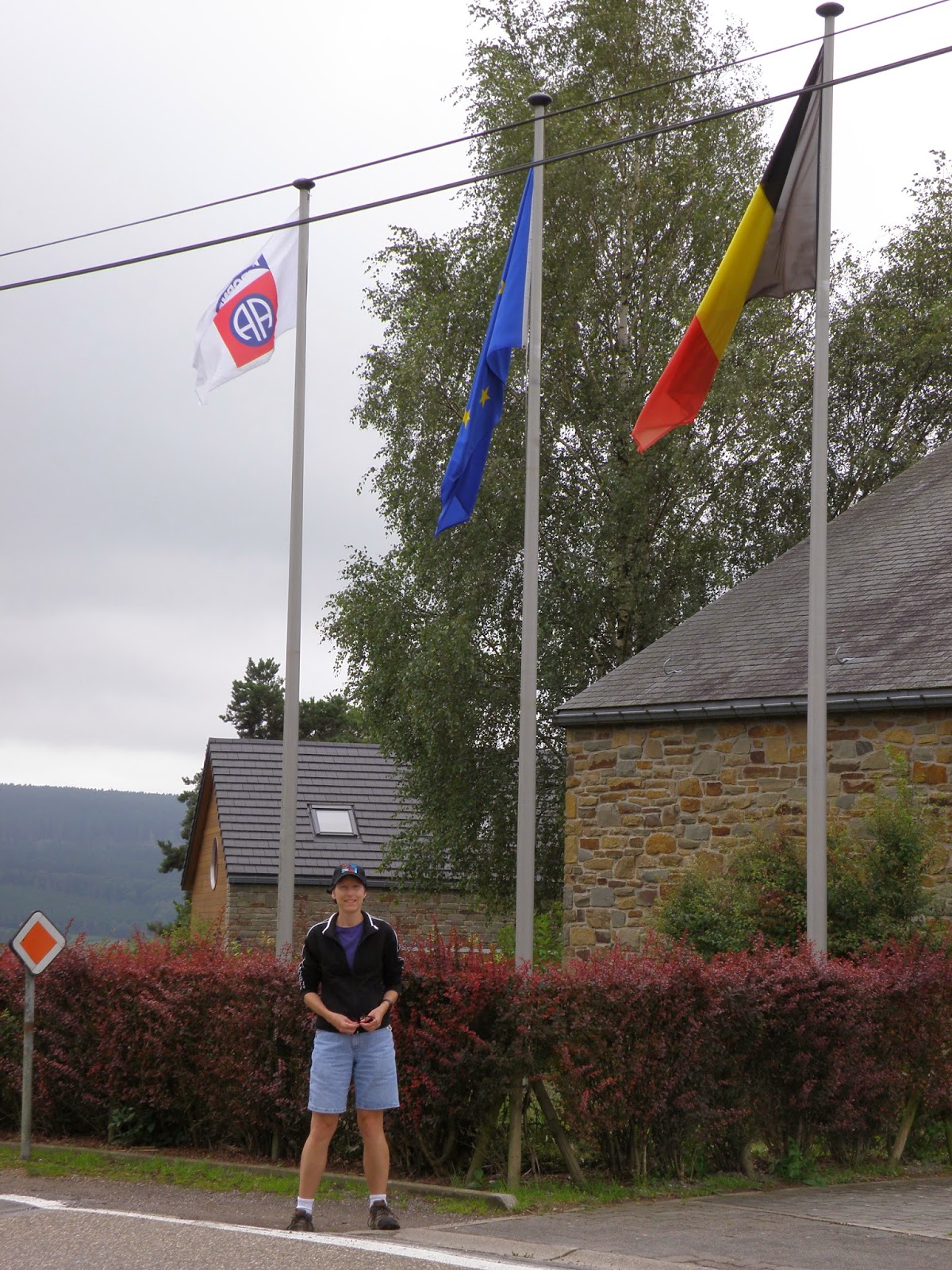 Two of the towns, though, rate a little mention, and those would be Malmedy and Eupen.

Malmedy was a place we had quickly visited before and that I wanted to explore a little further.  It’s about half the size of Marquette, and one of those places where there is a TON of road construction going on.  Here’s what it looks like (on one of the few streets that wasn’t being repaired)— 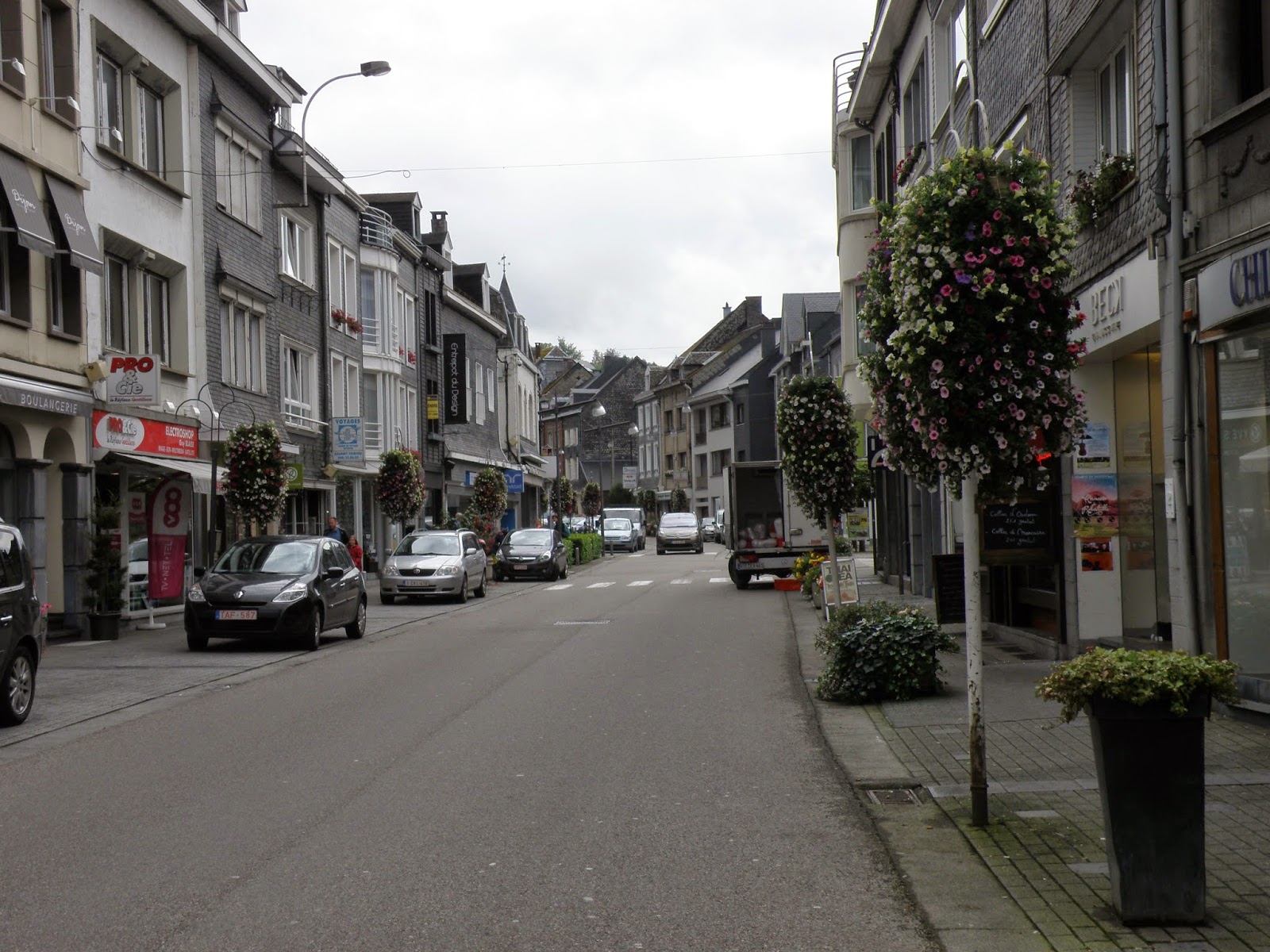 Actually, in both population and the way it’s laid out it’s faintly reminiscent of Bayeux, our usual home in Normandy.  If you recall, we had planned on renewing our vows in Normandy this year, but that didn’t work out.  If it had, it might’ve looked a little like this— 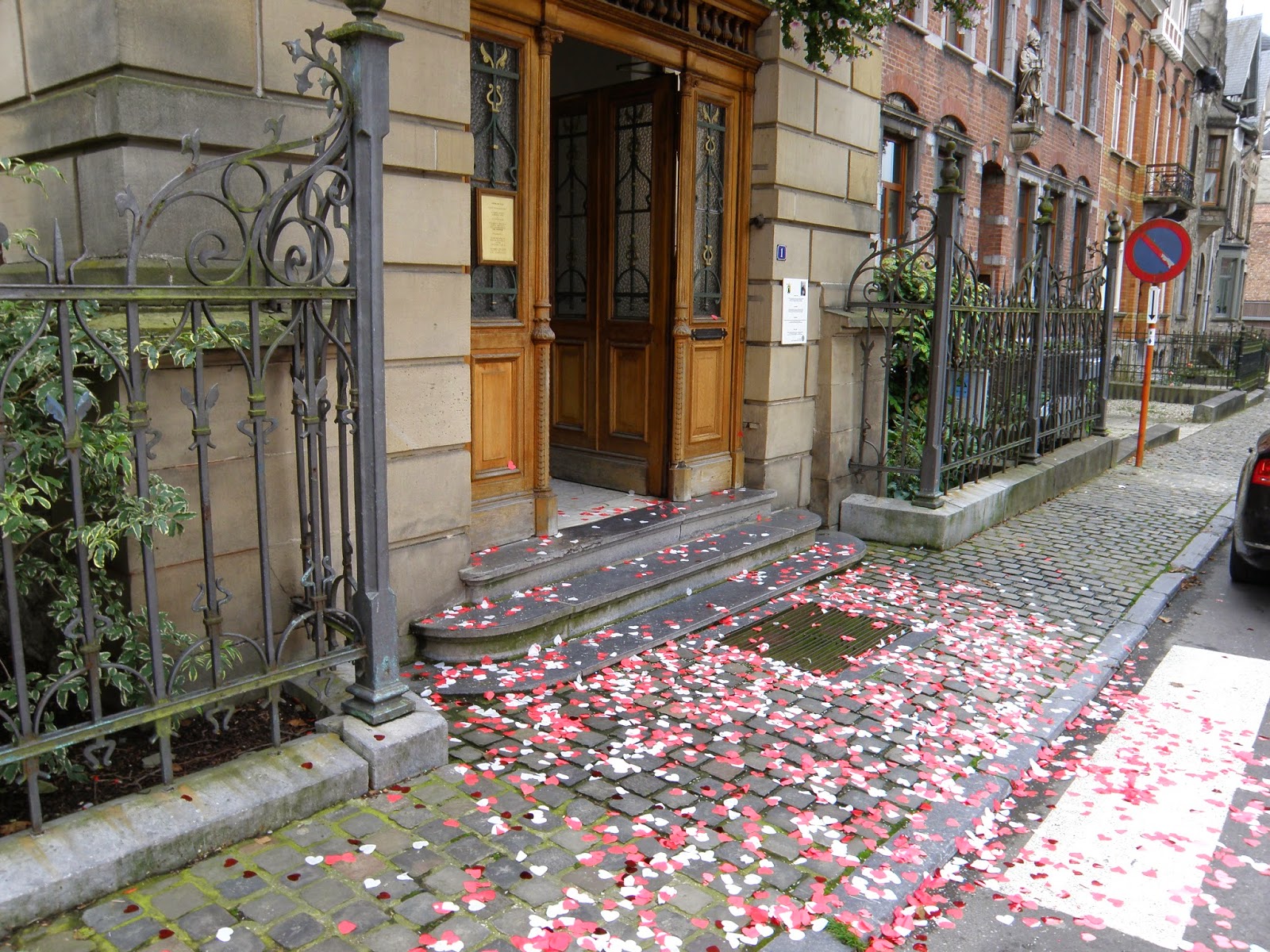 This is the city hall of Malmedy, where a wedding had just taken place.  See all the stuff laying on the ground outside the door?  Those are red and silver paper hearts that everyone threw at the bride & groom (instead of rice).  So since we couldn’t get married again, we walked through the hearts.

I guess that’s the closest we’ll come this year.

The other thing we did in Malmedy?  We stopped at a bakery! 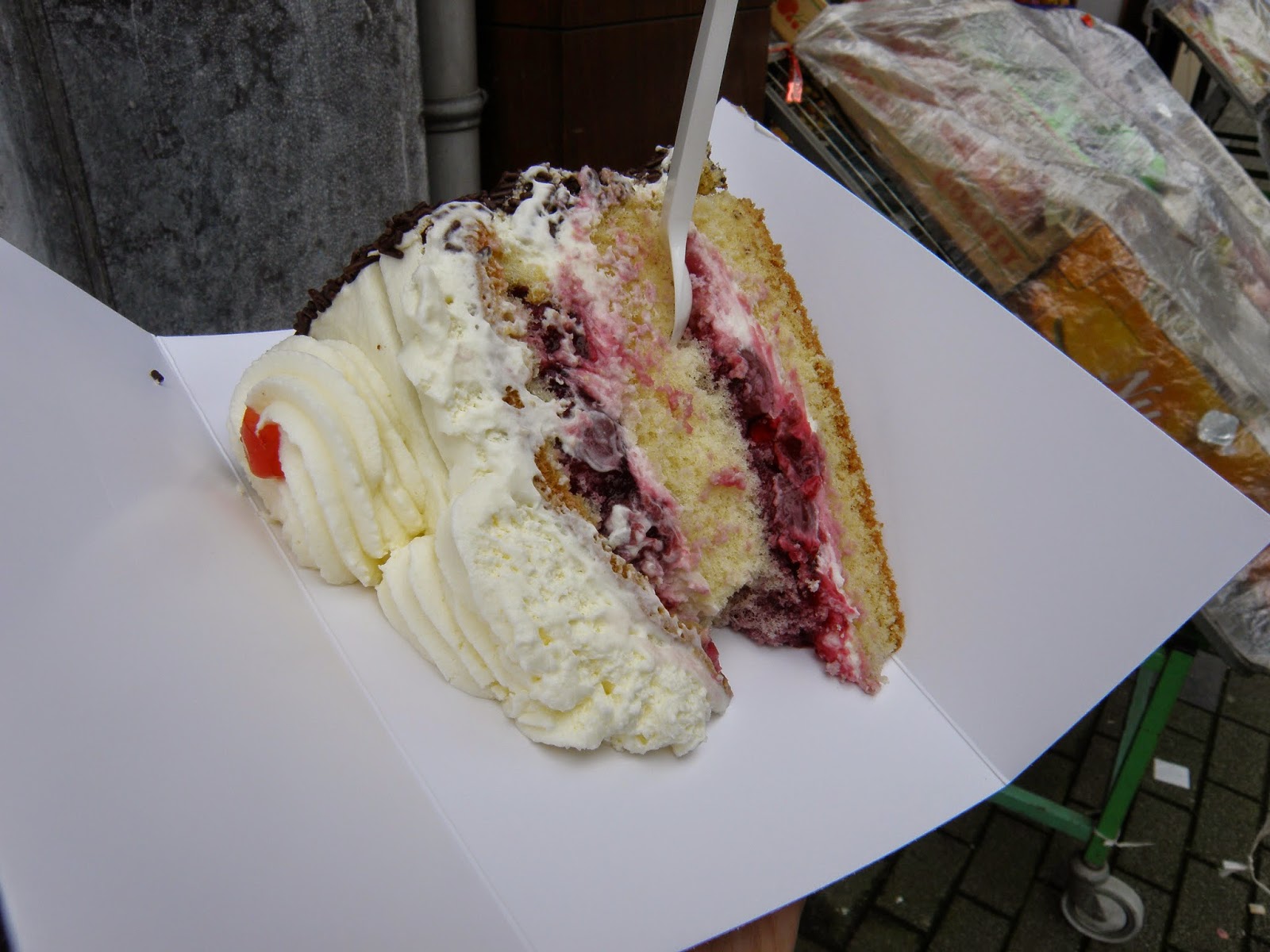 While Loraine was munching on a piece of rhubarb cake, I had a piece of triple layer cherry cake with a real whipped cream frosting.  The thing (pictured above) was bigger than my hand, and only cost one euro and 70 cents (about $3 American).  Gemma from Gophers—if you’re reading this, I know what you can try making some day!! 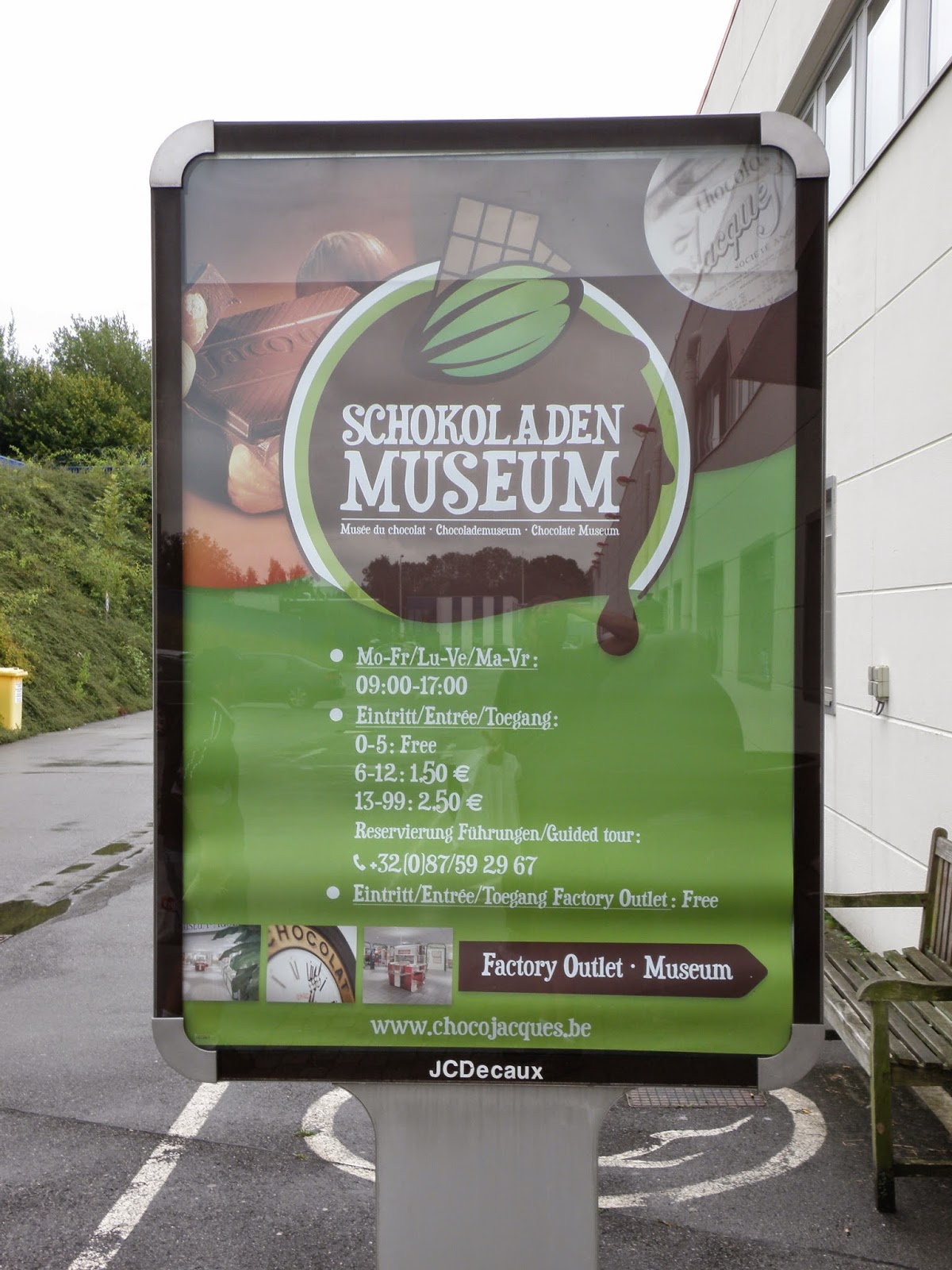 This is the sign to the Jacques Chocolate museum and factory outlet store, right on the grounds of the Jacques Chocolate factory.  It was an amazing place inside, filled with rows and walls and displays of chocolate of every kind.  Our jaws dropped when we saw something else, too.  Normally, a big bar that would cost 6 or 7 dollars was being sold for (gulp) a Euro and a half.

That’s when we realized that we had a problem.  No, not a “problem” with us being addicted to chocolate.  The problem we realized we had was that we forgot to bring an extra suitcase with which to bring home our chocolate.

However, because of all of our driving we didn’t get to spend as much time as we would’ve wanted in places like Eupen and Spa, places that looked like we should further explore.  And if we ever DO come back, we’ll know to bring the extra luggage.  In fact, Loraine’s already realized that when we travel she puts everything in her backpack, which means she only has one carry on.  And since on airlines you can bring a carry-on AND a personal item, and her backpack is technically a “personal item”, we’re already scoping out something along the lines of a hard-shelled mini carry on.

You know, so we can carry all the chocolate home.

Speaking of which, I know everyone always gets a kick out of seeing what we bought, so here’s my haul for the first two days— 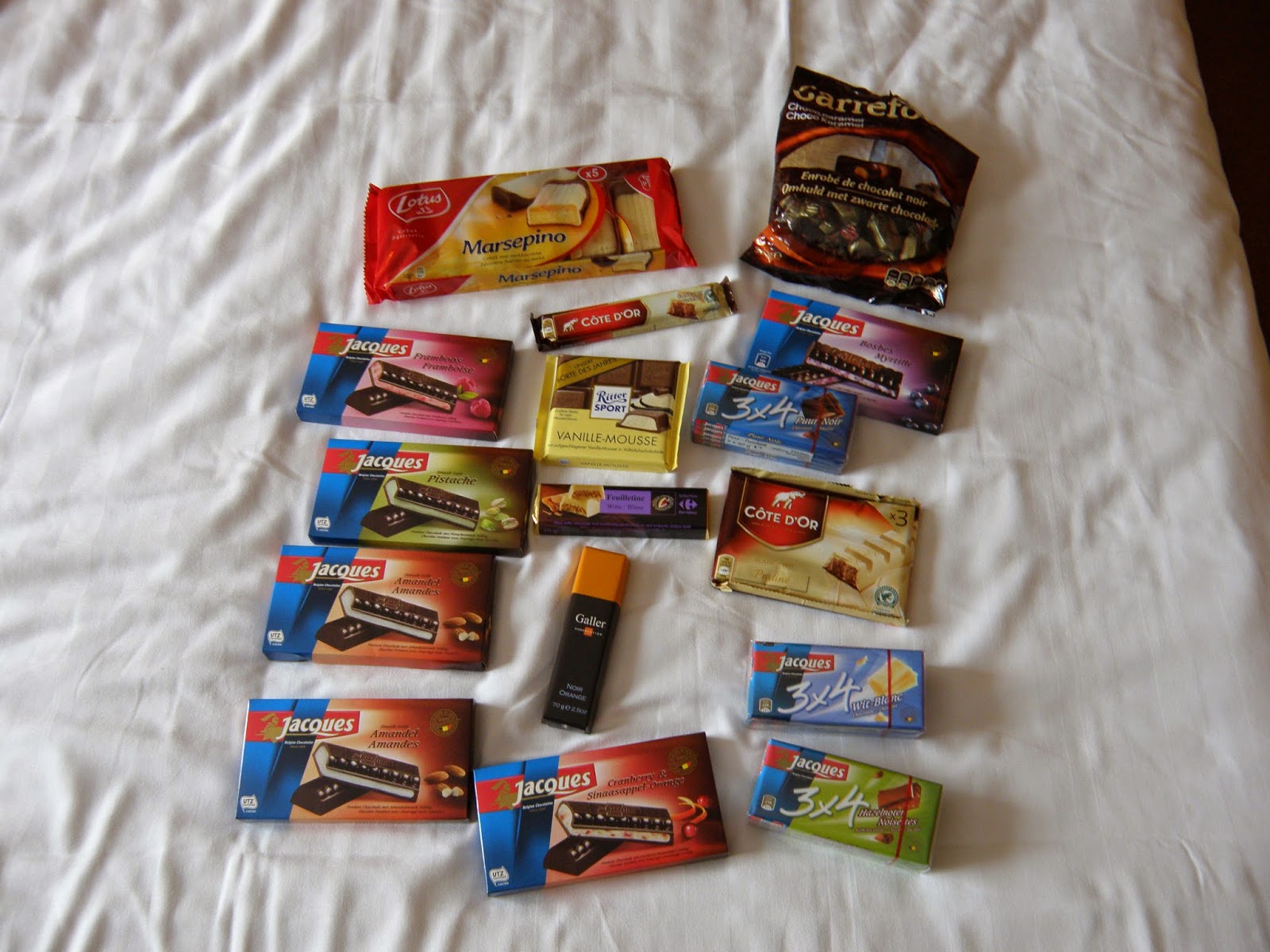 That’s not counting what Loraine bought, and what we’ve already eaten.  And even with that, we still have nine days left to go. What do you think the pile will look like then?

No animal pictures today, so I’ll leave you with business here in Bastogne— 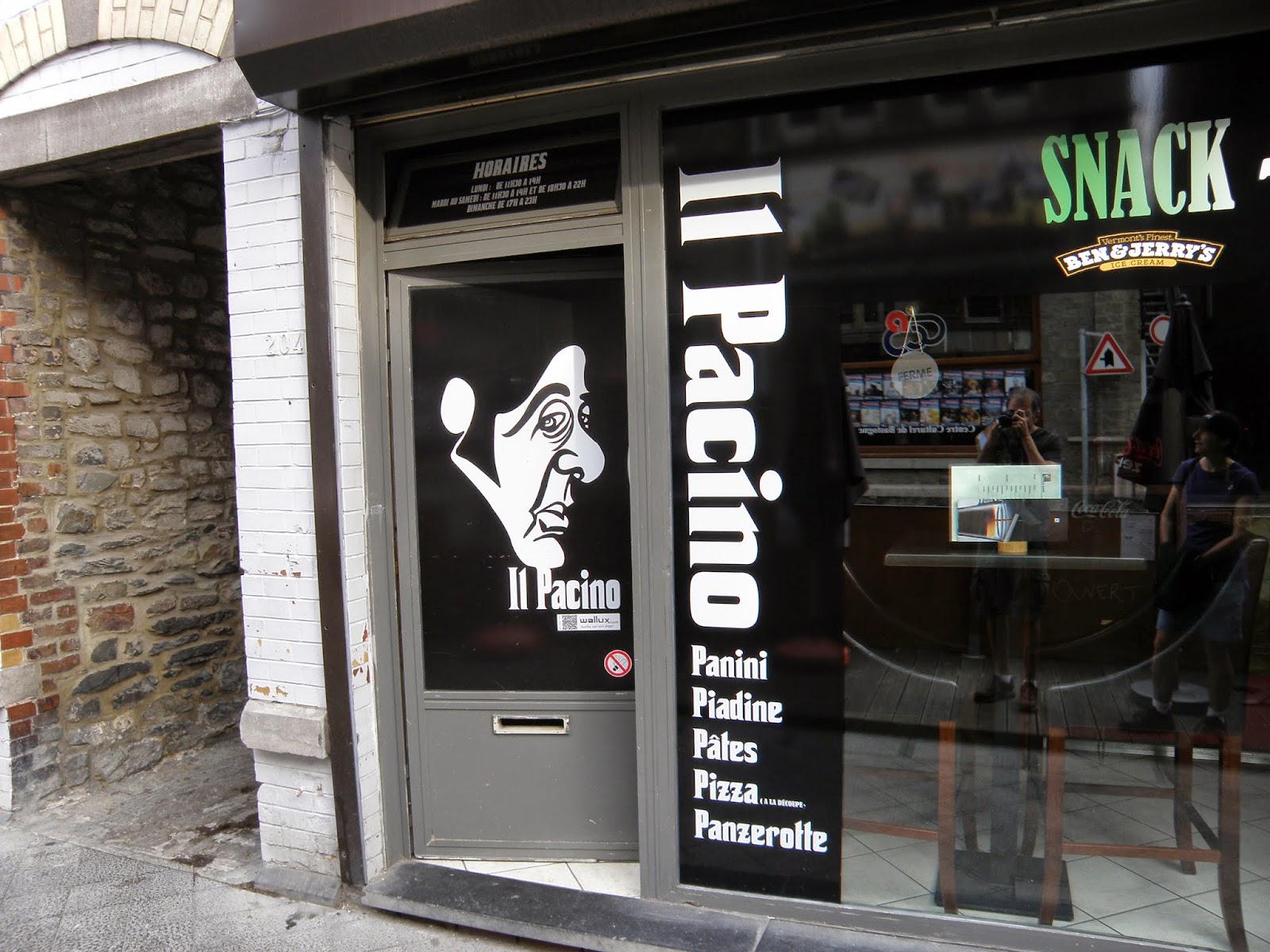 Just when he thought he was out, they pulled him back in again.  And for pizza and paninis, no less!!!