To paraphrase a great English philosopher...”Here we go again”!

We’re heading back to Europe, this time to Germany (with one notable exception) and this time once again in the good company of Tony the Tour Guide (www.alpventures.com).  Since neither Loraine nor I speak much German aside from “Please”, “Thank you”, “Do you speak English”, and my weird ability to count from one to ten, he’s a good person to have along, seeing as how he’s an American who grew up in the country and is quite fluent in the language.

Not only that, but he does the driving, which means I can just sit in the back seat and watch the (German) world go by!

The trip this time will be split into three kind of distinctive parts.  The first consists of us flying over to Berlin, and spending a few days playing tourist.  Planned stops including climbing some kind of tower that’s 26 stories above the city, going to the world’s biggest department store, and visiting a store dedicated to the Ritter Sport chocolate bar.

You know—our kind of store.

The next four days consists of some really intensive research work for Loraine.  Sunday we’re making a day trip in Poland to visit a prisoner of war camp where Edward Aho of Marquette mysteriously disappeared in early 1945.  We’re also looking forward to seeing if we can find the kind of road described several times in Loraine’s Michelin Guide of the country—“Drive four miles down the pothole-filled road”.

That should be fun, shouldn’t it?

Monday, we visit Weissenfels, the town where Elwood Norr of Marquette, the subject of Loraine’s book “Elwood’s War”, was shot down in November of 1944. Here's what it looks like from the air-- 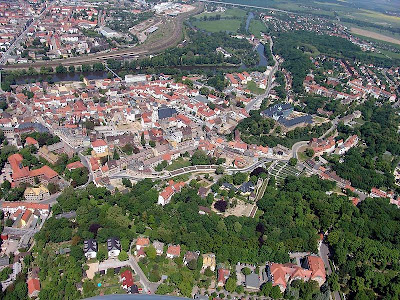 Those of you who read my daily blogs know this should be quite the affair, as we’re getting a guided tour around the battle sites and the city itself, and will be meeting with the mayor of the city, as well.  In return, we’re bringing a letter from our mayor and lots of swag from the Marquette Country Convention & Visitor’s Bureau, so we’re expecting it to be quite the day.  And it’ll probably even more surreal if they have as many reporters as they say they’ll have covering our trip.

Yup...I travel with a woman who inspires press coverage.  What can I say?

(And as an aside, here's a picture of the young man who inspired all this, and a big shout-out to the "Elwood's War" Facebook fan page!) 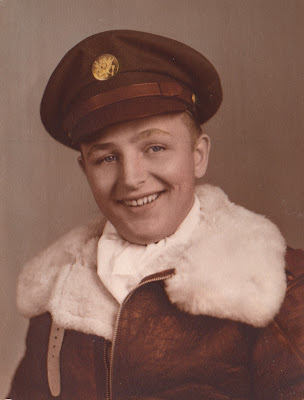 Tuesday, we visit Nordhausen, a place where a great-uncle of mine was part of a unit that helped liberate a slave labor camp, a slave labor camp where they built V-2 rockets. My great uncle took a bunch of pictures of his time there; I'll be sharing more when we're over there, but here's a sneak peak-- 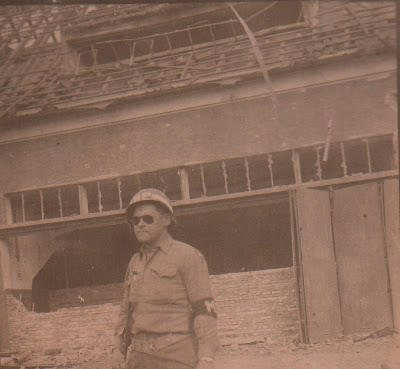 Wednesday, we’re then in Regensburg, where Marquette’s George Kamecki was killed a few days before the war ending in Germany.  We're also staying at a rather cool hotel the day we're there.  Wanna see? 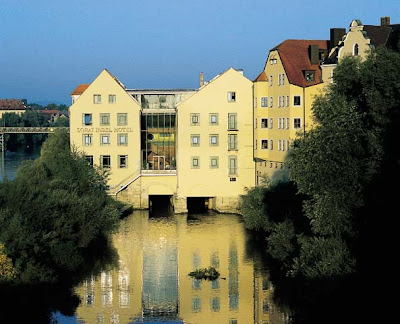 The last few days then find us once again back in Bavaria; Bertechsgaden, to be specific, the beautiful place that’s part of a German national park. 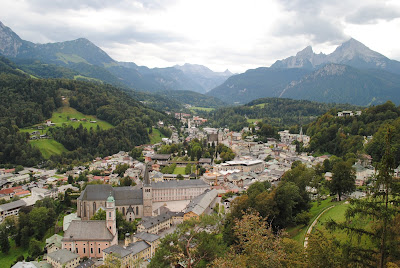 It’ll be the third time there for us; I don’t know that we have any specific plans for that area yet, although I’m sure the days will be packed!

That’s an overview of what we’re doing.  There won’t be an update on Thursday, as we’ll just be hanging around downtown Chicago killing time before our flight to London (and then to Berlin), and I’m hoping there won’t be much to write about.  I am interested to see how it’ll turn out, though.  For the first time we’re flying British Airways overseas.  We’re been on two flights with them before, and I was quite happy with both, if only because they have an extra two inches of legroom in their coach section, at least as compared to American Airlines.  And take it from someone who has freakishly long legs—those two inches make all the difference in the world!

We’ll be back Friday evening (Friday afternoon Marquette time) with the first day’s update.  Keep your fingers crossed my laptop makes it over there in one piece!