Before we go over to my sister’s for the annual Koski family Christmas Eve Celebration of Noise, Loraine and I have a stop we make. And even though there’s a foot and a half of snow on the ground, at least this year, it’s a stop we have to make, because for us, it’s a tradition.

Let me explain a little more--every Christmas Eve, we make a stop at Park Cemetery. Buried there is a young man named Leo Robinson. 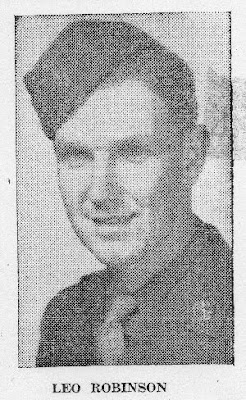 Leo was born in Marquette in 1925, and grew up in Sundell, eventually graduating from (what was then) Eben High School. Like many men of that era, he was asked to join the U.S. Army, and in 1944, was assigned to the 705th Tank Destroyer battalion. His unit was in Belgium in December of that year, and when the Germans launched what became to be known as “The Battle of The Bulge”, Leo was in the thick of it. You see, he was in Bastogne, Belgium, ground zero for that famous battle.

Although Army records are sketchy from those few weeks, we’ve been able to determine that Leo received a leg wound a couple of days before Christmas. It wasn’t serious, but he was evacuated to a makeshift hospital in Bastogne for treatment. Now, if you’ve ever watched the TV show “Band of Brothers”, you know what hospital I’m talking about. It was a set up in a church basement, where a Belgian nurse named Renee LeMaire did her best to help treat hundreds of wounded Allied soldiers brought in, soldiers like Leo Robinson. If you’ve watched “Band Of Brothers”, you also know what happened to that makeshift hospital. It was hit by a German bomb, killing the young nurse, other local residents, and 30 Allied soldiers.

Leo Robinson was one of those 30. He survived his leg wound, only to die when the hospital in which he was recovering was destroyed. 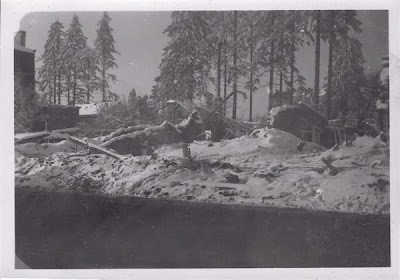 When he died on Christmas Eve 1944, Leo Robinson was 19 years old. He was never able to start any holiday traditions of his own. That’s why every December 24th, Loraine and I stop by and bring him a flower or two, before we head over to our traditional family gathering. 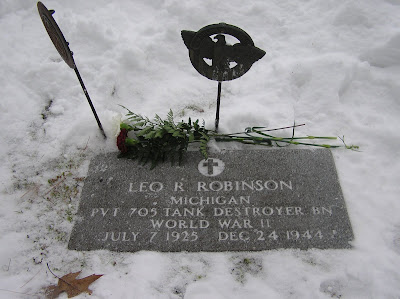 As far as traditions go, it’s the least we can do.
Posted by Jim & Loraine Explore Europe at 12:18 PM