I’ve discovered that I can now drive from Charles de Gaulle airport in Paris all the way to Bayeux without ever once looking at a map or using GPS.  I guess everyone needs a skill in their life, right?  And now I have mine.

Needless to say, we made it here okay.  As with any international trip it wasn’t without its hassles and lack of sleep (8 hours total since I woke up Wednesday morning in Marquette, I believe), but aside from spending half an hour in a seemingly endless line to get through passport control in Paris (and then not even getting our passports stamped!) and waiting almost an hour in the world’s slowest ever car rental line, things went disaster free. Well, there was the German truck driver who tried to cut across three lanes of traffic without looking and almost caused four other cars—ours included—to end up pretzeled together, but other than that it was disaster free.

Speaking of Germans, not only is there a German tour group staying at out hotel tonight, but when we spent the day yesterday playing in the sun in downtown Chicago, trying to kill 8 hours between flights, we were in a Treasure Island grocery store and were talking about German chocolates when a man came by.  He didn’t say anything, but when we ran into him a few minutes later he asked us—in German--if we were from Germany.  Now while both Loraine and I have German blood in us—in her case, almost 100%--we had to disappoint him.  Guess we must just have that air about us, or something.

Anyway, we made it to Bayeux mid-afternoon today, and after checking in at our home away from home—the Bayeux Novotel—we beelined down the Rue St, Patrice— 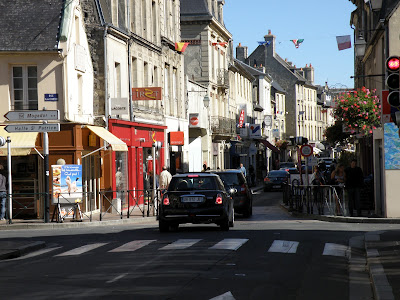 And made a stop at the A la Reine Mathilde Patisserie for a Feuilletine Noir, something we’ve been dreaming about for the 22 months since we were last here— 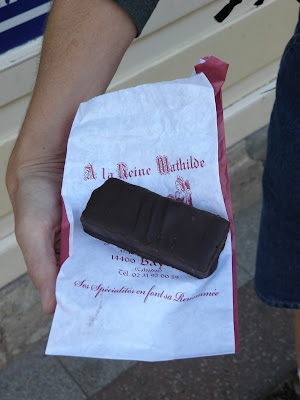 I don’t know how to describe these, except to maybe say that if dark chocolate, crunchy bits, a creamy filling, and one of the best tastes ever to grace the planet had a love child, it would be a Feuillitine.  And I’m thinking it’s a good thing we don’t live in Bayeux; if we did, we’d be eating these every day and weighing about a hundred pounds more than each of us do now.  Of course, for a Feuillitine, it might be worth it!

We were also shocked to learn that our favorite Bayeux grocery store has undergone a massive change.  They tore down the old and somewhat rustic Super U, and replaced it on the same spot with a new modern U Express— 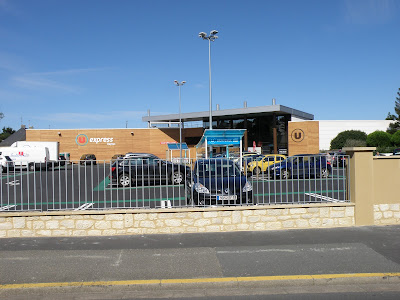 The best part about it?  They’ve expanded their chocolate section.  It’s like they knew we were coming over this month, and worked hard to make sure we’d be happy.  And I think we are!

Because we didn’t do too much other stuff today, I didn’t get a chance to take pictures of any animals, flowers, strange artwork, or even stranger people.  I will leave you with two images, though, the first of which is how each and every pizza place in Bayeux delivers— 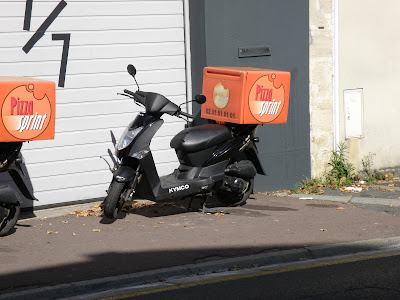 And the second of which is the one place other than a grocery store we visited today.  That’s the Memorial Des Reporters, which is a memorial that’s been put up to honor reporters and photographers killed in war zones— 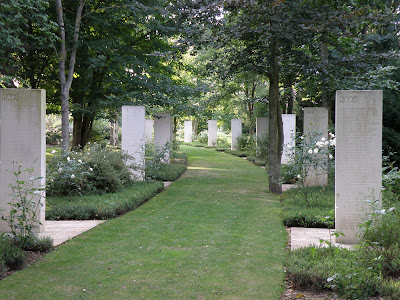 Why is Bayeux home to the memorial, you ask?  Well, I answer, every year they hold an international conference on the subject of war reporting, so I guess it’s just natural.  Every year that add to the list of names, and 2011’s had way too many on them, including Tim Hetherington and Chris Honoros, a reporter and photographer team who worked for everyone from the A.P. and Vanity Fair, and who were killed together last year covering the civil war in Libya.

That’s today; tomorrow, the “vacation” continues with a drive to the west of here, a visit to a cemetery, a climb up a hill, and our third search for a town that doesn’t exist.  Except it does, at least according to both maps and legend.  More on that tomorrow.