A Backpack Full Of "Danke"s

You know your life is taking a surreal turn when you find yourself walking down a dark Austrian alley, trying to find a hole in a wall where an American tank knocked out some bricks while its driver was trying to find a brothel.

In other words, it was a typical day in Europe!

Most of our day today was spent in Salzburg, Austria, where we wanted to visit Market Day (which we did) and find a brothel that Loraine had read about a couple of years ago.  There is indeed a story, perhaps apocryphal, about an American tank driver knocking out a wall in search of some female companionship.  And while we didn’t find a sign of the hole, we did find the brothel— 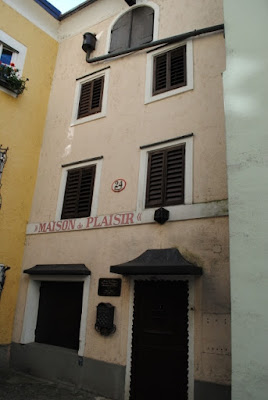 Don’t worry, Mom; this isn’t something we NORMALLY do on these trips.  What we normally do it see sights like this— 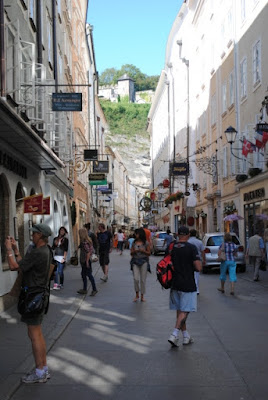 This is the pedestrian street of Old Salzburg, crawling with throngs of people on a typical 90 degree Saturday morning.  Because of the warmth, the market seemed even more hectic than usual, but we were still able to eat a fine and healthy lunch— 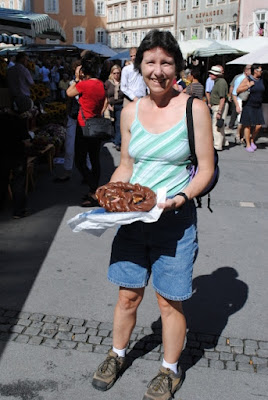 That’s Loraine with a cinnamon roll pretzel covered in chocolate.  And yes, it tasted as good as it sounds.

One of the reasons we like to go to Market Day in Salzburg is because you never know what you’re gonna see.  Here’s proof positive about that—

We checked out a wedding— 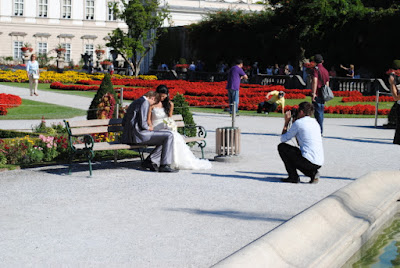 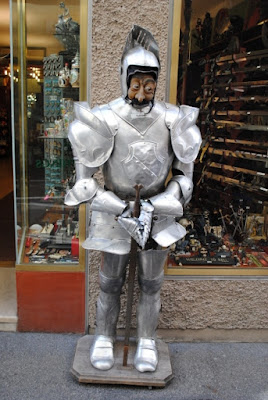 Listened to an oom-pah band— 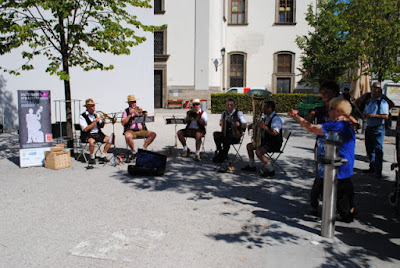 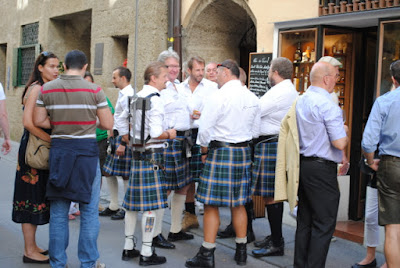 At least, that’s the only way we could explain it.

After leaving Salzburg, we headed up here to the outskirts of Munich, where we currently are, but not before making one last stop, the site of the Dachau Concentration Camp— 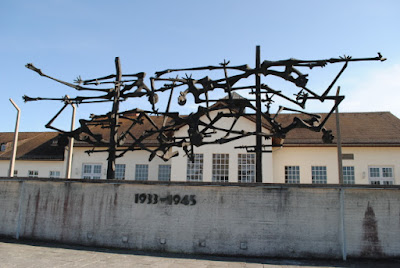 It’s a pretty powerful place...let’s just leave it at that. 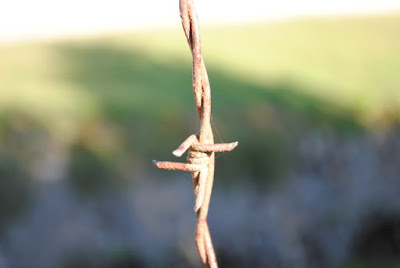 We’re now in the midst of packing to leave VERY early tomorrow.  We have to wake up at 10 Saturday night Marquette time; we’ll (hopefully) arrive back home around 8 Sunday night.  On the plane tomorrow, I’ll write one more blog, and put up a bunch of pictures we didn’t get around to posting yet.  And while I have the chance, I want to thank everyone for all the nice e-mails and comments we’ve received.  We’re glad you enjoyed heading around Europe with us!